The Feast of St. Luke

First the homily and then some photos.

St. Luke the Evangelist
18 October 2011
2 Tm 4:10-17b
Ps 145
Lk 10:1-9
Today we celebrate the Feast of St. Luke—one of my favorite feasts. It is a favorite for two reasons.  First, he is the patron saint of physicians, an honor he was given on very slender evidence that he himself trained as a physician.  The second reason is because of the beauty of his gospel, a gospel that gave us the exquisite canticles we recite daily in the Liturgy of the Hours and the infancy narratives.
We don’t know a lot about him.  He was born of pagan parents and converted to Christianity. He was well educated and wrote excellent  Greek.  We do know that he spent time with Paul, a fact that explains the first reading.  Some scholars suggest that he may have been one of the 72 sent out by Jesus, thus this particular gospel.  What are we to make of these readings?
The first reading is fascinating.  If nothing else it should burst any bubbles that there ever was a golden age in the Church, an age that was unmarked by conflict, duplicity, and disagreement.  We are sinners. We are sinners loved by God but we are sinners nonetheless.  Much of that sinfulness is manifest in betrayal, gossip, lying, and desertion.
It is important to remember that in addition to his gospel Luke wrote the Acts of the Apostles.  Acts is a history of the early Church that reflects the same thing as Paul’s letter to Timothy. It wasn’t always easy. And it isn’t easy in the Church today.  We have a shared mission but we don’t always agree on how to accomplish that mission.  We are not that far from the early Church.
Some of Jesus’ instruction to the disciples seems odd.  “Carry no money bag, sack or sandals.”  Now, THAT is packing light.   The purpose of this  instruction is to emphasize the need for detachment from material things.  Think about it,  we are faster and more agile at the airport when not burdened by several suitcases and a few clothing bags.  When we do not have to attend to our possessions we can be more single-minded and focused on our mission.
“Greet no one along the way.” That seems rude on the surface. But Jesus is again warning against distractions that interfere with the mission.  A quick chat here, a conversation there, then we are late, or so distracted that we forget what we were doing in the first place.  Jesus is impressing on the disciples the urgency of the mission.  Jesus is emphasizeing the need to be single-minded and focused on that mission.  Note that he sends them out ahead of him. That too is unchanged in the modern Church. We are also called to prepare the way of the Lord.
Gregory the Great writes in today’s second reading in the office, “Rightly is it said that he sent them ahead of him into every city and place where he himself was to go.  For the Lord follows after the preachers, because preaching goes ahead to prepare the way, and then when the words of exhortation have gone ahead and established truth in our minds, the Lord comes to live within us. “
And the Lord comes to live within those to whom we have preached, be it in the classroom, our conversation with others, or the example of our lives; a powerful if underestimated mode of preaching.
As today progresses pray the Benedictus, the Magnificat, and the Nunc dimitiis.
And then go out and labor for the harvest.
---------------------------------------
The first photo depicts how I spent my 62nd birthday.  John The and I crossed this "monkey bridge" in the Mekong Delta.  Since we both started on the other side there was only one way I could get this photo.  I had to cross first.  Camera slung over the shoulder and similarly shod in sandals. 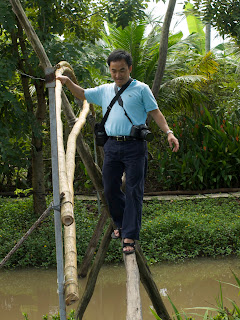 The next was taken just a few hours earlier as we were waiting to leave for this particular expedition.  It shows a reflection of the courtyard of the motherhouse of the Sisters of St. Parul of Chartres in My Thu, Vietnam.  Photos of reflections are a particular favorite thing.  John is visible as the figure in blue at the bottom of the door to the left. 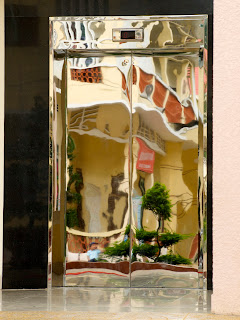 The next is some pottery at the Saturday Flower Market in Taipei.  This was a week after the two photos above. 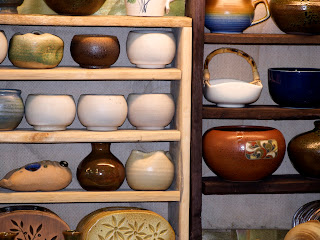 And now back to the U.S.  with a photo taken on an autumn afternoon at Longwood Gardens in Kennett Square, PA.  It is one of my favorite places to go in the autumn in particular to spend a day with the camera.  I learned much about photography there through the instruction of Barry Slaven, a classmate at Temple Medical. 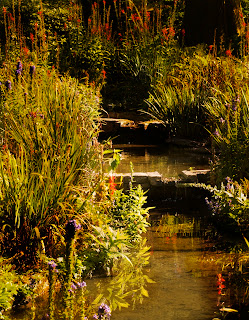 Washington, D.C. is not without its autumnal charm.  This is a photo in front of the Jesuit Residence. 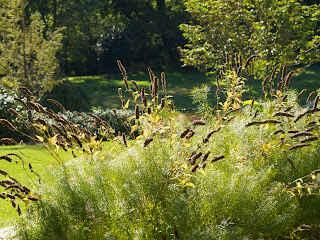 Finally, Milwaukee.  I was in the Midwest to baptize the son of a former resident.  A few days in Milwaukee were a bonus.  Marquette is one beautiful university.  I could easily live in Milwaukee.  Another Jesuit took me to the magnificent art museum and a bit of a tour through the city.  The theme song from Laverne and Shirley became an ear worm for much of the evening.  I did not even try to explain Laverne and Shirley to the Chinese Jesuit with me.  The photo is of the IHS in the ceiling of the Gesu Church near the Marquette campus. 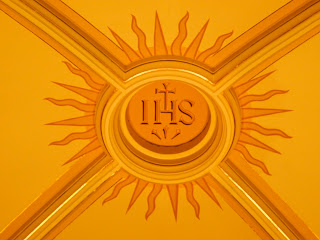 At the moment my plan is to continue blogging with homilies and some photos, both old and ones yet to be taken.
+Fr. Jack, SJ
Posted by Fr Jack SJ MD at 8:51 PM No comments: