I am celebrating the 6:30 AM Mass for the community tomorrow in the main chapel.  Though I've celebrated Gaudete Sunday in Advent several times this will be the first time I vest in dusty rose during Lent.  The principle reason for this is that Laetare Sunday is the date for the annual Rose Mass, a Mass for health care workers.  Ever since ordination I concelebrated this Mass but never had the option to preach.  Last year we were on the long retreat during Lent.  Tertians did not have the option to preach during the retreat.  A pity.  Photos follow the homily.
4th Sunday of Lent (Laetare Sunday)
18 March 2012
2 Chr 36:14-16, 19-23
Ps 137 1-6
eph 2:4-10
Jn 3:14-21
Laetare Ierusalem, et conventum facite, omnes qui dilgitis eam; gaudete cum laetitia, qui in tristitia fuistis . . .
Rejoice, Jerusalem, and all who love her.  Be joyful, all who where in mourning . . . .
Laetare, the first word of the entrance antiphon, gives the fourth Sunday of Lent is name:  Laetare Sunday.  The dusty rose vestments--please note they are dusty rose NOT hot pink--signify a certain lessening of the Lenten austerities.  Lent is now more than half over, a rather surprising fact given how recently we gathered in this chapel for the imposition of ashes.  Yes, we rejoice that Lent is half over--chocolate is on the horizon--but, today's readings give much deeper reason to rejoice.
In its commentary on the first reading The Jewish Study Bible notes that "one of the hallmarks of the Book of Chronicles is its strict notion of divine providence and retribution . . . virtuous deeds lead to reward, while bad deeds bring punishment and suffering."  The commentator notes further that "Chronicles' uniqueness lies in its view of divine compassion or grace as the operative principle."  It is God's compassion or grace that allows for repentance and forgiveness of sin and thus brings the message of eternal hope.
No matter how often the Israelites violated the covenant God forged with them, forgiveness was available.  And so it is for us.  Particularly in the sacrament of confession, we receive forgiveness for our sins again and again.
The responsorial psalms amplifies the calculus presented in Chronicles.
"If I forget you Jerusalem,
may my right hand be forgotten,
May my tongue cleave to the roof of my palate
if I remember you not."
These are harsh words to direct at oneself.  Here the psalmist prays that if he commits evil--in this case forgetting Jerusalem--may he be severely punished.  The punishment which the psalmist is calling down upon himself for the sin of forgetting Jerusalem is that of a stroke on the left side of his brain, the type of stroke that results in paralysis and eventual atrophy of the right hand and garbled speech that does indeed, sound as if the tongue is stuck to the roof of the mouth.  In essence the psalmist is saying, If I forget you Jerusalem may I be struck dead.
John Paul II took the words from the second reading for the title of his second encyclical that was promulgated in November 1980.  Dives in Misericordia or Rich in Mercy.  In this encyclical he explored the divine dimension of the great mystery of redemption.  As he notes in section 7:  " . . . mercy is an indispensable dimension of love; it is as it were love's second name, and, at the same time, the specific manner in which love is revealed and effected . . ."  We have indeed been saved by grace, a fact that John's gospel states without equivocation.
Had I been asked to celebrate this Mass only five minutes before it began I would not have tried to give a make-it-up-as-I-went-along homily on these rich readings.  Rather, I would have suggested that we spend five or so minutes quietly meditating on and, one hopes, being overwhelmed by, the implications of the words, "For God so loved the world that he gave his only Son, so that everyone who believes in him might not perish but might have eternal life."  It is a statement that never loses its power to stun the believer into silence while leaving the non-believer perplexed in the extreme.
It is critical when contemplating these words that one realize that they do not include an exemption from dying.  Rather they overthrow the power of death itself.  As Stanley Marrow explained in his commentary on this gospel, for John, not to believe in the revelation of Jesus is to die, period.  To cease to exist.  He goes on to note that eternal life is the preservation of relationships with those whom we love and those who love us, intact "but without the menacing hands of death."  He does not describe the biology, physics, logistics, or philosophy of what this means for each of us.  That is something that comes under the rubric of faith which Hebrews described perfectly: “Now faith is the conviction of things not seen.”
Laetare Ierusalem, et conventum facite, omnes qui dilgitis eam; gaudete cum laetitia, qui in tristitia fuistis. 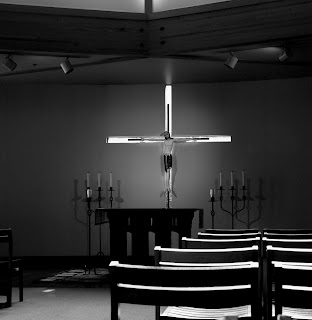 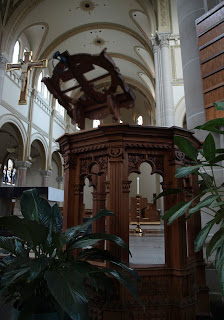 The sacristy is enormous with cowls for each priest.  Most of the priests in the large abbey concelebrate the conventual Mass daily.  Concelebrants are also welcome.  It must take a while to get used to getting that hood on properly.  I always find it a struggle. 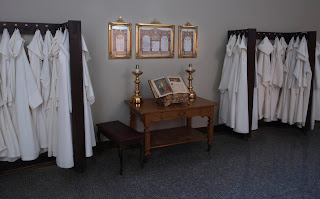 One afternoon I caught this ray of sun streaming across vestments deep in the sacristy. 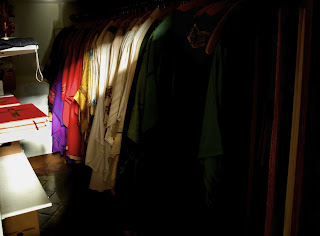 The surrounding grounds are magnificent.  There is also a college on the grounds.   This is the path around one of the lakes in November. 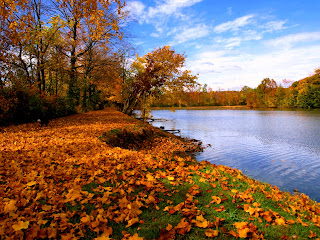 The gristmill still grinds grain into flour.  The wheelbarrow was underneath the mill. 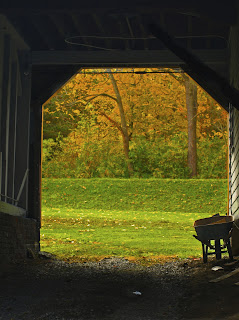 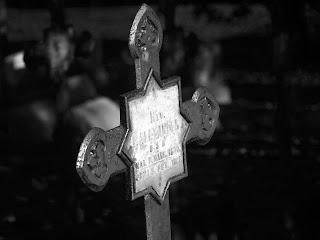 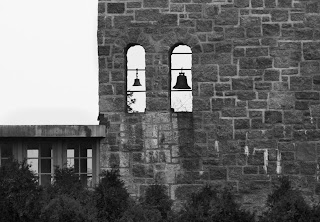 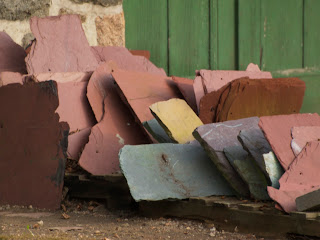 The Atlantic from "the rocks" at Eastern Point 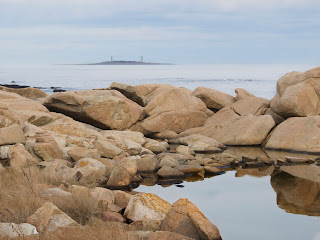 A pool on the rocks at Eastern Point 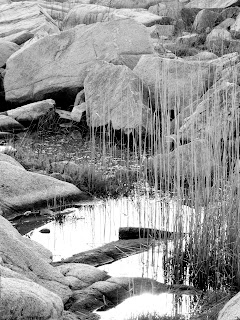 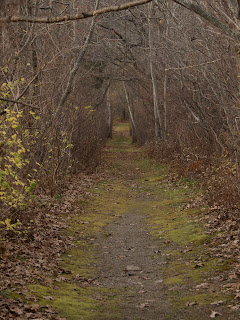 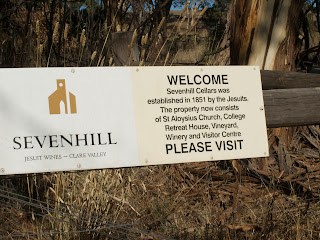 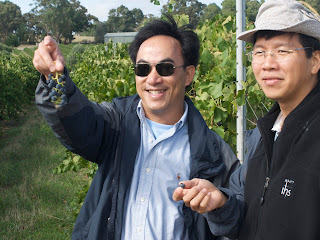 Sampling grapes during the winery tour. 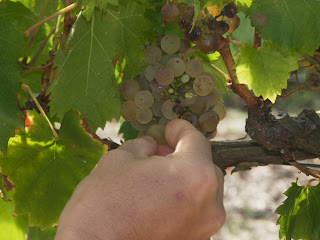 The house in which John The, Simon Wong and I stayed during the long retreat.  We each spent vast amounts of time on the covered porch, each staking out his own favorite territory.  This was mine. 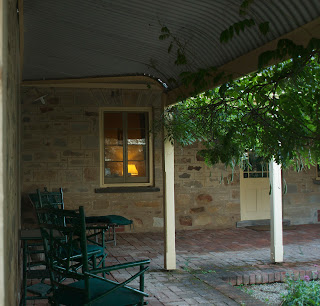 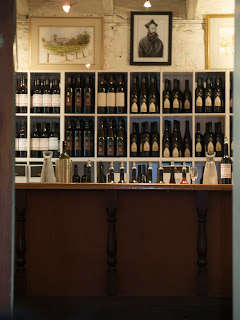 The Yellow Rose of Sevenhill 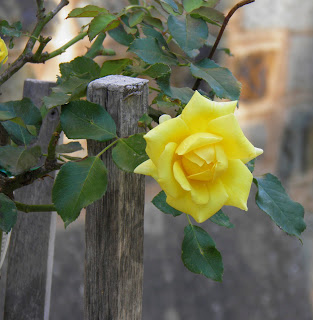 Moonrise as the sun set in the west at Sevenhill. 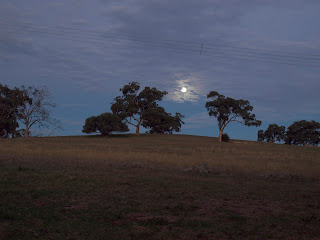 Time to spring the clocks ahead and then hit the rack.
+Fr. Jack SJ, MD
Posted by Fr Jack SJ MD at 9:39 PM No comments: