It has been a while.  The pace here has been busy since early January with many trips into Boston, covering Masses in a variety of places, and giving a day of recollection to the Carmelites of the Aged and Infirm in Framingham.  And a minor bout of food poisoning that, though uncomfortable for about twenty-four hours did not approach the agony of norovirus last year.  Just saw a note on the ABC news webpage about a gastrointestinal illness affecting over 250 people on a cruise ship.  I cannot imagine being that sick in a tiny stateroom bathroom.

In the essay introducing the Book of Isaiah, the Jewish Study Bible notes:  "Isaiah is perhaps the best-loved of the prophetic books.  It is cited more than any other prophetic text in rabbinic literature."  One can say something similar about the role of Isaiah in the Catholic Church.  The challenge over the centuries
(Isaiah lived in the last half of the 8th century B.C.) is the meaning of the text.  Was Isaiah speaking of Christ?  Was he speaking of someone or something else entirely?  One's religious biases, prayer, and contemplation will determine one's answer in part.  Biblical scholars are all over the place on this one.

In the commentary from the same source, on the verses just read, there is an interesting explanation of the name Isaiah.  "Semitic names often consist of sentences that describe God; thus the name Isaiah in Hebrew means, "The Lord saves."  The commentary goes on to explain why Isaiah used the past tense in the verses.  Recall we heard:

"The people who have walked in darkness,
have seen a great light;
upon those who dwelt in the land of gloom
a light has shone.
You have brought them
abundant joy
and great rejoicing."

One way to look at the use of the past tense in verses that the Church understands as speaking of Christ is what is called "the prophetic past."  Remember, these verses of Isaiah were written approximately 800 years before Jesus' birth.  How then could Isaiah have been speaking of Christ?  Using the past tense to describe the future is one of the ways.

The prophetic past predicts future events using the past tense because those events are already as good as done.  The prophetic past tense is rooted in the faith and hope that what we ask of the Lord, and what the Lord has promised, is as good as done, even if the present is not as we would want it to be, even if the present bears no resemblance to what God has promised.

Paul was not happy with the Corinthians when he wrote his first letter to them.  He was writing about abuses that had found their way into the Church at Corinth.  Paul discusses these abuses from chapter one through chapter six of his letter.  The abuses included: divisions among the faithful, a case of incest, lawsuits among Christians, and sins against chastity.  Not too much different from today.

"I urge you . . . in the name of our Lord Jesus Christ, that all of you agree in what you say . . . that you be united in the same mind and the same purpose."

In writing this Paul is not suggesting that Christians cannot disagree on earthly affairs: politics, gun control, or the Patriots vs. the Jets are fair game for disagreement.  Paul is referring to the unity of the Church.  He is referring in particular to unity in understanding the foundational dogmas of the Church.  The kind of sectarianism against which he railed: I belong to Cephas, I belong to Paul, is a sectarianism that implies different understandings of Christ. This is dangerous and divisive.  Alas, we have to contend with it daily.

Matthew's Gospel recounts the calling of the apostles.  The story is simple on the surface. It is terrifying in its implications when one parses out the meaning of being called by God.

In Xavier Leon-Dufour's Dictionary of Biblical Theology one finds the following:  "A calling supposes a change in being since God's call catches a man at his ordinary work, interrupts him in the midst of his friends, and involves him in a project known to God alone."  That description certainly fits the Gospel just proclaimed and what we know transpired after the apostles accepted Jesus' summons.

There they were, Peter, Andrew, James and John, working as fisherman.  Hauling in the nets, perhaps grumbling a bit about the quality of the catch. Their backs were sore. Their fingers ached. They were probably cold and wet. And then they heard Jesus: "Come after me."  Come follow me.  "And I will make you fishers of men."  That last is not a very specific job description.  And so it is for us.  When we accept Jesus' call to us, we are beginning a project that doesn't have a very detailed job description, . . . if it has any.  But it was through this kind of call that Jesus surrounded himself first, with the apostles and then, as we will hear in Gospel narratives throughout the year, others who were called to be disciples.  Some accepted in the spirit of the apostles:  immediately and without equivocation.  Others rejected the call.  Others rejected the invitation to follow Christ, sometimes for the flimsiest of excuses.

To be called by Christ is to be called into His mission.  This call is mediated by the Church not by one's own whims and desires of the 'I-don't-need-a-Church-to-tell-me-how-to-follow-Jesus' variety.  Or the cafeteria variety, 'I can accept that Jesus was the Christ but I really can't believe that stuff about the real presence.'  The Church is not perfect.  At times it has to deal with the kind of sectarianism decried by Paul.  It is, after all, a Church made up entirely of sinners.  However, it is what has come down through the millennia preaching the salvation found in Christ.

Our own prayer for today should be taken directly from the responsorial psalm:

"One thing I ask of the Lord,
this I seek:
to dwell in the house of the Lord
all the days of my life,
that I may gaze on the loveliness of the Lord
and contemplate his Temple"

The first is a ceramic Jesuit seal mounted on a stone wall in the middle of a trellis. 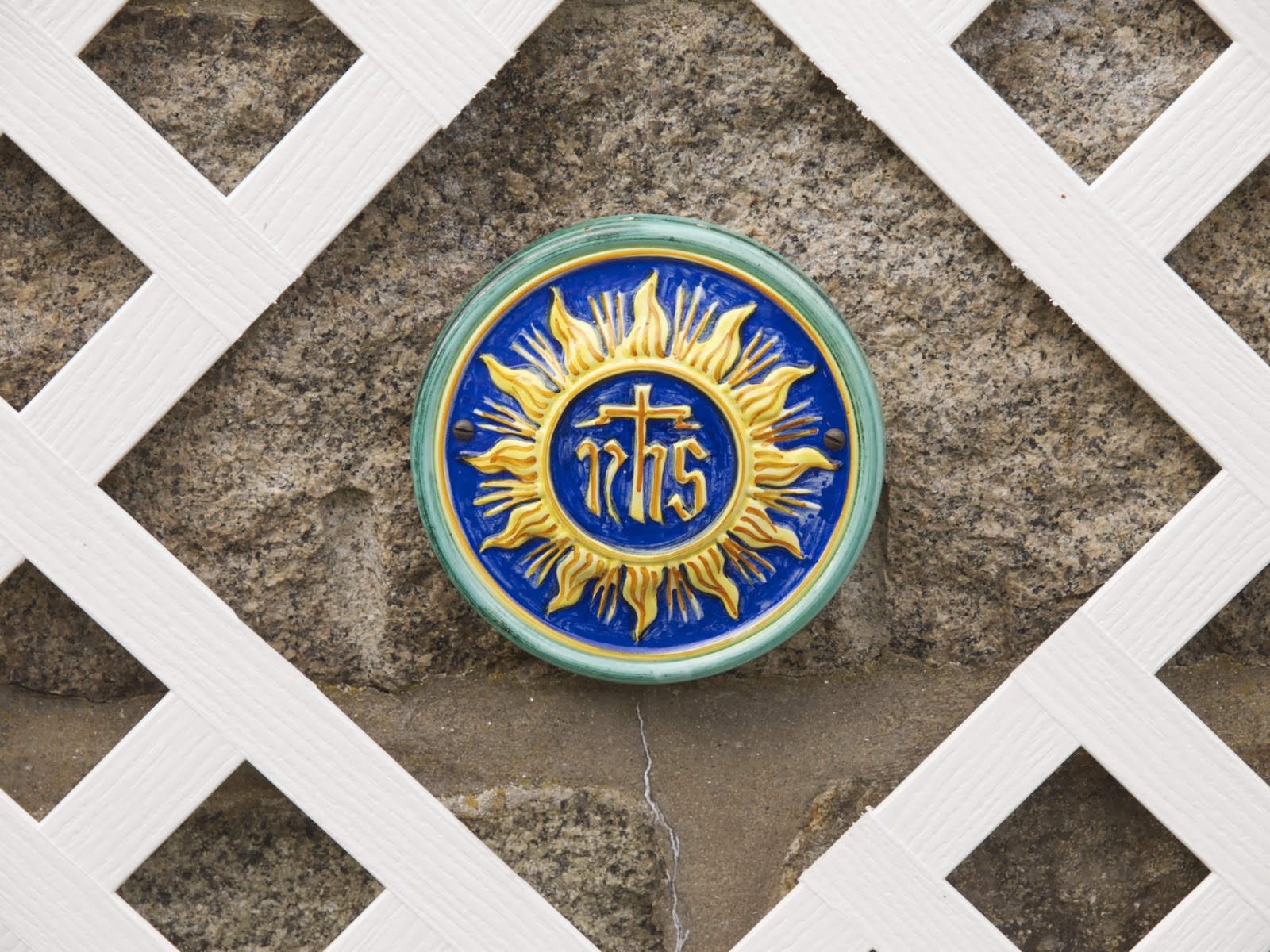 The next is strips of cloth and ribbon on a wall-hanging in the house.  The vibrant colors caught my eye.  The beige stone in the background is an interesting contrast. 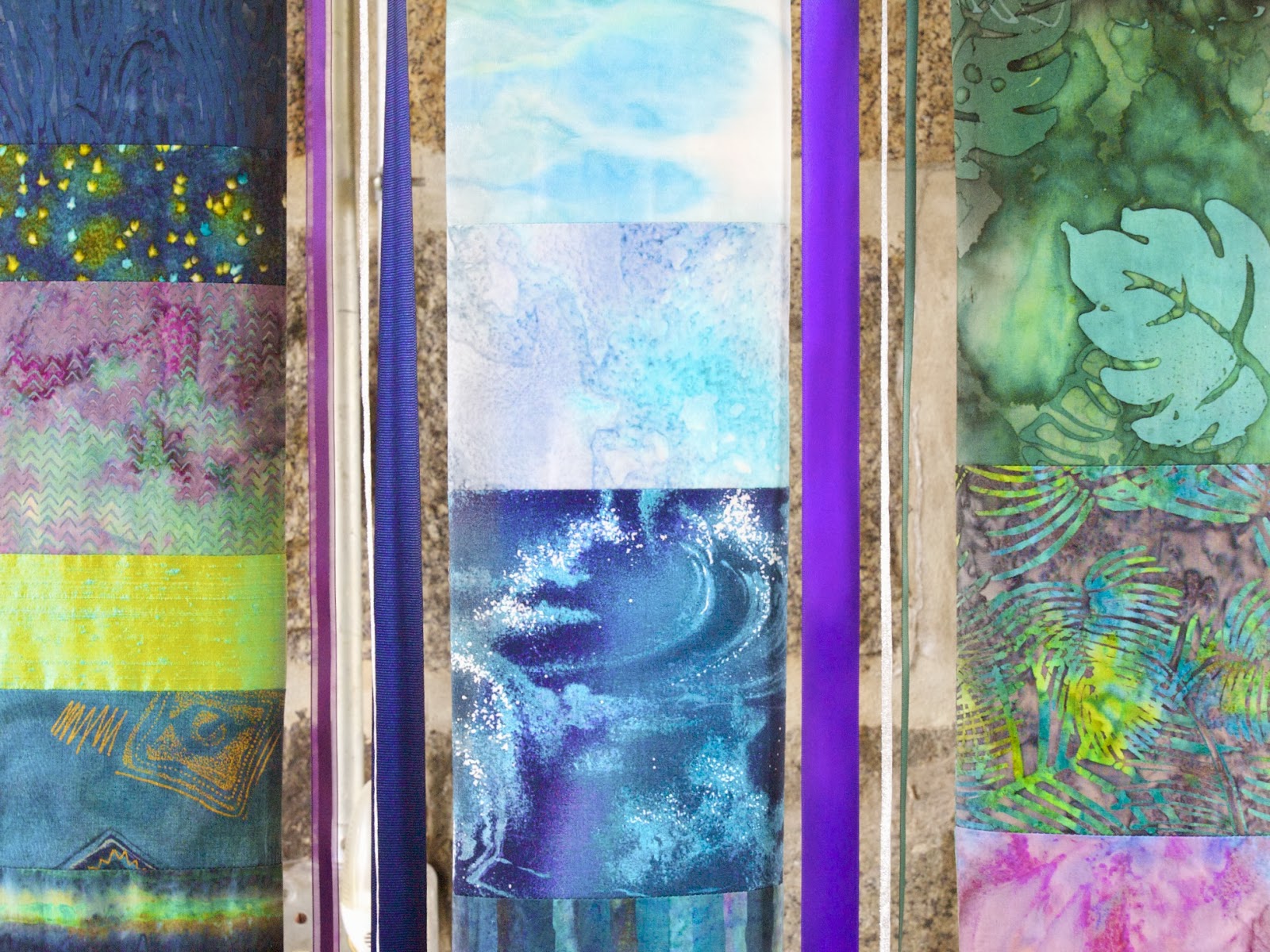 The two chairs that look out onto Brace's Rock are frequently occupied by silent retreatants.  Sometimes they are writing in their journals. 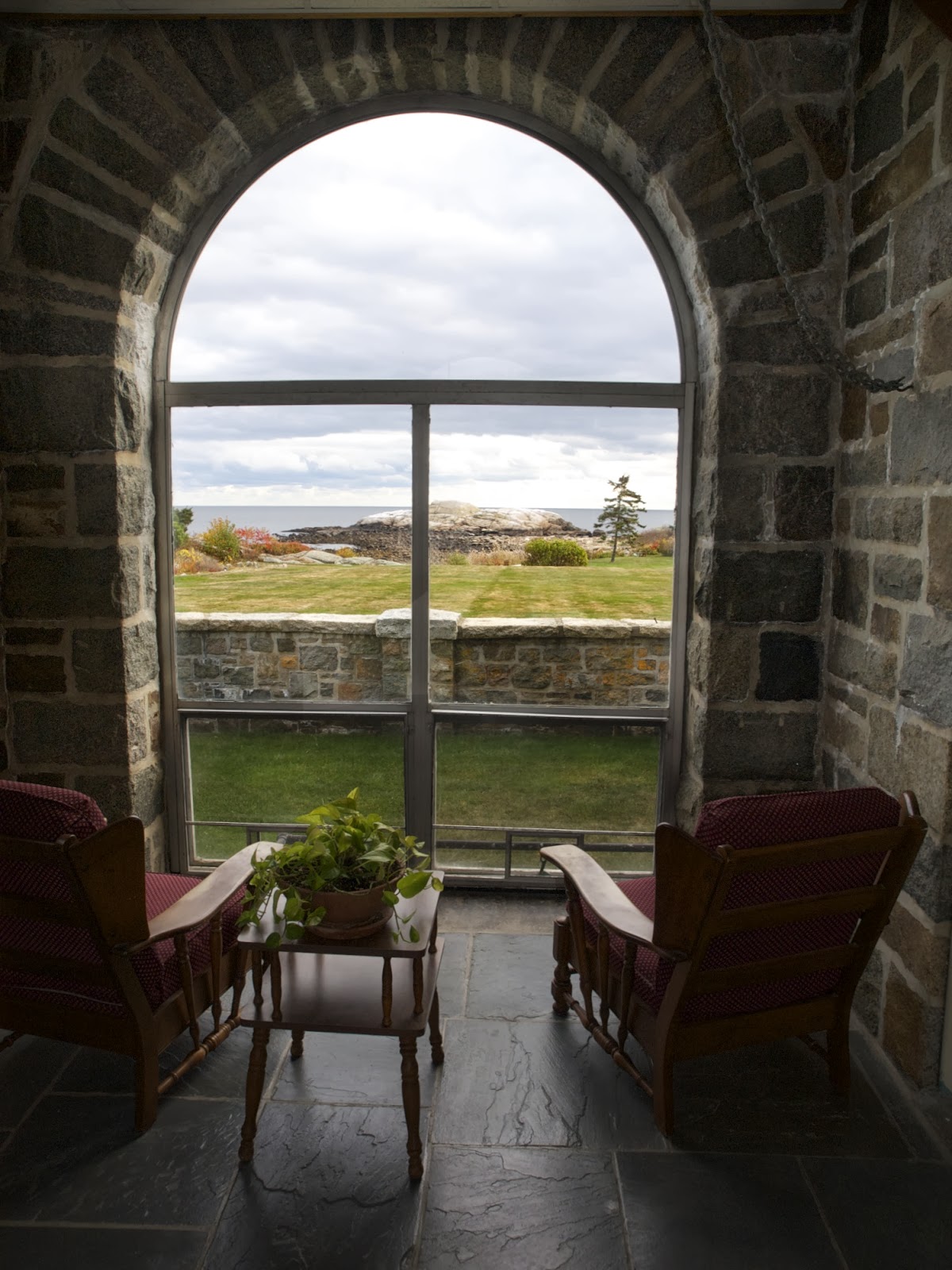 There are Adirondack chairs scattered all over the property.  Lovely to look at they can be a challenge to get out of, particularly for the elderly or those with any sort of lower-body weakness. 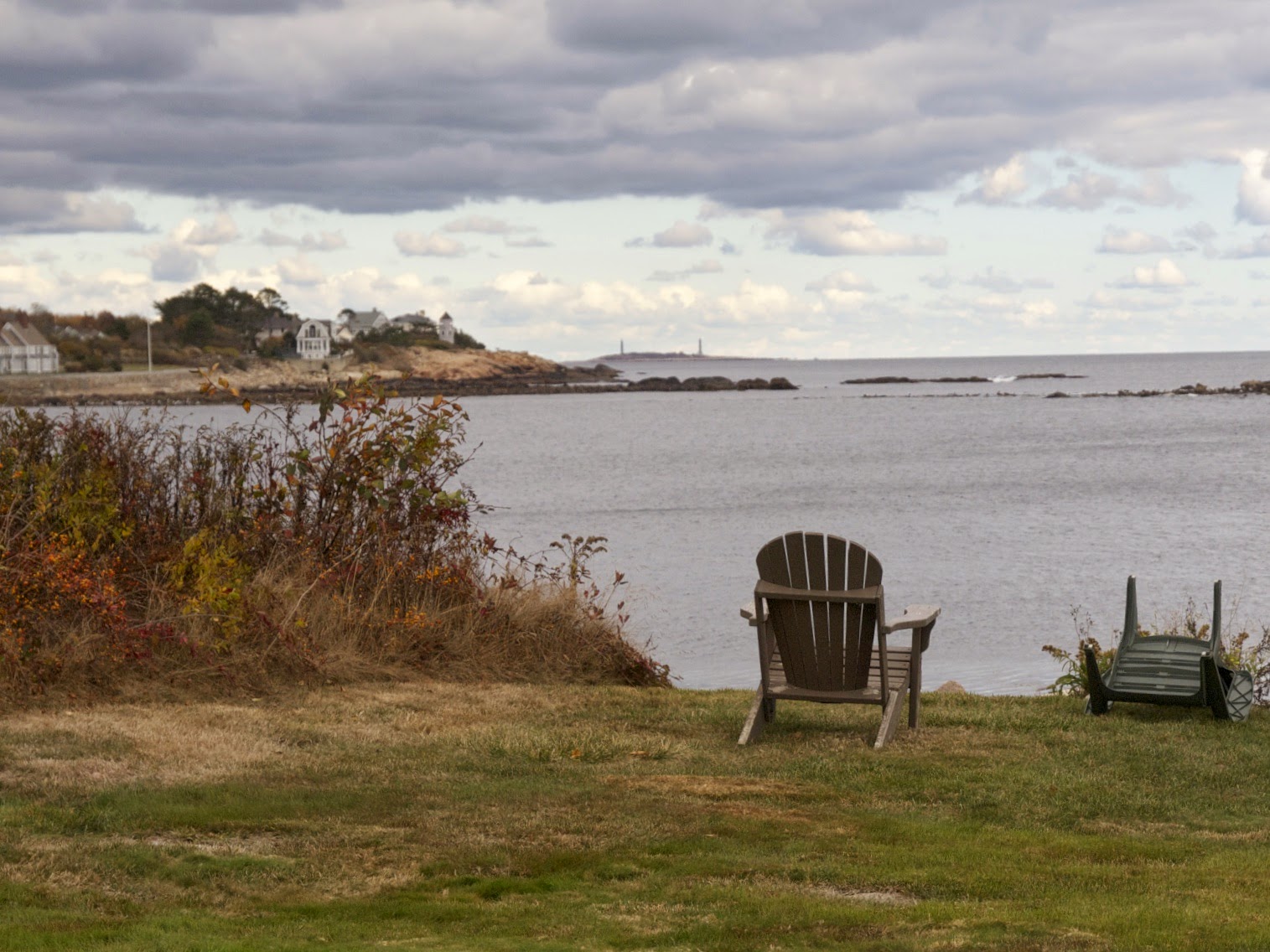 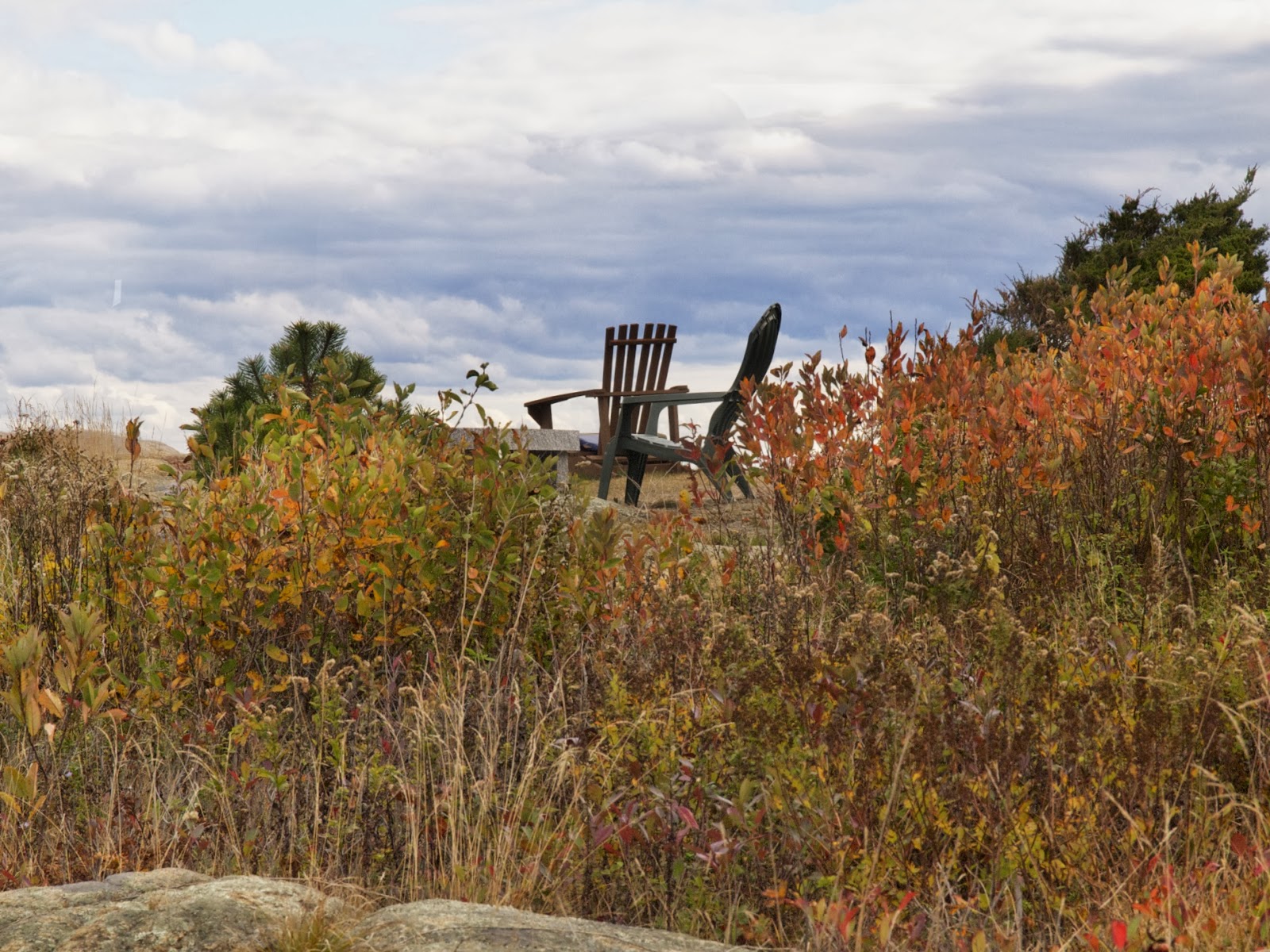 I hope to get up there one of these days when the temps are not so low as to possibly damage the camera.

The original plan for today was to celebrate 9 AM Mass down at St. Zephiran Church in Wayland, about five miles from here.  However, the snow began this morning.  Perhaps I could have made it but Mass was canceled.  I wasn't eager to try to get there and was thus relieved.  There is no way anyone will go to Mass tomorrow.  Predictions range from 10 to 18 inches with the snow ending at noon.  The winds are fierce so that there will be drifts as well.  Am scheduled to go to St. Zephiran next Thursday and Friday.  Perhaps it won't snow.  The homily below was the one I prepared for tomorrow.  Then the photos.

The gospel reading today continues where yesterday’s left off, with John the Baptist in the Desert, announcing Jesus in his role as “a voice crying out in the wilderness.”  It recounts Jesus’ baptism

The description of Jesus’ baptism in John’s Gospel is different from the other three gospels.  There are many points that are the same but what John did not include was a description of the baptism ritual itself.  At some point during this particular passage one realizes that John baptized Jesus but the baptism is not explicit.

More important than the details of the baptism is the significance of that baptism.  Looked at in this way this gospel almost overwhelms with material for meditation.  The last sentence alone, “Now I have seen and testified that he is the Son of God” has resulted in thousands of pages trying to understand what “the Son of God” means.

One thing is so obvious that most of us never think of it.  Jesus bore no outward distinguishing mark. There was nothing about Jesus that set him apart from any other man of his time.  Certainly there was no halo or aura of light emanating from him, as depicted by artists through the centuries. Jesus was not recognized as “the one who will baptize with the Holy Spirit” by how he dressed or carried himself.  He was fully God and fully man to be sure.  But people walked past Jesus daily without recognizing him and without knowing him, just as we can go through our daily lives without knowing Jesus or recognizing how he acts in our lives.

We are coming to the end of the Christmas season, the season that commemorates Jesus coming to this world as flesh and blood.  Sunday is epiphany followed a week later by the Baptism of the Lord, which will be described in Matthew’s Gospel—pay attention to the differences compared with the Gospel this morning.  And then the Christmas season is over.

Lent will be here soon but for now we still sing Gloria in Excelcis Deo.  Christ is born.  It makes sense that the psalms today instructs us to:

Sing praise to the Lord with the harp,
with the harp and melodious song.
With trumpets and the sound of the horn
sing joyfully before the King, the LORD.
___________________________________________________________
It was a privilege to have two of my photos used for the community Christmas cards.  Over the past two days I spent at least 8 hours in the chapel here taking photos for next year's cards.   The photos below reflect some of that work.  Most of them were long exposures ranging from 20 seconds to more than a minute (none of the very longest ones appear below).  While the black and white one will not be a Christmas card I am more than pleased with it.  A lot of smoke appeared after the 18 candles were extinguished yesterday morning at about 10:30 or so.  There was no time to grab the tripod because the smoke was dissipating.  So, I jacked the ISO to 500 and shot followed by a lot of post-processing.  No commentary on each one. 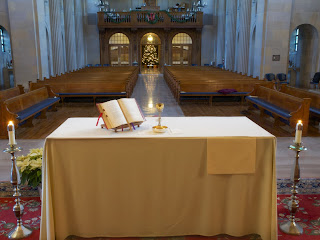 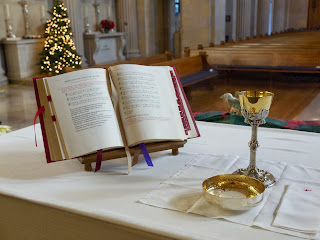 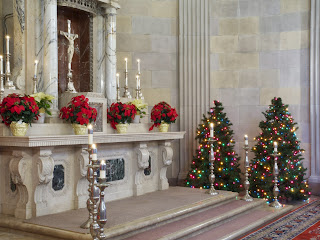 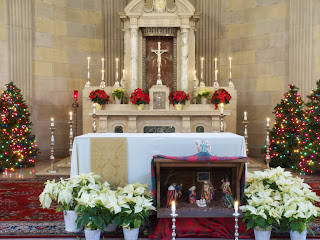 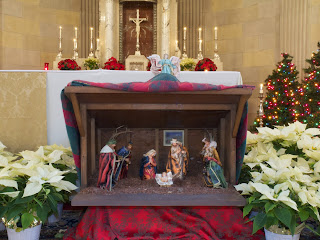 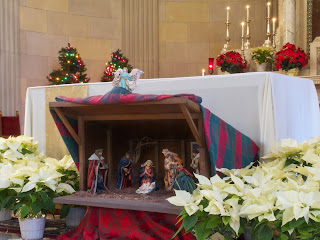 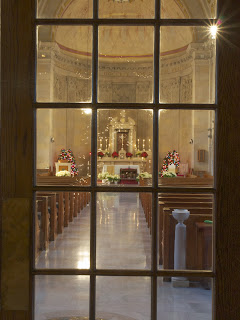 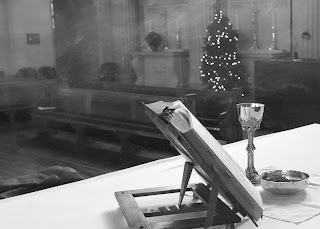