At the cross her station keeping
stood the mournful mother weeping
Close to Jesus
to the last.

Crucifixion was a shameful, cruel and horrifying means of death.  But the cross was, the cross is, the cross always will be, the instrument of our salvation.

Throughout this Holy Week we are called to meditate on the passion and to remember Jesus’ great act of love.  We can only stand at the foot of the cross and gaze at the crucified Jesus saying:

Lord, I am not worthy.
______________________________________________
After the 10:00 AM Mass I wandered through the chapel with camera and tripod.
The sacristies are among the most fascinating of places.  The one on the right is full, though less so after some rearranging, of the various things needed for Mass or other liturgies.  Last week Ignatius removed the wax from the candelabras, a most appreciated effort. They are now ready for Holy Thursday. 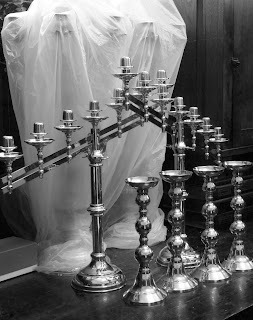 Across the sacristy one finds some odds and ends not currently in use. 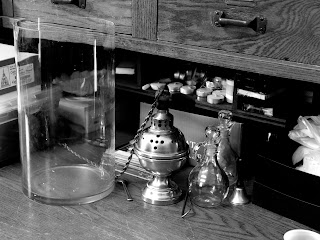 The above photos are from the sacristy on the right.  The sacristy to the left of the altar is where the priest vests.  The red chasuble is hanging, ready for Mass this morning. 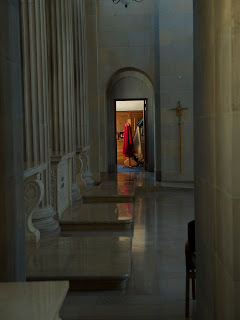 Palms arrayed at the back of the chapel. 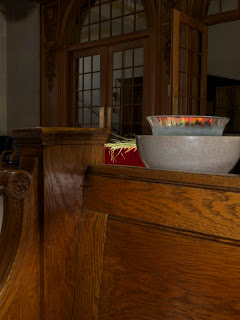 The view from the right sacristy toward the back of the chapel. 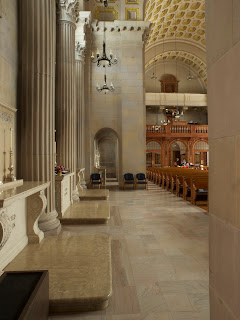 A detail of stained glass just outside the left sacristy. 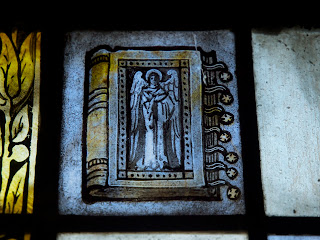 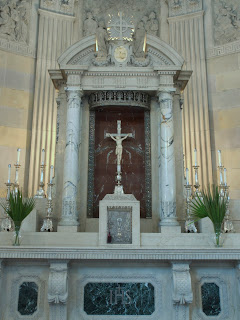 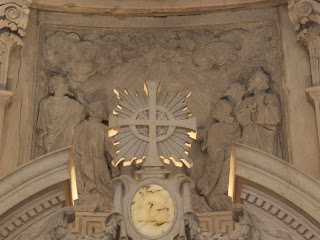 The Pope and St. Joseph

It was a WOW moment.  A week ago I was sitting at the dining table in a small community near Boston College waiting to retrieve a Jesuit back to Campion.  With two hours to kill it seemed reasonable to work on a lecture.  Opened computer and decided to check on the status of the smoke.  WHITE.  OK, I'll start to work on the lecture once the new Pope is announced.  Then came the announcement.  A JESUIT!!!!!  I went out of my seat with the kind of energy usually reserved for Penn State touchdowns in big games.   That was the end of the lecture prep.

It is still a wow.  I was thinking this morning that the Pope and I have a few things in common.  We both made the Spiritual Exercises of St. Ignatius.  More remotely, there was a day when we realized our vocation to the Society and there was the day we walked into the novitiate, approached the altar two years later to pronounce vows and then continued with formation.

Matthew’s account of the events leading up to Jesus’ birth is less detailed than Luke’s.  It is also lacking the splendid prayers we hear in Luke.  But, Matthew’s narrative is brimming with human drama and pathos.  We learn of Mary’s fear.  And we are told of Joseph’s consternation that caused him to plan a quiet divorce.  Joseph’s anxiety and concern were put to rest by the angel who appeared to him in a dream, “She will bear a son and you are to name him Jesus, because he will save his people from their sins.”

Mary’s yes at the Annunciation, “Let it be done unto me according to your word,” changed the history of the world.  The sound of that yes continues to reverberate throughout the universe up to the present moment.  And it will do so for eternity.

Joseph’s yes was silent. It was no less important.  It too continues to echo through the universe.  But it does so as example rather than sound.  Joseph was righteous because, like Mary, his obedience to God was immediate and unquestioning.  Later an angel would again come to him in a dream. In his obedience, in his role as protector of wife and child, Joseph would take his young family to Egypt for an extended exile that would last until Herod’s death.  The trip from Nazareth to Bethlehem was not easy.  The trip to Egypt was probably even more difficult.

The Holy Father commented on Joseph in the homily at his inauguration this morning, "How does Joseph exercise his role as protector?  Discreetly, humbly and silently, but with an unfailing presence and utter fidelity, even when he finds it hard to understand."

The snow from a fourth floor window at Campion. 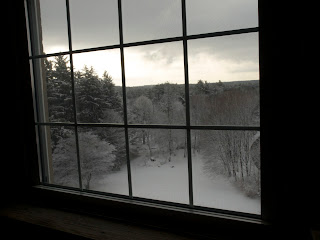 The snow contrasts with the rain soaked rose during the long retreat (two years ago now) at Sevenhill. 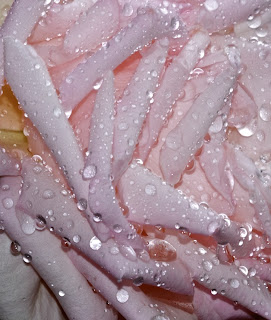 Feeding pelicans fish guts in Port Lincoln.  I was fascinated watching the birds catch the offering the fisherman tossed into the air for them.  They were swarming around. 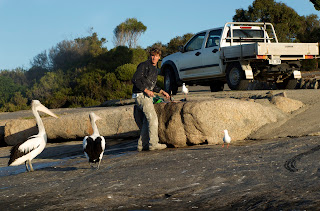 Apples at the Victoria Market in Melbourne, Australia. 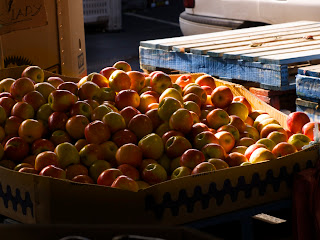 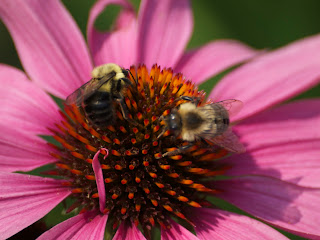 Frosted glass in Clare, South Australia taken on a break day during the long retreat. 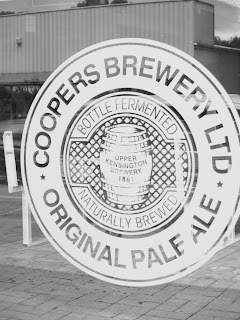 And finally, the ceiling at a temple at Sun Moon Lake in Taiwan 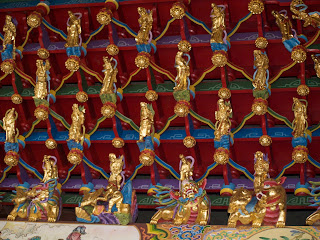 Got back from retreat last night.  Went to the College of the Holy Cross to stay in the Jesuit community.  It was a good retreat enhanced very much by the setting.  Prior to this I only spent a total of 6 days at Holy Cross in 16 years, three of which were the triduum before first vows.  Our timing was good in that it was spring break meaning that campus and the community were both very quiet.

Holy Cross has interesting geography.  Beautiful campus built into the side of a steep bluff overlooking Worcester.  Holy Cross students don't have to go to the gym to stay in shape.  All they have to do is go to class.  I've never seen so many sets of stairs built into hillsides.  This is one steep campus.

The retreat ended on a high note.  What was supposed to be a few inches of snow turned into 28+!  Weston got 20 and Boston a bit over a foot.   By Friday night the skies were clearing and then Saturday was glorious.  Because I could not find my tripod prior to leaving Boston there are few pix inside the chapel (found it upon returning home).  All in all a good retreat.

Celebrated Mass this morning for the first time during the sede vacante.  Definitely required concentration to skip the line about the pope during the Eucharistic Prayer.  Probably won't be much easier inserting a new name in a few days hence (one hopes).

Homily followed by photos from retreat.

“Rejoice Jerusalem, and all who love her.
Be joyful all who were in mourning
exult and be satisfied at her consoling breast.”

Lent has passed the mid-point. The penitential sense of the season recedes just a bit.  It is a chance to catch our breath, a chance to look back upon our observance of Lent thus far and to prepare for the commemoration of  Jesus’ passion, death, and resurrection.  All three of today’s readings juxtapose rejoicing and forgiveness, particularly the first reading and the familiar Gospel parable of the Prodigal Son.

The Israelites had reason to rejoice.   Having ended thirty days of mourning after Moses’ death, Joshua led them into the Promised Land, toward which they had been moving for forty years.  “Today I have removed the reproach of Egypt from you.”  Their punishment at an end they ate a Passover meal from the produce of the land they had been given.  They no longer needed the manna with which God had fed them on their journey.  It never appeared again.  They were home.

The parable of the prodigal son is more than simply familiar.  Along with the Good Samaritan, the prodigal son has transcended its roots in Luke’s Gospel to become a figure of speech that is used and understood by Christians, non-Christians, and even those atheists who are hostile to all things smacking of faith.

The prodigal son is a challenging parable.  It can be read and analyzed on many levels.  It is rich with characterization, motives, actions and reactions.  Psychiatrists can have a field day treating this gospel as a case study evaluating the personalities  and behaviors of the various actors in the drama.

We may see ourselves if we meditate on the story.  Perhaps we want the immediate gratification of the younger son. Maybe we identify with the fury and resentment of the dutiful elder son who perceived that he never had any fun.
We may even see some identification with the local citizen who said, “Sure kid, slop the hogs.  But don’t eat any of the slop.”  We probably all can identify with the prodigal’s regret at having followed a wrong path, at having chosen stupidly.   The hookers and hangers-on were there when the money flowed.  But they were gone when the cash dried up.

The greatest importance of the the parable of the prodigal son, however, is not as a social or psychiatric case study.  This very familiar parable  reveals the depth of God’s love and mercy for us.  It reveals God’s forgiveness once we have confessed that we are sinners in need of that forgiveness.

The father loved the son enough to let him go out on his own, well financed and provisioned.  The rest was up to the boy.  The son rejoiced in his new freedom, not unlike a kid moving away from home for the first time.  Finally he could  carouse, party,  make noise, and sleep around.  And he did.  The money was gone fast.  Only when he hit rock-bottom did he yearn for his father’s love.  Only when broken and wretched did he want to return to the safety of home.  Having squandered all he had been given, he swallowed his pride, admitted his wretched state to himself and journeyed back, prepared to be treated not like a son, not like an heir, but as one of the hired help.  But at least he would be able to eat.

The prodigal did not know how desperate his father was for him to return. He had no idea how his father would rejoice when he began his journey home.  The son had been lost and now was found.  Like the Israelites, he was home.

As is often the case in Jesus’ parables, the story does not have a definite ending. There is no resolution or happily ever after.  This parable, like many others, is like seeing only two acts of a three-act play, or finding that the last chapter of an Agatha Christie who-dunnit has been ripped from the book.   We don’t know how the prodigal son acted once he returned and was back into the routine.  We don’t know if his angry older brother reconciled with him.  All we know is that his father forgave him.  And welcomed him back.

God endowed us with free will and allowed us to go out on our own, well-financed and provisioned.  Like the prodigal son we mess up to the point of desperation and despair.  But like the father in this parable God forgives us and welcomes us back again and again, more effusively than anything the prodigal’s father could have done, once we admit our need for His love, confess our sins, and amend our lives.  Thus, Paul can confirm, “God has reconciled us to himself through Christ and given us the ministry of reconciliation, namely, God was reconciling the world to himself in Christ.”

Rejoice Jerusalem . . .
Be joyful
All who were in mourning
_________________________________
The stained glass in the Jesuit Community Chapel is beautiful.  The colors are very saturated, more so than the camera (or some toying with Aperture 3 can make them).  When the sun is coming through the windows  the chapel is flooded with warm color.  The first photo is a close up of the window behind the altar while the second is a wide-angle of the chapel. 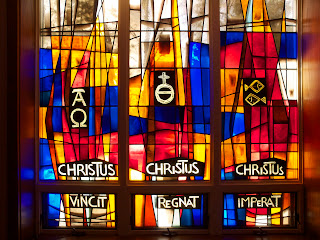 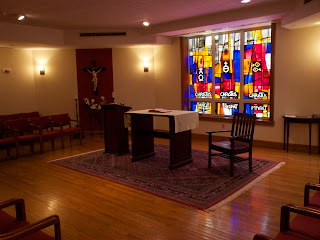 My first foray onto campus was before the blizzard on the only sunny day before  week of unrelenting clouds. 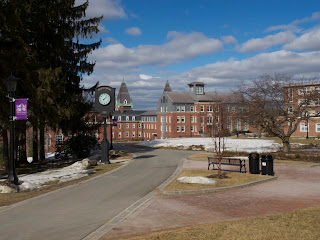 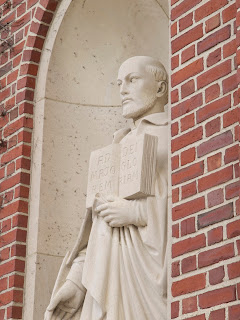 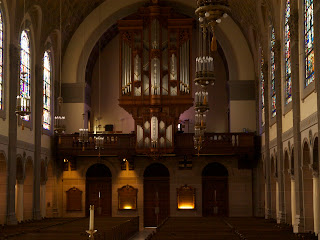 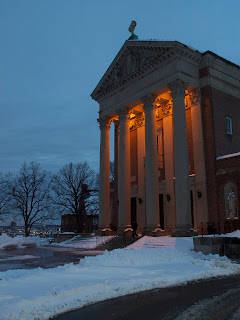 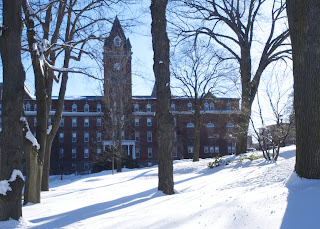