Feast of the Visitation of the Blessed Virgin Mary

The Visitation of Mary to Elizabeth is a moment that makes the entire gospel more human, the kind of moment that could have occurred in any of our lives.  Reading between the lines fleshes out the story.

Upon learning that she was to be the Mother of Jesus, Mary hurried to visit her relative Elizabeth. Elizabeth, the mother of John the Baptist, the herald who preceded Jesus, was in her sixth month of pregnancy. Kinship was understood differently in the Ancient Near East than it is in 21st century U.S. Thus, though referred to as cousins in some translations and kinswomen in others, we will never know the degree of relatedness between Mary and Elizabeth.  In the end, how they are related is irrelevant to the narrative.

The journey from Nazareth to Hebron where Elizabeth is thought to have lived was not easy. While the distance was about eighty miles as the crow flies, it was closer to one-hundred miles when following the established roads.  To get an idea of that distance, walk out of the driveway here at St. Patrick, make a right and stroll until you get to Hartford, CT.

Someone traveling on foot could cover about twenty miles a day.  Thus, Mary's journey to visit Elizabeth took between five and seven days. As it is certain that she traveled with a group rather than alone the trek probably took closer to seven days than five, or perhaps more. The dangers of being on the road  were as much a risk then as they are today.

So, there they were, a young girl and an older woman together for three months.  What did they talk about?  Did Mary stay until John's birth as pious legend holds or did she leave beforehand?  What did Mary think about on her return trip to Nazareth, a trip made while three months pregnant?

Mary's prayer, the Magnificat, is recited every evening at the close of vespers.  Over the centuries it has been set to music by many composers, with good reason.

"My soul proclaims the greatness of the Lord,
my spirit rejoices in God my savior."

There are certain lilies that can never be gilded.  Mary's Magnificatis one of them.  The prayer speaks of quiet contemplation and profound understanding of God's will. It is meant for the solitude of our souls and the silence of our hearts.  It does not require academic debate, acrimonious argument about whether it was adapted from Hannah's prayer, or a gender-neutral all-male-pronouns-removed feminist translation.  The Magnificatrequires nothing but daily repetition and frequent meditation.

Reread the Magnificat  later today.  Then spend some time sitting with these two women.  Listen to their conversation.  Pay attention to their silences.  Watch them go about their tasks.  Ask questions.  Offer to do the dishes.

One of the challenges of the Church's liturgical calendar is that Easter and all of the related feasts are based on a lunar calendar (Easter is the first Sunday after the first full moon following the equinox) while the major feasts are fixed on the solar calendar. I will only point out that Christmas is always on 25 December with tongue firmly planted in cheek. Thus, this year the Feast of the Visitation of the Blessed Virgin Mary, which is always on 31 May, follows the Ascension (which is celebrated on Thursday in the Archdiocese of Boston, forty days after the Resurrection), by one day.
It is a particularly favorite feast as I hope the homily makes clear.

A statue of the BVM at the monastery in VT.  It is quite small.  It is surrounded by wildflowers. 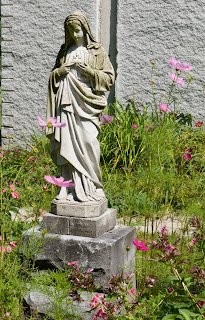 Wildflowers on the bank of the reservoir in VT. 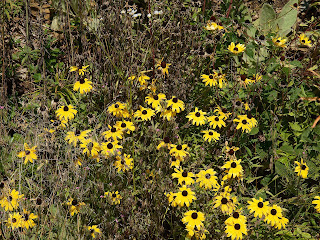 No idea what kind of flower it is.  I call it purple. 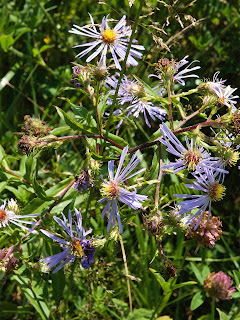 Homily for the 5th Sunday of Easter

The reading from Acts sounds as if Paul and Barnabas could have benefited from GPS or MapQuest. They covered a lot of ground.  At times Acts has the sense of a travelogue meant to describe the difficult work involved in spreading the message of Jesus crucified and risen from the dead.  These readings represent the beginning of the Church's missionary life.

Much was happening as the community of believers began to cohere.   Acts gives us the history.  Had this past Tuesday not been the Feast of St. Matthias with specifically prescribed readings, we would have heard the verse from Acts “and it was in Antioch that the disciples were first called Christians.”

As Paul, Barnabas, and the others spread out the Church was gaining an identity and the believers gained a name. That name, Christian, would serve to give a concise description of the followers of Christ, a name that would accrue more and more associations—positive and negative—over the ensuing millennia. These associations to the word Christian emerged, and continue to emerge, from observations of how Christians conducted, and conduct, themselves in the public arena.

This phenomenon of actions defining the name was well illustrated in a fine book by Rodney Stark titled, The Rise of Christianity: A Sociologist Reconsiders History,in which he studied the period roughly covered by Acts and extending into the first two or three centuries. (I read this about twenty years ago, it is a truly impressive book).  It is important to note for use in contemporary arguments that as per Stark, even in the earliest decades of the Church, the proscription against abortion, against adult men taking child brides, and the killing of the elderly, was absolute. The same, except for child brides, is found in the original Hippocratic oath written some 450 or so years before Christ was born.

The first reading from Acts gives us history.  It is anchored in a specific time and location.  By contrast, the reading from Revelation indicates a point well-beyond the horizon and well-beyond history.  It tells us of what is to come.  The images are strange, but they are the only kind of images that can describe, or at least hint at,  that which we cannot know in this life.

The reading does not tell us the how or the when.  But it assures us that we will be transformed in that instant upon death when we pass from life into eternal life.  We can take comfort knowing “there shall be no more death or mourning, wailing or pain for the old order has passed away.”  What greater consolation is there than to know that  pain, suffering, and sorrow will end.

The Gospel brings us back to something I said earlier, something that Stark demonstrated in detail. Our identity as Christians, our identity as Catholics, is anchored in Jesus’ command at the end of the Gospel. “I give you a new commandment: love one another.  As I have loved you, so you also should love one another.”   That identity should be apparent if we follow Jesus’ command.  That is sometimes the problem.  It is difficult to live the command.  It is much easier to brag about it or proclaim it in song, even if the song is awful.

Back in the seventies, a time during which some hideous hymns and songs were foisted upon the Church that inspired some of the greatest classical music ever written, one of the most annoying and wrongheaded songs--one cannot call them hymns--featured a thumping marching chorus and the stunningly narcissistic and self-aggrandizing lyric: “They will know we are Christians by our love, by our love. They will knoow woooo we are Christians by our love.” Sung too vigorously that last know-wooo sometimes sounds like the communal passing of a kidney stone.
Musical value:  none.
Narcissism index:  too high to calculate.

Perhaps if the verse were, they SHOULD know we are Christians IF they see our love, the lyric would be less grating, the sentiment less condescending, and more descriptive of a goal which we should share.  (Nothing will ever help the tune.)

There is, after all, nothing wrong with the conditional sense.  Rather than assuming that we manifest our love so perfectly that others will immediately see us as different, it is more realistic—and more humbling—to admit that we have to work at it.  The mere proclamation of ourselves Christians doesn’t mean that the love part derives automatically.

The psalm assures us:
“The Lord is gracious and merciful,
slow to anger and of great kindness.
The Lord is good to all
and compassionate toward all his works.”

Spring may have arrived.  Not entirely certain but it seems that the temps are up, the sun is out, and life is good.  BC graduates Monday.  Then things get quiet.

I frequently go to Glastonbury Abbey in Hingham, MA, about one hours south of here on what is called The South Shore, to meet with one of the monks.  The BC conference center at Cohasset is about six minutes away.  Generally combine two trips into one.  Of course I periodically take the camera.

The cross of one of the outdoor stations of the cross at the Abbey.  Bell tower in background.  I've not had a chance to explore the grounds but may try to do so one of these days. 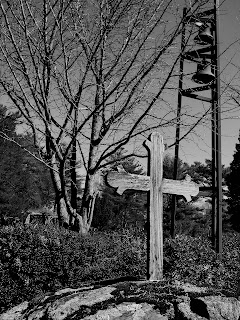 The Abbey just completed major construction and addition.  The monks only just moved into their new quarters. 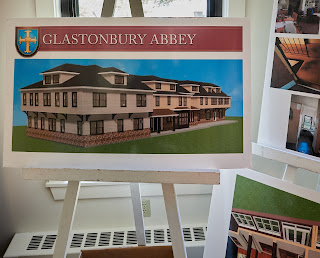 The Abbey Church.  I stayed for Mass this particular day.  That is something I am rarely able to do.  The sun was streaming through the window in the front making for some difficult photography.  Computer processing helped. 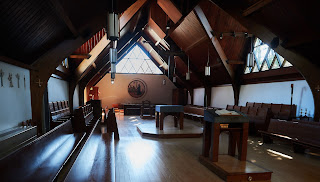 The icon of Our Lady of Glastonbury.  Had to shoot at this angle because of the reflection from the sun hitting it. 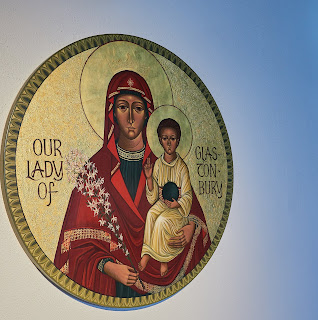 The gift shop sells Trappist Preserves (they are, after all, also Benedictine in heritage).  The pepper versions are fantastic.  I like spicy food and the monks at Spencer are not afraid of spice in their jellies.  They also do a red pepper one.  Great on the morning peanut butter and toast. 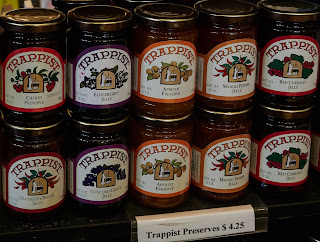 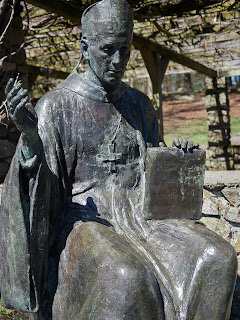 Close-up of the book. 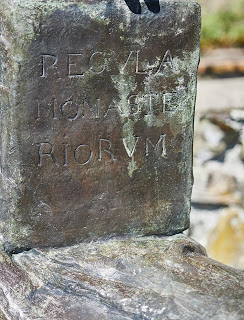 The view from the second floor of Cohasset overlooking the harbor.  The gray building in the distance are part of the John Quincy Adams estate. 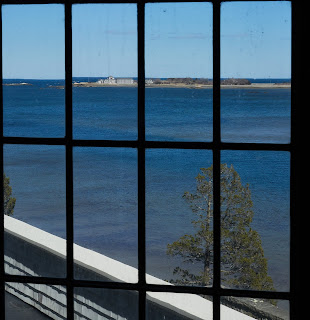 The harbor.  The Cohasset Yacht Club is further to the right. 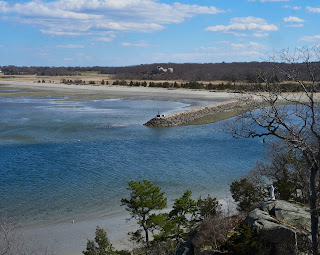 The Immaculate Conception overlooking the harbor. 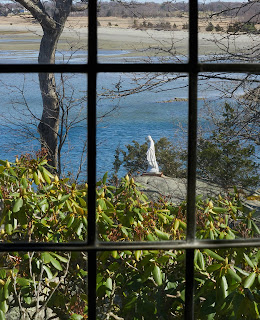 Love this kind of black and white photo.  A short essay in one photo. 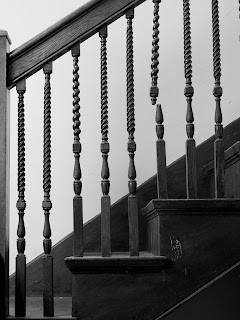 The crucifix in the house chapel at Cohasset. 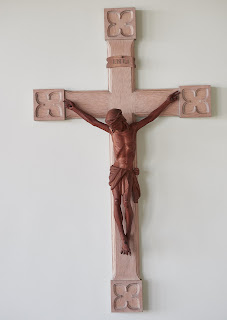