Solemnity of the Blessed Virgin Mary, Mother of God

1 January 2017
Today, January 1 in Anno Domini 2017, we rejoice in a three-part celebration: Today is The Solemnity of Mary, Mother of God.  We celebrate the Giving of the Name of Jesus.  And it is the 50th Annual World Day for Peace.

Each of these commemorations demands attention in prayer and contemplation as the new year begins. The Solemnity of Mary, Mother of God is an ancient celebration with roots that stretch back centuries.  It commemorates the part Mary played in the great mystery of salvation.  We recall her fiat, "may it be done unto me according to your word."  That simple phrase repaired the tear in the fabric of the universe caused by Eve's disobedience.  Eve, the mother of many, brought the first murderer into the world.  Mary, the Mother of us all, brought the Prince of Peace into the world.  On Thursday we heard Luke's telling of Jesus' presentation in the Temple.   Simeon prophesied to Mary,  "Behold, this child is destined for the fall and rise of many in Israel, and to be a sign that will be contradicted . . . and thy own soul a sword will pierce. . . "  What did the young mother think as she heard those words?

Today we renew our adoration of the newborn Prince of Peace.  We share in the shepherds' joy and awe.  We recall the Angel's command two weeks ago in Matthew's Gospel:  “Joseph, son of David, do not be afraid to take Mary your wife into your home. . . She will bear a son and you are to name him Jesus . . ."

Today is a major feast for Jesuits, men of the Society of Jesus, on two counts.  We celebrate Mary, the Mother of God, whom we revere as Mother of the  Society.  And we celebrate the giving of the name of Jesus, the name that Ignatius chose for The Society.

January 1, 2017 is also the 50th annual World Day for Peace, an observance instituted by Paul VI in 1967.  During the prayers of the faithful we will pray for our deeply troubled and troubling world.  A world that is overburdened by conflict.  A world of violence.  We yearn for peace.  We pray for peace.  We do not see it on the horizon no matter how hard we squint.

Peace is not simply the absence of war. Peace is not merely the cessation of armed hostilities.  It includes those of course, but peace is more complex than those simple definitions.  It is unlikely that armed hostility will ever cease.  It is unlikely that war will ever vanish from earth.  Efforts to establish lasting world peace, be they efforts made by governments or the humble efforts of individuals, will never prevent hostility, violence, anger, or threat.  Human violence took root when Cain murdered his brother.  That root is very deep and pervasive.

We are confronted with a paradox.  We seek peace, we pray for peace, yet we know it is unlikely in our lifetimes.  Thus, we are called to seek peace in the Eucharist.  The peace that is possible even in the midst of chaos and conflict.  The peace that comes with Body and Blood of Christ even on the battlefield.  We pray for peace at every Mass just before we receive Christ's Body and Blood.  Sometimes the peace we seek, the urgency with which we pray for it, cannot be adequately described in words alone because vocabulary is limited and limiting.

Joseph Haydn, a deeply religious man, composed The Mass in Time of War.  The text is the usual Latin text for the Mass.  The music reaches an emotional apex in the "Dona nobis pacem"  the final words of the Agnus Dei, that implore "grant us peace."  The tension in the music lifts. Suddenly, it sounds as if the choir of angels has taken possession of the singers. Trumpet fanfares and timpani almost overwhelm. The soprano voices soar into the skies as this final prayer before communion comes to an end.   In the music and words we hear a hint of the peace we desire, the peace for which we pray.

Went for a very long walk on Christmas Day.  Fairly warm and quite foggy until late in the evening.  Good thing for the walk.  We ate very well.  Usually the community meal is at 1:00 PM.  On Christmas it was at 6:30 PM.  Pix below.

Was walking down the hill from the Castle when I took this.  Was somewhat higher than the dome of the Cathedral of St. Nicholas. 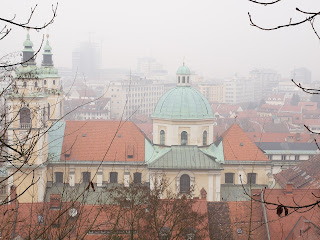 The Castle was shrouded in fog most of the day. 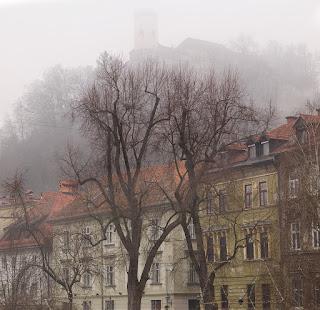 A tour boat heading toward the Franciscan Church 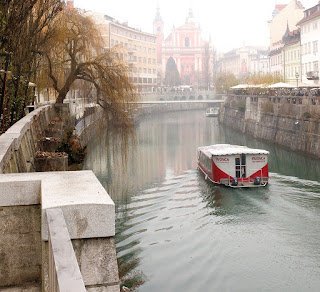 Leftovers at the Christmas Market. 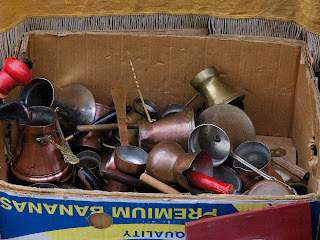 Christmas ornaments at the Christmas Market. 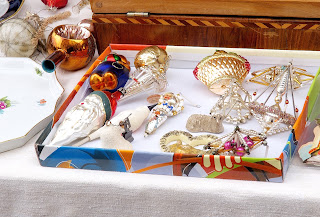 Fr. Mio asked if I was going to visit the straw creche.  As I had no idea it existed I asked what he meant.  I am grateful that he asked.  These figures are a bit larger than life-sized.  They are spread out in three distinct displays that would cover about half of a small city block.  Impressive workmanship. 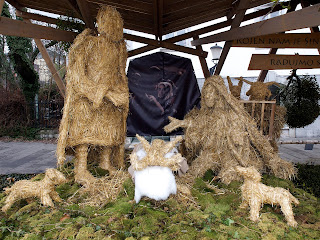 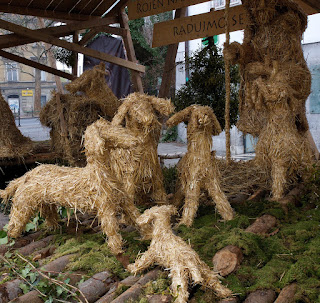 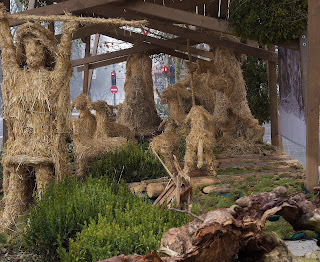 Peter and his dad.  His dad came down from Valenje with much of the food, the two of them cooked it, and we ate.  A lot.  I hadn't eaten all day and had walked several miles including the trip up to the Castle via a different and much steeper route.  No guilt dinner. 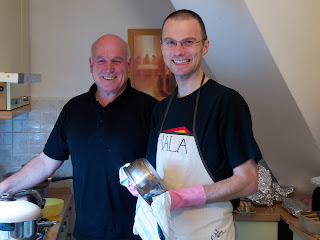 This is what a superior SHOULD be doing for his men on Christmas Day.  Cooking.  I did the dishes afterwards while the men talked and then broke into singing.  The men here sing beautifully, generally in spontaneous multi-part harmony. 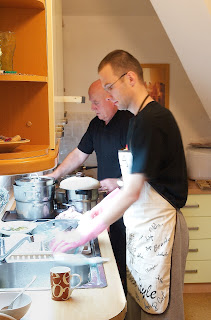 The ham, klobasa, smoked and fresh, came from a pig slaughtered the day we were up in Valenje for a funeral.  The klobasa closest to the camera is made with kasha.  And pork cutlets.  I have many photos of the pig butchering but will probably not post them as they are kind of gory.  The food was beyond amazing.  the leftovers the next morning were a great treat.  Yes, I had a cold klobasa sandwich with a few heaping spoons of 'hren' (horseradish) for breakfast. 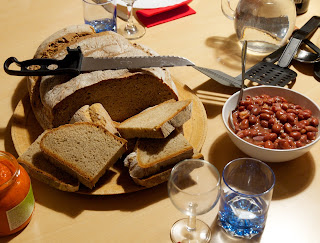 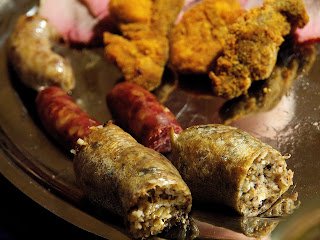 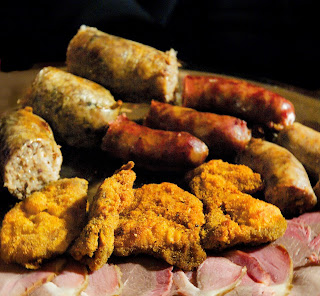 In his reflection on the Great Feast of the Nativity of Our Lord,  Saint Pope Leo the Great wrote,  ". . .  today our Savior is born; let us rejoice.  Sadness should have no place on the birthday of life.  The fear of death has been swallowed up; life brings us joy with the promise of eternal happiness . .  Our Lord, victor over sin and death . . . came to free us. . . . "

The Gospel just proclaimed is familiar.  One need only hear the first few words to settle into warm Christmas feelings.  Sometimes that comfort factor, the sloppy sentimentality that mars the observance of Christmas, hides the reality that Jesus’ birth was not easy.  Mary and Joseph struggled just as we struggle.  They were not immune to the same fears and anxieties that attack us on a regular basis.  Because of Mary's fiat and Joseph's silent obedience, we celebrate that Jesus, fully Divine and fully human, truly God and truly man, was born in a stable in Bethlehem and placed in the manger.

Forget the images on Christmas cards in which everything is clean and neat.  Ignore the paintings where Mary’s elaborate silk robes are beautifully draped.  And of course block the halos and the chubby angels completely out of your mind.  Jesus’ birth was a slice of life, a part of real life, just as we live it.  His birth involved:  Pain.  Blood.  Cold.  And the odor of animals.  His life affected all lives ever since. His life affects our lives.  Here.  In Ljubljana.  In sv. Jožefa.  In these last days of the year A. D. 2016

After four weeks of prophecies about Jesus today’s readings burst into song.   Several verses from the first reading were set to music by Handel in his glorious masterpiece, Messiah.  They include: "The people that walked in darkness have seen a great light",  "For unto us a child is born."  The responsorial exploded with joy: "Tell his glory among the nations; Among all peoples, his wondrous deeds.  Today is born our Savior, Christ the Lord."  Today we celebrate what the second reading proclaims:  that Jesus Christ gave himself for us to deliver us from all lawlessness; to cleanse for himself a people as his own.

Christmas is not an end in itself.  Jesus’ birth is meaningless without His preaching, healing, and passion.  Without His death, resurrection and ascension to the Father, there would be no celebration today.  Jesus’ life on this earth began in Bethlehem. It ended on Calvary in Jerusalem.  The life that began lying in the wood of a manger ended hanging on the wood of the cross.  Today we celebrate the entire arc of what theologians refer to as "The Christ Event."

For now the purple vestments of Advent have been replaced by the white that marks the Christmas Season.  On March first, however, the joy of the Christmas season will give way to the penitence of Lent. Today we sing Silent Night, Joy to the World, and other carols that attempt to capture the joy and mystery of Jesus' birth.  But there is something we must always remember.

Some of the greatest theological statements in history have been written not by academic theologians but by men and women who didn’t just talk the talk in their ivory towers.  They walked the walk. They did the heavy lifting.   One of them was the late Dag Hammarskjöld, third Secretary General of the U.N. Hammarskjöld was a deeply religious man.  He captured the history of our salvation in a haiku  . . .  just twelve words, a total of only seventeen syllables:

On Christmas Eve, Good Friday
Was foretold them
In a trumpet fanfare
The Gloria in Excelsis Deo we sing today will lead to the Alleluia, He is Risen at Easter.  We move from Gloria to Alleluia by way of the cross.  And only because of that cross can we sing today

Come let us adore him,  Christ the Lord. 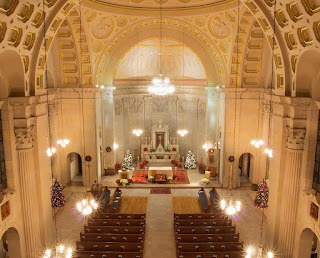 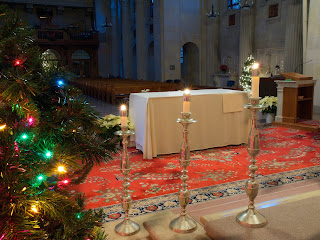 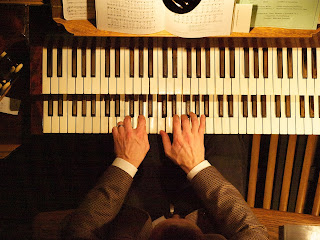 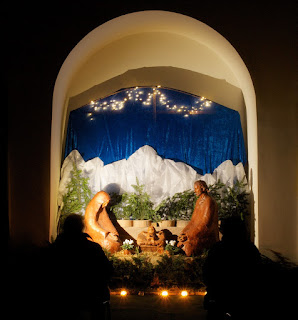 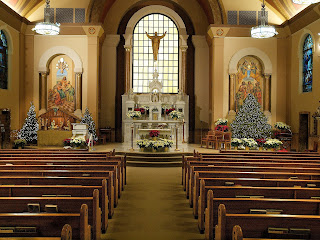 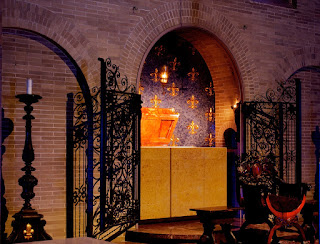 Let us all rejoice in the Lord,
for our Savior has been born in the world.
Today peace has come down to us from heaven. 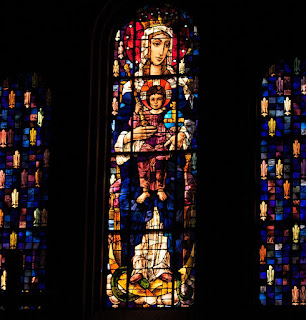 Photo: The "Salve" window at St. Joseph Abbey (Trappist) in Spencer, MA.  Every night at the end of compline the monks turn toward this backlit window in a darkened church.  They chant the Salve Regina, the final prayer of the Church's day.

Meditation:  Dag Hammarskjöld described this night in a haiku. Using only seventeen syllables Hammarskjöld summarized the complete arc of our salvation.

On Christmas Eve, Good Friday
Was foretold them
In a trumpet fanfare.

Without Good Friday we would not celebrate on this night. Sometimes the gooey sentimentality attached to Christmas buries its meaning under waves of treacle.  What began in the wood of the manger in Bethlehem ended on the wood of the Cross on Calvary.  It could not have been otherwise.  Christmas cannot be understood in any other way.

O God, who have made this most sacred night
radiant with the splendor of the true light,
grant, we pray, that we, who have known the mysteries
of his light on earth,
may also delight in his gladness in heaven,
who lives and reigns with you in the unity of the Holy Spirit,
one God, for ever and ever.
Collect for Midnight Mass

Lagniappe:
O Holy Night sung by Leontyne Price.  This is the definitive version in English.  It will never be equaled.

The Polish equivalent, Wśród Nocnej Ciszy by Mazowsze.  I think this was the last kolęda sung before Mass, possibly in the dark though at this point memory is a little shaky.

https://www.youtube.com/watch?v=wDcHZ9i8KSk
Posted by Fr Jack SJ MD at 2:18 AM No comments: