Four days at the monastery

No homily today.  Just photos.  Was up in Vermont from Wednesday to Sunday.  Fortunately I left Boston on Wednesday rather than the planned Thursday.  Great three and one-half hour drive up.  A few sprinkles began upon arrival.  The skies went berserk by the time vespers ended.  Thursday was marked by very heavy rain, thick fog, and ice in parts of VT though not the mountain.  Not certain I would have made it.  If I did I would not have enjoyed the trip.   Friday was ugly.  By Saturday the temp had dropped 30 plus degrees to 9.  Road dried out from heavy wind and got solid.   All shots taken inside.

This outside garth was taken through an open window in one of the halls. 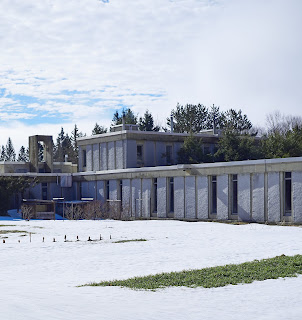 The choir stalls are very deep, rather like a phone booth (remember those?).  The wood is bird's eye maple.  Beautiful wood that photographs well.  Too often I've encountered cheap wood that has been varnished. It  photographs very oddly. 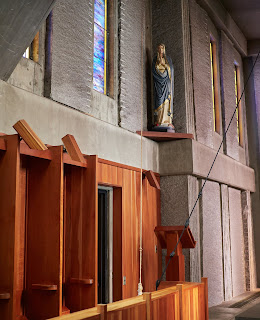 The sanctuary lamp.  A real candle not an electric one. 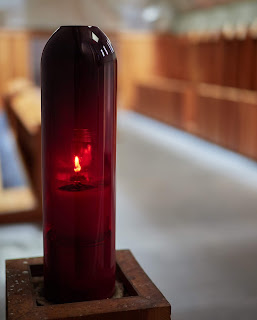 As wide-angle as I can take with my equipment from the back of the monastic church.  The light along the sides and above the altar is skylight.  The only overhead lighting in the church comes from the rectangular boxes over the stalls.  The light is controlled with a switch under the arm of the stall.  It is turned on only when absolutely necessary. 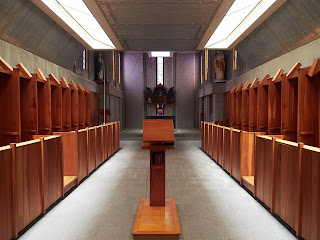 The choir from a different angle. 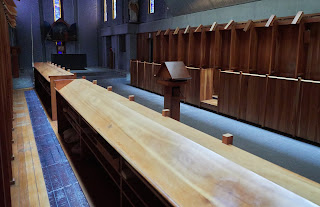 Overlooking the cemetery.  Focused on the condensation on the window and the sun-catcher rather than the crosses over the graves. 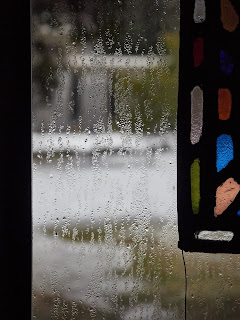 Books ready for the next office. 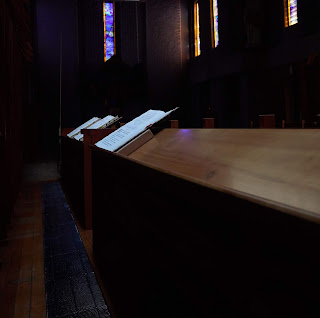 Sacred vessels at the ready for Mass. Father preparing for the consecration. 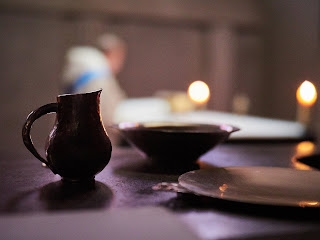 Elevation of the Precious Body of Our Lord. 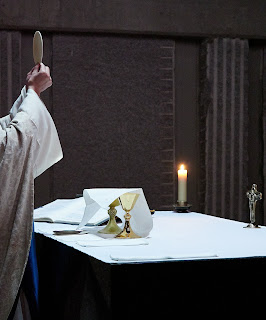 The monks in their stalls.  There are sixteen men there are the moment.  Their habit is white with a very deep hood.  The bands connecting the scapular are a hallmark. 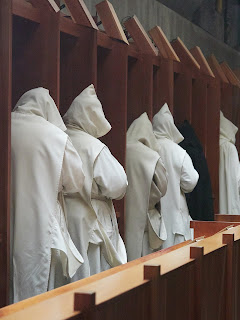 The lectionary containing the readings for Mass. 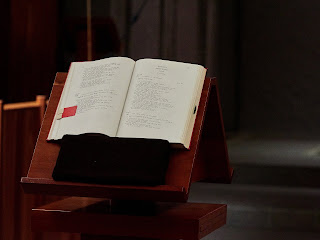 The bell ropes.  The lighter colored one is for the bell that signals the Angelus and is rung during the consecration.  The darker pull, is for the large bell that is rung before the liturgical hours and Mass. 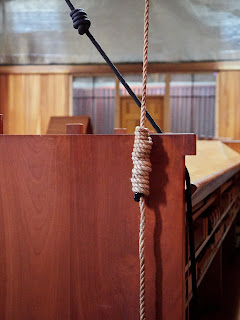 The cemetery.  Once again taken from one of the cloister walks after opening the window for as short a time as possible.  By the time I took this the temps were in the single digits. 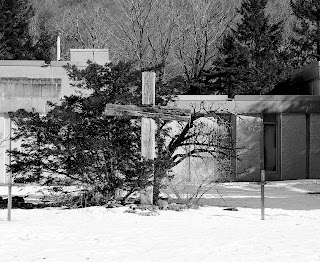 The cemetery from the other end of the walk.  Once again through a long slit window that was open long enough to permit the shot. 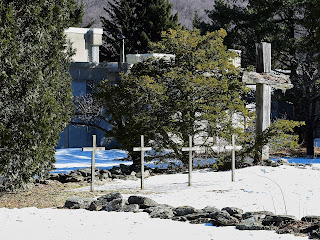 The monastery is constructed of unfinished concrete and granite blocks with the milling marks in place.  This is one of them.  The textures are fascinating. 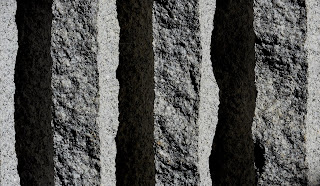 "I have been crucified with Christ; it is no longer I who live, but Christ who lives in me. . . ."
"Do not fear those who kill the body, and after that have no more that they can do."
These verses from the first reading and gospel are particularly resonant today when we honor the memory of three Jesuits and their companions who were martyred in Japan in 1597.
St. Paul Miki was killed at 33 years of age, just a few months short of his ordination to priesthood. His two companions were St. John Soan de Goto, a 19 year-old scholastic novice and St James Kisai, a 64 year-old brother novice. Twenty-three other Japanese Catholics, both lay men and women as well as members of religious orders, were crucified with them.
Miki was from a well-to-do Japanese family. He was baptized a Catholic at four or five years of age when his family converted. Goto was born to Catholic parents who had to immigrate to Nagasaki to escape persecution. Kisai converted some time in his youth. He later married a Christian woman. When his wife returned to Buddhist beliefs the couple separated. He entered the Society many years later. The novices Goto and Kisai secretly pronounced their perpetual vows two days before they received the crown of martyrdom.
Catholicism spread rapidly in Japan in the 41 years after Jesuit missionary St. Francis Xavier arrived in 1549. Scattered persecutions began around 1590. Things got ugly by 1596. Shusaku Endo's horrifying novel Silence, (also made into a movie) set during the persecutions, details how ugly.
After enduring a month-long 600 mile journey while bound in an open horse cart the condemned arrived at the hill of crucifixion in Nagasaki. There they sang the 'Te Deum' and embraced the crosses on which they were to die. As they awaited death the group chanted the Canticle of Zechariah from Luke's gospel, a canticle that is said or chanted every morning.
"Blessed be the Lord,
the God of Israel,
He has come to His people
and set them free. . . . "
While hanging on the cross Goto greeted his father who was in the crowd with the words, "Father, remember the soul's salvation is to be preferred to everything else." Miki's last words, before two lances were thrust into his chest were, "Into your hands, O Lord, I commend my spirit." These three martyrs along with the others who died with them remain relevant today, in particular for their adherence to their faith despite extreme torture.
Crucifixion is more or less out of fashion in the U.S as a penalty for not hewing to the party line. But, just as Paul's words were metaphorical, crucifixion of believers today is a metaphorical one, a crucifixion of words, exclusion, and threat rather being nailed to a few pieces of wood.
"You're a what?"
"You're kidding!"
"You don't support abortion of full-term infants, what are you anti-feminist?"
The late Carl Sagan reportedly had the following exchange with a woman friend who was a Methodist minister:
Sagan: "You're so smart, how can you believe that nonsense?"
Minister: "You're so smart how can you not believe?"
The rejection, hostility, or horror of others toward those who profess and live their faith is frightening. There are some who would like to exile any one who takes a stand against abortion, rejects killing the sick elderly as an option, and believes that natural law trumps political correctness. Consider the recent remark made to conservative republicans by Mario Cuomo, governor of New York that 'anyone who is pro-traditional marriage, pro-life, or pro-guns has no place in the state of New York.'  His daddy wasted one ton of money sending him to private Catholic schools.
This kind of hostility and threat replaces the physical crosses of Miki, Goto, Kisai, and companions. They could have recanted. They didn't. We can modify our beliefs or life-styles to conform to the hip, the edgy, the politically correct party line, or the murderous when it seems expedient.
We must not.
St. Paul Miki ora te pro nobis.
___________________________________
Am posting a bit early. The memorial is not until tomorrow. I head to Vermont tomorrow after the 11 AM Mass. Won't return until Sunday. Computer and phone access are minimal to non-existent. Nice break.
I did not see the movie Silence. I'd read the book three times by the time the film was released. Sometimes I avoid seeing the movie of a book that had a profound impact on me. Many years ago I realized that I would never see the movie of The Name of the Rose if one were made. The movie was made. The idea of seeing Sean Connery, fine actor, as a Franciscan priest did not work.

The first two photos are of the same cross on the grounds of the retreat house in Guronys, Lithuania.  I gave two weekend retreats to physicians and others there while spending the weekdays in Vilnius.  I did not do much outdoor photography, none in Vilnius, because the weather was finger freezing and camera killing.  My body no longer does well in cold weather.  There is only one option: stay indoors.

The cross if at least 15 tall perhaps more. 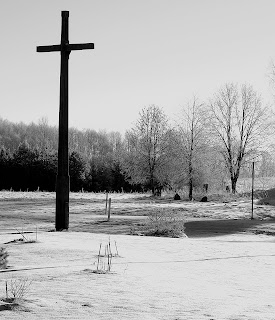 The little "roof" over the corpus is typical of Lithuanian crucifixes though I've seen it in Slovenia as well.  I was standing directly below and shooting up. 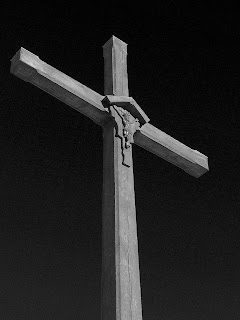 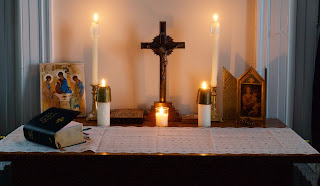