The first stanza of one of the English speaking world’s greatest, most well-known, and oft-sung hymns says it all.

The words were written in 1772 by John Newton who had the same epiphany while aboard a ship that Paul describes in the letter to Timothy.  Both men realized their blindness and fundamental unworthiness.

Weirdly enough, there are other versions of the hymn that replace the word wretch with the non-judgmental and vaguely self-affirming term soul, or the thoroughly pallid and limp-wristed “that saved and set me free.”  It appears that the revisionist lyricists are trying to deny the reality that we are sinners in need of forgiveness and redemption.  They apparently understand the human condition in the same way that Garrison Keilor describes Lake Woebegone,   “. . .where all the men are strong, the women good-looking, and the children above average.”  That we are wretches in need of saving is beyond debate.  But we are wretches who are loved and passionately pursued by God, who loved us first, and continues to love us.

“I bless the Lord who counsels me;
even in the night of my heart
exhorts me.

You will show me the path to life,
fullness of joys in your presence
the delights at your right hand forever. “
______________________________________________________________________
Autumn.  It is coming.  Despite two days of very hot weather, fall is coming to New England.  There are a few isolated areas of brilliantly colored leaves along my usual travel paths to BC or Newton-Wellesley Hospital (a place I've been visiting way too often of late).  Last night's deluge dropped the temp about twenty degrees.  Weather is going to be splendid for the wedding tomorrow.  Eight days to go until I go on my vow retreat.  Listen carefully at noon on Saturday 21 September.  The sigh will be heard throughout the east coast as I pull out to drive west for a few hours.  I'd hoped to go to St. Vincent Archabbey in Latrobe, PA for the retreat.  I've been there twice before.  The community is very welcoming, the setting is rural western PA and I always pass through State College on the way back.  However, whereas it was just over 4 1/2 hours from D.C., it is a very long drive from Boston.  More than I can manage at this point.  Below are some photos from the archabbey (St. Vincent was the first Benedictine Monastery in North America).

The Grist Mill is across the road from the main abbey grounds.  Until recently there was a coffee shop in the back.  Alas, I've heard it has closed.  Pity.  The coffee at meals in the abbey is not all that good.  One of the treats I gave myself during retreat was to go down there every afternoon for a gigantic strong coffee drunk either inside or on the patio.  I was generally the only customer there.  That explains a lot about why the place is closed. 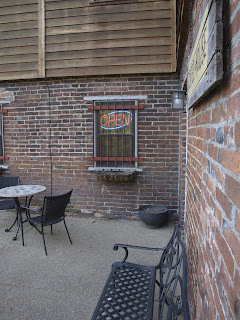 This wheelbarrow was under the grist mill just to the left of the patio.  The sun was hitting just right on a late October afternoon. 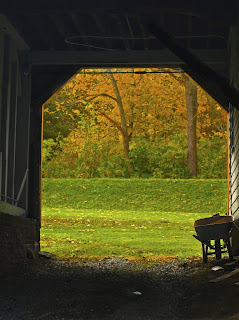 A very close-up of a red leaf. 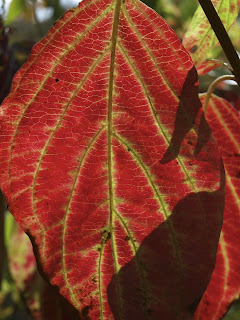 St. Vincent Seminary is on the grounds of the archabbey.  This is the view through the front door. 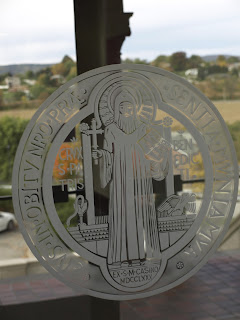 The Archabbey was established in 1846.  There are many rows of crosses in the monks cemetery. 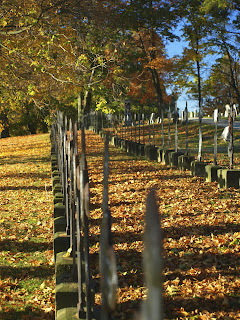 The vesting sacristy.  The monks wear cowls and stoles when concelebrating.  These are not easy to get into.  I had more than a little trouble with the hood when I made a retreat there after ordination to the priesthood.  I made a retreat there a few weeks before being ordained a deacon.  Got out of the car and saw a monk coming out of the enclosure.  As I had no idea what to do next I hailed him and introduced myself.  He noted they were expecting me and added that it was too bad my name was spelled with an A (Saberski) rather than an i.  I noted it was misspelled on the board and the spelling with an i was indeed correct.  He then asked if I new Dominic Siberski.  After getting my breath back I noted that yes I did and, in fact, he was my father.  It turns out that he was from the Georgetown section of Wilkes-Barre, went to school with one of my cousins and somehow knew dad.  As dad had been dead for over thirty years at that point it was something of a surprise. 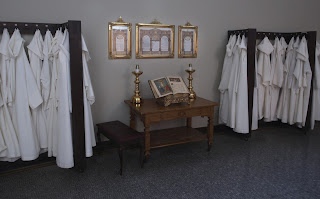 The holy oils.  The church is huge.  I hope to go back some time with a tripod for some real photographic fun. 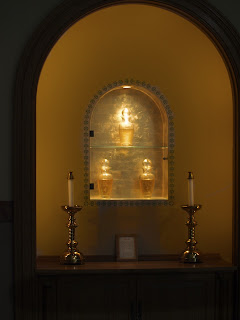 We are simple humans, fallible and unknowing creatures, who struggle to make sense out of the world. Our questions are basic.  Our answers are always tentative, subject to revision, and oftentimes flat-out wrong.  Freud comes to mind.

The question that began the first reading is the key to understanding the dilemma of being human. “Who can know God’s counsel or who can conceive what the Lord intends?”  That verse should be inscribed over the entrance to every theology school and seminary in the world, to say nothing of universities, high schools, and homes.  Perhaps it would temper some of the theological-scriptural-sociological-psychological arrogance of preachers, theologians, scientists and others.  It might tamp down the smug certainties of fundamentalists and liberals alike.  Who can know God’s counsel or what He intends?   Not us.  Alas, that doesn’t mean humans don’t pretend to know God’s counsel and what the Lord intends.  Much of what we say about God and His will, represents not God’s counsel but projections of our own fears and fantasies, desires and disappointments, wants and needs.  That is, they are concoctions of the human mind meant to soothe it.

“Scarce do we guess the things on earth, and what is within our grasp
we find with difficulty.”  In a word, we simply don’t get it.  Men on the moon . . . But we can’t ease the traffic on 128 and 93.  Heart transplants are routine . . . but the common cold remains a scourge.  Seedless watermelons (wasted research dollars as they lack flavor as well as seeds). . .  but hunger afflicts most of the world.  We really don't get it.  Our only choice is to accept our mortality, our fallibility, our fundamental status as flawed beings, who are loved by God, but whose intent we can never know.  Thus, we can only marvel at the insight of the psalmist, “For a thousand years in your sight are as yesterday, . . . or a watch in the night. . .”  We do not know God’s counsel.  We do not know what the Lord intends.  It can never be otherwise.

But Jesus is not simply addressing the need to plan ahead.  He is warning us of the cost of commitment, of the cost of going through with those plans.  What is the cost to someone who chooses to follow Jesus?  What is the cost to someone who chooses the radical yes of religious life and lives that yes with integrity?  The cost is high.  It is high in ways that are unique to each of us, in ways that reflect our individual life stories.  Jesus is telling us to calculate the cost.  He is also telling us that the cost of following Him is going to be high.  It may be higher than we expected.

Because we cannot know God’s counsel or what He intends, we can say yes based only on the faultiest of human calculations.  We can say yes only on the grounds of faith, a virtue defined in Hebrews as: “the realization of what is hoped for and evidence of things not seen.”  Thus we share the prayer of the psalmist as we continue blindly on our way:

The pace of life is picking up a little too quickly.  The next two weeks are going to be busy in the extreme but relief is in sight.   I have several trips taking men to physician offices scheduled.  The car has to go in for servicing.  I am moving into the recently vacated room next door.  The move is occurring for two reasons.  The new room has a glassed-in/screened-in porch.  It does not have the western exposure that turns my current room into a sauna when the sun is going down.  Except for the futon with frame and the chair I should be able to move most of the stuff myself.

Wedding rehearsal Friday in the North End and wedding on Saturday.  And then comes the countdown.  On Saturday 21 September I will leave here for an eight-day retreat in preparation for final vows.  Looking forward to the silence, seclusion, time for prayer and reflection and some opportunities to do some photography.  There are a number of things to get done prior to the retreat, a few things to do on the retreat and then it will be time.

The photos below cover an Eastern Rite celebration here at Campion, Campion itself and Taiwan.

Bob Taft, SJ was named an archimandrite in the Eastern Rite Church a number of years ago.  He is entitled to wear the mitre of that rite.  A few weeks ago he celebrated the 50th anniversary of his ordination with an Eastern Rite Thanksgiving Service here.  These are various photos of Bob vested.  This was my first attempt at "event photography."  I was the guy in clerics and stockinged feet prowling the chapel.  Got some very interesting photos from the choir loft.

These are two photos of a small temple in Changhwa, Taiwan (Ignatius' home area) and, in the first of the three, the entrance to an older house.   I yearn to go back there though I want to visit Hong Kong next time as well. 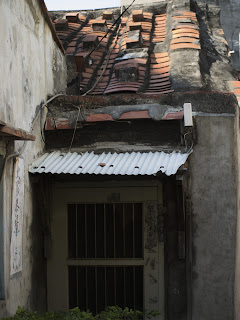 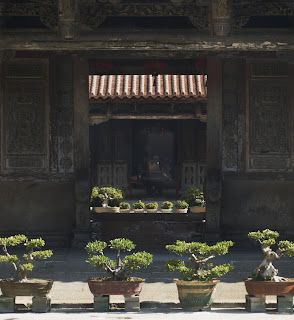 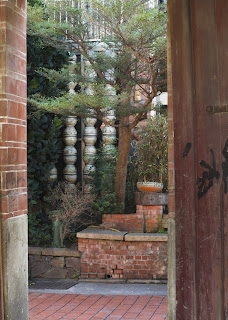 Here is Ignatius descending the steps at Campion.  I had taken him up on the roof shortly after he'd gone running. 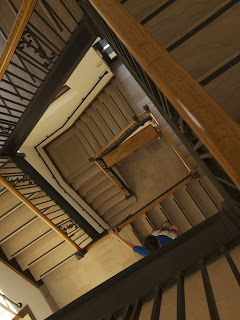 A detail of the carved stonework.  Not many craftsmen left who can do something like this. 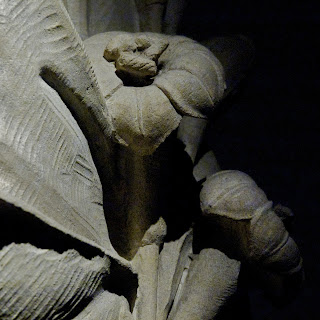 And a different type of dragonfly. 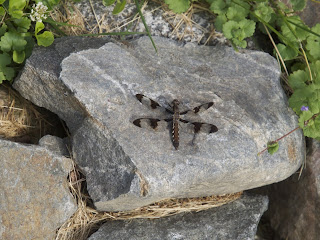