Jesuits frequently use AMDG at the end of a letter.  My vow ring is engraved with it.  It is the Jesuit motto.

Ignatius of Loyola was a complex man.  He was born in 1491.  Most of his youth was spent learning to be a soldier and a member of the royal court.  Though poorly educated, he could read and had very fine penmanship.  At twenty-two years of age the hot-headed Basque soldier was injured while leading his overmatched men in the Battle of Pamplona.  It was one of the most blessed injuries in the history of war.  While convalescing in the castle of Loyola he was gradually drawn to the desire to follow in the footsteps of Christ, to do great things for the Greater Glory of God.  It is a fascinating story.

Ignatius was charismatic.  A group of men gathered around him at university to do the Spiritual Exercises that he composed while in Manresa.  Some of those men, including Francis Xavier and Peter Faber, who were both canonized, were among the original nine companions when the Society of Jesus was established in 1540.

Two days ago we heard the well known Gospel narrative of Martha and Mary.  Mary at prayer as she sat at Jesus' feet and Martha grumbling and whining as she did the work of preparing the meal.  In St. Ignatius we see a combination of Mary's contemplation of Jesus' word  and Martha's busy-ness in response to demands of work without the complaining.

The totality of Ignatius’ presence to Jesus word was like Mary’s.  Like Martha he had many distractions. He wrote an enormous number of letters.  He was writing the Jesuit Constitutions, missioning men throughout the world, and answering hundreds of questions as the Society grew. At times he had to put his foot down.  All novices read his famous letter on obedience, a 4000 word missive that he wrote to young Jesuits in Portugal who were in a rebellious mood. But it was the fruit of his prayer that influenced and changed world history in ways that can never be overestimated.

Despite the enormous demands of the rapidly growing Society, establishing schools, dealing with hostility from other orders and the occasional pope, missioning men throughout the world, and writing the constitutions for the Society, he was disposed to hear and contemplate the word of God in the midst of, and despite, many distractions.  His health was not good. Yet, he continued to pray and work without grumbling, always to the Greater Glory of God.

Ignatius died in 1556, age 65.  He had been named the first general of the Society in 1541 and was still holding that office at the time of his death.

Jesuits pray a number of prayers written by Holy Father Ignatius. One of these is the prayer for Generosity.  It outlines how to live AMDG.

Ignatius Feast is always a fine celebration no matter where in the world it is celebrated.  I've done so in several countries.  We will celebrate later tonight at dinner with community vespers beforehand.

An interesting fact from Ignatius' autobiography is that after his conversion and well before the Society was founded he wondered about entering the Carthusians, an eremetic monastic order founded by St. Bruno in 1082.  Had he done so world history would have been different.  He would have disappeared anonymously into a hermitage somewhere in Europe.  Period.  Even today, if a Carthusian publishes anything he remains anonymous, publishing under the name, "A Carthusian."  The Exercises never would have happened however and nothing would have been published.

Last weekend I made my second visit to the Charterhouse of the Transfiguration in Arlington, VT, the only Carthusian Monastery in the U.S.  I'd been invited to give some talks on loss, grieving and mourning with a focus on religious life.

The Charterhouse sits on 7000 acres of land donated to them in the 1950's.  The monastery that is completely closed to visitors, retreatants, and tourists, sits about halfway up Mt. Equinox.  Mt. Equinox is accessible only via a toll road open from 9 to 5 daily.  Though not like driving up Mt. Washington in NH, be sure brakes are working well before heading up to the top, a drive that features some impressive hairpin turns.  Below the summit is the monastery outlook that affords one a view of the entire sprawling monastery way below.

I was staying on the mountain in a house built by the donors before they gave the land.  It is a classic 1950's house overlooking the valley.  Because I was already on the mountain I had the chance to go to the outlook and summit at times when the access road was closed to visitors.  It is a joy to be absolutely alone at the top of a mountain hearing only wind (there was lots of it and it was cold) and the sounds of birds.  No traffic noise reaches the summit or the monastery that sits in a mountainside valley.  Of  course there is next to no traffic in Arlington, VT to make sounds anyway.  The superior of the monastery pointed out that the charterhouse is the most geographically isolated of all houses of the order.

Below are some of the photos from multiple trips up the mountain.

Two views of the monastery from the outlook, one with a wide-angle lens and the other telephoto, the equivalent of 400 mm.  The wind was so fierce that I had to use a weighted tripod.  The entrance is to the right of the photo.  The monastery is entirely concrete and granite.  The poured concrete cross at the entrance is a bit larger than life size. 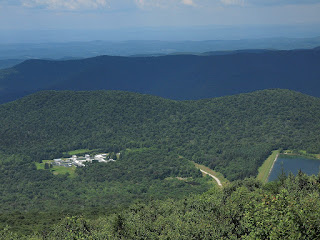 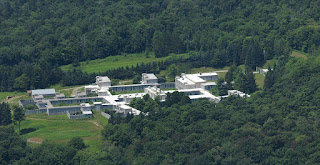 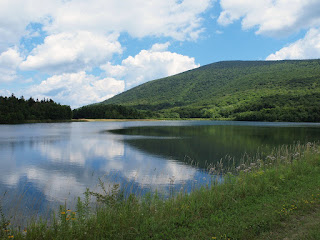 The monastery in the center of the photo at sunset. 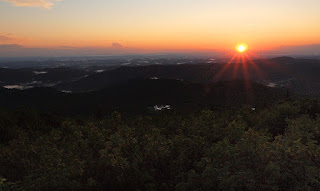 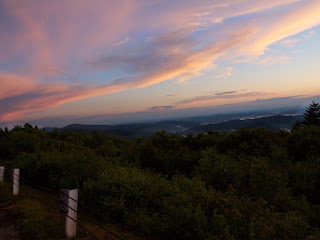 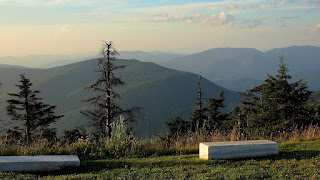 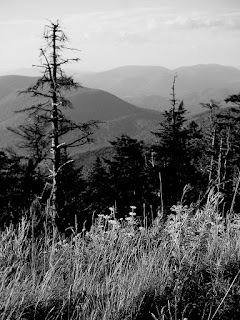 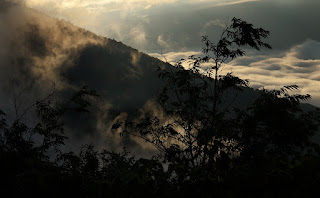 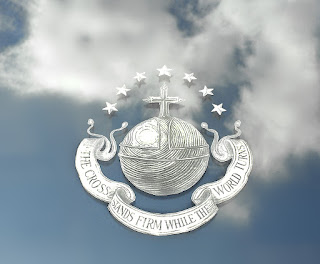 Memorial of Augustine Zhao-rong and Companions

Today is the memorial of St. Augustine Zhao-rong and one hundred nineteen companion martyrs of China who were slaughtered from 1648 to 1930. These first saints of China were beatified at various times over the years.  John Paul II canonized them as a group on 1 October 2000.  The canonization infuriated the government controlled Patriotic Association. Eighty-seven were native Chinese ranging in age from toddlers to the elderly.  The rest were foreign missionaries, both men and women, from several orders.  The missionaries included four Jesuits.

Augustine Zhao-rong was martyred in 1815.  He had been one of the soldiers
escorting Msgr. Dufresse of the MEP to Beijing to his own martyrdom.  Augustine was impressed with the monsignor's witness and asked to be received into the church.  He was sent to seminary and ordained prior to his own death.  Some of the martyrs were barely teenagers who held to their faith to the point of death despite the choice to apostasize.

We need to know their stories.  The numbers and time, one hundred twenty dying over three centuries, softens the impact.  Only the individual stories make the martyrs real.  That reality is painful.  The reality of martyrdom, the reality of death through the intention of another, is even more painful when we can identify with those who died.  Even those who were martyred in modern times.

I did my undergrad at Penn State from '68 to '71.  The 9/11 terrorists murdered ten of our alumni, men and women who walked the same routes I did, used the same library, and came to maturity in that special place. One was a stewardess for American Airlines.  One graduated two years before I matriculated.  Only when we hear the details does the pain hit. Only when we come to know the individuals behind the numbers do the tears flow as they did when I read the story of Michael Ferugio, class of '87.

He had befriended the maintenance and cleaning staff.  His address book found by his wife after his death had a phone number with the following notation: "Ludmilla, cleaning woman, 31st floor-WT2, son is at Penn State!!"

The abstract numbers mask the pain. They hide the human dimension.  The frequency of mass murders and deaths decreed by terrorists overwhelm our ability to appreciate or understand the human cost.  Each death ripples out, affecting many others.  We become inured. Yet the numbers of martyred Catholics continues to increase.  The number increases in the Middle East, in India, in China and elsewhere.  We pray for those whose faith was strong.  We pray that they will be examples for us.  The following describes the deaths of Jesuit Fathers Mangin and Denn in 1900.

The assailants broke through the doors to find the congregation at Mass. The two Jesuits were at the altar. The killers offered to spare those who would apostasized. A frightened few did. As guns were fired Jesuit Fr. Denn began the Confiteor and Jesuit Fr. Mangin gave absolution. The priests died first.  Some of the assailants began shooting while others slashed their victims with swords. The chapel roof was set on fire and smoked filled the building. A few worshippers escaped through the windows, uttering words of apostasy. The majority of the Catholics, however, died on the altar of holocaust.

I was in France two years ago.  It was a wonderful time.  I went berserk with the camera, particularly on Friday afternoons and weekends.

Garden scene in the garth at the Jesuit community in Lyon. 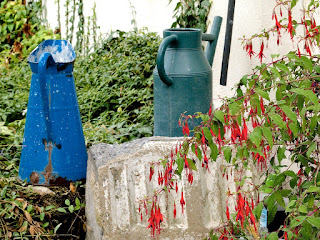 Gladiola in the garth. 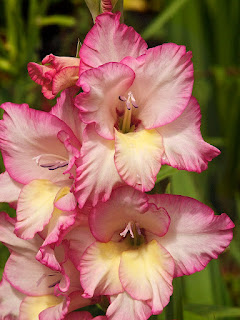 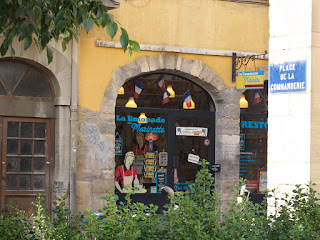 Light sculpture in the train station. 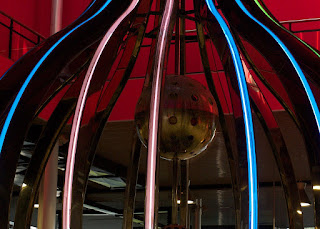 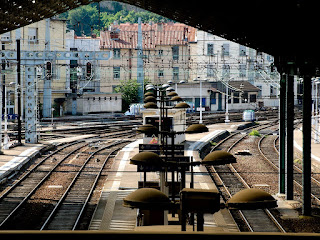 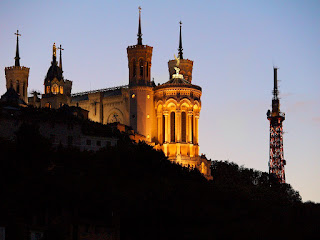 Fireworks at the Basilique on 14 July.   If you are in France DO NOT call it Bastille Day.  You will be severely corrected. 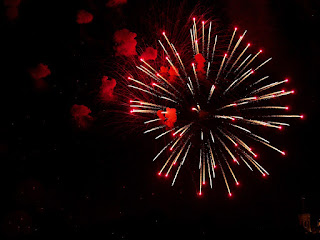