Sam Sara, of the Society of Jesus, of the Georgetown University Jesuit Community for over forty years, and for the past three years of the Campion Community, was a model Jesuit in a quiet unassuming way.

A native Iraqi who attended Baghdad College, he entered the Society at Shadowbrook in 1950 at age 20.   He was ordained in 1963.  Should you go to the hallway leading to the lounge you will see the photo of his ordination class.  It is the only one in color.  On the day of his ordination Sam looked the same as he did on the day of his death.  The same fringe of hair, the same intense gaze, and the same wiry frame. It is unlikely his weight ever varied by more than a pound or two.  I think he was able to wear the slacks he wore at ordination until he was about seventy. And he probably did.  More on matters sartorial later.

After the usual formation Sam received his PhD in linguistics from Georgetown.  I thought of reading off the list of things from the Georgetown website in which he was considered an expert.  However, I couldn't pronounce half of them, so we'll leave things at Arabic linguistics and phonology.  He taught at Georgetown his entire career.  He was a loved member of the Georgetown Jesuit Community.  One could say he was one of "the old guard."   He did his work, teaching, grading, and committees without whining or complaining.  It took a little while to get to know him when I first went to Georgetown. He never went to pre-prans, he ate dinner early, generally returned to his room for the news in Arabic, and then went back to his books and work.  An exemplary man for others he was quietly involved in other forms or service.

Sam celebrated Mass every Sunday for almost forty years at Epiphany Catholic Church down on Dumbarton St., less than a mile from the university.  It was an easy walk from campus.  He only stopped when it became too difficult to get there.  It pained him to give up this ministry.  During good weather one would see Sam crossing campus in wrinkled but immaculate tennis whites, a white bucket hat protecting his bare pate and a tennis racquet gripped in his hand. He was a fierce competitor.  He continued to play even after bypass surgery, until Parkinson's made it impossible for him to continue.

Sam's two major summer joys were:  tomatoes and figs. Every midweek during tomato growing season he traveled to the Georgetown villa house in Centreville, Maryland to tend his tomato plants.  When they were ripe he brought overflowing trays to the community dining room.  We all awaited that moment.  He grew the standard reds, of course, but also a number of heirloom varieties.  Sam's tomatoes, black bread, a bit of mayo and a lot of pepper was my lunch and supper when the harvest was flowing into the house.

Figs are delicate and not easy to grow.  When the community moved to the new house in 2003 Sam had the two fig trees from behind the old house transplanted to the front of the new one.  He picked the ripe figs with the touch of a neurosurgeon, gently placing them in a metal bowl that was nestled in ice.  He even tolerated a degree of fig-loss to the birds with reasonable, though not total, equanimity. The end of summer was approaching when Sam asked, "Have you ever had a fresh fig?" as he proffered some of his take.

Sam came to Campion Center in September 2013 when the combination of Parkinson's disease, the side effects of the medication necessary for treatment of the motor disorder, and the discontinuation of assisted-living at the Georgetown community made the move necessary.  But even before his move he was no stranger to Campion.  About twice a year he traveled here for a few days to visit the men who had been in Baghdad.  He maintained a tremendous affection for them and seemed a bit diminished each time one of them died.  One of his great personal losses was the death of his longtime friend, colleague, and Jesuit brother, Fr. John Witek, of the Chicago province, whose tenure teaching Asian history matched Sam's endurance teaching linguistics.  Some of the spark went out of Sam when John, his companion in weekly conversation, died.

Sam had a difficult transition during his first few weeks here at Campion.  It was painful to watch.  He missed his friends in D.C.--he had many--and he missed the support system at Georgetown where he spent almost half his life. There were periods of anxiety and confusion when he first arrived, but he eventually settled into the routine thanks to two men here: Father George Galarelli and Brother Ed Niziolek.  Within a few weeks of his arrival they became a kind of three musketeers, at table, walking outdoors in good weather, visiting in each others' rooms, and hanging out in general.  It was great to watch.  Jesuits taking care of each other.  There is much to learn from their example.

As promised earlier we come back to the sartorial question.  Sam was not what one would call a snazzy dresser.  He was either in clerics, with a shirt that was more faded steel gray than black, in khakis and a bland shirt showing obvious evidence of wear, or the aforementioned tennis whites.  Among the benefits of the three musketeers was that our own fashion icon, George Gallarelli, who was about the same size, immensely improved Sam's sartorial style, particularly with sweaters and shirts. Things matched. They were color coordinated. This was the new improved GQ Sam Sara.

The last months were difficult.  Parkinson's is a devastating disease. The man who played tennis several times a week, who walked about a mile each way to celebrate Mass every Sunday, to say nothing of to and from his classes on Georgetown's surprisingly hilly campus, now struggled to get out of his chair, to walk down a hallway, or to cut his food.  He accepted assistance with grace and without complaint.  On Ignatius Feast two weeks ago I was catching Sam up with the doings at Georgetown.  At dinner he allowed me to dissect his lobster without fuss, resistance, or protesting "I can do it myself."

I am grateful to Sam for his assistance and example when I was new in the Georgetown community.  The night before being admitted for bypass surgery, something Sam had already endured, I went to his room for the sacrament of the sick.  He was kind, compassionate, and calming when kindness, compassion, and a calm voice were more than necessary.

Sam's quiet competence, his dedication to his work, and  his graceful acceptance of aging and disability should be a model for all of us, Jesuit and non-Jesuit.

Eternal rest, grant unto him, O Lord
and let perpetual light shine upon him.

It seem reasonable to post a few shots from Georgetown University, Sam's home for four decades.

The first is a lantern at the main entrance to Copley Hall, an impressive dorm. 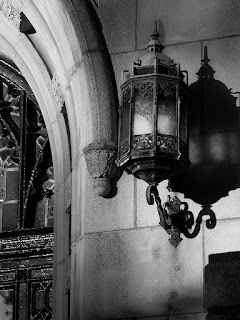 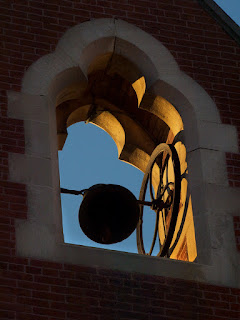 The main floor of Healey Hall 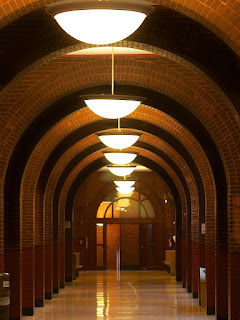 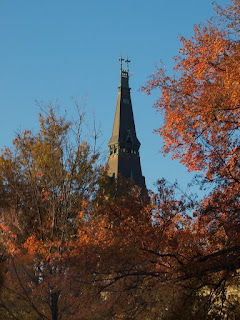 St. Ignatius of Loyola, pilgrim.  Statue in front of White-Gravenor 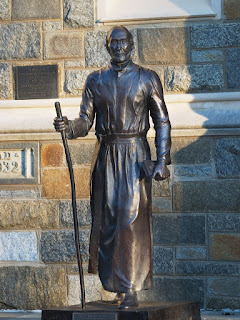