The word Advent is derived from the Latin:  ad meaning "to or toward" and venire meaning "to come"
Thus, Advent means: to come to, to move toward, to approach, to near.  English supplies many options in transations.

Advent is not a stand-alone season.  It is the beginning of the Church's liturgical year.  Advent is not a synonym for frantic shopping.  It is a time to prepare for the Nativity of Our Lord.  Advent was not created by Martha Stewart as a time to decorate and do useless craft projects.  Despite secular messages to the contrary, despite a government and many universities that would relish removing all religious associations from the word Christmas, if not banning the word itself,  Advent is a penitential season, thus, purple vestments.  No Gloria at Sunday Mass. It is a time for prayer and meditation, a time to contemplate what we will soon celebrate.

We heard in the first reading from Jeremiah:  "The days are coming when I will fulfill the promise I made to the house of Israel and Judah." Despite the promise of the covenant, those to whom God made the promise turned away repeatedly.  They forgot all that He had done for them. They placed faith only in their own selves, their own abilities, their own concept of freedom.  How very much like us when things are going particularly well.

"I will raise up for David a just shoot; he shall do what is right and just in the land."

That is the promise we recall as we prepare over the coming weeks to celebrate the Incarnation of Our Lord, the coming of Jesus toward and into our world.

The Gospel from Luke comes from the last half of Chapter 21, the end of Jesus' journey to Jerusalem.  Chapter 22 begins the narrative of the Last Supper.  Jesus isn't saying anything new here.  He isn't saying anything that he hasn't already said many times.  He hints at the the return of the Son of Man, and cautions, as He did many times, against being caught unawares, of not being prepared for that coming.  The imagery is vivid and frightening.  Signs in the heavens.  Turmoil upon the earth.  Dying of fright.  And the Son of Man coming on a cloud.  BUT . . . we do not, we cannot, and we will not know when.  Unfortunately that fact has not stopped doomsday preachers and others, from precise calculations of the timing, and sometimes even the exact location, of the parousia.

Remember the insanity fifteen years ago when the "new millennium" began?  Remember the prognostications?  Many were beyond bizarre, as were the individuals making them.  People hung onto the words of self-appointed evangelists and pseudo-theologians who were nothing more than amateur soothsayers, graduates of the Chicken Little School of Divination and Alarmism.  They spread fear and perhaps reaped a little profit—profit with an ‘f’ not a ‘ph’.  The rapturists expected to be taken up bodily.  Major craziness to be sure.  A good rule of thumb is: The more specific the prediction as to time, place, and other details of the parousia, the second coming of Jesus, the rapture, or the end of time, or whatever one chooses to call it,  the more worthy it is of derision or, if you are so inclined, hysterical, fall-on-the-floor-while-wiping-tears-from-your-eyes laughter.

As we begin this holy season, as we gaze at the single candle in the Advent wreathe, a wreathe that will be fully lit before we have time to catch our breaths, we are called to sing in gratitude with the psalmist:

"Your way, O Lord, make known to me
teach me your paths,
Guide me in your truth and teach me. . .
All the paths of the Lord
are kindness and constancy
toward those who keep his covenant. . .”

First Sunday of Advent.  Finally.  It is the beginning of the new liturgical year.  The Gospel of Luke will predominate on Sundays.  And the readings from year II will take over the weekday Masses.  It is one of my favorite times of the year, in some ways more so than the post-Christmas days.

These pine cones of some type were OK in color.  Black and white allowed me to play with the light, contrast and texture. 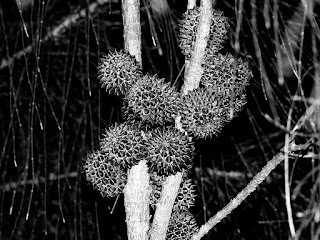 There is a cemetery at Sevenhill, South Australia where we made the tertian long retreat.  The representation of the Jesuit seal represents a lot of work on the computer as the seal over the entrance was suspended by two iron bars.  I erased them. 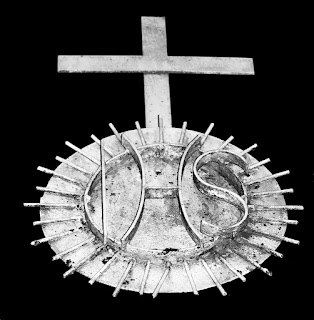 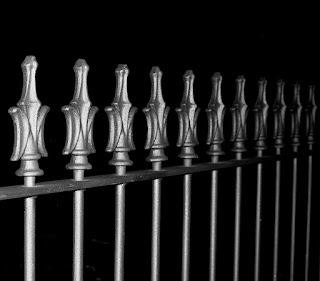 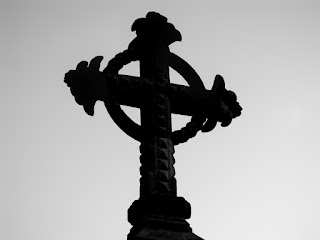 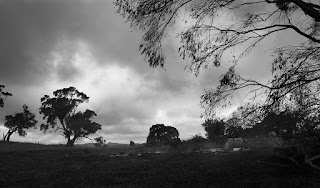 The Penultimate Sunday of the Liturgical Year

The apocalyptic tenor of today's readings and Gospel tells us that the end of the liturgical year is approaching.  Next Sunday, the Feast of Christ the King, marks the end of the year. The following Sunday, the first Sunday of Advent, begins a new Church year.  The Gospel of Mark will be replaced by Luke on Sundays.  Year I will replace Year II in the daily readings.

Apocalyptic is a genre that strikes fear in the hearts of preachers, bizarre thinking in the minds of millennialists, and perplexity in most of the rest of the faithful.   Apocalyptic is many things.   Ancient Near Eastern science fiction is not one of those things.  Apocalyptic is a literature of hope.  It is a literature of hope that emerged during times of persecution.  The imagery is odd and, at times, plainly weird.  It is, however, neither bizarre nor odd to those for whom it was written.  Apocalyptic was a means of engendering hope in those suffering persecution while hiding the message from the persecutors.  Even today some of the symbolism and meaning in apocalyptic remains hidden from interpreters and commentators.

One of the unhealthy ways of meditating on readings such as these readings that describe those who will be saved and those who won't, is to assume oneself among the saved, then to make a list of family, friends, and co-religionists who will be among the elect. Then make another list of co-workers, the date who stood you up for the prom, a particularly unhelpful family member, and those whose religious thought is different from yours, and assign them among those not destined to be saved.  Dante, of course, created a masterpiece out of such thinking, but most of us are not Dante.

The reading from Daniel appears toward the end of the book.  It is less obscure than much of what precedes it.  But, for the time it was radical.  It was radical in its description of the resurrection of the dead and, even more radical with the mention of life everlasting.

Like the reading from Daniel, the Gospel, taken from what is called, Jesus' Eschatological Discourse, is not warm, cuddly, or consoling. The images are terrifying.  In the preceding verses, Jesus described the earthly manifestations of the tribulation: reports of wars, earthquake, famine and a general breakdown of society.  It reads like the headlines in today's papers.  In today's reading Jesus details the cosmic signs that will follow the earthly chaos.  The cosmic signs also sound as if they were taken from contemporary headlines. The earthly and cosmic signs of Jesus coming have been happening for millennia. They will continue to happen until time ceases to exist.

Just as the Church repeats the liturgical cycles from Advent to the Feast of Christ the King, the signs of end of times continue to cycle.  Thus we see the problem of time as we understand it.  Our time and God's time are not at all the same.  The first words of Genesis, the first book of the Old Testament are: "In the beginning God created the heavens and the earth."  The penultimate verse of Revelation the final book of the New Testament is: "Surely I am coming soon."  All of Scripture is contained within a parenthesis of time: the beginning of time and the end of time.  God's time not ours.

God transcends both cosmic time, the rhythms of nature, the cycle of days and nights, of seasons and epochs.  But He also transcends and transforms historical time, the only concept of time with which we are comfortable, the form of time we have superimposed over cosmic time.  Thus, most of us are preparing for Christmas 2015.  A birthday may have passed or it may be on the horizon. Tomorrow afternoon is already booked.  The date on which one will die is a mystery.

Prognostication has been a fact of life since ancient times.  Nostradamus. Tarot cards and other pagan divinations.  The Farmer's Almanac. The Weather Channel (highly suspect prognostications).  And the new religion of global warming.  We want to know the how, the why, and the when.  It is not for us to know.  "But of that day or hour, no one knows, neither the angels in heaven, nor the Son, but only the Father."  Most of us will never be comfortable with that saying.

The weather was spectacular.  On Saturday and Sunday the four of us wandered campus.  While I enjoyed the wandering, company of others is not the ideal situation for photography.  Monday was a different story.  I was alone.  Spent four hours on campus with the camera.  Below are some of the results.  I will be editing for quite a long time and post-processing even longer.

Most of the photos are a study of Old Main, my favorite building on the face of the earth.  It was a very different building when my dad graduated in 1927.  A fire in the then small bell tower resulted in the building being dismantled and the stones reassembled into a new building with the addition of the front portico and a much taller and more graceful bell tower.

These two are from the top of the Pugh Street parking garage.  I took a few during the summer but the leaves obscured most of the building. 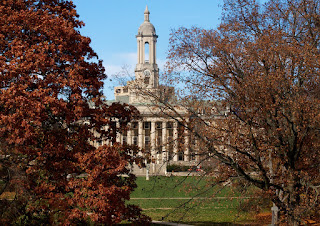 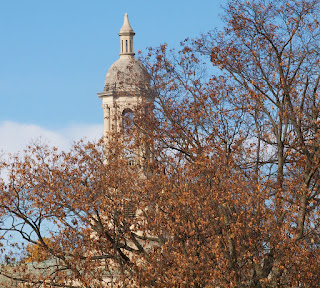 This is one of my favorite views from the southeast side of the mall just at the top of a short flight of steps near the College of Health and Human Development. 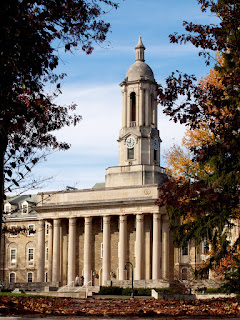 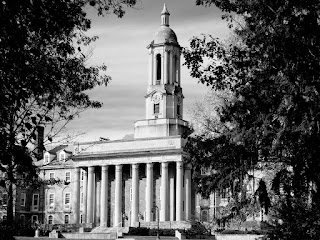 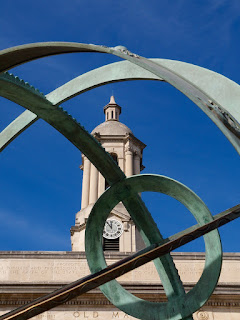 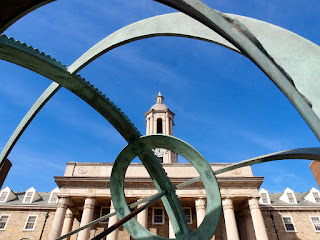 A close up of the columns. 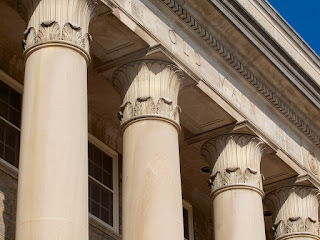 I spent some time in the arboretum.  Will post more of those later.  However, I spent some time playing with the post-processing to create something a bit more whimsical.  There is a bit of an Asian silk aspect to it. 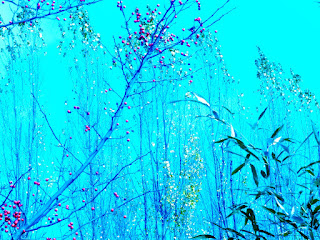