Commemoration of the Most Holy Name of the Blessed Virgin Mary

Today, however, we hear another sound that echoed through the universe.  It is a sound that continues to echo, though it will not endure in the manner of Mary’s yes.  It is the sound of terror.  It is a sound to which we shrieked NO.  Fourteen years ago today we were walking around in a catatonic-like state.  The full extent of the tragedy was still unraveling.  New York City.  Washington, D.C.  Shanksville, PA.  Terrorist-caused plane crashes in all three.

Fourteen years ago today was the first full day following the September 11 tragedy.  The tally of deaths was still climbing.  Fourteen years ago today the communal shriek of NO!! contrasted with a strange silence. The flight paths in all major metropolitan areas, and even minor ones, were empty. The country was on an aviation lockdown. The silence was occasionally interrupted by the sound of jet fighters patrolling the sky but the comforting roar of the jets departing from and landing at city airports was absent.  It was an eerie silence.  Millions screamed GOD! WHY?  Their screams were greeted by the same eerie silence.  Those whys continue to echo today and we hear the same silence in response.  Good trees and rotten trees were destroyed in equal measure without attention to which was which.  We remain perplexed.  We continue to utter WHY?

Only a fool would stand in a pulpit and answer that why.  Only unadulterated hubris would permit anyone to survey the devastation and explain it.  Only the most arrogant would interrupt the silence following the blast with babble.  Sometimes we can only sit in and with the silence and listen.

In the silence that continues since the terrorist attack we hear nothing. We hear nothing until we listen more closely. Then we hear Mary’s yes.

Blessed art though amongst women.
Blessed is the fruit of thy womb.
Jesus.


I celebrated and preached at 6 Masses and concelebrated two others.  It was a  prayerful and very revealing retreat.  Will have much to ponder over the coming year.

There were photo opportunities.  Some of them are below.

I was wandering through a parking lot.  There was a pile of what looked like railroad ties covered with plant life and a broken jar.  The reds were fantastic.  I took close to 100 shots of the jar.  Maybe I got what I was looking for but a lot of post-processing remains to be done. 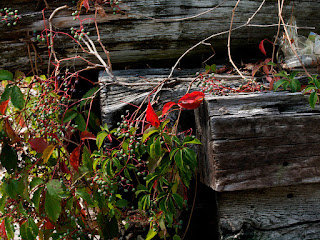 The gladiola is not a particularly favorite flower.  Saw too many of them in bad funeral bouquet arrangements, always in a triangular shape, when I was an altar boy.  When I finally arrived at the Abbey in time for vespers (it was a LONG drive with the traffic) I stopped in my tracks upon seeing the gladioli that Mother Margaret Georgina had arranged.  They were being backlit and flooded with sunlight.  The colors almost vibrated.  Alas, the best light was during vespers, hardly a time I could crawl around on the floor with the camera.  But I was able to return at various times to catch other light. 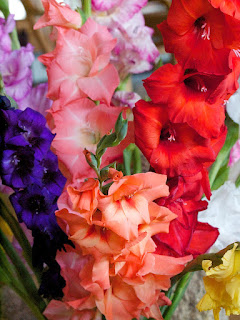 Some of the buds were disarticulated from the stem and placed in the small rock font on the floor. 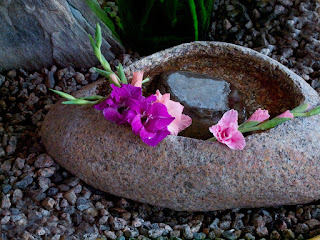 This is my favorite of all the gladiola shots.  The light was a problem  I took multiple exposures at various parameters and shot RAW.  More than pleased with the chiaroscuro.  Did very little processing here except to straighten and crop a little bit. 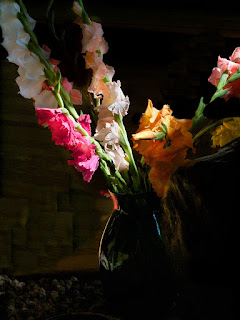