The role of a prophet is a very difficult one.  Jeremiah lived during one of the most crucial and terrifying periods in the history of the Jewish people, a time that encompassed the destruction of Solomon's Temple and the beginning of the Babylonian exile.  He did not have it easy.

The Jewish Study Bible notes that, Jeremiah "tells the reader more about himself than any other prophet, including his anguish and empathy at the suffering of his people, and his outrage at God for forcing him to speak such terrible words of judgment against his own nation."  Today's reading comes from the first chapter of Jeremiah. There are many details to follow.  But we already had a preview of what was to come in this reading:

"They will fight against you but not prevail over you,
for I am with you to deliver you, says the LORD."

Jeremiah railed against God for the message he had to bring to his people.  He faced hostile opposition. The opposition was particularly strong when he preached the need for the people to observe the teachings and moral injunctions of God's law in the Torah.  We should not be surprised by that hostility. He reminded the people that they had failed to observe their part of the covenant. He reminded them that they had ignored the law given to Moses on Sinai.

The people of Jesus' time were no more receptive to the reminders that they had failed to observe the covenant.  In fact, as we hear in today's Gospel, the people became murderously hostile in response to Jesus' preaching.

The Gospel shows an interesting change.  In verse 22 we hear, "And all spoke highly of him, and were amazed at the gracious words that came from his mouth."  Six verses later we read, "When the people of the synagogue heard this they were filled with fury."  What happened? Jesus told his listeners the truth.  He confronted his hearers with reality: they had been unfaithful to the covenant.
Jesus reminded them that during periods of trial in the past God came not to the people of Israel, the people who had been unfaithful, but to the alien, to the Gentile, to the outsider.  Jesus reminded God's chosen people that they had not held up their end of the bargain.  The people, however, did not appreciate being told the truth.  As is true today, only positive affirmations are appreciated.  Good job! That was great!  Even when it was mediocre at best to say nothing of absolutely terrible.  It is not easy to be a prophet.  It is not easy to tell the truth. It is not easy to point out the obvious to those who do not wish to hear, to those who do not wish to see.
The truth is part of the challenge in Paul's First Letter to the Corinthians.  Paul wrote with remarkable economy.  In just thirteen verses he makes three important points about love. The superiority of love and the need for it.  The characteristics of love, both what it is and what it is not.  And finally that love endures forever.  Paul includes seven positive attributes of love:  patient, kind bearing all things, and so on.  Perhaps more significantly, Paul gives eight examples of what love is not.  Think about it, sometimes it is easier to describe a virtue by listing what it is not rather than defining what it is.

This thirteenth Chapter of First Corinthians is sometimes called the Hymn to Charity or the Hymn to Love.  Yes, Paul described love's grandeur but he also listed the demands that love makes. These are demands that we confront daily no matter our state in life:  married, single, widowed, or in religious vows of poverty, chastity and obedience.  It should not come as a surprise that this reading is frequently chosen for weddings.  But Paul's description of love has little to do with the desire, the sometimes selfish desire, for physical passionate possession.  Given the divorce statistics today it is unlikely that many couples understand the meaning of what Paul wrote.

Paul's definition of love is not as simple as it looks on the surface.  He is not describing the modern, romantic, soft-focus photo, moonlight and roses, understanding of love.  It may be love when we help someone during a bad time in his or her life.  It IS love when we graciously accept the same person's help without minimizing or deflecting it when we are in need ourselves.  It may be love when the bride and groom emerge from the church to the cheers of family and well-wishers.  It IS love when the 80 year-old man spoon feeds his wife of 55 years even though she no longer recognizes him because she has Alzheimer's.


The travel to Slovenia was terrific.  I had three seats on the leg from Boston to Frankfurt.  Though there was a five hour layover in Frankfurt it wasn't bad as the airport supplies free internet.  Are you listening American airports?????  Short hop to Ljubljana (heretofore abbreviated LJ).  It was a busy day.  At 9 PM Peter and I drove to Maribor, 60 miles to the northeast where we remained until the following afternoon.

While at Maribor I went with a friend of Peter's who works for Karitas, a Catholic relief organization.  We drove twenty minutes to the Austrian border.  After I was given a tour of the crossing point we waited for the train bearing Middle Eastern refugees bound for either Austria or Germany.  It was a fascinating experience to say the least.  I expect to go back a few times over the next three weeks as we will be bouncing between LJ and Maribor about twice weekly.

Back to LJ yesterday.  LJ is a charming city.  The community is not far from the old section of the city.  It is a photography smorgasbord, a smorgasbord from which I intend to overfill my photographic plate.  Most notable is the cleanliness of the city, both cities actually.  No litter.  Very small amount of graffiti that almost seems to be put there for artistic effect.  The photos below are from a short walk with one of the older fathers the day I arrived and then from a short solo walk in Maribor the following morning.

The Franciscan church at the end of the three bridges.  One of the most famous landmarks in LJ. 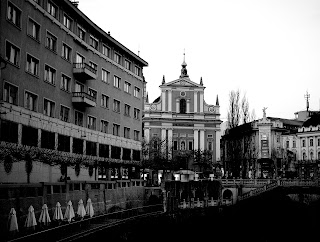 The Franciscan church at sunset. 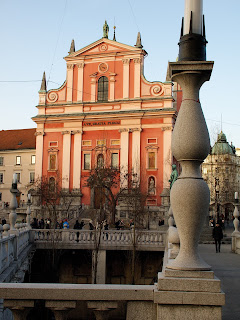 A silhouette of the opera house. 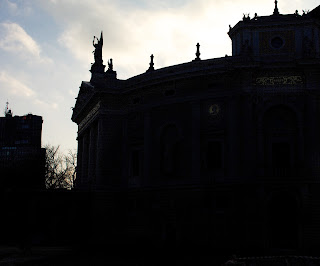 Votive candles in the Orthodox Cathedral.  There were no holes or spikes for the candles.  They were held upright by melted wax on the bottom. 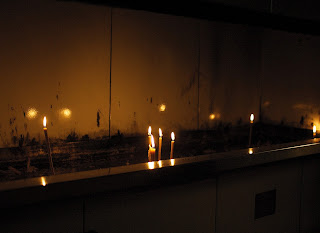 The Orthodox Cathedral as seen from the art museum 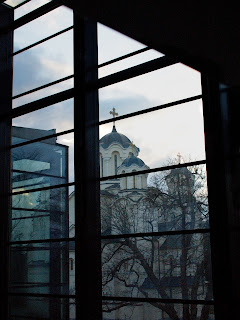 View of Maribor from the bridge.  The bridge was about five minutes from the community.  I have keys for rooms in both the LJ and Maribor communities. 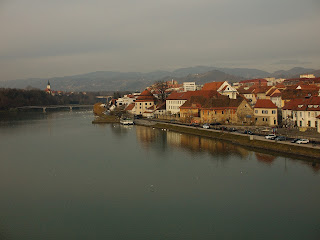 A man emerging from a cafe in the morning in Maribor. 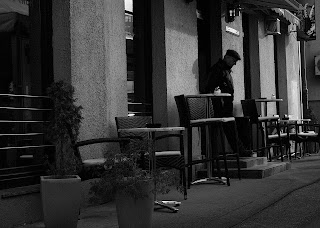 A yarn shop in Maribor. 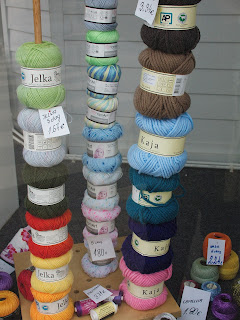 On the Road Again

Commentaries describe verses 10 to 12 of this Gospel as obscure and difficult. “The mystery of the Kingdom of God has been granted to you. But to those outside everything comes in parables, so that they may look and see but not perceive, and hear and listen but not understand, in order that they may not be converted and be forgiven.”

If there were ever words that could be used  to justify sectarianism and exclusivism these are prime examples.  However, 'I'm-in-with-the-in-crowd' thinking is not the only way to approach this parable. It is a misnamed parable. It is not about the sower. It is about the seeds and the quality of the soil where they land.

The seeds are distributed to all people.  In the first example the recipients reject the seeds out of arrogance.  They are then condemned because they first rejected God.  They may be irredeemable.

The second and third examples are fascinating because they reflect reality for many.  Without roots in prayer and meditation on God’s word, it is easy to reject God with the petulance of a cranky three year-old the moment life gets difficult.  Tribulation and suffering define what it means to be human. They are not an excuse to fall away or reject God.

The lure of riches and material goods, Jesus' third example, may be more subtle.  Gradually one has fallen away from prayer, from meditating on God’s word, from participation in the sacraments. Eventually one live in a world of egocentrism and self-fulfillment.

I suspect we all want to see ourselves as fertile, rich and fragrant soil.  And in fact we are.  Initially.  However, if we do not attend to the soil, if we do not monitor its condition it may become thin, contaminated, and unable to sustain us in times of trial and suffering.  If we don’t remove the thorns and weeds regularly through prayer, sacrifice, and the sacraments we too will be choked and suffocated.

It is approaching 11:30 PM.  Generally I am asleep.  However, am trying to remain awake a bit longer.  At this time tomorrow I should be on the ground in Frankfurt, Germany.  At that point there will be a five plus hour layover before a short hop to Ljubljana, Slovenia.  Will be there for three weeks.  The time will be spent between Ljubljana and Maribor, a town about 60 miles to the northwest.  There may be a side trip to Budapest.  Will be working primarily with Peter Rozic, SJ.  Peter and I lived in community in D.C. for several years.  It is his invitation to come over.

Candles are a fascinating if a bit cliched photo subject.  I take a lot of candle shots if for no other reason than doing a lot of photography in churches.

This is a bank of candles on Holy Saturday before Mass.  All candles are extinguished on Holy Thursday.  None of the votive candles are lit until after the vigil Mass.  The candles are being reflected in highly polished granite. 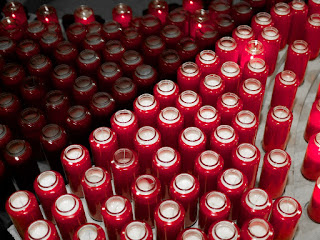 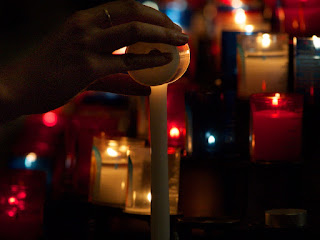 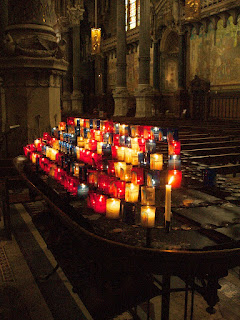 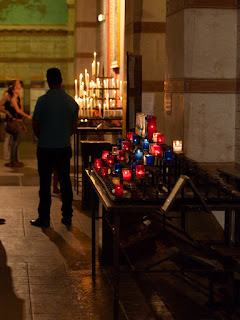 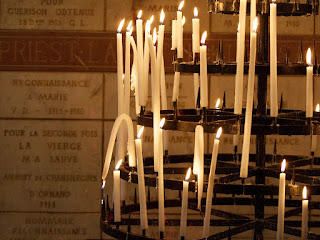