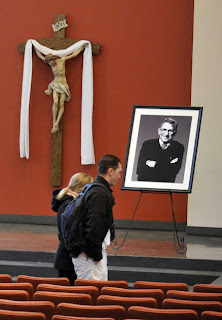 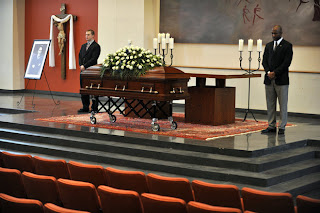 The first half-boat is part of a sculpture installation at a peace garden in Puli, Taiwan.  It fascinated me then and continues to fascinate. 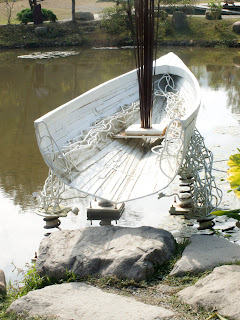 The next is a group of boats docked for the winter in Warrnambool, Victoria, Australia. 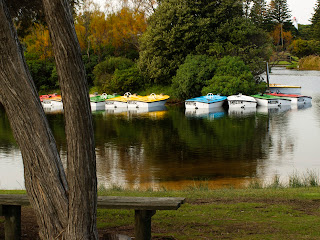 The red canoe is sitting on a dock in the marina in Port Lincoln, South Australia. 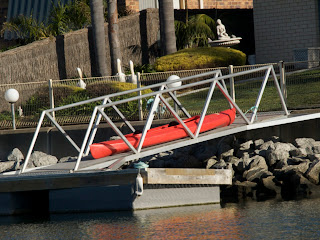 The next few are photos of boats in a "dry dock" in Coffin Bay, South Australia. 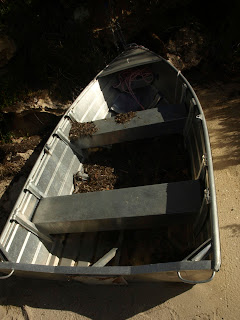 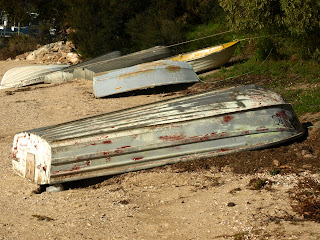 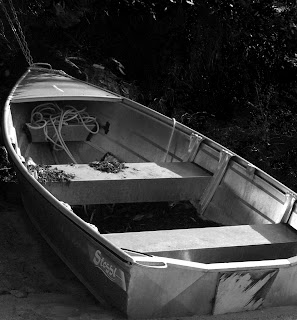 Finally some boats in the Mekong Delta that are waiting to be called into action. 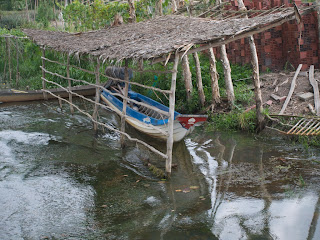 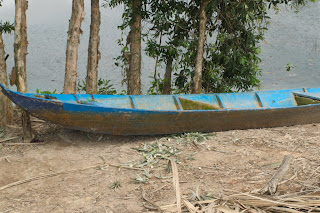 This is the weekend before the March for Life commemorating the murderous passage of Roe v. Wade.  The weather is going to be a real challenge but the marchers, many from our colleges and universities are undeterred.  Had dinner with a great group from St. Peter's College in Jersey City.

Recovery continues.  So does the fatigue.  Nap has become a favorite word.
Below is a homily for this Sunday followed by some more random photos.

Jon 3:1-5, 10
Ps 25
1 Cor 7:29-31
Mk 1:14-20
“This is the time of fulfillment.
The kingdom of God is at hand.
Repent, and believe in the gospel.”
Today’s Gospel recounts the calling of the disciples.  The narrative is historical.  It is also symbolic because we are all called to follow Jesus.  We are all called to be disciples.  We are called to be followers of Christ; followers who preach the gospel, through word and action.  We are called to preach that:
God loved us first.
God loves us last.
God loves us eternally.
God loves us from conception to the moment of death.
God loves us beyond death.
God loved us before we were born.  God loved us before we could speak.  Years before we were able to comprehend what the sounds that make up the word God meant, He loved us.  And God loves us deep into dementia when we can no longer articulate the word God.
The vigil Mass in Dahlgren Chapel this evening was The Mass for Life.  Bishop William Lori, Bishop of Bridgeport, was the principal celebrant with several of us from the community concelebrating.  Sunday morning I will lead Holy Hour, Benediction and the Rosary prior to the beginning of the 13th Annual Cardinal O'Connor Conference for Life.
There are many areas I could address.  Abortion in general is one.  Another is the recent increased suppression of religious freedom by a president who insists that church organizations must provide free birth control despite moral objections, a government that wants to require pharmacists to participate in pharmacologic abortions through dispensing "morning after pills" despite their moral convictions.  How long before Catholic hospitals and health care facilities are required to perform abortions?
One of the first acts the current president signed was the freedom of choice act legalizing partial-birth abortion, the most horrifying form of abortion.  Partial-birth abortion indicates that the child in the womb has reached 24 weeks, the age of viability, the age at which the child could potentially survive outside the womb.  While a child born at 24 weeks does not have good odds of survival, even in a neonatal ICU, partial birth abortion can be performed on a child at any age in the womb from the barely viable 24 week-old to the full-term infant of 39 or 40 weeks gestation.  To put fetal survival into context for those of you of a certain age, the Dionne quintuplets were born in 1934 at 30 weeks gestation, decades before the advent of neonatal intensive care units.  They were kept warm in a box near a wood-fired stove.  All survived into adulthood.  Two are still alive at 77 years of age.
I entered Temple Medical School in 1971.  With the exception of 1997 to 1999 when I was a Jesuit novice I have been an active physician since graduating 1975.  After ten years practicing adult internal medicine in my dad’s offices I returned to residency training in psychiatry and now specialize in geriatric psychiatry.  Obviously, I haven’t entered a delivery room, or even thought about obstetrics, in decades.  To get a handle on this I called my med school lab partner, a now-retired OB-Gyn specialist who opposes abortion, to ask about partial birth abortion.
She explained that first the baby is delivered part of the way, hence the term partial birth.  Then a variety of procedures are done to reduce the size of the baby’s head; the abortion part.  One way of doing so is to insert a large bore needle through the foramen magnum at the base of the skull and apply suction to extract the brain.  The alternative is to crush the skull with forceps.
A few years ago I was finishing up some continuing medical education on pain control across the age spectrum from infancy to extreme old age.  An unsettling fact grabbed my attention.  A fetus’ pain sensing mechanism is fully developed and functional at 29 weeks of pregnancy.  At a point slightly more than two months before full-term the child’s pain sensing mechanisms are active.  At a time only five weeks beyond the lower limit  for what is considered partial birth abortion the child feels pain the same way we do.
I am always amused—just before becoming infuriated—by animal rights activists who argue against fur or leather coats screaming, “How would you like to have your skin ripped from you?” Question?  How does it feel to have a needle puncture the base of the skull and suck out the brain without anesthesia?  How does it feel to have one’s head crushed?
Today’s Gospel calls us to be disciples.  The Gospel calls us to be disciples whose belief leads to action, even when that action is unpopular.  Today we are called to be like the prophet Jonah, who is described in The Jewish Study Bible as “the most successful prophet in the Bible.”  We are called to make our voices heard in these callous and murderous times.
Pope John Paul II of happy memory coined the term the Culture of Death to describe modern life.   We cannot afford to participate in that culture that is echoing more and loudly eugenics movements, various analogs of "ethnic cleansing" and, perhaps, moving toward the kind of life described in terrifying fashion by Kazuo Ishiguro in his novel Never Let Me Go.
The psalmist gives us our prayer today.
"Your ways, O Lord, make known to me;
teach me your paths,
guide me in your truth and teach me
for you are God my savior."
Our challenge is to preach that truth.
Our challenge is to teach the value of human life.
_____________________________________________________________
Ever wonder about palm trees?  There was a crew cutting off the dead palms from the trees lining a boulevard at Taiwan National University (Tai Da) not far from our community in Taipei.  No way I would go up in one of those buckets.  Of course I said the same thing about riding a motorcycle in Viet Nam. 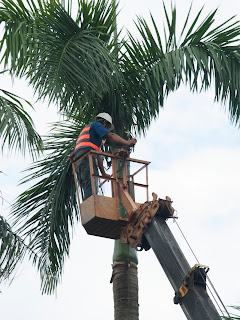 Speaking of Viet Nam.  Never trust a friend with a camera.  On the way back from our excursion on the boat John Ngoc The, SJ fell asleep.  Big mistake my friend.  Great photo though. 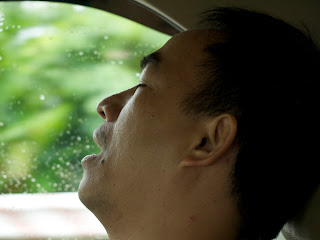 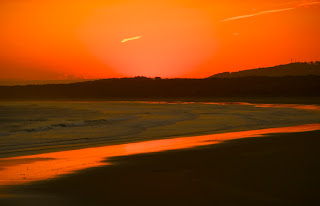 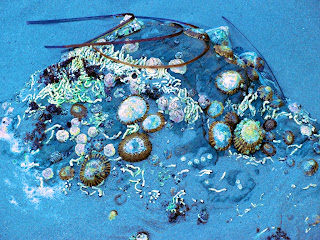 A white rose in the rain during the long retreat at Sevenhill.  This was taken at night with flash under the cover of a veranda. 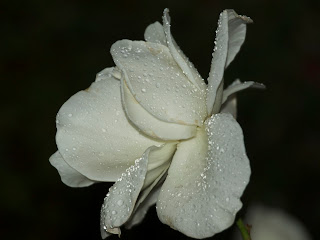 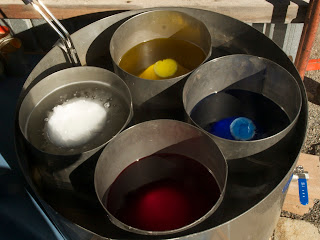 The last is a slice of life.  Poor little guy was in the Taipei Saturday Artists Market with his mom.  He was bored. 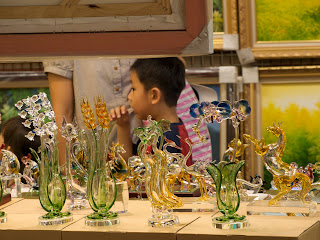 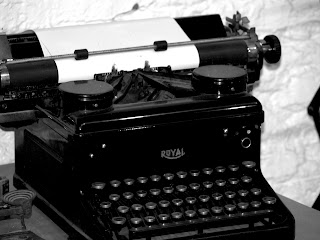 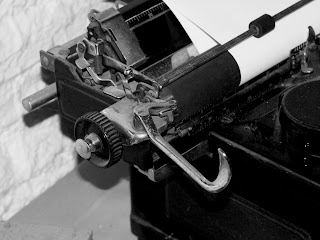 Pull out a camera and children will mug for it.  These are some of the kindergarten students in My Thu, Viet Nam. 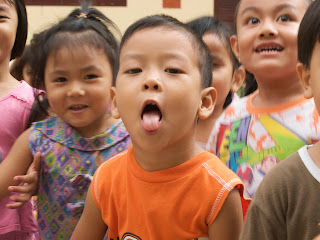 As John, Sister Cecile, and I pulled up to the motherhouse in My Thu a large procession emerged from the cathedral next door. 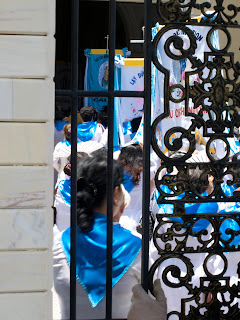 The time in Warrnambool, South Australia was frustrating because the weather was miserable.  However, in a town that had been in drought for eleven years it was not a good idea to complain.  I only managed to get to the beach two or three times in three weeks.  This photo invokes Winslow Homer's seascapes. 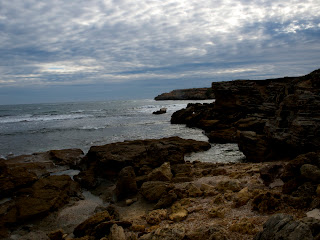 The ducklings hatched while we were making the long retreat at Sevenhill.  I went up to take photos of the rapidly growing cuties almost daily.  Love the one whose head is popping up above the others. 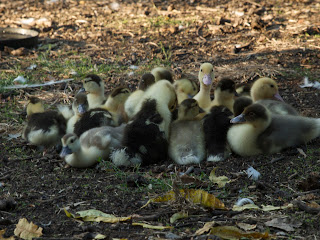 Everyone knows I love Taiwan.  The crowded streets do not annoy as much as similarly congested streets in D.C. Finally, some of the pottery at the Taipei Saturday Flower Market. 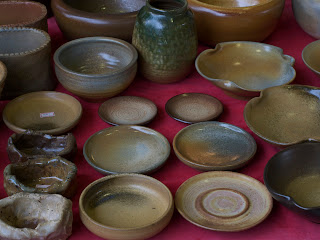 Next Saturday I will join the concelebrants for the Mass initiating the Right to Life weekend at Georgetown.  On Sunday I'll officiate at Benediction, Holy Hour and the Rosary prior to the beginning of the annual Cardinal O'Connor Conference.  Pray for the students who have worked so hard to organize this and who are not afraid to be prophets despite the unpopularity of their stance in some quarters.
+Fr. Jack, SJ, MD
Posted by Fr Jack SJ MD at 7:44 PM 1 comment: