Good Friday 2016
The Passion of Our Lord Jesus Christ (Matthew)

We hear the words The Passion of Our Lord Jesus Christ. . .
with reverence.

We stand gazing at Jesus dying on the cross . . .
in fear.

We depart the sealed tomb . . .
in anxious wonder.

Awe.
An overwhelming feeling of reverence, fear, and wonder.

It has been a long day.  It has been an odd day.
It was long because it was surreal.
It was odd because everything was off kilter.

The second reading in the breviary this morning explains it.
"Something strange is happening--
there is a great silence on earth today,
a great silence and stillness.
The whole earth keeps silence because the King is asleep."

The oddness was mercifully brief.  An hour ago fire blazed in front of this church.  The paschal candle was incised as I repeated words that explained everything.

"Christ yesterday and today
the beginning and the end.
Alpha and Omega;
all time belongs to him,
and all the ages;
to him be glory and power,
through every age for ever."

The fire from which this paschal candle was lit overcame the darkness outside.
The light that is Jesus Christ, Risen from the Dead,
overcomes the darkness within each of us.
The first of the Easter Alleluias has been sung.
There are many more to come.

Truly, this is the day the Lord has made.
Let us rejoice and be glad.
______________________________________________________________
Internet accessibility was limited at the Abbey.  Was able to post the Holy Thursday homily but no photos.  Decided to forego further frustration and wait until I got home.  Yesterday, Easter Monday, was a lick-the-wounds day.  We finished the Holy Saturday liturgy a few minutes after 11 (started at 8).  I woke at 5 and was on the road to Boston at 5:30 for Mass at Carmel Terrace afterwards.  Had dinner with the theologians in Brighton and then crashed upon getting back.  Did what had to be done yesterday and that was about it.  Among the had to be done tasks, unpacking was among them.  Maybe later today.

The total word count for the three homilies was under 500.  The liturgy of the triduum speaks for itself.  It does not need me (or any other priest) blathering very much about it.

The Altar of Repose for the Blessed Sacrament on Thursday afternoon.  After Mass the Blessed Sacrament was carried in process into the monastic choir.  Only the two priests went there.  The candles and thurible were turned over to the nuns for that part of the procession.  We then processed through the rest of the church before placing the Sacrament in the tabernacle where adoration continued through the night. 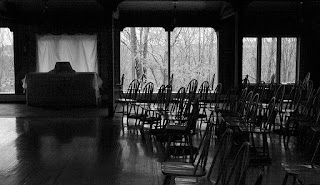 The grille from two different views. 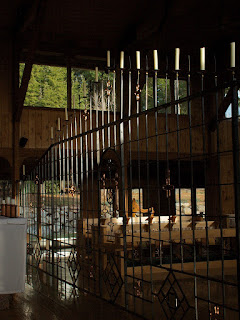 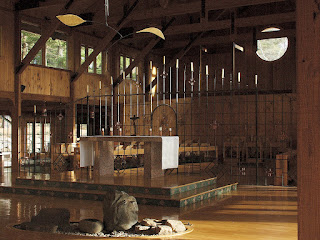 I've been taking photos of the windows in this shed for about a year.  Because vespers were not sung on Holy Thursday I was out and about with the camera in the evening. 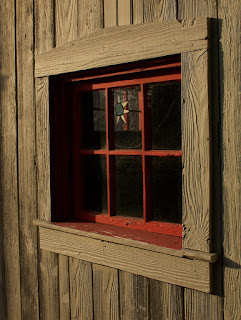 A barn at sunset.  Usually the interior of the barn is in extreme shadow.  This was the perfect time to hit it. 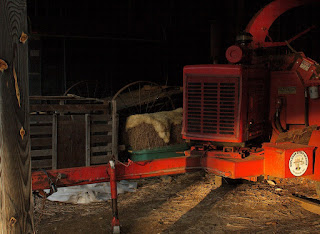 A "Still Life with Gloves and Wood" outside the barn. 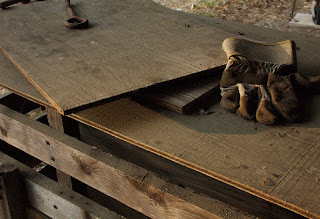 A "Still Life with Wagon and Curing Sheepskin." 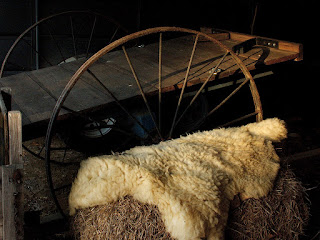 Have a Blessed Easter Season.

Jesus instituted the Eucharist at a ritual Passover meal.  That Passover meal changed the universe.  It transforms us.  Jesus expresses to us this evening the same desire he had for his apostles: "I long to share this Passover with you . . . "

Shortly after we receive the Sacred Body and Blood of Our Lord, we will carry the Blessed Sacrament in procession through the church and choir and then place it on the altar of repose where we will adore it.

And so we commemorate that Jesus led our exodus from the shadow of death into the light of eternal life. 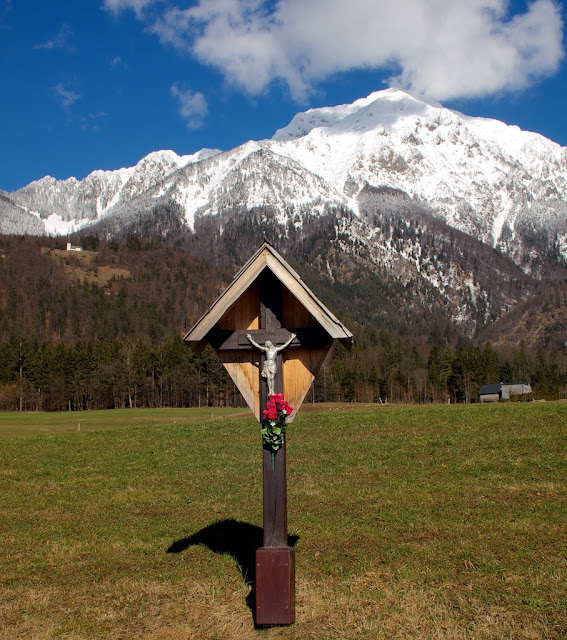 The Passion of Our Lord Jesus Christ.
The most horrifying words ever written.

The Passion of Our Lord Jesus Christ
The most consoling words ever proclaimed.

On Thursday
we will commemorate the institution
of the great gift of the Eucharist.

On Friday
the Passion will be proclaimed again.

All will lead up to the joy of the Easter Vigil.

we are weighed down by the words:

The Passion of Our Lord Jesus Christ.

Rejoice Jerusalem and all who love her. . .

The designation of laetare comes from the Latin entrance antiphon. It is an important Sunday in the progress of Lent.

In one of his many essays, Jesuit Father Jim Schall wrote, "Laetare Sunday is a respite. It makes us feel the nearness of the Passion and the Resurrection, but with a reminder that even amid the Lenten fast and the coming remembrance of the Crucifixion, we are not to forget that Christianity is a religion of joy."  He goes to explain "Christianity is a religion of joy since it knows this world is not all there is; there is something precious beyond the world."

Today's readings remind us that joy follows sorrow.  The Israelites had reason to rejoice.  After thirty days of mourning Moses’ death, Joshua led them into the land that they had been seeking for forty years. “Today I have removed the reproach of Egypt from you.”  Their punishment had ended. They ate a Passover meal from the produce of their land.  The manna with which God had fed them was no longer necessary.  It never appeared again.

The parable of the prodigal son is more than familiar.  It is a figure of speech that is used and understood by Christians, non-Christians, and even those atheists who are militantly hostile to all things of faith.  They would most likely be surprised.  It is a challenging parable that is rich with characterization, motive, action, and reaction.  Psychiatrists can have a field day treating this gospel as a case study of personality types, disorders, behaviors, and so on.

We may see ourselves in the various actors in the drama when we consider the story. Perhaps we want the immediate gratification of the younger son.  "Show me the money NOW."  Maybe we identify with the resentment of the dutiful elder son who perceived that he never had any fun. "He got a goat and clothes and you never even gave me a six-pack of Bud Light."  We may even identify with the man who said, “Sure kid, slop the hogs.  But don’t eat any of the slop.”  We probably all can identify with the prodigal’s regret at having followed a wrong path, at having made some stupid decisions.  Sounds like the sad story of so many who were temporarily flush; the whores and hangers-on were there when the money flowed, but they were gone when the cash dried up. That hasn't changed in millennia.

The father loved the son enough to let him go out on his own, well-financed and well-supplied.  The rest was up to the boy.  The son rejoiced in his new freedom.  Finally he could carouse, party, drink, make noise, and sleep around. He did all of the above.  The money went fast.  Only after he scraped rock bottom did he yearn for his father’s love.  Only when broken and wretched did he want to return to the safety of home.  After squandering everything he swallowed his pride.  He admitted his wretched state to himself and made his way back to his father. He was prepared to be treated as one of the hired help rather than a son.  But at least he would be able to eat.  He would be warm.  He would have a place to sleep. The prodigal journeyed toward home unaware that his father was desperate for him to return.  The son had been lost.  He did not know he was about to be found.

As is often the case in Jesus’ parables, the story does not have a neat ending.  There is no resolution or happily ever after.  This parable, like many others, is like seeing two acts of a three-act play. It is as if we discovered that the last chapter of an Agatha Christie who-dunnit had been ripped from the book.   We don’t know how the prodigal son behaved once he was settled and back into the routine.  We don’t know if his angry older brother reconciled with him.  All we know is that his father forgave him.  And welcomed him back.

God endowed us with free will.  He allows us to go out on our own, financed and supplied.  Like the prodigal son we sometimes mess up to the point of desperation and despair.  But like the father in the parable God forgives us and welcomes us back.  He welcomes us back again and again, more effusively than the prodigal’s father.  He welcomes us back when we admit our need for His love, confess our sins, and amend our lives.  For this reason Paul assures us,  “God has reconciled us to himself through Christ and given us the ministry of reconciliation, namely, God was reconciling the world to himself in Christ.”

Very busy Laetare Sunday.  Sister Brigid phoned at 7 AM.  The priest who generally celebrates the 11:15 Mass was ill.  I have the 9:30 at the assisted living next door.  No problem.  When sister began to apologize, ask if I was sure I assured her of my guiding philosophy.  When I was ordained I received the privilege to celebrate Mass but that does not mean I have the right to ever refuse if I can do it.   The formula changes a little if I have another commitment that cannot be changed or am ill myself (rare).  So, after the 9:30 Mass I had some coffee with residents at the assisted living and then went over to the nursing home.

Back when I was in junior high school the former St. Ann's Academy, a girl's boarding and day hop school run by the Sisters of Christian Charity had a Laetare Sunday concert by the school orchestra.  I went several times.  Oddly enough, the site of St. Ann's is now the location of Little Flower Manor, run by the Carmelite Sisters for the Aged and Infirm who also established and run the assisted living and nursing home where I was this morning (and every Sunday).

The photos below continue the tour of Slovenia.

The first three were taken at the outdoor market in Ljubljana.  It was a short walk from the community to the market.  A question.  You are putting together the ingredient basket for the first round (appetizer) of Chopped.  The following three ingredients are already in the basket.  What are you going to add as the fourth? 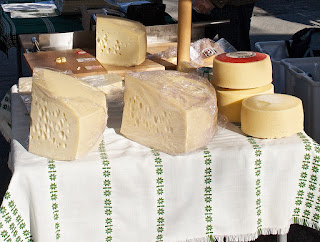 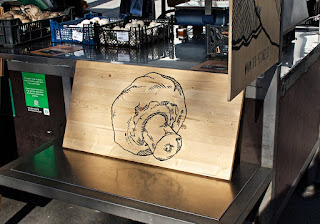 Certainly not flowers, unless they are edible.  And then I'm not too sure. However . . . 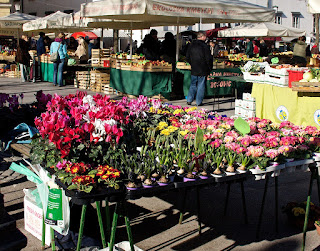 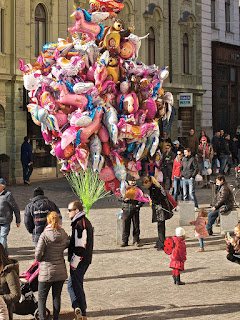 The parade.  It was nice seeing majorettes not showing their navels. 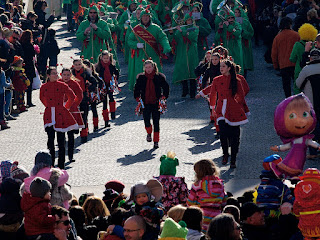 Tivoli Park is a large park in the center of Ljubljana.  It is gorgeous.  I was struck by the man sitting alone. 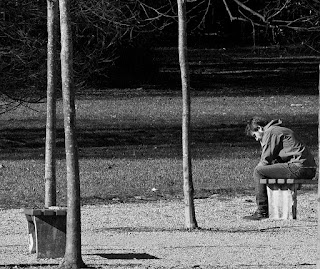 There was a small group of cafes with outdoor seating areas on the way to the center.  It was the most direct route from the community to the market.  I took several photos of people sitting at the cafe.  This photo was cropped.  There was another table with two women but also the ugly front end of a car.  He appears to be in a different mood than the man above.
I like the mostly monochrome and the rope hanging off to the left. 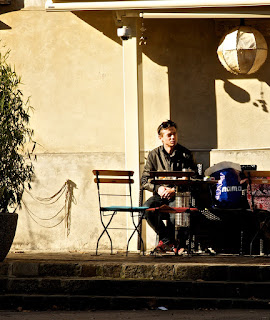