Feast of the Nativity of the Blessed Virgin Mary

“From you shall come forth for me one who is to be ruler in Israel
whose origin is from of old from ancient times.”

The first reading gives the reason for proclaiming the genealogy according to Matthew, a Gospel reading that is frequently a problem all around.

The long list of names strikes terror in the hearts of preachers and confusion in the minds of hearers.   It is almost like the jokes about reading the phone book.  Why proclaim it?  There is no plot, no message and no point.  However, those are three misconceptions.  All three are grossly in error.  There is a compressed plot, a strong message, and a crucial point. The genealogies in scripture tell us a great deal.

Only a dyed in the wool fundamentalist  would consider the genealogy an historical record, complete with birth certificates to confirm each name.
Only a fool would try to reconcile each and every name with some sort of historical record.  No, there was no send-in-a-blood-sample-and-get-your-DNA- profile craze in the Ancient Near East.

Though difficult for the modern reader the genealogy teaches an important lesson.  It brings the entirety of Old Testament history and thought into the Gospel. It demonstrates something one hears in scripture class: If you want to know and understand Jesus, read the Old Testament,  because one cannot understand the New Testament without knowing the Old.  There is no possible refutation of that claim.

Matthew’s genealogy begins with Abraham and moves down to David.  (David is the one Micah means when he says, “whose origin is from of old, from ancient times.”)  It then continues down through David’s line to Jesus’ perceived father on earth, Joseph and his wife Mary whose Nativity we celebrate today.

For Matthew’s Jewish-Christian community this genealogy had very important social, political, and religious implications.  He includes the names of three women and the mention of a fourth (whose name is no mystery). The four women are so different that it is almost impossible to find a common thread among them:

Ruth—a righteous woman devoted to her mother-in-law Naomi, who remained with her after her (Ruth's) widowhood.

Bathsheeba—the one whose name goes unmentioned, was the wife of Uriah the Hittite.   She conceived her first child in an adulterous relationship with David.

The fifth woman in the genealogy is Mary, the Immaculate Conception, the Theotokos, the Mother of God.

We know nothing of her genealogy except through the undocumented tradition that her parents were named Joachim and Ann.  Mary would have been anonymous except for one yes.  Today we celebrate the birth of the woman whose fiat, whose yes, changed the history of the universe

“Behold I am the handmaid of the Lord; let it be to me according to your word”

The photos of various depictions of the the BVM come from several parts of the world, two from France, one from Taiwan, and two from the U.S.  Had I the time I could come up with many more but that would require combing through many files.  Some of these have already been posted here but it seemed reasonable to do so again.

The statue of Mary at Campion Center in Weston, MA. 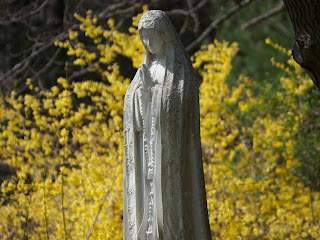 Mary overlooking the harbor in Cohasset, MA as the sun sets. 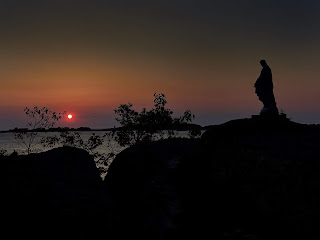 Mary with child in the Jesuit chapel at Tien Educational Center in Taipei, Taiwan.  The photo was taken in January 2011 while I was on the way to Australia for tertianship. 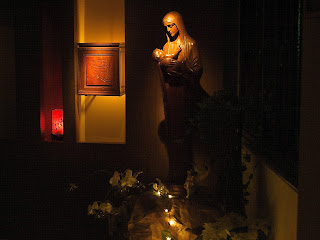 The Cathedral of St. Jean in Lyon, France.  The splashes of color on the wall are from the primarily red and blue stained glass above and behind me. 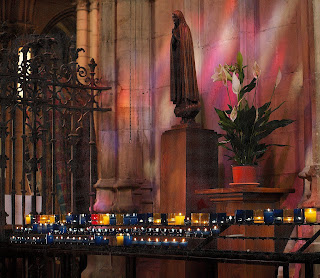 Once more in Lyon, this time in the chapel at the Jesuit residence on Rue Sala.  A photo like this is the reason to carry a camera at all times. 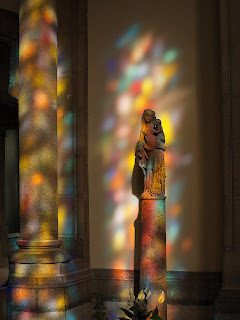