Homily for the 5th Sunday of Lent

In the context of today, the readings and the responsorial psalm are both a reminder and a consolation.  The modern world is being forced to confront the reality and unpredictability of illness and death, a reality that was more familiar during times of plague throughout history before the discovery of antibiotics and other health measures.  Even as recently as a century ago the Spanish flu, reminded the world, still in throes of recovering from WW I, of fundamental realities.  Since 1919 medical progress has resulted in a life expectancy that shot up from 49 years of age to almost 80 years of age.  With progress however, comes new complications and new risks.

Ezekiel begins with a promise:
"Thus says the Lord God:
I will open your graves
and have you rise from them."

The responsorial psalm, Psalm 130 known as De Profundis from the first two words in Latin, is a psalm for today.  It is one of the most beautiful and evocative psalms in the entire psalter.

Out of the depths I cry to you, Lord.
Lord, hear my voice.

We call to the Lord out of the depths of our anguish, our current world anguish and the anguish we've experienced over the years and decades, the personal and private pain we may or may not be able to share with others.  We call from the tomb--self-imposed and imposed upon us--in which we find ourselves again and again.  The psalm reminds us that we call to the Lord who hears our plea; the Lord who forgives our sins.  We wonder if we can forgive ourselves or others.  We implore the Lord for the optimism of a new day, a new dawn, that we eagerly await.  Psalm 130 is short, a mere eight verses.  Read it and meditate on it.

In his commentary on this Gospel  the late Jesuit Father Stanley Marrow points out the fundamental difference between Lazarus, the son of the widow of Nain, the daughter of Jairus; and Jesus. If one were forced to choose only two words to describe that difference they would be reanimation and resurrection.  Lazarus, the widow’s son, and the young girl were reanimated for a period of time, only to die later.  Miraculous?  Yes.  It is not unlike the modern miracle of cardiac resuscitation or the miracles wrought daily in hospitals throughout the world.  We can and do bring people back from that edge, even when they seem to have crossed it.  However, these are temporary stays of death at best.   Only Jesus was resurrected from the dead never to die again.

If Lazarus is us so is Martha.  The same Martha who complained to Jesus about Mary's inactivity in Jesus' presence  now makes a profound act of faith,  “Lord, if you had been here, my brother would not have died.  But even now I know that whatever you ask of God, God will give you.”   And then  the climax of this narrative:

It is not that we will not die to this life.  Jesus is not promising that we won’t become ill and suffer. Our deaths may come quickly without time to prepare.  Our deaths may signify the end of a slow but easy passage from this life; a deep sigh at the end and nothing more.  Or we may die after a prolonged period of pain, suffering, and decay.  The mode of death is not ours to choose, particularly in the planned killing of the sick elderly or the unwanted child.  What Jesus is promising is that, in Stanley’s words, “the eternal life which we possess here and now cannot and will not be interrupted even by death.”

We cry to the Lord out of the depths.
The Lord answers with kindness and plenteous redemption.
What more could  we want? 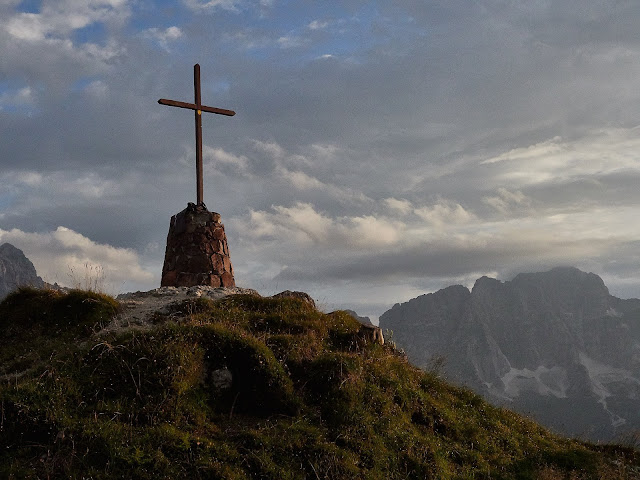 The cross on top of sv. Višarje, a site of pilgrimage in the Julian Alps in Italy, barely across the borders with Slovenia and Austria.  It recalls the motto of the Carthusian Order. Stat Crux Dum Volvitur Orbis (The Cross Stands Firm While the World Turns)

There are Carthusian houses in all three countries.

The Vigil of the Solemnity of the Annunciation

Tomorrow is the Solemnity of the Annunciation of the Lord. It is the day on which we commemorate and celebrate Mary's yes in response to the angel:

Behold, I am the handmaid of the Lord,
may it be done unto me according to your word."

I will post my homily tomorrow morning.  Attached here is a YouTube of Franz Biebl's 'Ave Maria' in the form of the Angelus, a traditional prayer said three times daily; typically at 6 AM, noon, and 6 PM.

Biebl originally wrote the Ave Maria for acapella four part men's chorus which is the version I put up here.  He later made arrangements for four-part mixed chorus and women's chorus.  There are many YouTube recordings, simply type in his name and Ave Maria.  Hundreds of versions.  The video is a little distracting, flipping as it does between the performance and rehearsal.

(you may need to copy and paste into browser)

The Angelus includes three versicles and responses followed by the recitation of the Hail Mary.

Angelus Domini nuntiavit Mariae
Et concepit de Spiritu sancto.
(The angel of the Lord declared unto Mary
and she conceived by the Holy Spirit)

Maria dixit: Ecce ancilla Domini.
Fiat mihi secundum verbum tuum.
(Mary replied: Behold the Handmaid of the Lord,
May it be done unto me according to your word)

Et Verbum caro factum est
Et habitavit in nobis.
(And the Word was made flesh,
and dwelt among us)

Homily for Laetare Sunday (4th Sunday of Lent)
1 Sm 16;1B, 6-7, 10-13A
Eph 5:8-14
Jn 9:1-41
"Laetare Jerusalem:
et conventum facite omnes
qui diligitis eam:
gaudete cum laetitia,
qui in tristitia fuistis . . ."
"Rejoice oh Jerusalem
and all who love her.
Be joyful,
all who were in mourning . . ."
The name of Laetare Sunday comes from the first Latin word of the entrance antiphon, Laetare. Rejoice. In one of his many essays written during 40 years teaching at Georgetown, the late Jesuit Father Jim Schall wrote: "Laetare Sunday is traditionally called a respite. It makes us begin to feel the nearness of the Passion and the Resurrection, but with a reminder that even amid the Lenten fast and the coming remembrance of the Crucifixion, we are not to forget that Christianity is a religion of joy."
Fr. Schall continues, "Christianity is called the most worldly of the religions. It is called the most worldly of religions because it is a religion engaged with the world and in the world, but it is not of the world. Christianity transcends the world, it goes beyond the world and the universe. It will not cease when the world ends or when the universe involutes on itself." Like Mary's fiat to the angel, "may it be done to me according to your word," indeed, because of her fiat, Christianity will persist beyond the persistence of the world.
Schall then makes an important observations, "Christianity is also the happiest religion since it knows this world is not all there is. There is something precious beyond the world. The world is not a bad place. It gives us enough room to relax in, if we don't expect of the world more than it can give, or if we don't see the world for what it is not."
Seeing the world for what it is and what it is not, is the caution Paul gave to the Ephesians.
“Take no part in the fruitless works of darkness, rather, expose them. . . "
“Live as children of the light, for light produces every kind of goodness, and righteousness, and truth.” . . .
“Awake, O sleeper, and arise from the dead, and Christ will give you light.”
Christ will give us the same light that he gave the man born blind, a gift given despite the cynicism of the Pharisees and others. The same kind cynicism and hostility often directed at those who profess their faith in Christ and manifest that faith in their way of life.
Soon the darkness of life today--a new and unexpected darkness hovering over all the world causing a global and individual anxiety-- will be replaced by the light of Christ. A light that shines through quarantine, surmounts social distancing, and any other obstructions. Even if the public celebrations of the liturgy are held in check by covid, the Holy Saturday liturgy will continue at least in enclosed monastic communities that have practiced self-isolation for centuries. The liturgies will be celebrated for all of us who are constrained by the reality of disease and the cautious response to same.
The Easter Vigil on Holy Saturday begins with the blessing of the fire from which the paschal candle is lit. As he incises the candle before lighting it, the priest intones the words that explain our faith in one sentence:
"Christ yesterday and today
the beginning and the end.
Alpha and Omega;
all time belongs to him,
and all the ages;
to him be glory and power,
through every age for ever."
Soon our mourning, despite the oddness of today's reality, will be replaced by joy. It will not be the short respite of Laetare Sunday but the unfettered joy of Easter, a joy we will carry forth for weeks, despite quarantine, televised Masses, and an overall national anxiety.
The darkness of death will be overwhelmed by the light of eternal life. Like the man born blind in today's Gospel, we will see with unclouded vision. Unlike the man born blind, we will not be confused about who gave us our sight.
We know the source of the light. And thus we rejoice.
"Laetare Jerusalem:
et conventum facite omnes
qui diligitis eam:
gaudete cum laetitia . . . "
____________________________________________
It is a very odd Lent. Am going to reread Albert Camus' 'The Plague' for about the tenth time since I first read it as a second year medical resident. It is not an exaggeration to say that it was, if not a life changer certainly had a huge impact on my future, first as a physician and then as a Jesuit priest. My old battered, underlined, sticky tab book is sitting on the bed to be started tonight. Except for editing a (brilliant) STL thesis by a Chinese priest friend and perhaps working on some lectures there is not a lot on the agenda. Going to try to get out with the camera over the next days. BC's campus is completely socially distanted.
I am struck by the increasing paranoia and restrictions that seem to ignore certain basic facts about a virus. Sometimes it seems as if it is being perceived like Sarin gas in the subway. Go outside and die. Which is total BS.

One of the chapels at the Shrine of the Immaculate Conception in Washington, DC.  The prayer on the altar is:  Heart of Mary Pray for Us.  Short and easy to repeat multiple times during the day. 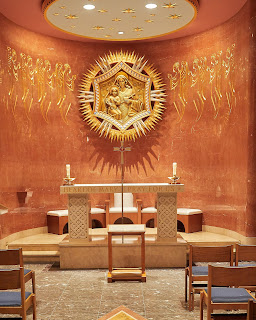 A sun-catcher at the Charterhouse of the Transfiguration in Vermont.  It is the seal of the Carthusian Order.  The Latin Motto:  Stat Crux Dum Volvitur Orbis translates as something crucial to remember today:  The Cross Stands Firm as the World Turns. 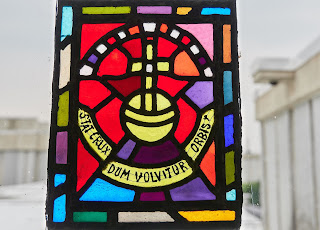