In his reflection on the Great Feast of the Nativity of Our Lord, Saint Leo the Great, pope, wrote, ". . .  today our Savior is born; let us rejoice.  Sadness should have no place on the birthday of life.  The fear of death has been swallowed up; life brings us joy with the promise of eternal happiness . . . Our Lord, victor over sin and death . . . came to free us. . ."
This evening we gather to recall and celebrate the birth of Jesus, Son of God, Son of Mary the Theotokos.  We gather to celebrate the birth of the Christ, the Messiah, the Anointed One who redeemed us from sin and freed us from death.  We cannot help but be joyful.

Matthew's description of Jesus' birth does not focus on the events surrounding that birth. Matthew describes the events leading up to His birth. There is no mention of Caesar Augustus, inns, shepherds or oxen.  Matthew does not include the words Gloria in Excelsis Deo as will be proclaimed in Luke's Gospel at Mass later tonight.  Rather, the Gospel just proclaimed informs us of Jesus' lineage and the circumstances leading to the events that are more fully detailed in Luke's Gospel.  The genealogy that begins the first chapter of Matthew's Gospel traces Jesus' descent from Abraham through David to Joseph, the husband of Mary.  Everything we hear was foretold by the prophets.  Jesus is the fulfillment of those prophecies.

The second half of the Gospel reading tells us something about the social customs surrounding marriage in the Ancient Near East.  Some of these customs seem odd compared to life in the West in these 2000 plus years following Jesus' birth.  Marriage involved the families not the couple.  Love had nothing to do with it.  A legal contract went into effect at the time of the betrothal.  Betrothal could last up to a few years before the woman moved into her husband's house.  It is at the point that Mary was preparing to move into Joseph's house that the Gospel just proclaimed begins.

The events we commemorate in this vigil of the Great Feast of the Nativity of Our Lord are human and homely.  We can identify with them.  Mary and Joseph struggled in the same way we do.  They were as stressed as we are.  They were cold, hungry, hot, wet, and sweaty just like us.  As we will hear in the coming days and weeks at Mass they experienced the same emotions we do ranging from fear and anxiety to sorrow and joy.  Mary and Joseph both responded to God with the obedience of faith.  Because of their obedience, because of Mary's fiat and Joseph's silent assent, we celebrate that Jesus, fully Divine and fully human; we celebrate that Jesus, truly God and truly man, was born in a stable in Bethlehem where he was wrapped in swaddling clothes and placed in the manger.

Christmas is not an end in itself.  It cannot stand on its own.  Christmas can be understood ONLY in the context of the Christ Event.  Without His preaching, healing, passion, death, resurrection and ascension to the Father, Jesus, son of Mary and Joseph, of the house of David, would have been just another kid born in the Ancient Near East around 2000 years ago.  But this child was different because he was--and is--both True God and True Man.

Jesus’ life on this earth began in Bethlehem and ended on Calvary in Jerusalem.  A life that began surrounded by the wood of the manger ended hanging on the wood of the cross.  The Christ Event, from birth through death and resurrection, is the only reason we celebrate today.

In March the joy of Christmas will give way to the penitence of Lent, the remembrance of the first Eucharist, the horror of Good Friday, and finally the glory of Easter.  For now the purple vestments of Advent have been replaced by white.  We sing Silent Night, Hark the Herald Angels, and Joy to the World, and the invitation to come and adore Him of Oh Come All Ye Faithful. It is a time of great joy.

Some of the greatest theological statements in history, were written not by academic theologians but by men and women who didn’t just talk the talk from their ivory towers.  They walked the walk.  They did the heavy lifting.  One of them was the late Dag Hammarskjold, third Secretary General of the U.N. who died in a mysterious plane crash while negotiating peace in the Congo.

Hammarskjold was a deeply religious man.  He captured the history of our salvation—the reason why we are celebrating today—in a haiku, a poetic form of only 17 syllables:

On Christmas Eve, Good Friday
Was foretold them
In a trumpet fanfare
Because, and only because, the Gloria in Excelsis Deo we sing today will lead to the Alleluia, He is Risen of Easter, today we can exult as we sing:

Venite adoremus.  Dominum.
_______________________________
The beginnings of the creche have been attributed to St. Francis of Assisi.  Creches are fascinating.  They range from tiny to larger than life.  Looking through my photo library I don't have too many examples.  There hasn't been time to do any photography in the chapel here at Campion this week.  Perhaps tomorrow when things are very quiet.  The creche just went up yesterday afternoon.  We had the funeral for Fr. Joe Fennell, SJ, who died at the age of 102, this morning and I had Mass at St. Julia in town at 5:30 PM.  There was no possibility of taking any kind of photo.  A nap yes but no photos.

The first is from the Chapel of the Holy Spirit here at Campion from last year. 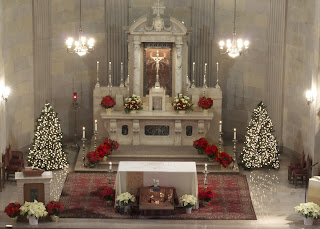 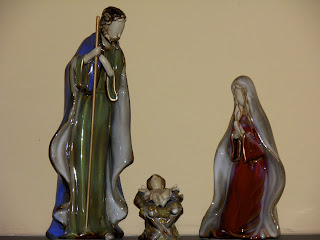 The next three are from Taiwan.  The first is Sacred Heart Church in Taipei where Ignatius was pastor until last year when his term was up.  I like the arrangement very much.  The extraneous players, magi, donkeys, shepherds and angels were about 3 meters away on the right side when facing the altar.  Nothing to distract from the Holy Family. 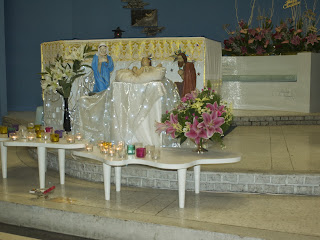 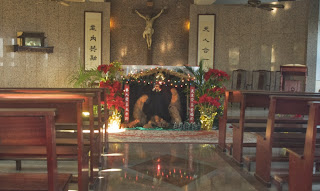 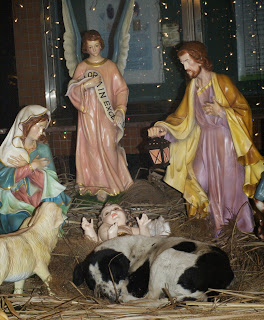 "O Wisdom, O holy Word of God, you govern all creation in your strong yet tender care.  Come and show your people the way to salvation." (Liturgy of the Hours)

Today at vespers marked the recitation, or chanting, of the first subtle but deeply satisfying sign that The Feast of the Nativity of Our Lord is near.  The Magnificat antiphon was the first of the "O Antiphons."
The seven "O Antiphons" introduce the Magnificat from 17 December to 23 December.  An ancient custom in the Roman Church whose history is lost in time, they were in use by the 8th Century though they may have existed somewhat earlier.  The Catholic Encyclopedia describes them as "a mosaic of biblical verses from prophetic and wisdom books."  Each antiphon begins with "O", hence the name.  In Latin they are titled, "O Sapientia" (Wisdom), "O AdonaiI" (Lord), "O Radix Jesse" (Root of Jesse), "O Clavis David" (Key of David), "O Oriens" (Radiant Dawn), "O Rex Gentium" (King of All Nations, and "O Emmanuel" (Literally God-with-us) [Catholic Encyclopedia].  I included the Latin because if one writes the antiphons one per line and then takes the first letter of each one and reads up from Emmanuel to Saptientia one reads a Latin acrostic ERO CRAS that translates as "Tomorrow, I will come."
The Gospel for today's Mass is the very beginning of Matthew, chapter 1 verses 1 to 17, "The Genealogy of Jesus Christ, the Son of David."  Sometimes called, "the begats" it is one of the most notoriously tongue-twisting of all the Gospel readings (it is a real treat for Jesuits for whom English is a second, third, or later language).  A priest in his first year should not approach this reading cold.  Practice.  Practice.  Practice.  Many people do eyeball roll when they hear this Gospel reading begin: Great!  A list of names.  So what?  No parable.  No sayings.  No nothing except for a long list of names."  Consider also that David is familiar but Amminadab is not.
The answer to the reason for this Gospel is made apparent in the letter by St. Leo the Great, pope in the second reading in the Office of Readings for 17 December.  It is worth quoting at some length.  "Matthew's genealogy begins by setting out the genealogy of Jesus Christ, son of David, son of Abraham, and then traces his human descent by bringing his ancestral line down to his mother's husband, Joseph.  On the other hand, Luke traces his parentage backward step by step to the actual father of mankind to show that both the first and the last Adam share the same nature."  A bit later in the same letter one reads, ". . . unless the new man, by being made in the likeness of sinful humanity, had taken on himself the nature of our first parents, unless he had stooped to be one in substance, and, being alone free from sin, united our nature to his, the whole human race would still be held captive under the dominion of Satan."
The two genealogies have only a handful of names in common.  Not exactly the sort of thing Mormon genealogists would approve of, but they say the same thing in different voice:  Jesus is fully God and fully Man.  That he took on the cloak of human nature is the greatest love story that has ever been or ever will be told.
"O Wisdom, O holy Word of God . . . Come and show your people the way to salvation."
__________________________________________
Only one photo.  It is worth some meditation time.  It is a detail of the large Salve window at St. Joseph Abbey in Spencer, MA.  I took it in the final days of the splendid vow retreat I made there at the end of September.  The Salve Regina is the final prayer of the Church's day.  At Spencer the men face the window at the end of compline.  All of the lights are turned off.  The window is lit from behind.  They chant the Salve and then approach the abbot for his blessing before going to their cells.  The great silence begins with the Salve.   Here at Campion we have the custom at funerals of bringing the man's coffin into the center of the rotunda.  When all have gathered around we chant the Salve Regina in Latin.  It is always deeply moving, as it will be on Thursday morning at the conclusion of the funeral of Fr. Al Agresti, SJ.