Feast of the Conversion of St. Paul

The dramatic description of Paul’s conversion experience has kept neuropsychchiatrists engaged in discussion about the nature of the experience for a long time .  Was it an occipital lobe migraine that caused the flash of light—a visual hallucination—followed by three days of blindness?  It is possible.  Was it an epileptic seizure?  Also possible.  The voice is more of a problem.  Because the others heard it, though they did not see the flash of light, one could not call it an auditory hallucination.  Auditory hallucinations are not group events.  On the other hand, is it possible that they heard Paul’s voice repeat what he was hearing while in something of a trance state?  It is a bit of a stretch but one could not completely rule it out.  When this narrative is cited in the medical literature the focus is exclusively on Paul.  Ananais’ experience is never mentioned.   Nor is the way in which Paul regained his sight.

Of course the neuropsychiatric literature never mentions the startling change in Paul’s attitude and behavior.  It is this last, the effect of the spectacular details, that is the important part of the narrative.  In response to the action of grace Paul abandoned his ultra-militant opposition to the followers of the Way in order to embrace it himself.  The pursuer had joined the pursued.

Obviously others were startled, cynical and initially mistrustful.  Given Paul’s history the wariness of others was not only justified it was prudent.  Too many of us get into trouble by trusting charming antisocial characters and charlatans as well as outright liars.  Loving one’s neighbor should not be synonymous with stupidity.  How did others see Paul in the early flush of his conversion?  Was he a wolf in sheep’s clothing or was this a bona fide conversion?  We know the answer but Paul’s contemporaries were correct in the caution.

There was a triple effect of his conversion.  First, Paul saw God in a new way, in a new light.  Similarly he saw others in a different way.  And finally and most critically, he saw himself in a new light.  Paul now saw himself in the light magnificently described by Augustine in his Confessions when he wrote, “This light was above me because it had made me; I was below it because I was created by it.  He who has come to know the truth knows this light.” It was a blinding light that obscured his vision for three days. But, isn’t that the effect of receiving one’s vocation? Paul received his vocation as missionary to the Gentiles in the fascinating and dramatic experience detailed here.

It is unlikely that any of us received his vocation to the Society in such dramatic fashion.  However, if we ignore the drama in this reading we see that our call to the Society was not much different from Paul’s call to the Way:  Commit to following Jesus and do so for life, despite the tribulations resulting from that commitment.  As we commemorate the Conversion of St. Paul we are called to recall our own conversion, to reaffirm it, and to give thank for that call to follow

All of this of course made me recall two years ago this very moment when the tertian class in Australia went to Gerroa Beach in southern New South Wales so as to get to know each other.  Staring at the photos takes some of the chill off but not all of it.

We arrived at Gerroa on a glorious Saturday afternoon.  Sunday dawned clear, sunny and warm (every single day was like that, sun, heat, no humidity and no rain).  Quite a sight compared with what I'd left behind. 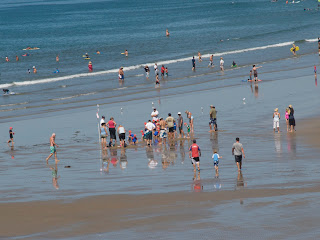 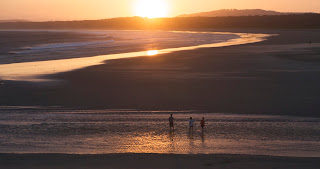 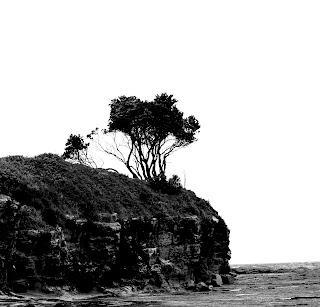 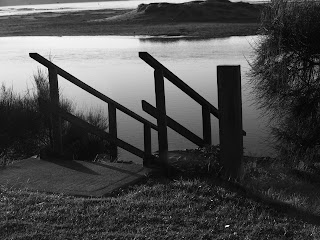 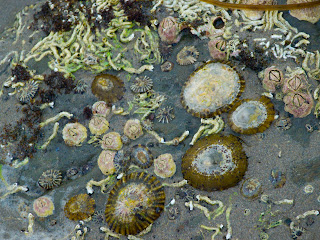 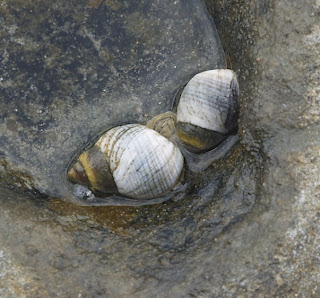 The Epiphany of the Lord

One of the challenges to getting through the Christmas season is the amount of sickly sweet treacley imagery that clings to the narrative of Jesus' birth.  From cards with images of a baby who appears to be the size of a six-month old to Mary dressed in blue and white silk encrusted with pearls, or at least rhinestones, despite the arduous journey and physical circumstances in which she gave birth, to the Santa and elf cards that are beneath contempt, the images are oftentimes painful to behold.  Much too often we hear of the "Magic of Christmas."  Or we hear "Christmas is for Children."  And so it goes.  Christmas is not a holy day exclusively for children.  Christmas is not magic.  It is not a magic and light show.  It is not a panacea for sorrow.  Too often the bereaved, the dying, and those who are struggling are told how they must surrender to the magic of Christmas so that they'll feel better.  Friends and neighbors insist that a large dinner at someone's home will make all their cares go away, or, at the very least, help begin the chimerical so-called "closure" to their pain.   Alas, Epiphany is not exempt from the gooiness.

Epiphany derives from the Greek:  epi:  forth and pheinein: to show.  Thus Epiphany:  to show forth.  Among the standard dictionary definitions of epiphany one finds, "a sudden manifestation of the essence or meaning of something, a comprehension or perception of reality by means of a sudden intuitive realization."   That is a good description of this feast as described by Matthew, the intuitive realization of Jesus as Messiah; an intuition symbolized by the star.   Now we come to the kings.

A few years ago on this feast I witnessed a hideous addition to the Mass in a highly progressive parish.  At the offertory three congregants dressed in maroon and gold robes that appeared to have come from a high school graduation closet, processed up the aisle along with the bread and wine, to the strains of "We Three Kings of Orient Are."  The robed individuals each carried a large box lifted high into the air as they goose-stepped up the aisle, one step per two beats.  I never realized how many verses that song had.  Or how long the aisle was.

The word "kings" does not appear in Matthew's Gospel.  Rather those who bore the gifts are described as magi.  Some translations use wise men.  But kings they weren't.  The term kings came into use only around the sixth century.  Also note that Matthew does not give a number; he simply used the plural.  There could have been as few as two or many more than three.   Only tradition holds, because the gifts were described as gold, frankincense, and myrrh, that there were three magi.  Ultimately however, their kingly or non-kingly status and number is irrelevant and a distraction.

The importance of the magi in Matthew's Gospel is that they represent the first Gentiles to worship Jesus.  They were the first Gentiles to recognize Jesus.  The magi were the first Gentiles to have the epiphany, the sudden realization of the reality that Jesus was the one for whom the world, not only Israel, but the world, had waited for so long.  Their epiphany was not exclusive.  Later on, this time in Luke's Gospel, we hear how Simeon and Anna had the epiphany of Jesus when he was presented in the Temple.  There are many more epiphanies throughout the Gospels.  There are many epiphanies scattered throughout our lives, if we are willing to notice them.

The meaning of Christmas is apparent in the Gospel.  But that meaning is not in the magi and the gifts.  Christmas is put into its proper context in the sentence,

"When King Herod heard of this
he was greatly troubled
and all Jerusalem with him."

Herod's anxiety and the duplicity underlying his conversation with the magi gets closer to the reality of Christmas than do the lyrics of  "O Little Town of Bethlehem."   In Herod's evil desires we see the first shadow of the cross.

"Go and search diligently for the child.
When you have found him,
bring me word, that I too my go
and do him homage."

This, from a crazed and cruel megalomaniac.

The reading from Isaiah assured Jerusalem that the glory of the Lord would shine upon her.  We hear echoes of the covenant, of God's promise to His people.  In the context of the prophecy from Isaiah, the reading from Ephesians is consoling because it assures the Gentiles that they too were, and are, included in the promise.  Thus, the importance of the magi.  They are important as Gentiles who recognized that Jesus came for them, as limned in the formula of consecration of the wine:

"This is the chalice of my Blood,
the Blood of the new and eternal covenant
which will be poured out for you
and for many . . ."

Once we wash away the treacle, once the sloppy sentimentality is set aside, once the word magic is forever disassociated from Christmas, we can begin to apprehend the true meaning of Christmas.  We can begin to understand the "Christmas story," a story that did not end when the magi returned home, wherever that might have been.

One man who was able to see the narrative of Jesus' birth with realistic and unclouded vision was not a professional theologian.  Rather he was an economist and diplomat.  His name is familiar to anyone over the age of sixty. Dag Hammarskjold. Hammarskjold was the second secretary general of the U.N. from 1953 until his mysterious death in a 1961 plane crash in what was then Northern Rhodesia.  He has only one book published under his name.  That would have never gotten him tenure in most universities.

What was published in English as Markings, was a small, irregularly kept journal found in his apartment after his death.  He began it at age 20.  He died at age 58.  Entries are not dated.  A number of the later entries are written as haiku, a Japanese form of poetry limited to seventeen syllables.  One of those haiku captures, in seventeen scant syllables, the entire meaning of Christmas.  It captures the true epiphany of Jesus, the true apprehension of Jesus, the most basic understanding of what is called "The Christ Event."  It reads:

"On Christmas Eve Good Friday
was foretold them
in a trumpet fanfare."

Neither event was magical.
I took the pic of the fountain in front of the Pierce Pavilion from my room window.  That explains the subtle crosshatched pattern of screen. 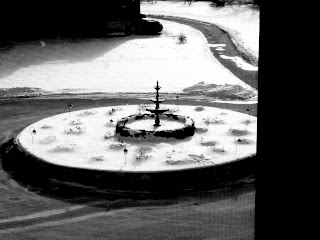 The other pic from Campion is the holly in front of the mansion. 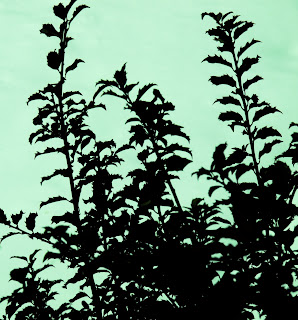 And now it is time to cross multiple time zones.  The first photo is one of several I took while leaving dinner with the Jesuit Community at Fu Jen Catholic University just outside Taipei.  It was one of those moments that reminded me why one should have a camera at all times.  The dog never moved, opened its eyes or even sighed as I took a series of photos (with and without flash).  One of my favorites.

The next two photos are from Wen Tien Taiwanese Buddhist Temple in New South Wales, Australia.  The tertians stopped there on the way to Gerroa for the initial days of the tertianship.  The photos of the frieze made me long for a lens that went to 200 mm rather than 150 (John The had one; talk about lens envy).  The other is of a nun striking a gong with what looks like part of a telephone pole. It made an unmistakeable sound. 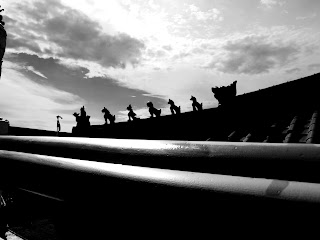 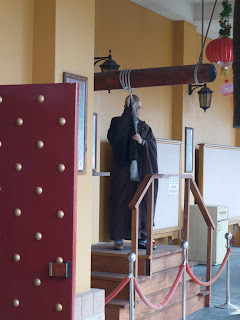 And finally.  It is summer in Australia.  The Aussies are suffering through quite a heat wave in parts of the country.  Some areas of South Australia north of Port Lincoln (protected in part by its location on the water) are experiencing temps above 115.  That is not a typo.  The small wind chimes hung in the yard behind the tertian house in Pymble.  Stay warm. 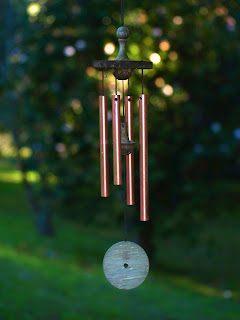