The reading from James is not the only time we will be cautioned against counting on tomorrow, or the day after, or the day after that.  Or making great plans.  No one can count on tomorrow.  Tomorrow can be changed in the blink of an eye.  We.  Our loved ones.  Our friends.  Our co-workers.  Our neighbors.  We are all puffs of smoke.  When we are gone the memory of us evaporates in the same way that the smoke from candles on a birthday cake dissipates.

". . . in no way can a man redeem himself,
or pay his own ransom to God;
Too high is the price
he would never have enough to remain alive always
and not see destruction."

It reminds us of our fundamental human equality.

"For . . . wise men die,
and likewise the senseless and the stupid pass away,
leaving their wealth to others."

The first reading from the breviary yesterday morning was the lyrics of a song composed in the 1950's.  It became a major hit for the American folk-rock group The Byrds in 1965.  It is no joke to say that this particular rock song has the oldest lyrics ever for a top 40 hit.  That is our course Pete Seeger's song to which he added only one word repeated three times:  "Turn, Turn, Turn."

This was one of the great songs of the mid-60's.  Who woulda' thought?   I will confess to having more or less sung the first reading from Ecclesiastes in my head.  For the rest of the day.  This was not an ear worm about which to complain.

The attached photos are candles, obviously, taken in any number of locations.  I prefer black and white photography to color.  Certainly if I had to choose to shoot exclusively in one or the other it would be black and white.  My first roll of film back in 1977 was ASA 400 black and white.  One company makes a camera that shoots only in black and white.  The price would leave my credit card black and blue.

The votive candles at the Basilique Notre Dame de Fourviere in Lyon.  These were in the crypt chapel, a space I very much preferred to the overly done and gaudy upper church.   In some of the candle stands the candles higher up were seriously bent due to the heat from the lower candles melting them. 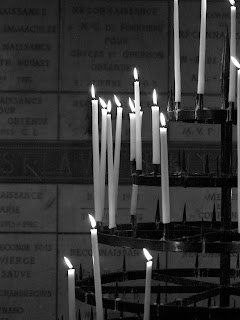 These are the votive candles at Old St. Joseph Church on Willings Alley in Philadelphia.  Definitely worth a visit when in Philly.  Not easy to find as it is tucked away due to anti-Catholic sentiments during the 17th centuries.  Founded and built by the Society of Jesus. 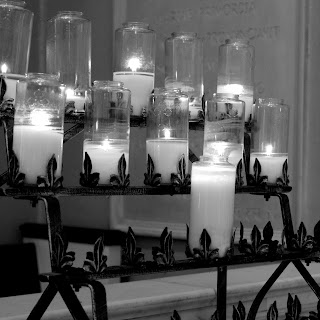 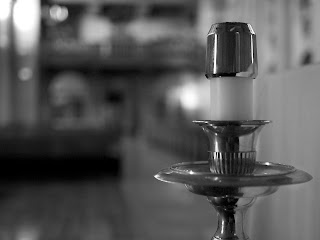 The altar candles in the chapel at Loyola-Marymount University in Los Angeles.  Took these when I went out for Ryan's vows last August. 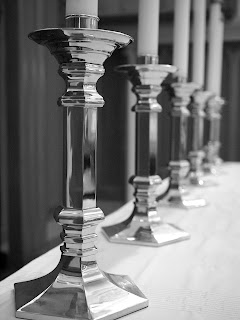 Finally, two candles and a bowl on the table in the men's guest house at the Abbey of Regina Laudis. 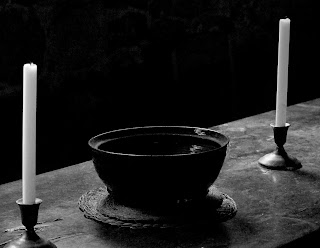 Today’s feast is proof that it is impossible to understand the New Testament without knowing the Old.

“When the time for Pentecost was fulfilled, they were all in one place together.”

The reading from Acts is dramatic.  It is a movie script demanding George Lucas-like special effects:  Wind.  Flame.  Polyglot speaking.  Consider the people’s consternation that these unsophisticated and uneducated Galileans were able to speak in whatever language was necessary for everyone to hear the Good News.  With the speaking in tongues we find what some call “the reversal of Babel;” that which had been split apart by man's arrogance at the Tower of Babel, was made whole again by the Holy Spirit.

It is a pity we did not hear all of Psalm 104 during the responsorial.  Psalm 104 uses exquisite imagery to describe God’s ongoing act of creation.  Ideally God’s action and our response to His action are reciprocal, God's gift flowing from Creator to creature and our thanksgiving and praise from creature to Creator.

Today we celebrate the gifts of the Holy Spirit; gifts that strengthen our faith; gifts that strengthen our lives.  Each of us has been given unique gifts.  But, we have not been given identical gifts.  Our task is to discover the gifts unique to each of us and develop them.   “As a body is one though it has many parts . . .”  This is an important statement  to which Paul will return later.

Certain sectors of society no longer acknowledge or accept differences or distinctions.  Indeed, there are concerted attempts to erase them.  There is a bizarre insistence on a kind of false or artificial equality.  It is an extreme version of particularity that is marked by a grandiose narcissistic sense of specialness.  Each individual or faction demands that his or her specialness is most special and thus deserves precedence.  Any discussion generally ends with someone shrieking the equivalent of  "my equality is more equal than your equality."  And then the whiner can go on a talk show to rant, demand an apology and insist on public penance by the accused miscreant.

Medical students hear amusing jokes, some of which can never be shared in sacred space, about the struggle for supremacy within the body.  The general outline is an argument in which each of the body's organs or organ systems is debating which one is the most important, which is MOST critical to the life and comfort of the individual.  However,  except for the appendix, a useless anatomic appendage, the body has no most important system. There is no supreme organ or organ system.  No capo di tutti capi.  There is no pope of the body.  Each of the body's systems is equally necessary to our ability to function and survive.  The lungs cannot do the work of the liver.  The liver cannot do the work of the heart.  The pancreas cannot do the work of the kidneys.  And nothing can cover and protect the body except the skin. If any one vital organ or system is seriously damaged, including the skin, the entire body is at risk of death.  It is that simple.

None of us is the social equivalent of a stem cell, a totipotential cell that can become anything at all. Insisting that one has a dream does not mean it must or will be fulfilled.  "You can be whatever you want to be" is one of the greatest lies we are fed. That lie is being taken to an absurd and sinful extreme in the U.S.  We all have assets. We all have liabilities.  We all have weaknesses.  We all have strengths.  We are all fallible in some areas and more than competent in others.  The only thing we have is common is that we are sinners.  No exceptions and no counterbalance.  That we are all sinners loved by God is the only true equality.  We rejoice that the Holy Spirit has bestowed his gifts upon us.

The Easter Season has ended.  Beginning tonight we will be in ordinary time for about the next six months.  Green vestments.  Sunday Gospel from Luke.  And then we begin to celebrate the events in our redemption with Advent in early December.

Five years ago at this time I was in Warrnambool, Victoria, Australia.  Shortly after Easter, which was very late that year, we were sent all over Australia for three weeks to give retreats in daily life.  I was sent to Warrnambool.  Great place.  The town has about 30,000. It sits on the coast.  St. Joseph Church was on the edge of the Central Business District.  It took about 20 minutes to walk to the coast.  There was an extraordinary amount of rain while I was there.  I couldn't complain as the area had been enmeshed in a years long drought, a not uncommon situation in Australia.  Because the retreat schedule was made to fit around the retreatants' daily lives, there were few periods of time when I could get out with the camera except for Wednesday, assuming it wasn't pouring.

These rental boats were tied up for the impending winter.  Recall that the seasons are reversed from the northern hemisphere.  The weather was cool and crisp. 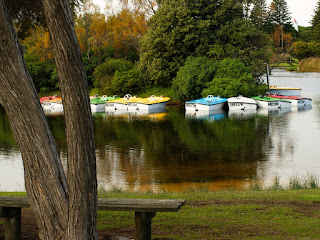 I'd call this photo "Sittin' on the Dock of the Bay" to honor the Otis Redding classic. 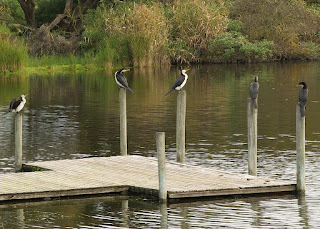 These lost and broken sunglasses were a poignant reminder of the end of summer.  This is one of the few photos that I converted to black and white and then converted back as the effect is better in the monochrome brown. 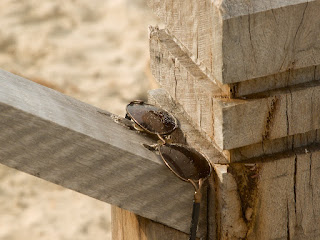 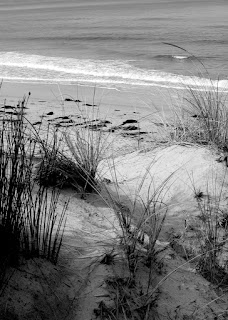 In the trend of pop music the beach boy is searching for his surfer girl.  He wasn't going to find her there that day.  We were the only two on the beach. 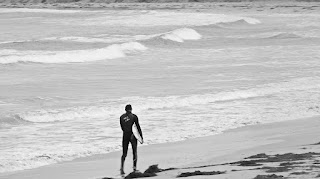 The last two are not identical.  They were taken from the same basic vantage point.  The colored one reminds me of the work of Winslow Homer.  The sun was going down rapidly, as was the temperature, and I had a long way to walk back to the church.  It was worth it, however. 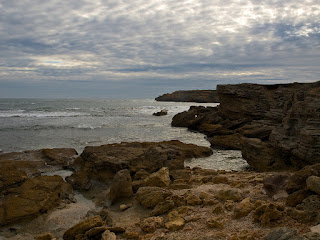 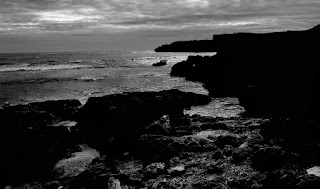