Up On the Roof

Some of the most exquisite imagery in scripture describes the attributes of Wisdom.  It should be so. Wisdom is one of the key elements of civilization. Wisdom is fundamental to being human.  Indeed, the capacity for Wisdom, more than anything else, separates us from all lower animals, no matter how cute, cuddly, majestic, or clever they might be.

Somewhere in the bowels of MIT and other engineering schools worker bees are slaving away at what they call AI--artificial intelligence.  Note:  no one is working on artificial Wisdom.  A computer can be programmed to check the spelling in, and even translate, the lyrical passage just proclaimed.  It cannot be programmed to create something as splendid.  Or to act on its meaning.

The Book of Wisdom, as well as the rest of the Wisdom literature such as Proverbs and Sirach, gives us advice about how to live and how to love God.
Wisdom, as described in scripture is not inert. It is not an historical curiosity that explained the world to the benighted, non-scientific and non-psychologically minded people of the Ancient Near East.  It was not, and cannot be, replaced by the so-called enlightenment.  Wisdom is associated with all that God does in the world.  It should undergird all that we do in the world.

Whether speaking of the Ancient Near East or the early years of the 21st century in the U.S. one must ask what Jesus meant by the startling and uncomfortable image associated with the camel passing through the needle's eye.  Does wealth automatically condemn? Are all the wealthy excluded from the Kingdom of God?

Jesus is not warning specifically against wealth.  He is warning against human behavior that hasn't changed in two millennia, that is the drive for more and more wealth.  The wealthier one is the more time and energy is spent in maintaining and increasing that wealth, oftentimes to the detriment of caring for, or caring about, others. Too often the more one has the less one shares.  We've become jaded to news detailing the latest financial scandals, the ones involving obscenely paid business executives who, it appears, want even more.

We tolerate, and even rationalize, the greed of disgustingly overpaid athletes whose whiny behavior and associated demands for astronomical salaries have pushed the cost of taking a family to a game beyond the ability of many.  (Based on their performance the Red Sox were certainly overpaid this year.  How about a refund?)  But there are also lower level atrocities that seek wealth; the kind, which even those who consider themselves poor, or middle class, might commit.  Consider the Little League treasurer or the secretary for the PTA who skims thousands or tens of thousands from the organization to support a "lifestyle."  When I first moved to D.C. the front page of the Post detailed the greed of a former president of the teacher's union and her minions. They used tens of thousands of dollars in dues for the usual: fur coats, vacations, jewelry and so on.

Unlike membership in a country club, unlike a place on Forbes Magazine list of the 1000 wealthiest people in the country, salvation is not the result of human achievement. One is not automatically saved because of rank, bank balance, or the number of toys one has upon death.  Wealth is not one of the keys to the kingdom. It need not be an impediment.  But it will never move anyone to the front of the line.

True wealth is not what one possesses
but what one gives.

True wealth is not what one hoards
but what one shares. 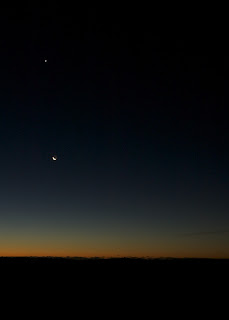 The moon and (I think) Venus greeted me.  A few clouds would have made things more interesting.  None of the photos would have been possible without the tripod and cable release.  It was so cold that I was shivering and numb of finger most of the time up there.   This was looking east. 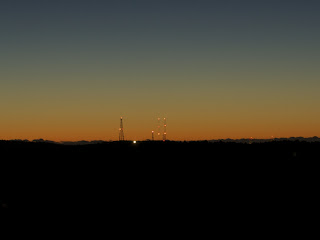 This was the view in the east a little later.  Sunrise was 6:55. 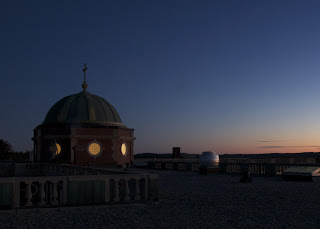 This is looking northeast.  I think. 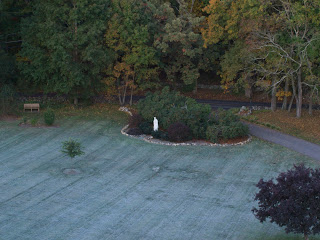 The frost was heavy on the grass. 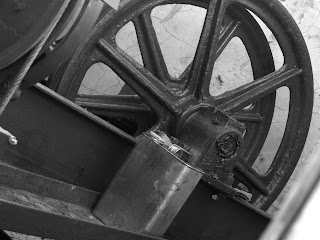 The source of much suffering at Campion.  The innards of the 90 year-old elevator.  We have a very close relationship with the elevator repair guys. 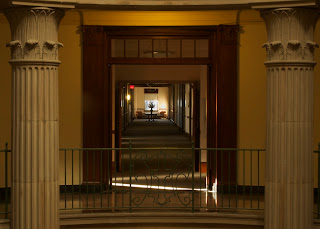 On the way down I took this photo down the hall of the retreat wing. 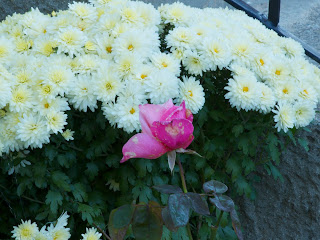 The frost did a real job on the rose that looked rather healthy a day or two ago.  The mums didn't seem to mind.
+Fr. Jack, SJ, MD
Posted by Fr Jack SJ MD at 9:14 PM No comments:

Certain readings present particular challenges to a priest.  The readings for this 27th Sunday in Ordinary Time are an example.  Father has several options.

The  Gospel is a perfect illustration of the first thing one hears on day one in Scripture 101:  “One cannot understand or appreciate the New Testament without knowing the Old.”   That explains why Old Testament is offered in the fall semester and New Testament in the winter.

In today’s Gospel Jesus directly quotes the creation story from the second chapter of Genesis, today's first reading.   This is only one of many times He cites Torah as the basis for his teaching.  Where do we go from here?

The commentary on today's gospel by Jesuit Fathers Donahue and Harrington begins:  “In the context of the journey narrative Mark presents Jesus’ radical teachings on marriage and divorce.”  Radical is the key word.  This teaching on divorce is as radical, challenging, and difficult today as it was when Jesus defeated the Pharisees' cynical challenge.  The reasons for Jesus' teaching being seen as radical have changed but the radical nature persists.  This radical nature is the best evidence that these are, in fact, His words

In Ancient Near East society marriages were arranged for financial and social reasons.  After the couple was engaged they got to know each other under supervision before the woman moved into the man’s—or his father’s—home.  This is plainly laid out in the first chapter of Matthew that describes Joseph’s plan to divorce Mary quietly.  The marriage ceremony itself involved signing legal documents.

In their attempt to trap Jesus into giving deviant teaching on marriage and divorce, the Pharisees alluded to two texts in Deuteronomy regarding divorce. Jesus, on his part, cited more ancient teaching from Genesis, part of which was proclaimed here, as expressing God’s original plan:  “and the two shall become one flesh.”   Then He elaborated and extended the teaching:  “Therefore, what God has joined together, no human must separate.”   Just fifteen days ago, I repeated this charge after the giving of consent at the nuptial Mass of a former student in Gladwyne, PA. It was a solemn moment.  In the Ancient Near East divorce was the exclusive prerogative of the husband.  The procedure was simple.  The husband gave his wife a certificate of divorce and sent her away.  She was now free to marry someone else.   Donahue and Harrington again, “In a society in which divorce was widely accepted and the controversial issue was the grounds for divorce Jesus’ teaching about no divorce went against custom and the cultural grain.”  Truly, the more things change the more the stay the same.

The early Church struggled with the question of divorce as mightily as we do today.  There is Paul’s advice to those who found themselves in “mixed marriages.” And the “exceptive clauses” found in Matthew which permit divorce
for porneia or, what is translated as, unchastity.  Now, if you want to have some fun with a bunch of scripture scholars, ask them over drinks exactly what porneia means.  Like the American Express ads, Priceless.  We continue to struggle  with the question of divorce today.  Commentators ask challenging questions about Jesus’ teaching:

“Is it an ideal to strive for, a challenge to be faced, an extreme example, or divine law?”

“Which part of the New Testament evidence is more important: Jesus’ absolute prohibition or the exceptions introduced by Paul and Matthew?”

“How is Jesus’ teaching best actualized?”

There are marriages that should and must end.  Many of those never should have been entered into in the first place.  One doesn’t have to be a psychiatrist to recognize that though it does help.  One of the saddest, and most infuriating, examples of misusing and abusing Church teaching on divorce comes from Spencer Tracy.

Spencer Tracy carried on a twenty-five year long adulterous affair with Katherine Hepburn.  The adultery continued until his death.  His death also ended his 44 year-long marriage to his Episcopalian wife.  As several sources confirm he wouldn’t divorce her because of his QUOTE staunch Catholicism UNQUOTE.  Apparently adultery posed no problem to that staunch Catholicism.   A challenge today is those who see this, and other stories like it, as great romantic epics, when, in fact, they are merely tawdry affairs.

There were two options for this Gospel.  The short versions ends with the teaching on divorce. The longer form includes the passage about children.  It is appropriate to continue the reading because of the comment on the nature of power and the Kingdom of Heaven.

“Whoever does not accept the Kingdom of God like a child will not enter it.”

Children in the Ancient Near East had no social standing whatsoever.  They were possessions without influence or rights.  In contrast to 21st century America their whims did not rule family life.  Whenever Jesus uses a child as an illustration He is not presenting childhood in the modern romantic ideal as innocent, unspoiled, dewy-eyed—think Hummel figurine.  Rather, He is emphasizing that social standing, wealth, and power have nothing to do with the Kingdom of Heaven.

He who has the most toys when he dies has no advantage over the one who never had a toy during life.  If the relentless pursuit of those toys damaged or scandalized others, think Bernie Madoff or Spencer Tracy, the ultimate result is damning.

The responsorial psalm describes the ideal:

Blessed are you who fear the LORD,
who walk in his ways!
For you shall eat the fruit of your handiwork;
blessed shall you be, and favored .

May the Lord bless us all the days of our lives. 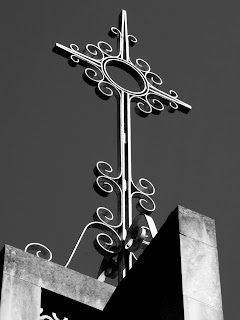 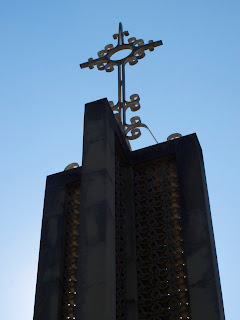 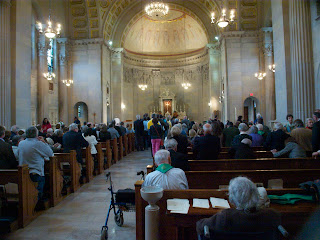 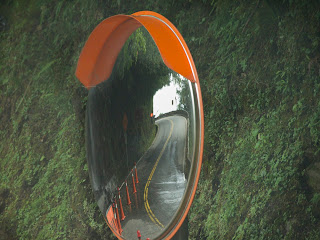 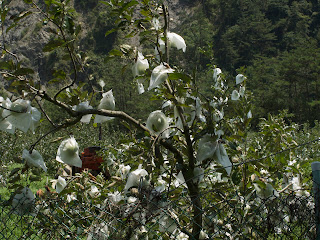 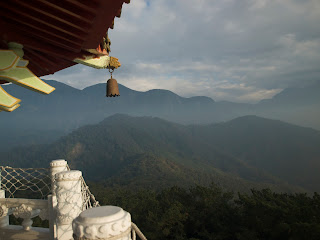