Commemoration of All Souls

Wisdom 3:1-9
1 Cor 15:51-57
Jn 11:17-27
"People don't want to let go. . . . They think it is supposed to last forever"
"But it happens anyway . . . . it doesn't matter what you do, you can't stop it."
"This living . . . . this life . . . . it doesn't last forever"
"It was never supposed to last forever."
These lines come from the poignant final scene of "The Shadow Box," Michael Cristofer's 1977 Pulitzer Prize winning play that was later made into a TV movie starring Valerie Harper, Christopher Plummer, and Joann Woodward among others. It reminds us of the limits of life. It recalls the shock when we realize that our lives are finite. It brings the stunning realization that our lives, and the lives of those we love, will end as they must, into sharp relief. The play explores the days as death approaches for three unique characters and their family members along with the strains on their relationships when it becomes obvious that death is going to happen, when the realization hits that "this living . . . . this life . . . it doesn't last forever." It captures the difficult moment when the realization hits, "It was never supposed to last forever."
Being with someone at the moment of death is to experience awe in the fullest sense of the word. The last blip on the cardiac monitor. The moment when all movement stops. The sigh as the final breath escapes the body. Suddenly it is over. A life. A relationship. An era. Everything has ended. Everything has changed.
" . . . in an instant, in the blink of an eye."
Using one short phrase Paul described how we all die. An instant. An eye-blink. A flicker. Though the illness that led to death may have been prolonged, though death may have been held off with medical technology, the transition from life to eternal life takes place in an instant, in a flash, in a flicker. In that moment when a loved one dies, we are thrown into the tasks of grieving, mourning, and being bereaved. We are forced to begin the task of adapting to an absence in our lives. We don't want to let go. We never want to let go. We think it is going to last forever. But it doesn't last forever. It never will. We rage against the knowledge that we have carried around forever, albeit mostly under the radar, that "It was never supposed to last forever."
While the Church commemorates All Soul's Day on the Second of November, there are multiple personal and private All Soul's Days for each of us. We observe our private All Soul's Day, perhaps more than one, not in November but in February, or May, or the searing heat of August. It is All Soul's Day as we see the painful anniversary approaching on the calendar or observe another holiday without one whom we love.
"The soul's of the just are in the hands of God
and no torment shall touch them."
The first verse of the reading from Wisdom is a source of consolation, though it may take months to feel that consolation. The souls of the just are in the hands of God. The souls of those whom we loved have something more than what occasional pathetic types refer to as a return to the food chain or a great nothingness. Those whom we mourn remain in the hands of God. We can never know the how or the what. We can never articulate the where or other details of the eternal life won for us through Jesus' sacrifice. We can never know eternal life until we ourselves have died. For now, we can only know through faith that those souls, the souls of those whom we loved and who loved us, are held now and for eternity in the hands of God. That knowledge does not in any way relieve us of the pains and tasks of grieving our loss, but it should at least dull the sharpest edges of grief.
Paul posed two questions in the reading from his First Letter to the Corinthians. The questions are perfect examples of sarcasm.
"Death where is thy victory?"
"O death, where is thy sting?"
Victory was snatched from the jaws of death through Jesus' passion, death, resurrection, and ascension. Hell's sting was defanged by Christ's sacrifice of His Body and Blood. We know this through faith. Martha made a profound statement of faith in the gospel just proclaimed. Imagine the scene. There they were the two sisters, friends, and other family, all gathered at the new tomb. All feeling the heaviness of grief upon their shoulders, the tears of sorrow on their cheeks. Confused.
"Lord, if you had been here . . . ."
"Your brother will rise."
"I know he will rise . . . on the last day."
And then we hear the most consoling words ever pronounced: "I am the Resurrection and the Life; he who believes in me, even if he dies, will live, and everyone who lives and believes in me will never die."
We can only Martha's response in response: "You are the Christ, the Son of God . . . . "
And then we pray:
Requiem aeternam dona eis, Domine,
et lux perpetua luceat eis.
Requiescant in pace.
Eternal rest grant unto them O Lord,
and let perpetual light shine upon them.
May their souls and the souls of the faithful departed
rest in peace.
Amen.
________________________________________________
The church at Preddvor shot from the cemetery itself. 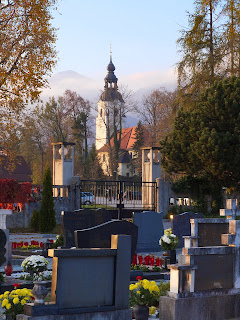 A portion of the cemetery that earlier had been filled with people standing in silence at the foot of their family plots.  It was late afternoon and the sun was already setting. 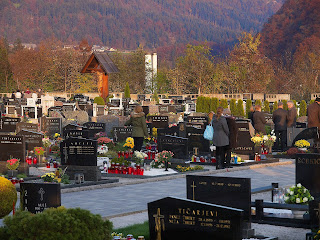 The crucifix in the center of the cemetery at which the three priests stopped.  We were joined by the choir. 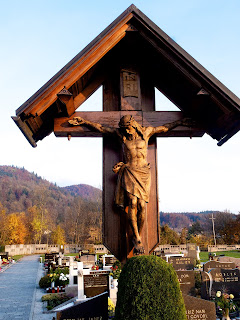 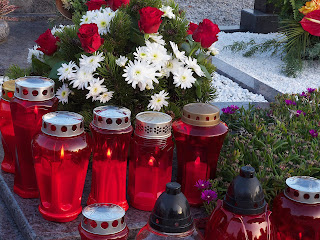 The last photos are from Žale, a huge cemetery in LJ.  The funeral chapel was surrounded by thousands of red votive lamps.  Many thousands were were placed on individual graves.  All of the Jesuits in LJ met at the SJ plot to say the rosary aloud.  I thanked the man who told me to take my camera--it wasn't part of my plan--for the next several days. 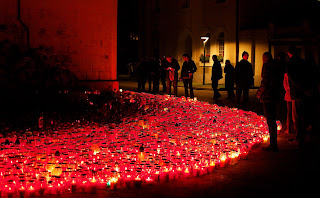 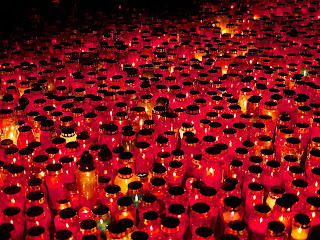 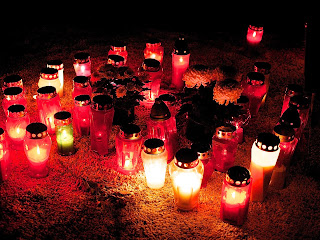 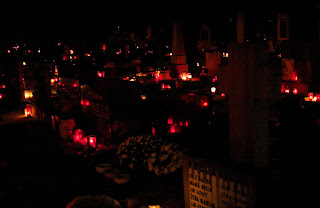