Three men are making the thirty-day Spiritual Exercises at the Campion Retreat Center.  Monday was their second break day.  During the retreat there is a break day around day 10 and another around day 20.  The break is not rigidly set at days 10 and 20.  In Australia one of the break days was changed in favor of better weather two days hence.  The men wanted to visit St. Joseph Abbey (Trappist) in Spencer.  The director could not take them and asked if I could.  With pleasure.  The two Carmelites were most interested in seeing the Trappist Preserves operation.  They make small batches of jams and jellies at their monastery in TX.

After lunch at a place with good pub grub near the monastery we perused the gift shop and spent some time in prayer in the church awaiting the 3:00 PM meeting at the guest house.  One of the men who is a friend of mine took us to Trappist Preserves at 3:00.  As I simply buy the stuff and have little interest in how it is made I wandered throughout with the camera.  Then as a treat we wound up in the Holy Rood Guild where the vestments are made.  Spencer-made vestments are instantly recognizable and exquisitely made. They are also made with impeccable taste.  In general there are no pictures of saints, no mottos or anything else.  Most especially they are nothing at all like the dreadful vestment that has faux-tapestry of the children of the world all over it  There are few vestments I refuse to wear but that is one of them.  By the time it was all over I'd taken over 200 photos.

The leaves were at peak color at the monastery.  Given the wind and rain that is falling at the moment I suspect they will all be down by the weekend.  However, one can't complain because we have had a splendid autumn.  Rather than posting a homily today I want to post photos and some explanation.  Lots of photos.

Details of a Celtic Cross in front of the gift shop at the entrance to the Abbey. 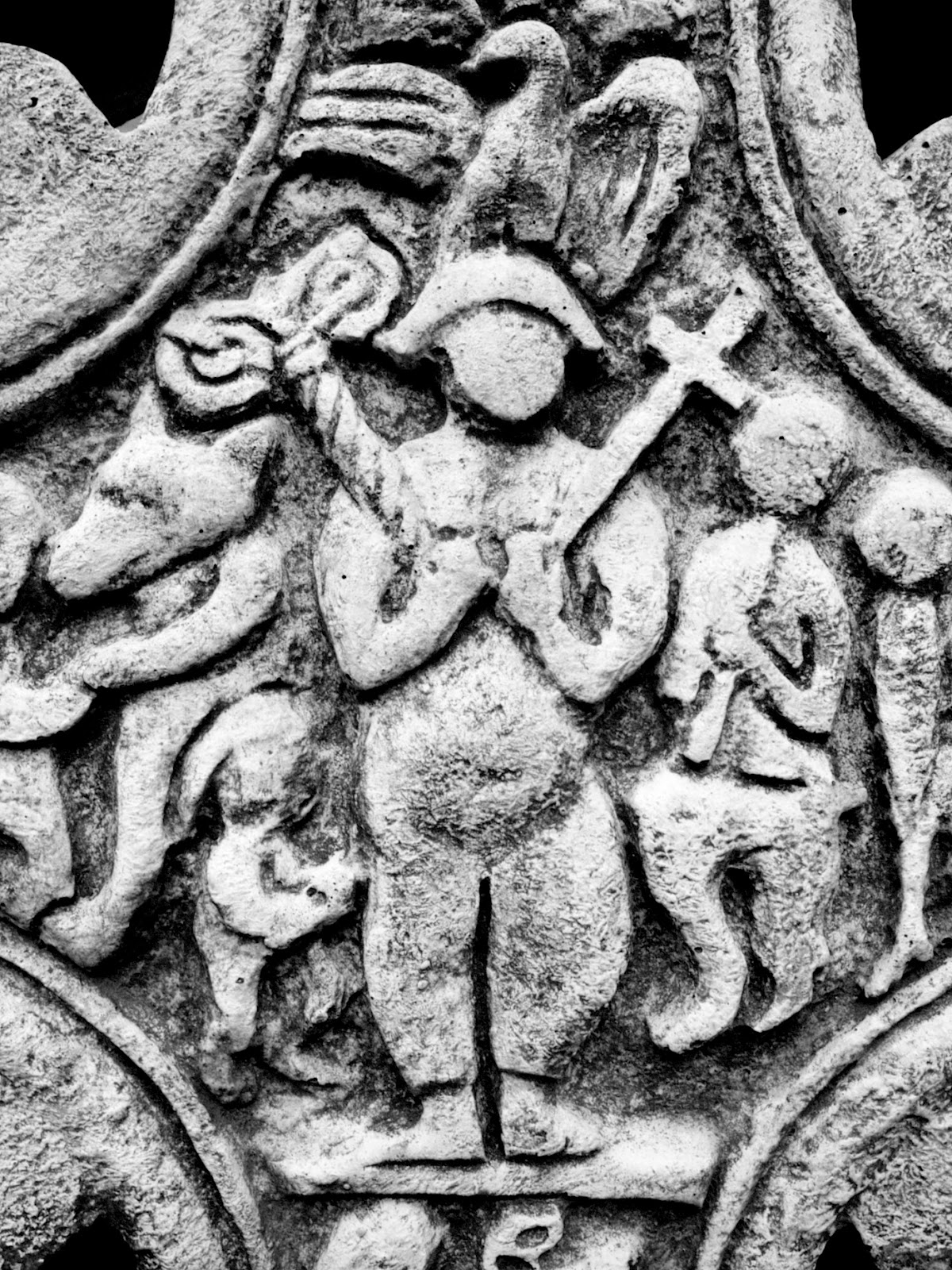 The  bell tower of the monastic church taken from a hallway. 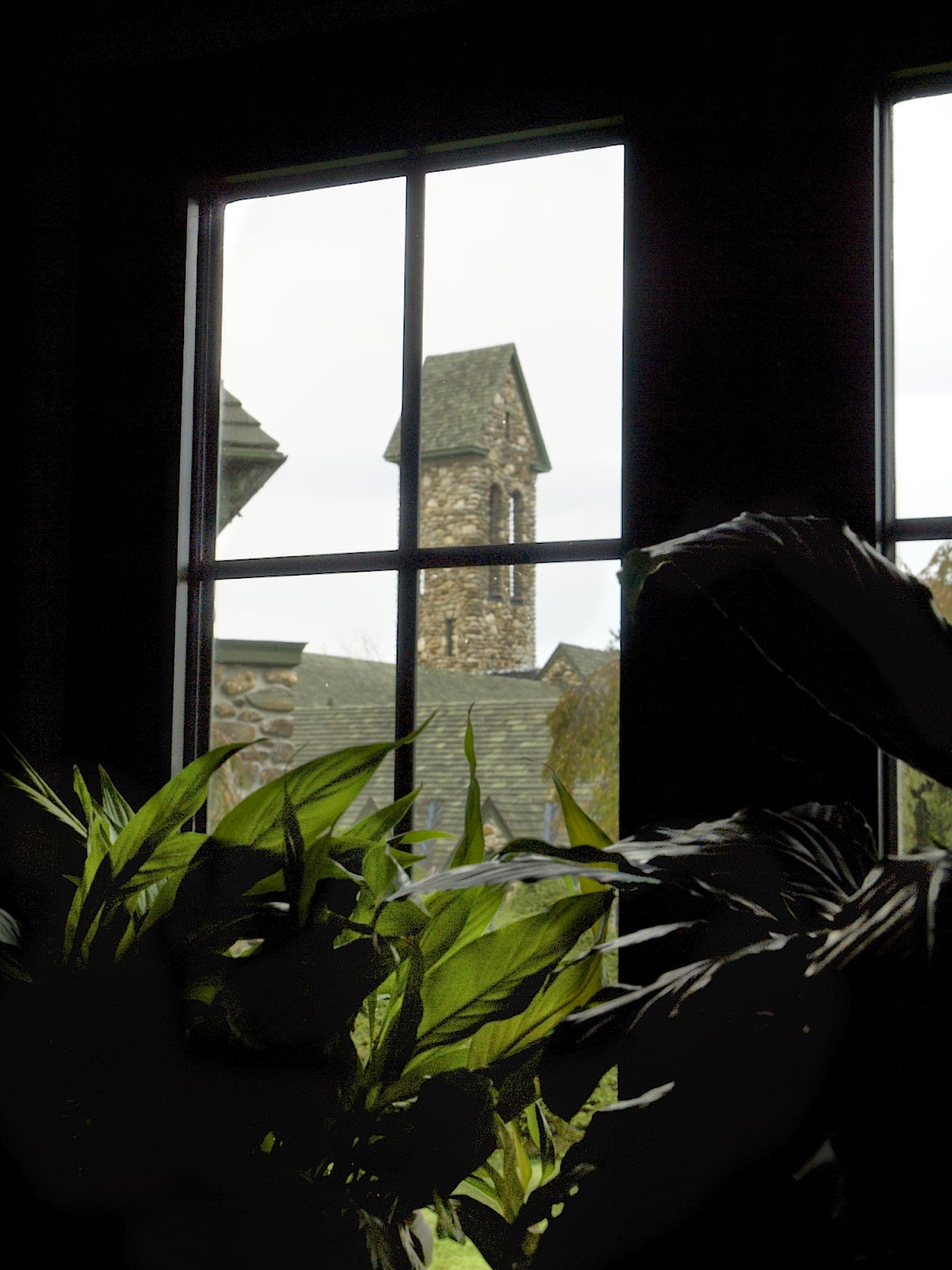 The second is "the cottage" where men who are testing their vocation to the abbey spend time until it is felt they are ready to stay in the monastery itself for an observership.  I made last year's vow retreat in the cottage, indeed in the room that is pictured.  It is the only self-contained room with its own entrance thus I didn't distract the other men who were there. 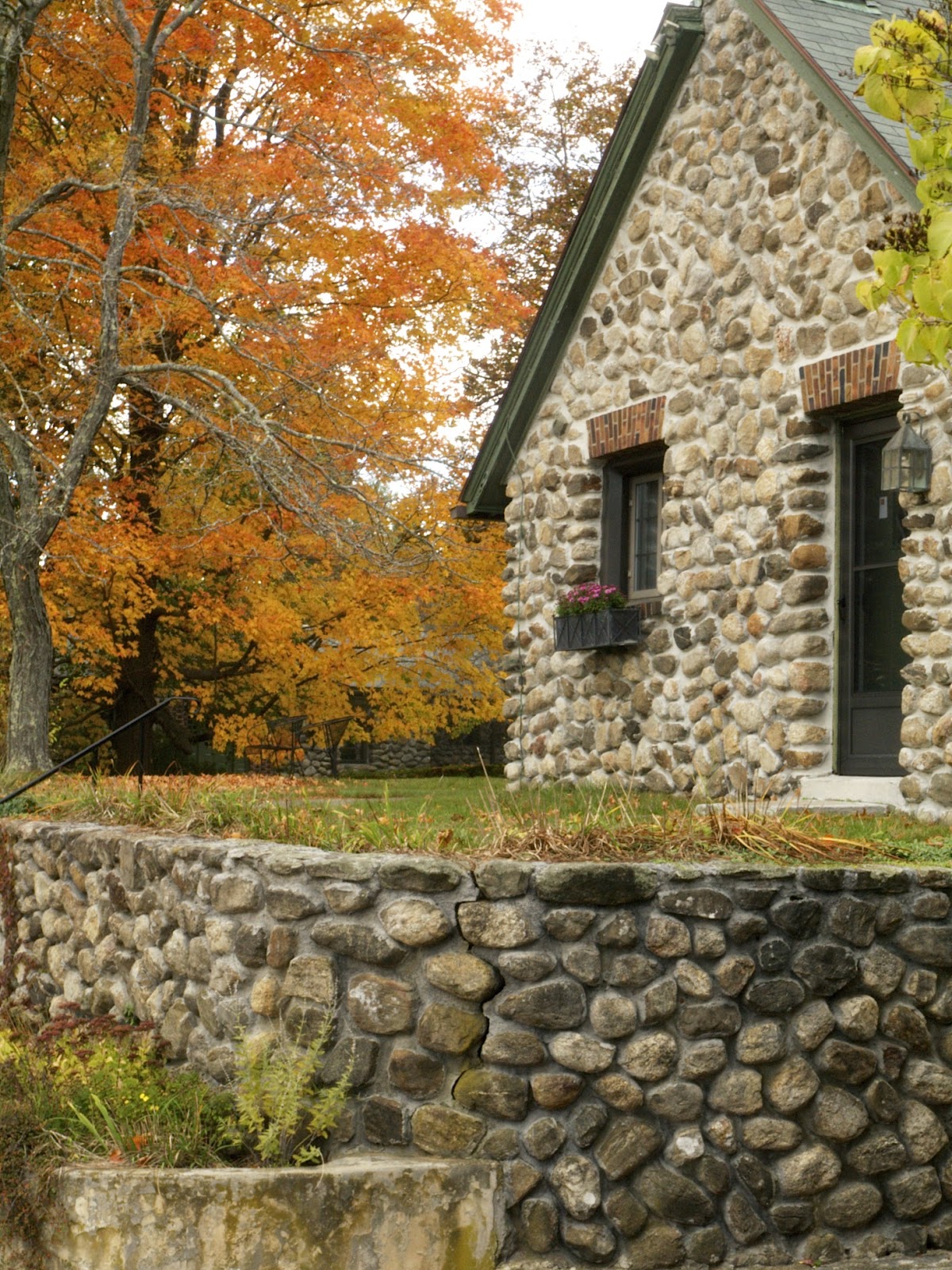 The foliage in front of the cottage was brilliant, as it was last year when I made my retreat at the end of September. 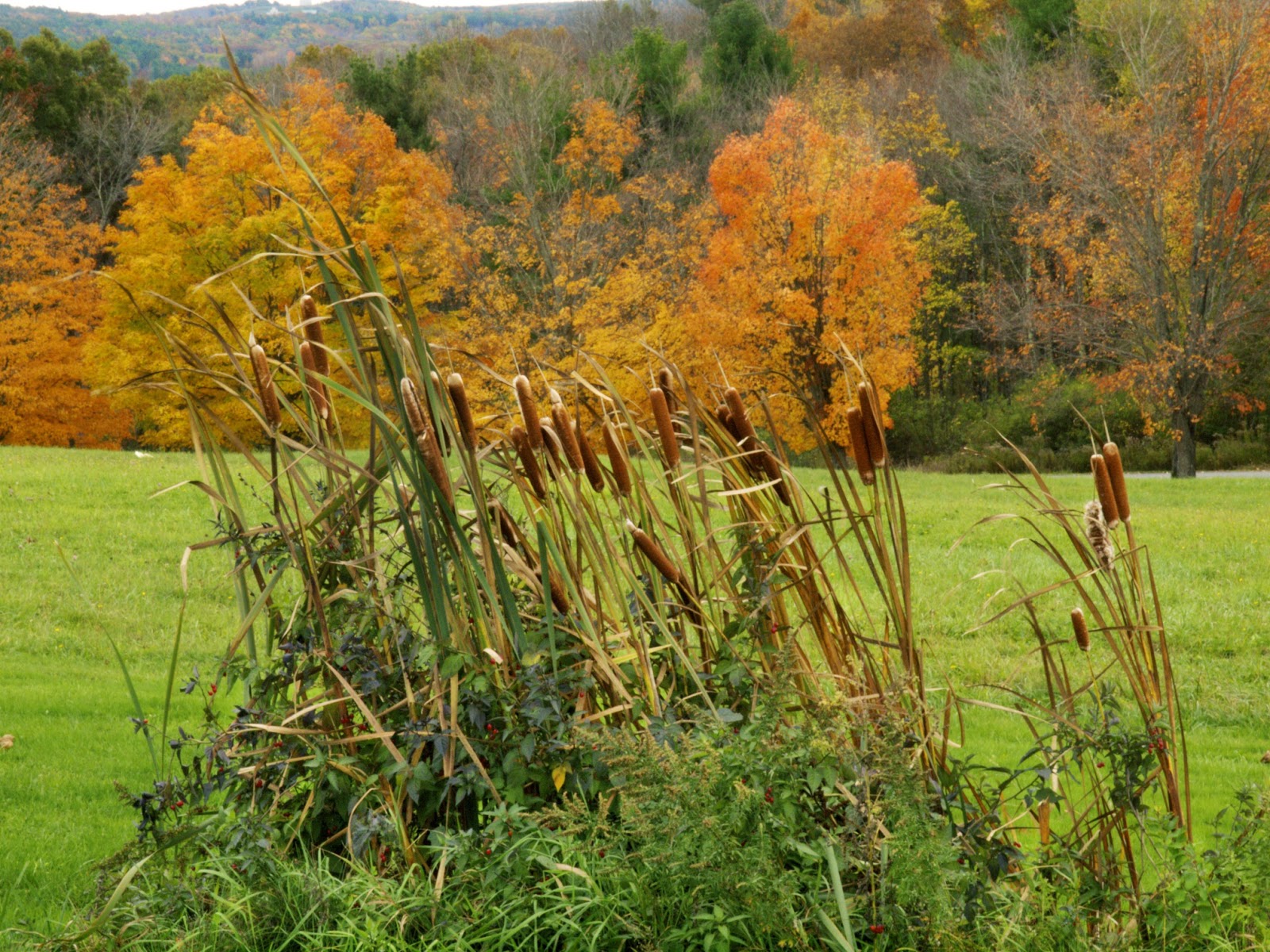 There was ivy climbing on the pink wall of one of the buildings. 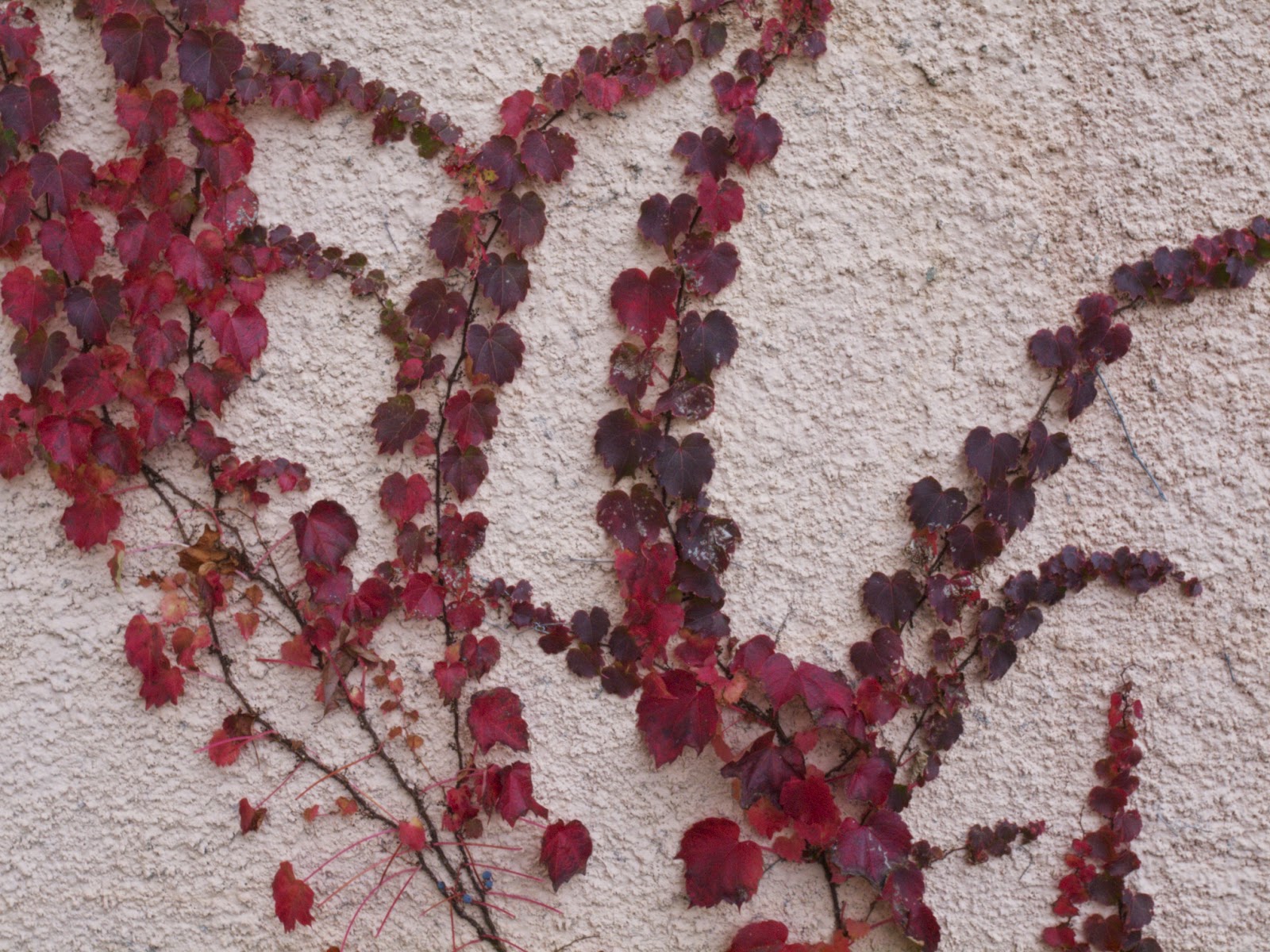 The road leads about a mile before it ends at the boundaries of the enclosure.  There is another road in the other direction about the same distance.  The abbey sits on 2000 acres of beautiful rolling land. 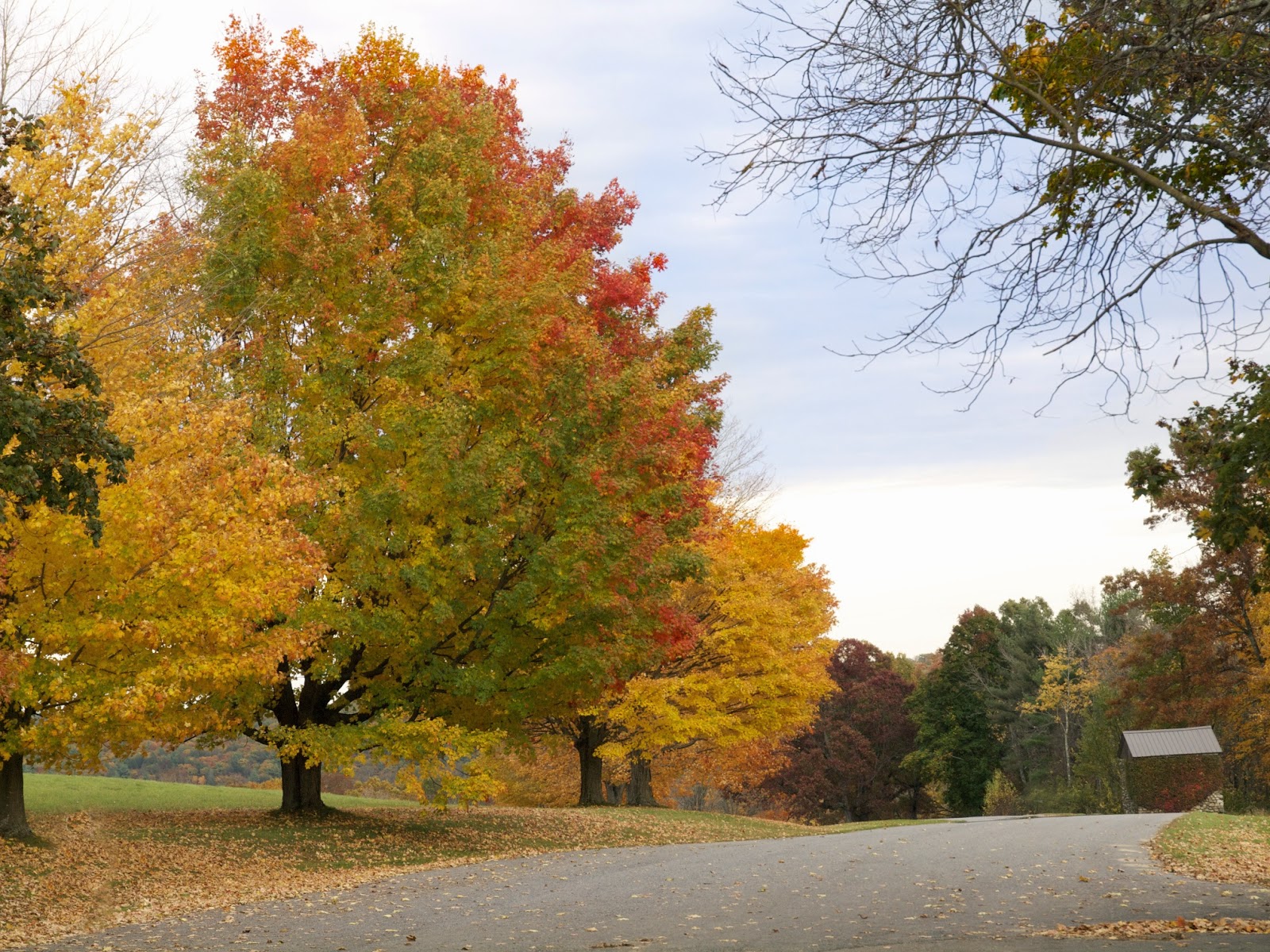 The Trappist Preserve plant is highly mechanized.  The monastery, founded in Rhode Island, was moved to MA in the 1950's.  The original plan was to make a foundation in MA but the monastery in RI burned and thus everything moved to Spencer. 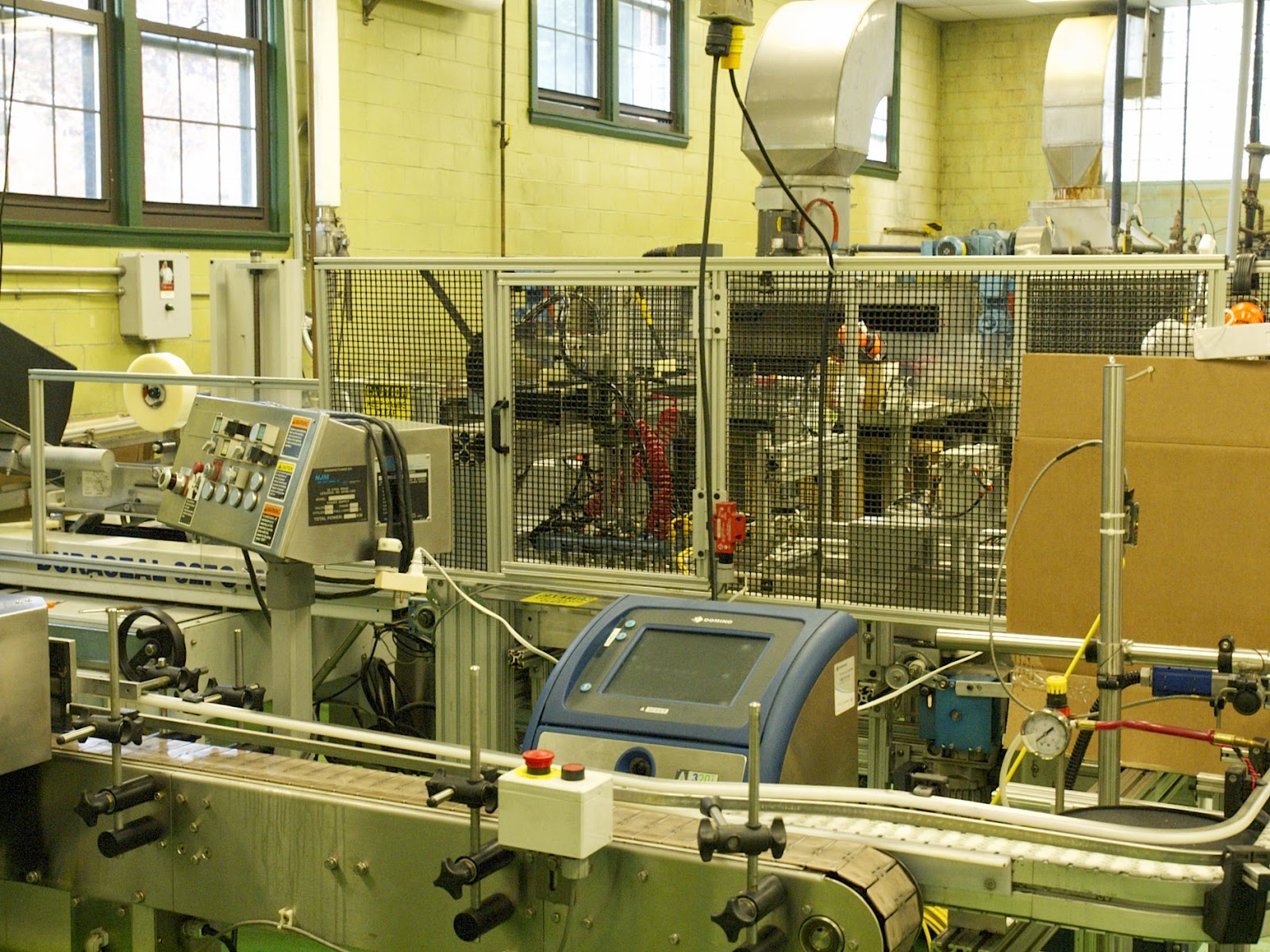 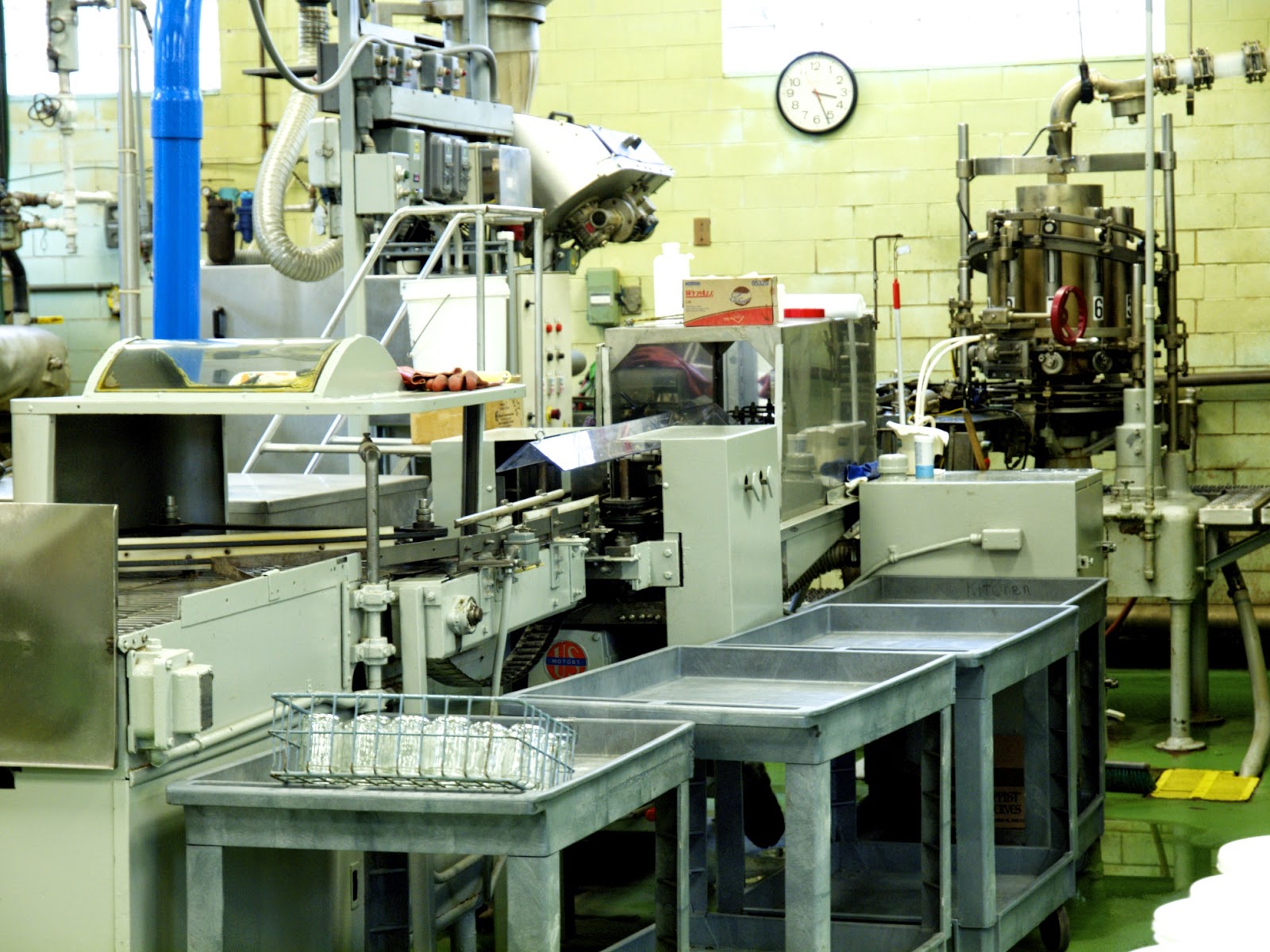 The storage area fascinated me.  One of the monks wondered why I was taking a photo of an ugly green and very large storage area.  Answer:  Because it looks great in black and white as a study in angles and geometry. 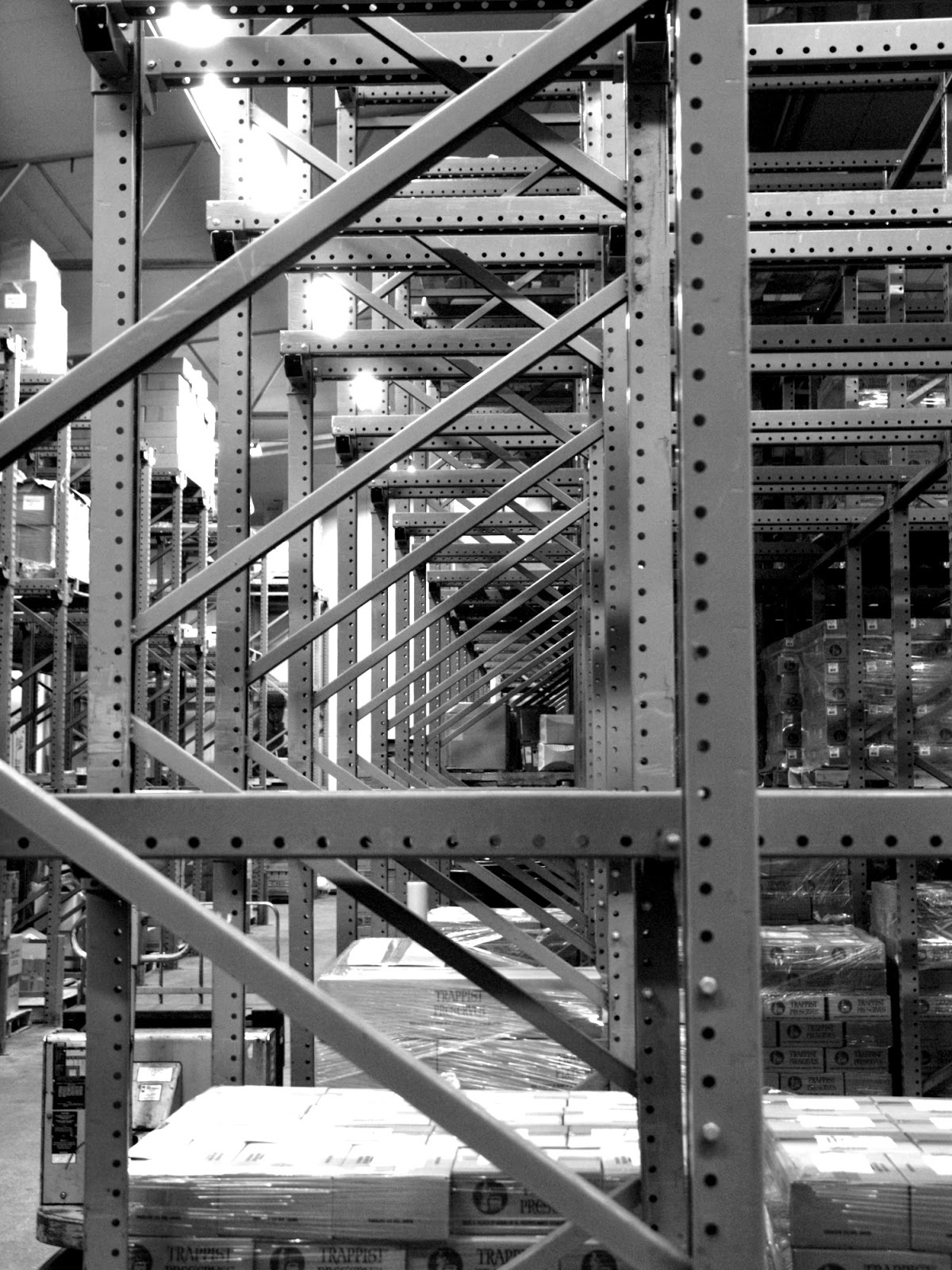 The prior (second after the abbott) gave the men the tour.  He is the one in the white robe and black scapular. 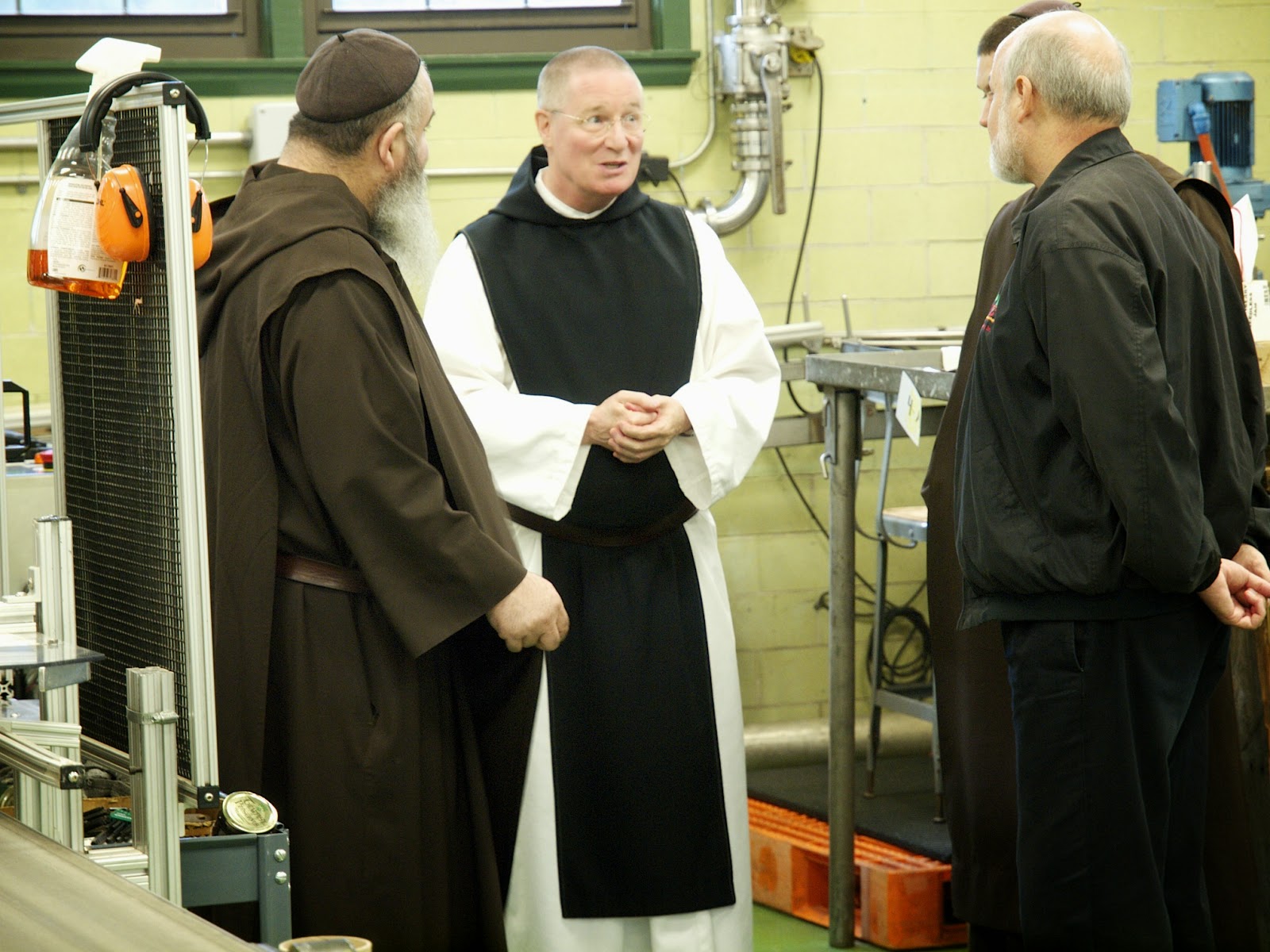 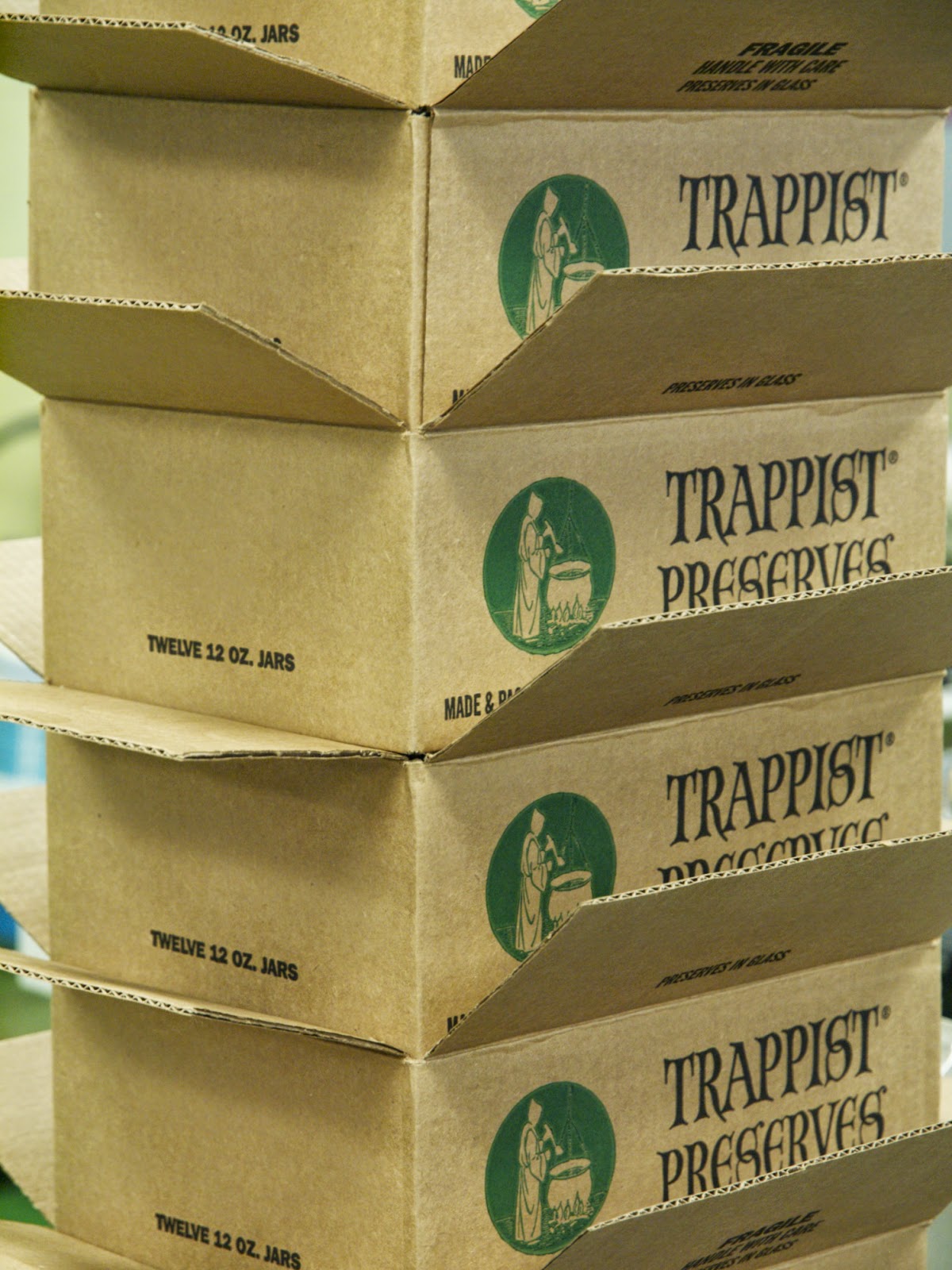 These are some of the preserves.  The ginger preserve is also amazing (along with mango pepper, cranberry pepper, and the usual flavors). 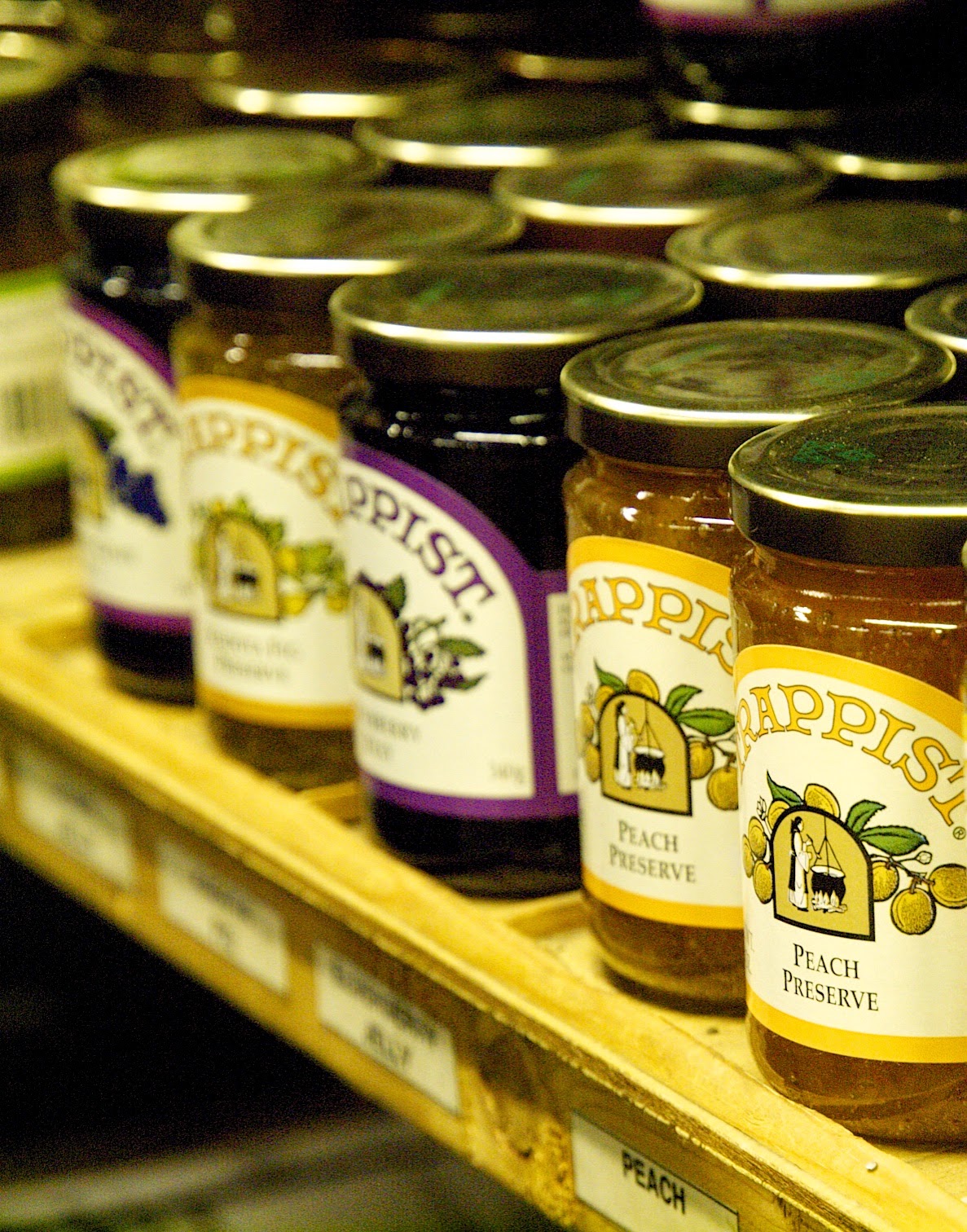 The Holy Rood Guild showroom where the vestments are displayed and sold is like Nordstrom's or Sak's for Catholic priests.  The colors and textures of the fabrics were the reason for the photos.  The first is a watered silk chasuble that is on display.  They don't make anything of watered silk these days. 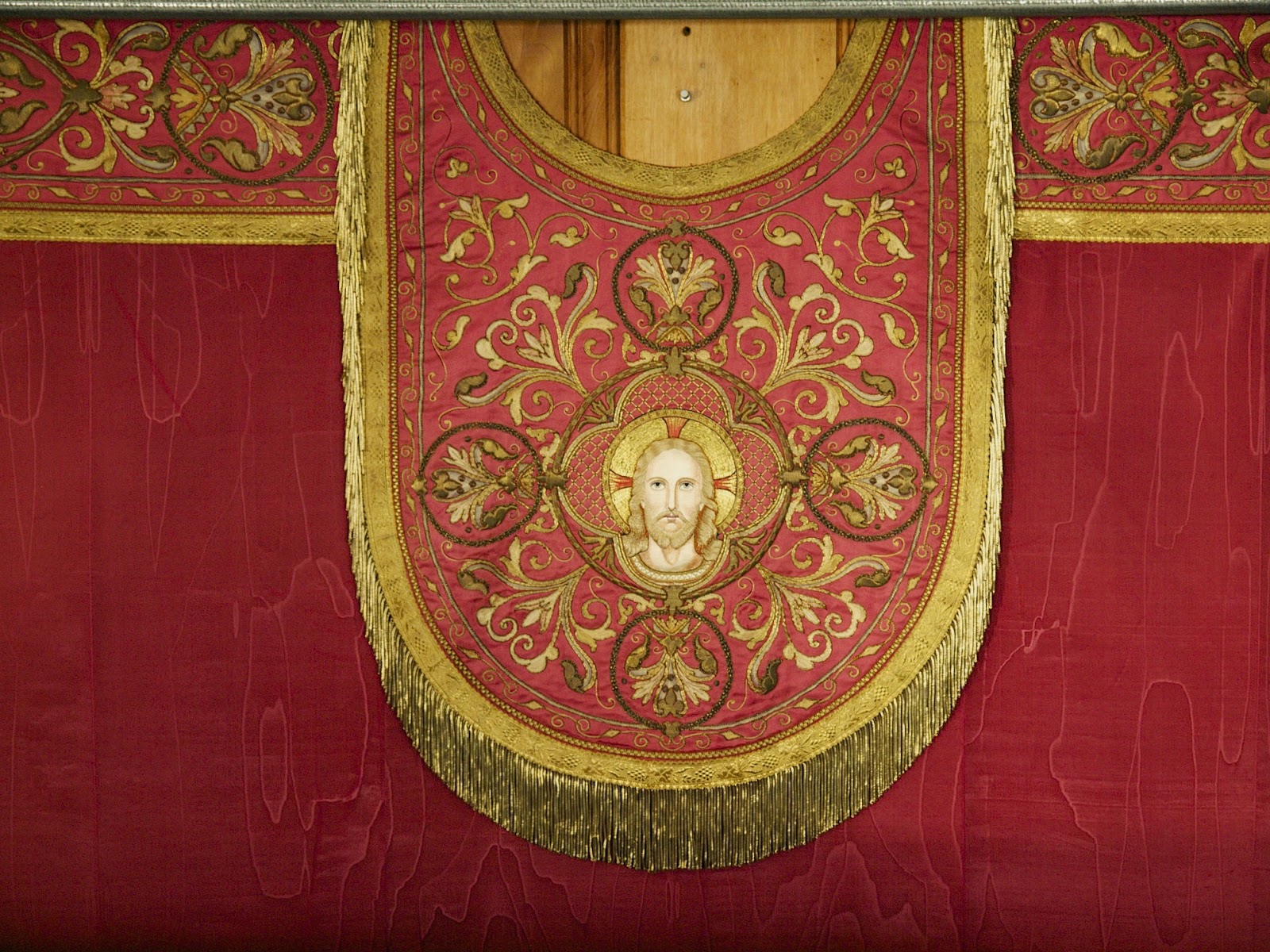 I took the next three because of the color and texture.  Sometimes photography needs an abstract or at least a non-figurative approach. 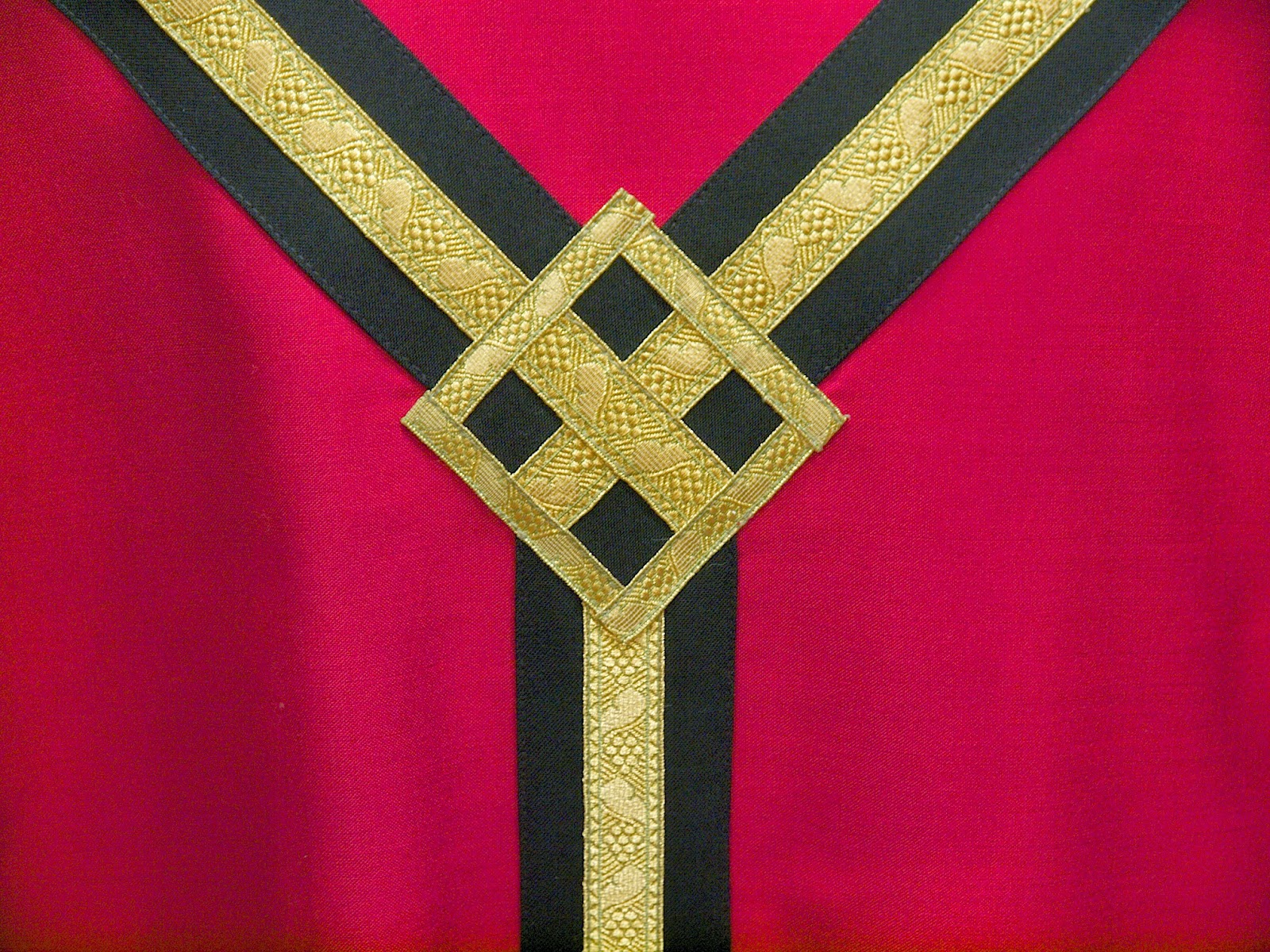 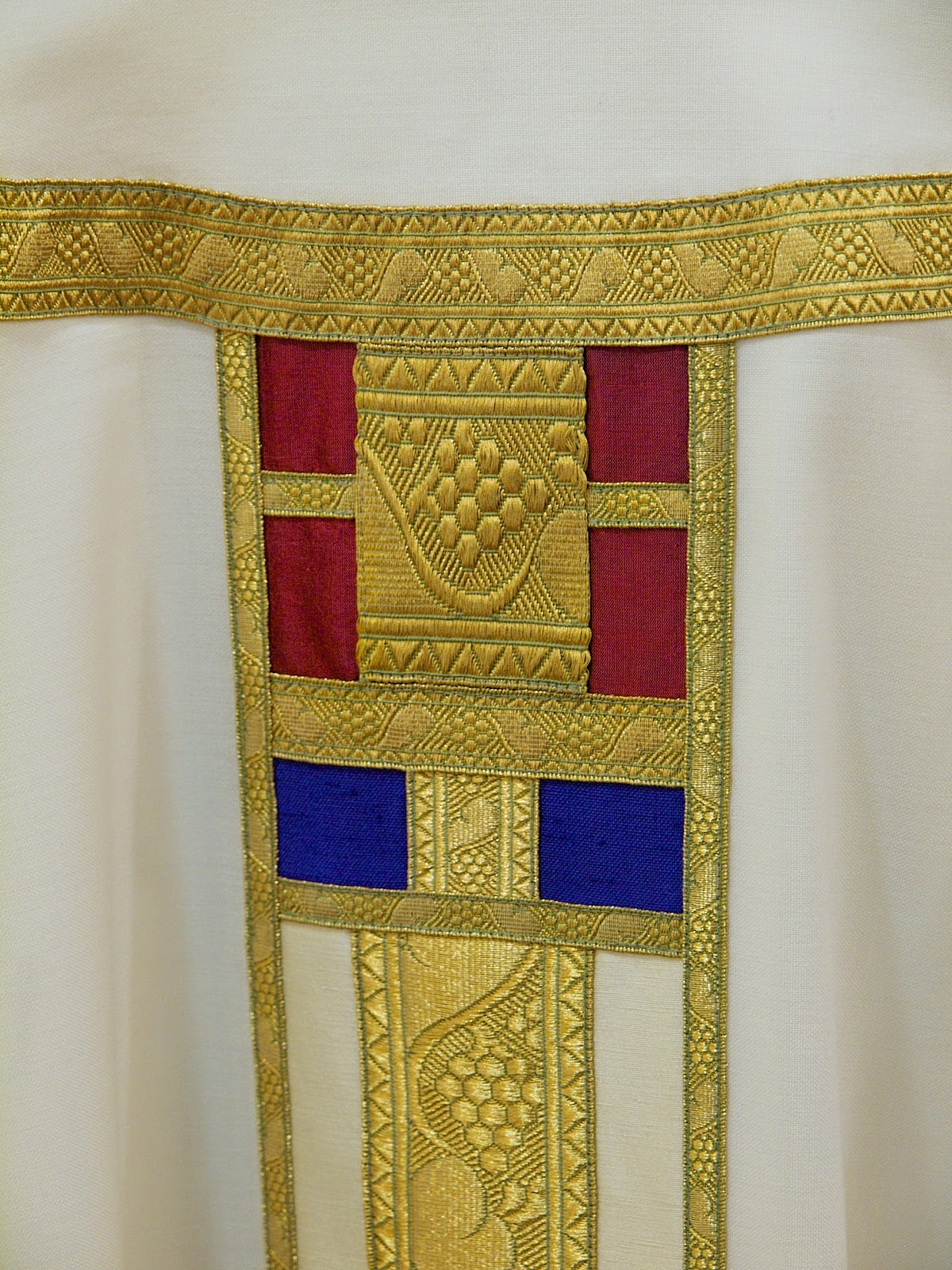 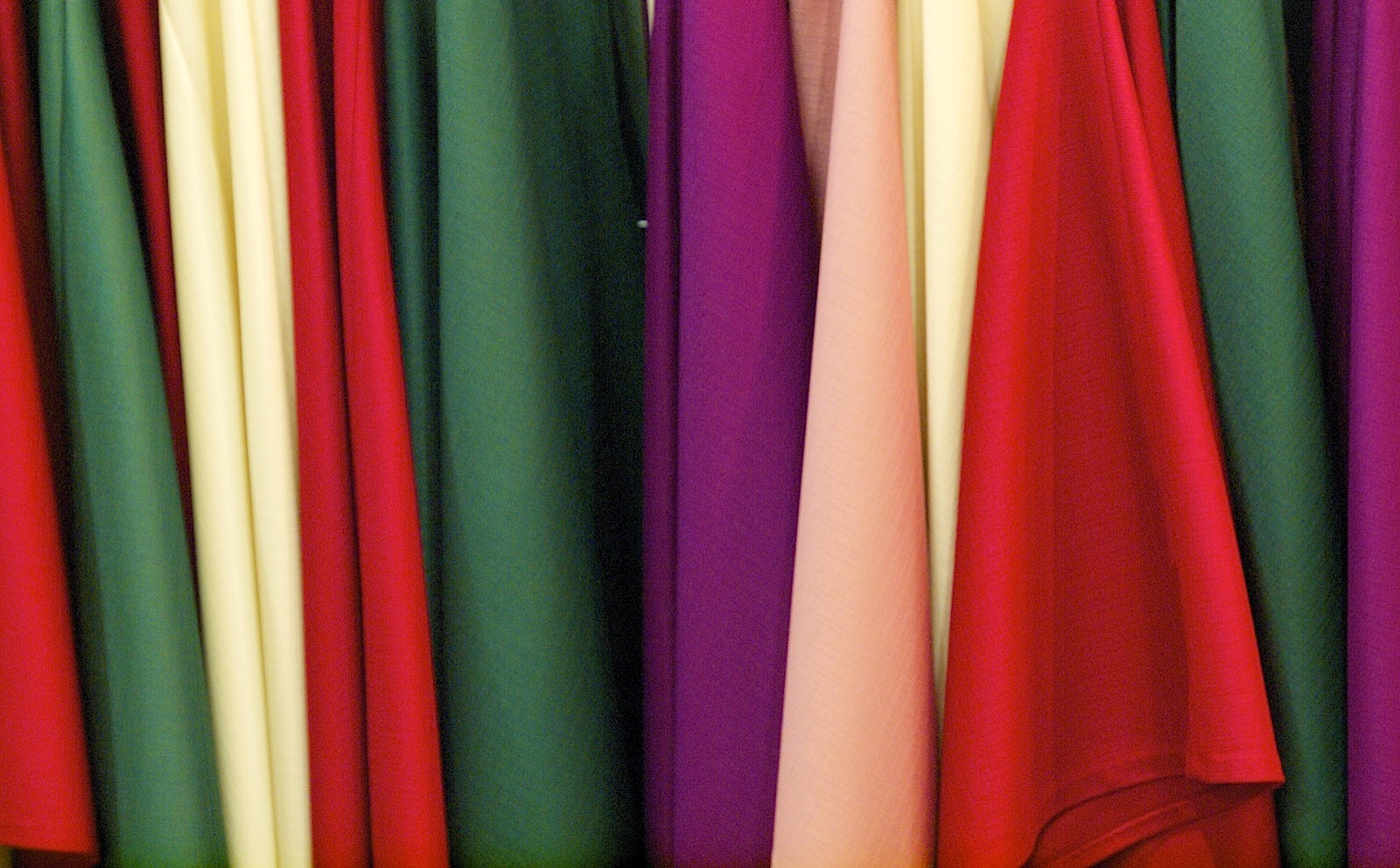 As we were leaving the cloud cover arrived allowing this photo of the sun's rays. 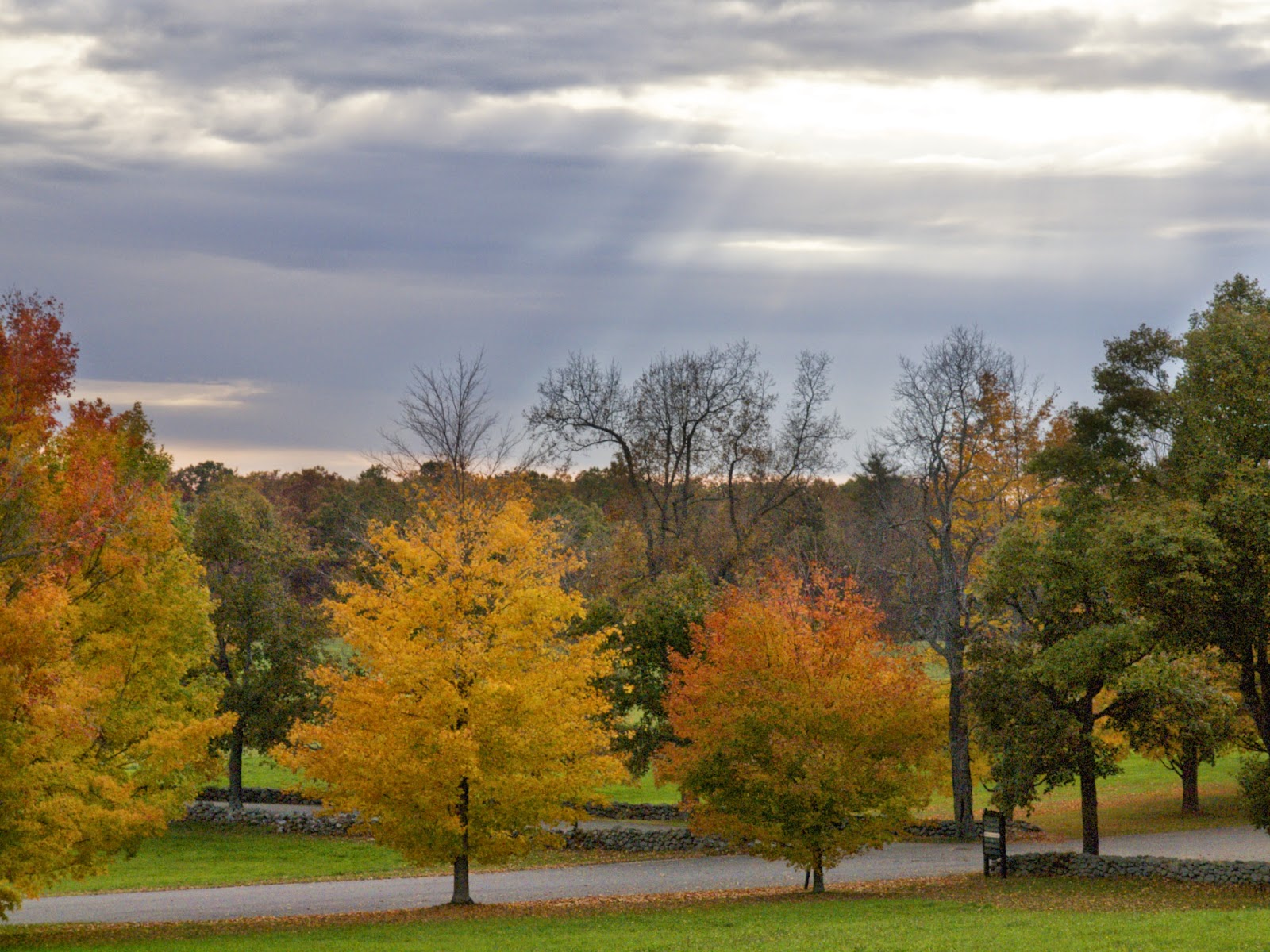 And here we have the happy group at the end of a good day. 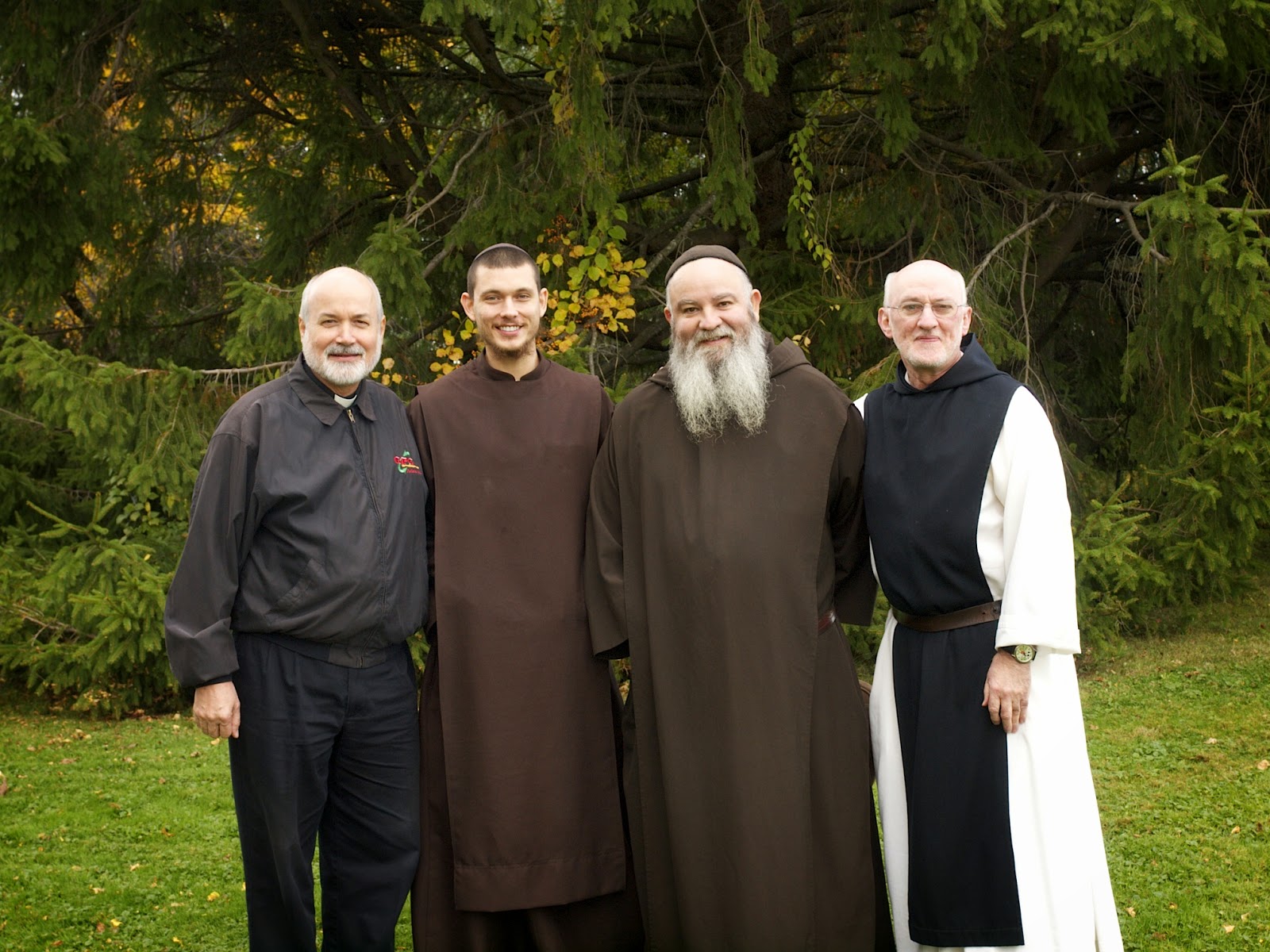 Today’s gospel begins where last Sunday’s ended.  The first reading and the Gospel illustrate the dependence of the New Testament upon the Old Testament.  They remind us that Jesus came not to abolish the Old Covenant  but to fulfill it.  The images that Jesus used in the parable, the vineyard, the wine press, and the tower came directly from Isaiah. They make the same painful point about fidelity to God’s law.  But Jesus moved beyond Isaiah.

Cultivating a vineyard is an extremely complicated and difficult undertaking.
During tertianship, the last formal training a Jesuit does before he is called to final vows, our twelve-man tertian class made the thirty-day retreat at the Sevenhill Jesuit Retreat House on the grounds of the Jesuit winery just outside of Clare, South Australia.  The Clare Valley, with 35 wineries, is one of the centers of the Australian wine industry.  Sevenhill, established 135 years ago, was the first of the wineries.  It sits on 1000 acres rolling hills covered with grape vines.  The setting is beyond beautiful.  But, the beauty obscures an important fact, caring for a vineyard is difficult ,demanding, and at times, thankless work.  Sometimes, despite precautions, backbreaking work, the commitment of the wine master and the  dedication of the workers, the harvest is not good and the wines are less than wonderful.

Unfortunately, 2011 was a catastrophic year in the Clare Valley.  It was unusually cold and cloudy. There was way too much rain during the critical harvest period.  In the end only sixty percent of the grapes were harvested.  The others died on the vine.  But, the winemakers at Sevenhill and the rest of the Valley did not give up.   At out place, Brother John and his staff continued to nurture the vines, nourish the soil, and do whatever else was necessary for the following year's harvest.  So it is with God who loves us and forgives sin.

In the first reading we heard the vineyard owner’s dismay when, despite constructing the vineyard, putting in a watchtower to prevent sabotage, and carefully cultivating the grapes, he harvested not sweet grapes but useless sour wild grapes.

Isaiah was, like Jesus in the gospel, using the image of the vineyard for the people of Israel, people who, despite God’s care for them, worshipped false idols, ignored the law, and became like sour wild grapes that could not be used for fine wine.  But there is hope.  There is hope of reestablishing the loving relationship between God and His people.

The psalm plays off Isaiah’s images.  Once again the vineyard is a symbol for the people.  The psalmist asks the Lord to restore the vineyard, to resume caring for it, despite the poor harvest, despite the people abandoning the covenant yet again.  If He does this they will no longer withdraw from Him.  There is a combination of confession, faith, and bargaining going on in the psalm.  But the psalmist, who captured the essence of human behavior in this psalm, knows that God is forgiving and will relent.

Jesus takes the vineyard image further than Isaiah.  He predicts his death.  But he also tells of the mission to the Gentiles, those who were not part of the original covenant.  “The stone that the builders rejected has become the cornerstone.”  Truer words have never been uttered.

There are three more verses at the end of this parable.  The last two are critical to put the parable’s effect, and of all of Jesus’ teaching in context.  “When the chief priests and the Pharisees heard his parables, they knew that he was speaking about them.  And although they were attempting to arrest him, they feared the crowds for they regarded him as a prophet.”  The truth hurts.  Sometimes the truth hurts the one who states it.  Killing the bearer of the truth may be much easier than making fundamental changes in our lives and actions as a result of being told that truth.

Yesterday, was perhaps one of the most mind-blowing days for those who love Division I College Football.  Penn State was not playing nor was Boston College.  However, the upsets, the 'last plays' and everything else came together for one of the most fun days of football watching in a long time.  Even when a buddy stopped in unexpectedly and we decided to grab a pizza, the fun was merely interrupted not ended.  The end of the USC-Arizona State game may have pushed "The Pass" (Doug Flutie to Gerald Phalen) out of advertising.  Alas, the next few Saturdays are going to be very busy and football watching will be at a minimum.  Then comes my 8-day retreat.  At a monastery.  No football.

Below are some of the photos from Chad.  I didn't take many during the month there.  I was forbidden from being seen in public with the camera.  Thus the shots I took were limited to the hospital, school, the grounds, and other private settings.  Did get a few from the roof of the medical school.  I wanted to get some more but the friend who took me up to the roof came down with malaria.  Asking him to walk up five flights did not seem like a good idea.  Next year perhaps.

Doing an EKG in class at the medical school.  I haven't seen the sucker cups in years.  There was nothing worse in medical school than having to apply these to a man's chest if it was hairy.  Even on smooth skin they didn't always adhere well despite the goop. 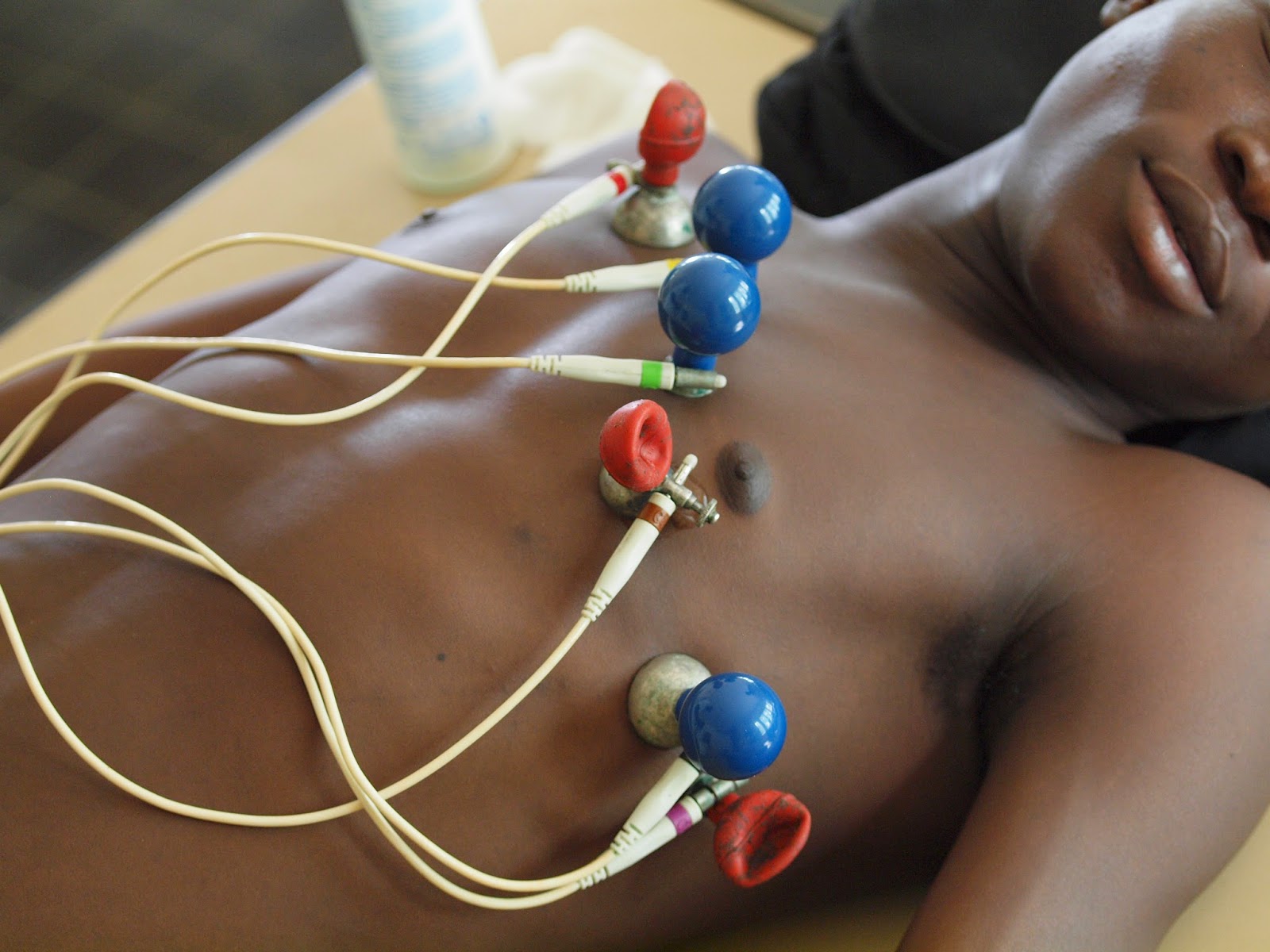 The front entrance of the medical school. 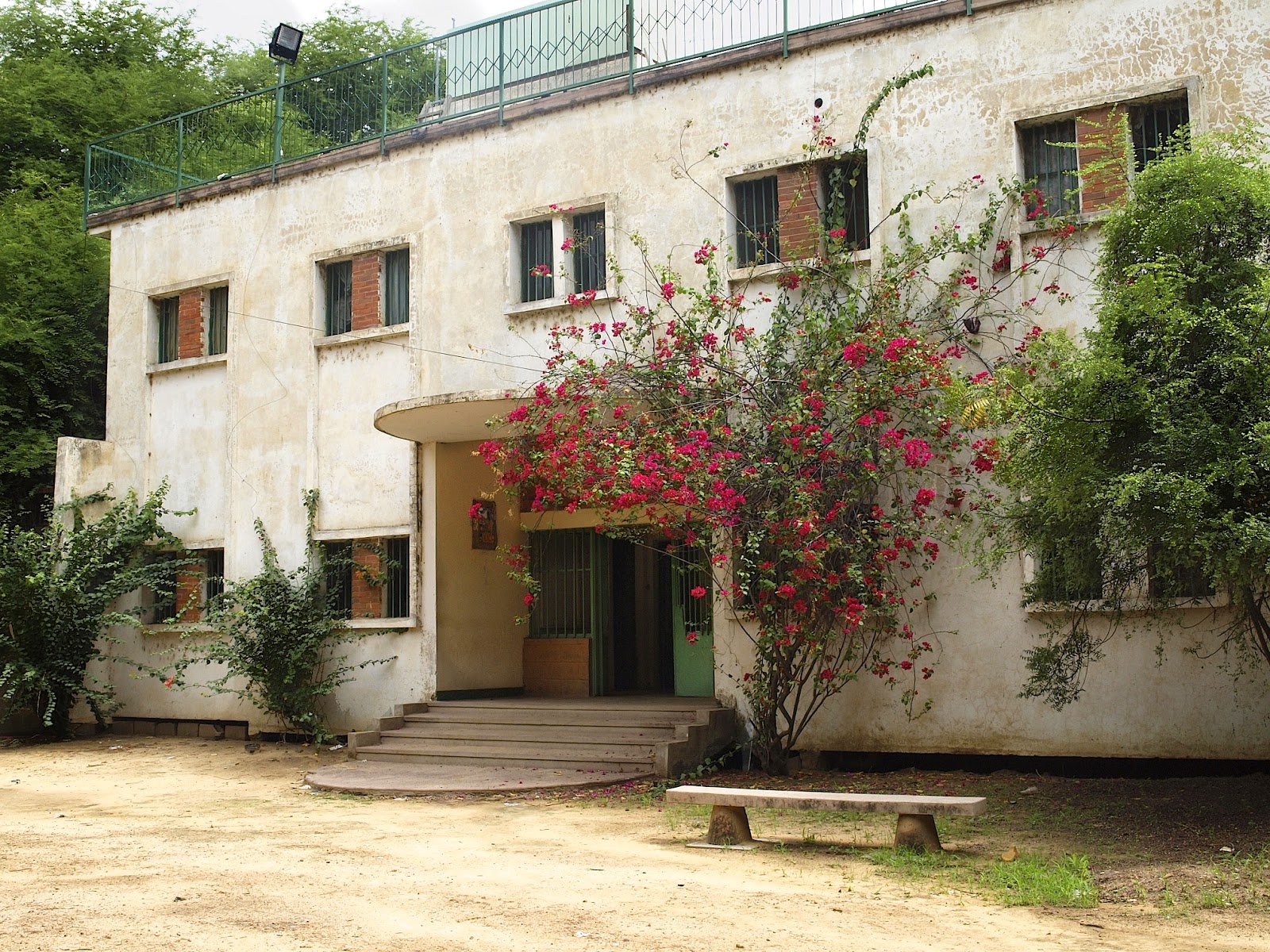 Carlos, a Jesuit MD, teaching.  He was using a tree branch as a pointer.  A few minutes after this I remembered the laser pointer with slide advancer in my briefcase.  With a total lack of tact and class I got up, walked to the front of the room, took the twig and gave him the pointer.  "Use this."  He did.  It is still there. 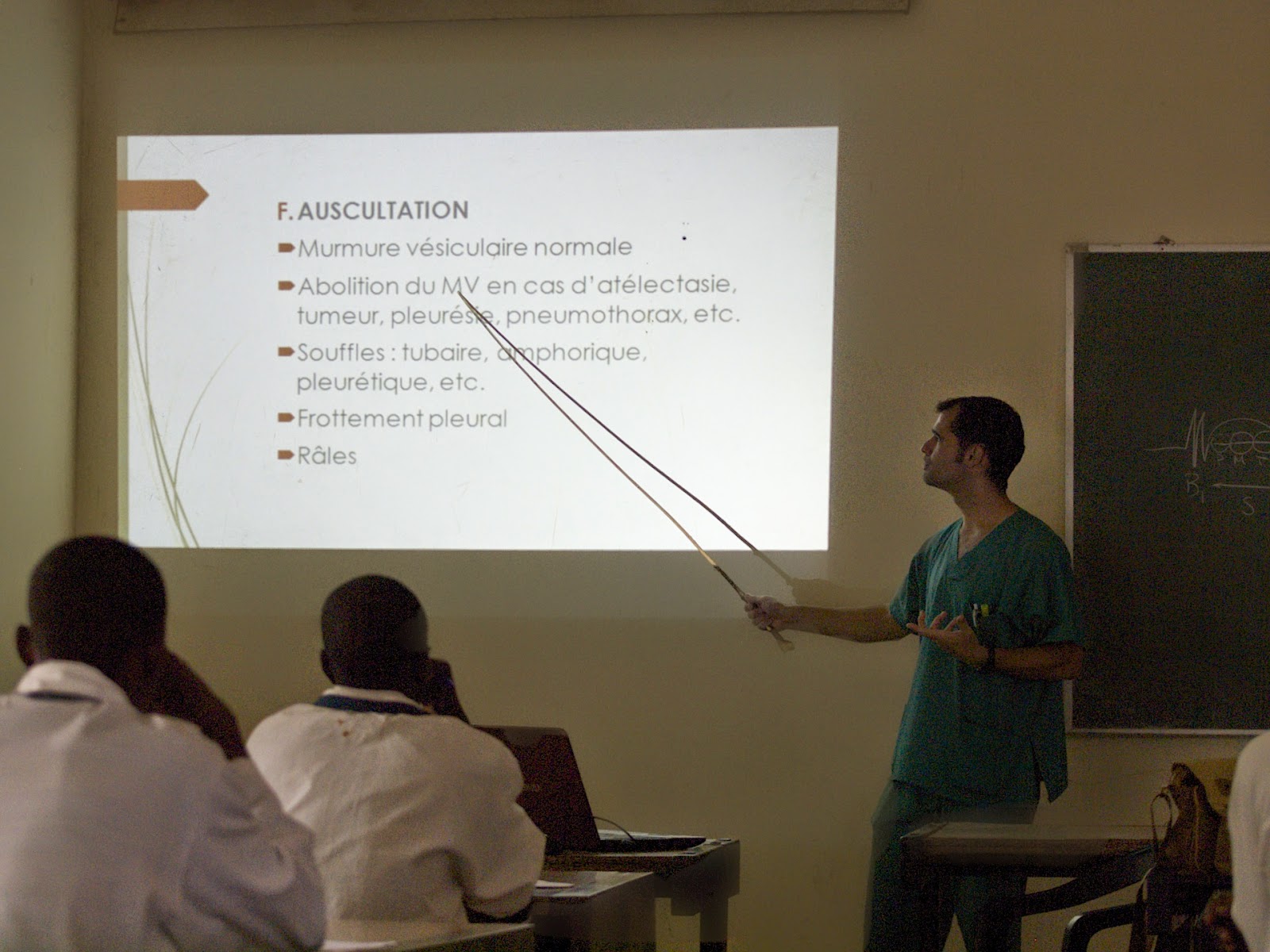 The view from the medical school across the street.  The people are not walking on the wall though it appears that way.  The hospital complex grounds were below the grade of the road.  Drivers had to go slowly pulling into the hospital because of the dip. 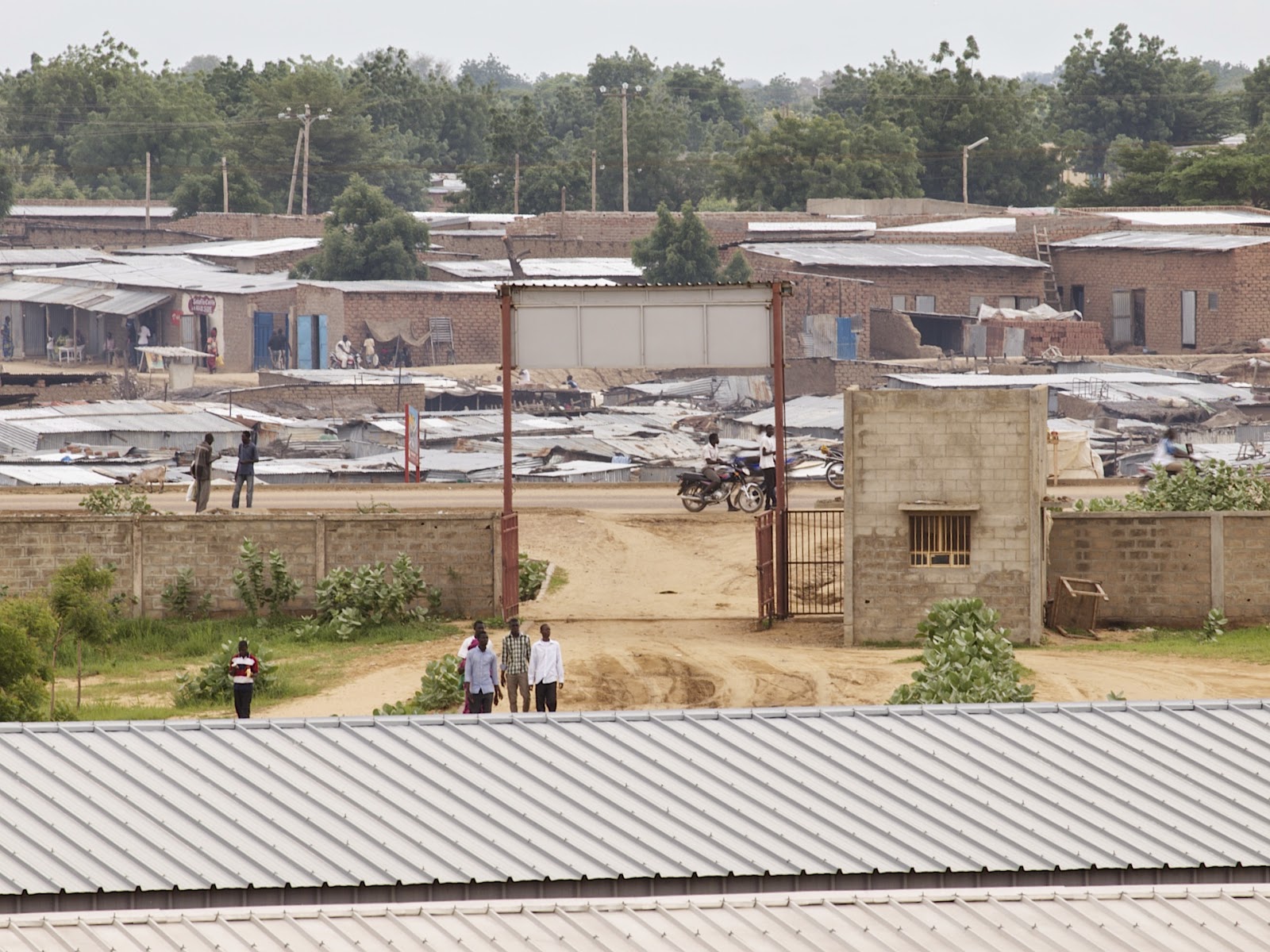 A statue of the Bon Samaritain (Good Samaritan) on the hospital grounds. 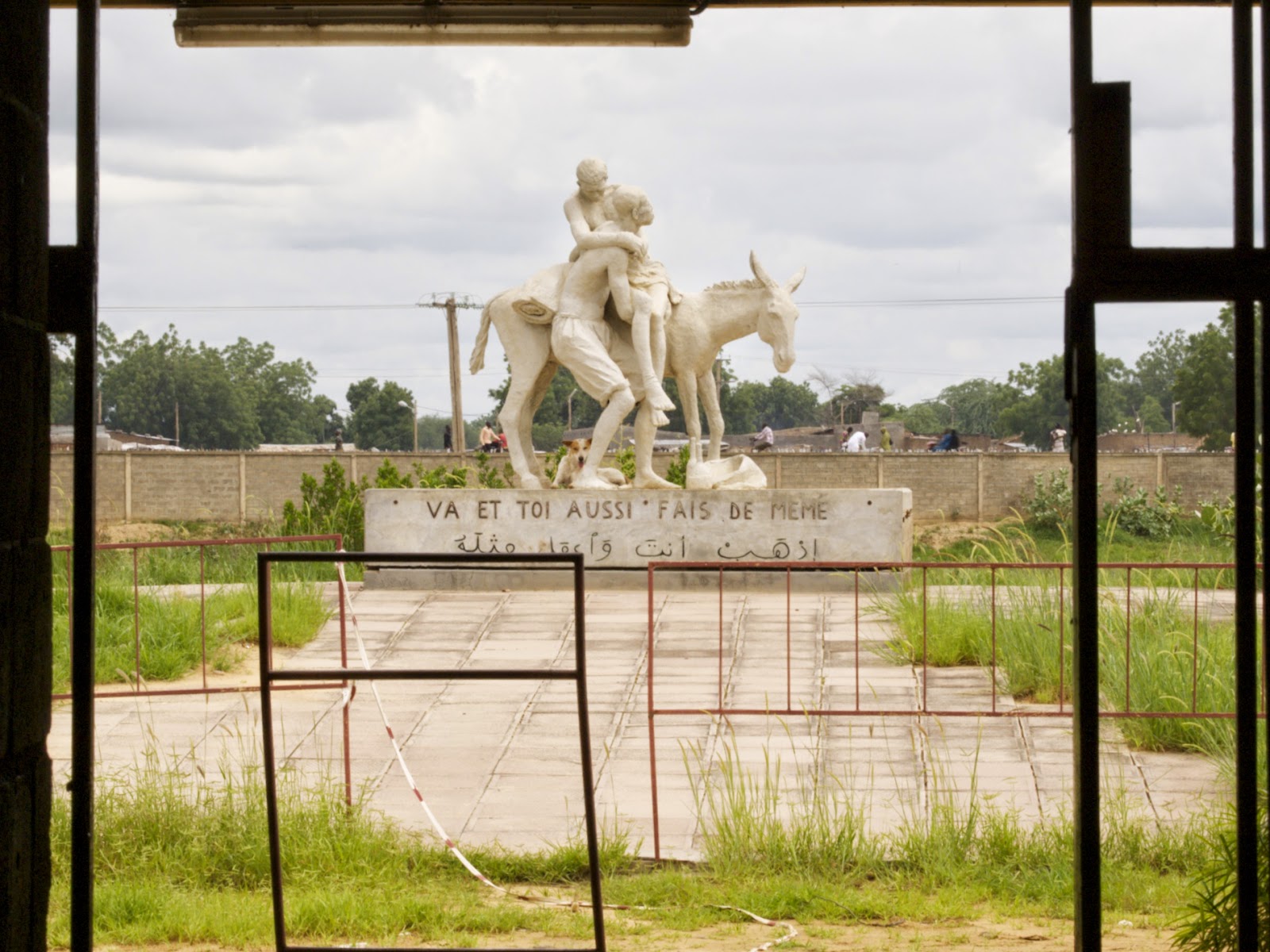 Teaching how to take blood pressure. 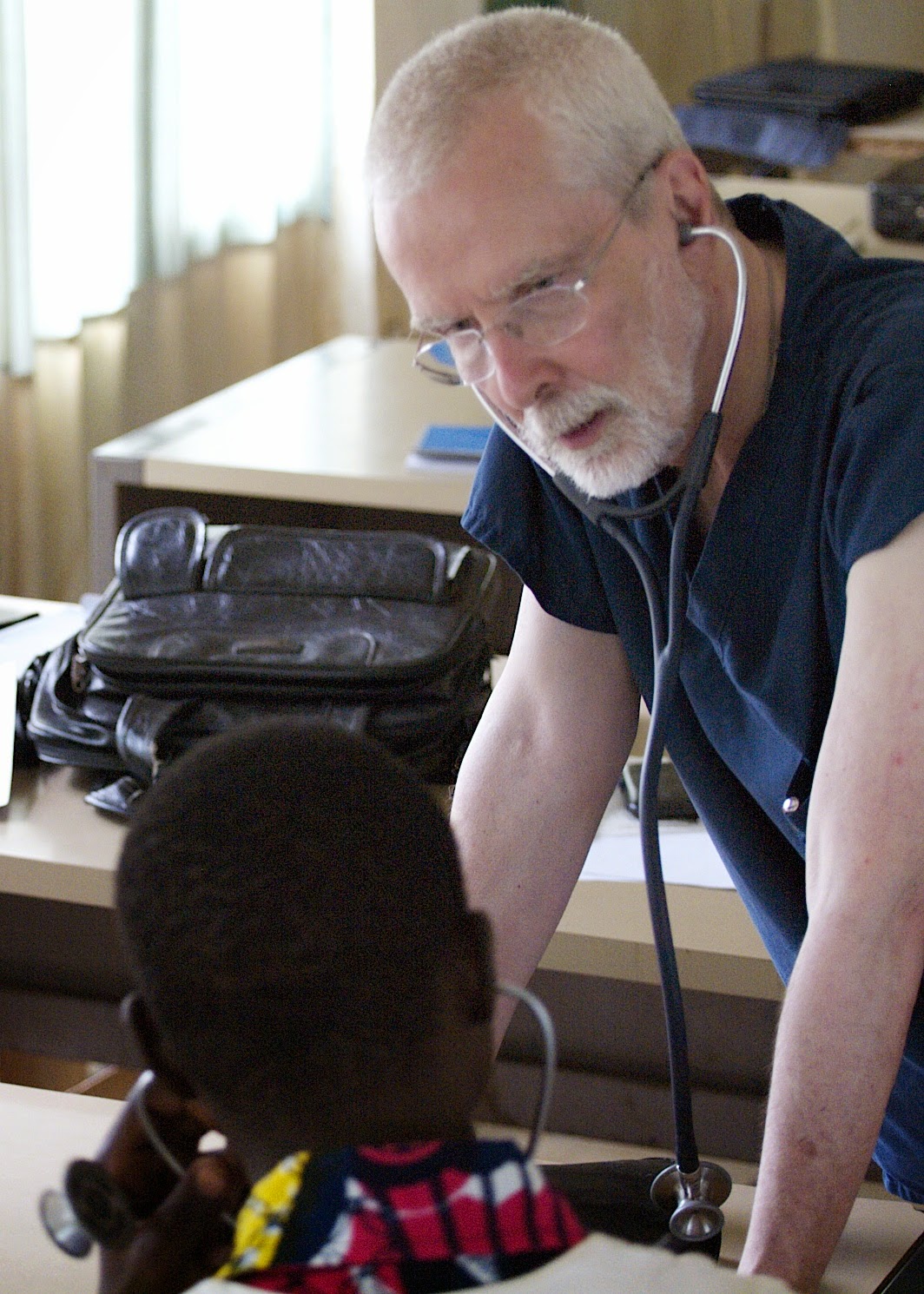