I was startled to see I posted nothing since Palm Sunday.  It has been more than a little busy.  Ignatius and I went to Plymouth for the Triduum and returned on Easter Sunday after a detour to visit one of his parishioners who is now doing a PhD at UConn in Storrs.  I thought Penn State was isolated when I was a student in the late '60's and early '70's.  Not so compared with UConn.  However, we had a very good Chinese meal just down the street from the university.  Alas, by the time we got to the I-84/Mass Pike intersection, traffic was backed up.  We took Rt. 20.  Long.

A recent trip to the Midwest to lecture at a bioethics conference took a lot of time as well.  Life is beginning to settle a bit though total settling won't come until 1 June.

I will celebrate the 10 AM Mass at Campion on Sunday 21 April, the 50th Annual World Day of Prayer for Vocations to the Priesthood and Religious Life.  For that reason the homily below makes little reference to the readings or Gospel but focuses on the mystery of religious vocation.

Today, as we do annually on the 4th Sunday of Easter, we observe the World Day of Prayer for Vocations to the priesthood and religious life. This is the 50th year for this observance that was instituted by Pope Paul VI of happy memory.  In his letter reflecting on this observance, Holy Father Francis took the theme,  "Vocations as a Sign of Hope Founded in Faith."  He chose this theme because as he noted, "Hope. . . is a key word in biblical faith, to the extent that in certain passages, the words faith and hope seem to be interchangeable."

A sign of hope founded in faith is an accurate description of following Jesus' call "Come follow me," words Jesus said to the young man in Mark's Gospel who asked, "Good teacher, what must I do to inherit eternal life?"  When Jesus replied in part, "You lack one thing . . . go, sell what you have and give to the poor . . . and come follow me" Mark tells us that the young man was taken aback. "His countenance fell and he went away sorrowful; for he had great possessions."
Happily, great possessions do not always interfere with the radical yes to Jesus' seemingly impossible invitation to "Come follow me."

By graduation, the Villanova basketball player had scored 2,408 points and made 1,171 rebounds.  After four years in the pros the salary, the "stuff" and everything that went with it, was not important.  And so, in 1991, Mary Michelle Pennefather, known as Shelley, walked through the doors of the Monastery of the Poor Clare Colletines in Alexandria, Virginia where, now known as Sr. Rose Marie, she remains within the cloister.

Grant Desme announced his retirement in January 2010.   At the time, he was a second round draft pick of the Oakland A's and a prime prospect who received a six-figure signing bonus.  His call up to the majors was inevitable.  His call to religious life was, to some, incredible.  Now known as Frater Matthew, Grant entered the Norbertine Community in California where he is now in philosophy.  When the story appeared on the ESPN website, comments appeared quickly.   Some were supportive but many, too many, were hostile and/or obscene.  It seems that ESPN doesn't monitor its board too closely.

After four games with the New England Revolution pro soccer team in 2008, Chase Helgenbrinck, a former U.S. National team player who also played pro soccer in Chile for four years, retired.  He entered Mt. St. Mary's Seminary, in Emmitsburg, MD as a seminarian for the diocese of Peoria, IL.  He describes the reaction to the intersection of sports and religion as "polarizing."  He apparently is a master of understatement.

The final vocation story is the oldest.  In 1963 Dolores Hart, who had made 10 movies in five years, including one in which she gave Elvis Presley his first screen kiss, got out of a car in Bethlehem, CT.  The studio that had arranged the driver was not aware that when she walked through the door of Regina Laudis Benedictine Abbey she would not emerge for decades. Today, Mother Dolores is prioress of the monastery. If you want to see her at her stunningly beautiful best, see the cult classic, "Where the Boys Are."

Each of them struggled--and will continue to struggle--with doubt and uncertainties.  A religious vocation is NOT easy. It doesn't answer all questions or remove all doubts.  It is not a life free from stress or a life overflowing with mystical consolations.  The first several years of settling into one's vocation, the time of figuring it out, are very difficult.  Many don't figure it out and leave.  But, the faith and hope that caused one to say yes, I will follow you, the faith and hope that compelled one to "go, sell what you have and give to the poor . . . and come follow me" deepens one's life in all its dimensions. Ultimately it frees one to live.
Indeed, freedom from the distractions of money and fame is another common denominator in the vocation stories of Shelley Pennefather, Dolores Hart, Grant Desme, and Chase Helgenbrinck.

Most importantly a religious vocation requires that someone ask without fear of scorn or rejection.  "Have you ever thought of becoming a . . Jesuit, Sister of Mercy, Franciscan brother, priest?"  Fill in the blank as needed.

As Holy Father Francis notes, accepting Jesus' invitation means no longer choosing our own path, but immersing our will in the will of Jesus.  That immersion is accomplished only in the hope and faith that pushes us toward the future and sustains us in the present.  Rooted in the past of their order, religious are in the present while being pushed and, ideally, pushing others, toward the future limned for us through Jesus' saving act.  And so we can sing with the psalmist,

"The Lord is good:
his kindness endures forever,
and his faithfulness,
to all generations."
_______________________________________
It seems that still life photos are exerting an increasing attraction.  Three were taken back home in St. Mary's Church in Plymouth, PA on Holy Saturday afternoon.  I had taken Ignatius over to check some things out.  The light was perfect.  The others are from Campion Center.  Also home.

The first three are flowers arranged around the altar on Holy Saturday.  The white roses seem suspended in space.  The effect of the sunlight streaming through the stained glass windows on the lilies was remarkable.  It is enhanced by the black and white with strong contrast. 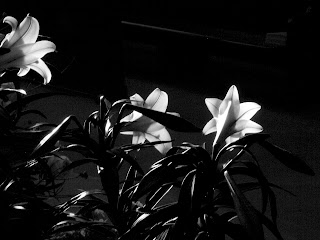 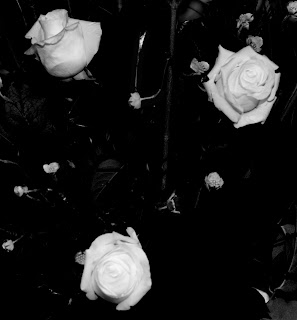 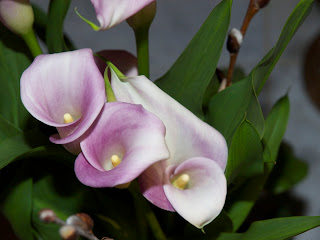 A still life of the thurible and some glassware in the sacristy.  Ignatius did a lot of work to straighten out a room that needed straightening out and purging for quite a long time.  We have more to do there this coming week but it looks a lot better. I happened to have the camera when the sun hit the balustrade on the second floor of the rotunda.  It only lasted about ten minutes before the sun continued its journey toward evening and the rotunda went into shadow. 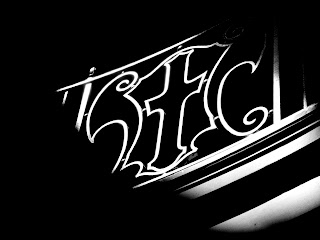 And this is the rotunda taken shortly after the shot above.  I haven't yet laid on my back to shoot directly up though it is in the plans.  However, I'm not doing it in good clothes. 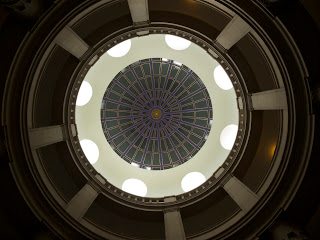 The processional cross hangs in the front of the chapel.  The sun was hitting it just right. 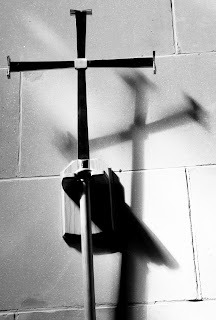 Finally, Ignatius of Loyola in bas relief.  I've worn a medal of the same image daily since a week after entering the novitiate. 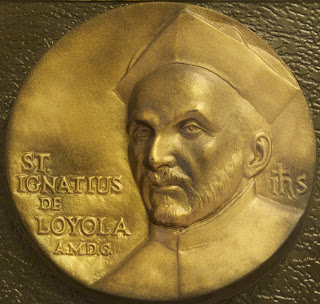