The readings for this second Sunday in Lent include some interpretive challenges.  The ritual described in the first reading from Genesis is particularly odd. It is the sort of thing one is tempted to say,“whatever” and wait for the gospel.  It does not resonate with modern sensibilities.  Indeed, it would send the domestic terrorist group known as PETA into spasms of indignation.  What does it mean to slice several animals in half—except for the birds—and place the halves on the ground opposite each other?  What about the passage describing the movement of a smoking pot and a torch between the pieces?

Fortunately, the commentary on these passages from The Jewish Study Bible helps clear up the confusion and put things in a covenantal context.  It notes:  “The ritual of cutting animals in half and passing between them is found in both the Bible and in Mesopotamia. . . . It is likely that the essence of this ritual is a self-curse such that those walking between the bisected sacrifices will be like the dead animals if they violate the covenant.”

The smoking fire pot and flaming torch symbolize the Lord.  Thus, the Lord is invoking a self-curse.  Oddly enough, the reading says nothing about Abram’s obligations in this covenant.  This covenant is pure gift, a reward for past loyalty, without obligations placed on the recipient.

Abram—who had not yet been instructed to change his name to Abraham—was promised first, that his progeny would outnumber the stars.  Second, that he would possess the land.  Thus, his question “How am I to know that I shall possess it” is answered in the starkest most definitive terms possible.

The Jewish Study Bible makes another subtle point in its commentary on verse seven:

The commentator notes that the verse resembles the beginning of the Decalogue in Exodus, “I am the Lord your God who brought you out of the land of Egypt.”  This wording suggests that Abram’s life foreshadows that of his descendants, whose enslavement is predicted in the verses not included in this reading.

The theme of foreshadowing continues through the second reading and the Gospel.   Paul is emphatic stating that Jesus will change our lowly bodies to conform with His glorified body—something that could not occur through a ritual or a magic incantation but only through Jesus who first conformed His body--and His life-- to ours; like us in all things but sin.   As she does annually on the First Sunday of Lent the Church recounted the temptations in the desert so as to remind us of this.  The Second Sunday of Lent always considers the Transfiguration.

The Transfiguration appears in all three synoptic Gospels.  There are some relatively minor differences across the three accounts but the main actors and the content are consistent.  Jesus’ Transfiguration both points us towards and draws us into a mystery.  It is a mystery beyond the reach of historical reconstruction, scientific explanation or geographic specificity.  All of which are irrelevant.  We are told of Jesus appearing in brilliant glory before three of his disciples.  “While he was praying his face changed in appearance and his clothing became dazzling white.”  Imagine the scene. Make the composition of place and the application of the senses.  Moses and Elijah, the Law and the Prophets, are there with Jesus.

It is obvious that the apostles were confused and frightened.  To say that any of us would have acted differently would be absurd and dishonest.  As he became anxious Peter began to speak without thinking what he was saying.  Despite the vogue for apostle bashing in some circles, none of us would have responded any better.  Most likely, we would have acted worse; doing something such as pulling out the Ancient Near East equivalent of a cell phone and snapping pictures to tweet to the rest of the apostles at the bottom of the mountain.  As the tension increased the voice of  God the Father confirmed  that Jesus was who Peter confessed him to be just a little earlier in this chapter of the Gospel, the Christ of God, the anointed one.  Then the apostles, and by extension each of us, are given a mission:

Listen to Him.  Interpreters do not agree on the specifics of God’s command to listen to His beloved Son.  Does listen to Him refer to the earlier prediction of his passion and death or does it refer to his teaching?  Today the command is unmistakably clear.  We know that Jesus suffered and died. That historical reality removes any ambiguity.

We are to listen to his teaching through His words and through His actions,  through meditation on scripture and through prayer.  As we listen to Jesus, as we take His teaching to heart and allow them to transform us, we move that much closer to the eschatological glory foreshadowed in the transfigured Jesus.
___________________________________
Some sloppy wet snow today.  Not as much as predicted for which we are all grateful.  Yesterday I had a chance to sit back at the desk and drink some coffee while watching photos of tertainship flash by on the screen saver.  Two years ago today we were in Sevenhill, South Australia, on the long retreat.  Some of the photos from then are below.

One of the remarkable things was the amount of rain that fell during the retreat.  Lots for Australia.  These candles were floating due to two nights of heavy rain. 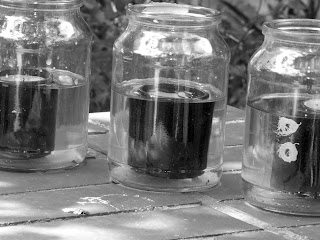 The small museum attached to the winery had this old typewriter in there.  I learned to type on its child. 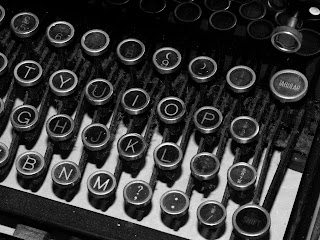 A stone engraving of the Jesuit seal in a tiny chapel on the grounds of the winery. 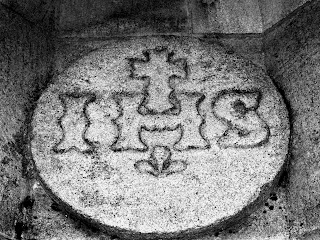 The road a few of us walked several times daily to get to the main retreat house.  Because of the rain some of the mornings were very foggy. 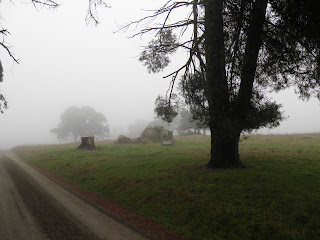 This is a meadow behind the house on the farm.  Shortly after taking this the clouds rolled in and let loose with rain. 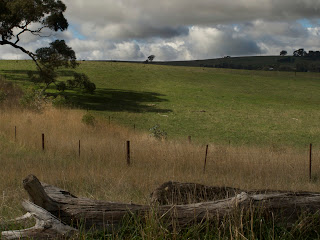 Finally, St. Aloysius Church at sunset.  The altar faced east.  During a short period of time as the sun was setting in the west the light did amazing things inside. 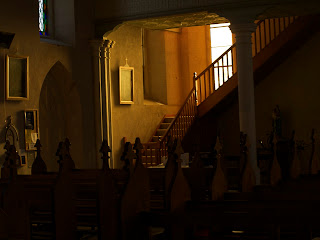 It's Been a While

The Our Father is the middle of Jesus’ teachings on three important acts of piety:  Almsgiving,  prayer,  and fasting.  The same three acts of piety that the Church encourages for all the faithful during this holy season of Lent.  As he does elsewhere Jesus begins by instructing his listeners “How Not To” before telling them “How To.”  “Do not babble like the pagans who think that they will be heard because of their many words.”

The pagan belief, one that appears to have been carried forward to the 21st century, was that God could be manipulated by a flood of words.  The more words and the more floridly they are proclaimed the more effective the prayer.   Sometimes prayers of petition degenerate into detailed scripts which we expect and demand God to follow.  Scripts and lists of desires that are unnecessary in prayer.  Torrents of words are not needed.  When Jesus says: “Your Father knows what you need before you ask him” He is citing Isaiah who wrote:  “Before they call, I will answer; while they are yet speaking, I will hear them.” Unfortunately, our familiarity with the Our Father allows us to zip through it without necessarily hearing or paying attention to it.

St. Ignatius gives the following instruction in the Spiritual Exercises under what is titled, “The Third Method of Praying.”  It reads in part, "with each breath taken in or expelled, one should pray mentally, by saying one word of the Our Father between one breath and the next.  Between each breath one reflects on the meaning of that word, on the one to whom the prayer is directed, or on one’s own lowliness."  Try doing that during this holy season. Drink deeply from each of the ten lines.  Let each of the fifty-five words soak into your soul. Your thirst will be satisfied.
______________________________________________
It has been a while since I posted mostly for reasons beyond control.  Norovirus, the virus that can destroy a cruise, hit the community.  About a dozen men got sick.  I was one of them.  The first ten or so hours were spent thinking I was going to die.  The next eight were spent wishing I had managed to do so.  The final six or so of what was a long day were spent wondering if rigor mortis was setting in.  It was not how I would have chosen to spend almost three days in bed.  Some of the men were much sicker.  I examined several of them before and after my own bout.  Through the stethescope their guts sounded like washing machines in mid-cycle.  I can't thank Ignatius enough for keeping up a supply of ginger ale when it was possible to keep something down and then, when food was possible, bringing a toasted bagel and bit of jelly.  On the other hand, just as the worst seemed to be over he phoned to ask where he and a friend could go for a burger.  The mere word 'burger' almost did me in.

Just as I recovered from noro, with the prospect of having to prepare some lectures, the blizzard hit.  That was good for twenty-eight inches of snow and some lovely photographic opportunities.

The snow piled up quickly.  The maintenance staff did a great job keeping the roads clear throughout the night. 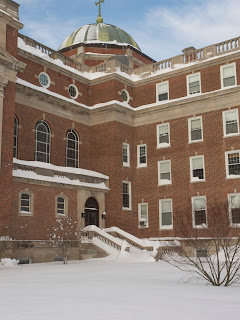 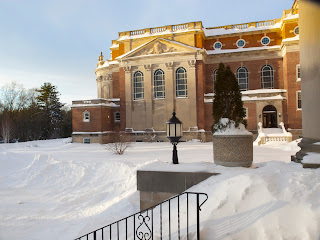 The break table out by the employee entrance gives an idea of how deep the snow was.  It is in a protected position and there was no drifting to interfere with the symmetry of the snowfall.  The little humps are the chairs surrounding the table 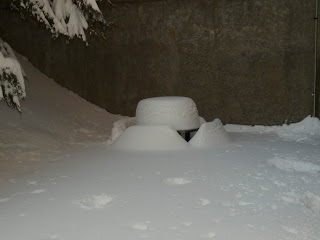 This is a lamp outside one of the external doors to the chapel.  It was much too cold and windy to stay outdoors for long. 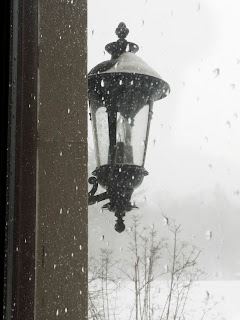 This was sunset.  I think I managed to stay out for about twenty minutes before my fingers began to hurt from the cold despite the gloves. 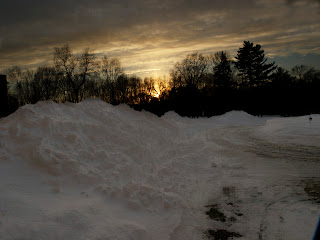 This is a black and white of a window at the back of the fourth floor library. 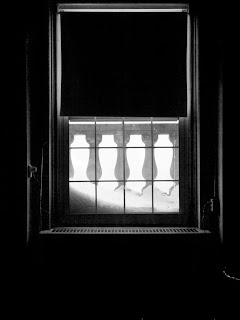 Finally, a still life of the ashes and holy water before the Ash Wednesday Mass. 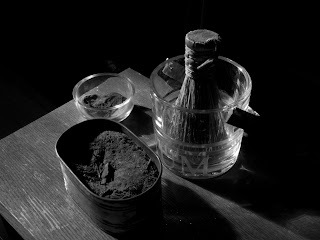