Homily for the 47thAnnual March for Life

The 47th Annual March for Life was held today in D.C.  The march began as a response to the Supreme Court's disastrous Roe vs. Wade decision that signed the death warrants for millions of children in the womb.  The decision sent American society down a slippery slope of killing the imperfect, the unplanned, the undesirable, the unwanted, and now, the inconveniently sick and elderly.

Initially, Roe vs. Wade set a three-month interval during which abortion was legal.  But, things have deteriorated. Some states have legalized late-term abortion, i.e. abortion after 20 weeks gestation up to the time the child is able to survive outside the womb.  And then some . . .

A quote from a Washington Post columnist dated 1 February 2019 is horrifying:  "This week in Virginia, Delegate Kathy Tran (D-Fairfax) admitted that, yes, her bill would allow a doctor to perform an abortion after the mother had gone into labor—a position that Democratic Virginia Gov. Ralph Northam bizarrely (and ineptly) decided to defend in a radio interview."

Governor Northam is a pediatric neurologist by training.

In the case of the ill elderly, what was euphemistically called "physician-assisted suicide" became, "physician-guided death."  In some quarters it is now being referred to as "physician prescribed death."

When did old age or terminal illness become a capital offense demanding a prescribed death?  I did not attend medical school, complete six years of residency, and do a fellowship year at MGH under two Jesuit physicians George Murray and Ned Cassem, so as to write the prescription: "Give poison to grandpa when desired."

In 1978 I spent six weeks in London as visiting registrar with Dr. Cicely Saunders, who founded St. Christopher's Hospice in 1967.   Dame Cicely was a fierce opponent of what was then called euthanasia.  She said in an interview:  "Impending death is no excuse for ending life.  Rather than rushing to kill the dying in the name of ending their suffering, we must focus on practical measures for alleviating their pain and spiritual means to make their final moments worth living."

She was quite the contrast to Lord High Executioner Jack Kevorkian who died of natural causes in a hospital bed at age 87.  Kevorkian was a pathologist. Pathologists rarely examine patients with body temperatures above that of the ambient air.  Indeed, among graduate U.S. physicians, only pathologists are not required to do an internship with living patients before beginning their training in the autopsy room and lab.

In his encyclical Evangelium VitaeJohn Paul II, condemned "therapeutic interventions--which accept life only under certain conditions and reject it when it is affected by any limitation, handicap, or illness."

Med schools share the blame. In ancient times Hippocratic physicians pronounced and lived according to the Oath of Hippocrates. The Hippocratic oath was not universally administered nor did all physicians abide by its precepts.  Today, reciting the bowdlerized oath is a trite med school graduation exercise in place so that mommy can dab at her eyes and daddy can bust his buttons.

The modern version is unrecognizable compared to the original, seeming only to be concerned with not violating HIPPA and doing nothing deemed illegal, a term that has an elastic definition to say the least.The promises to live ethically and morally, and even the promise to revere the one who taught the young physician the art of medicine, have all been deleted.Thus, a new physician no longer swears: "Into whatsoever houses I enter, . . .I will abstain from all intentional wrong-doing and harm, especially from abusing the bodies of man or woman,"

Today's young doctors do not say: "I will use treatment to help the sick . . . but never with a view to injury and wrong-doing.  Neither will I administer a poison to anybody when asked to do so, nor will I suggest such a course . . . . Similarly I will not give to a woman a pessary to cause abortion. But I will keep pure and holy both my life and my art."

The Hippocratic oath was composed between the third and fifth centuries B.C. suggesting that the sanctity of life was more respected by pagans than it is by shrill feminists or Hollywood starlets who attribute winning a Oscar to having had an abortion.

Proving John Paul's condemnation of accepting life only under certain conditions and rejecting limitation, handicap, or illness, Iceland has almost eliminated trisomy 21 or Down Syndrome from its population through intrauterine testing followed by almost mandatory abortion if positive.  Genocide would be an appropriate term.  Ten years ago pediatric geneticist Dr. Brian Skotoko of Boston Children's observed that "An estimated 92 percent of all women who receive a prenatal diagnosis of Down syndrome choose to terminate their pregnancies."

John Paul pointed out in his encyclical:  "A danger today is the tendency to disguise certain crimes against life in its early or final stages by using innocuous medical terms which distract attention from the fact that what is involved is the right to life of an actual human person."  The term physician prescribed death is a sterling example of semantic manipulation. Killing the sick elderly is a much more accurate description.  Abortion is a more accurate term than the pastel-tinted soft-light suffused euphemism "Women's Health."

Unfortunately, there will be a 48th Annual March for Life.  There will probably be a 49th and 50th as well.  The need for witness will be even more desperate over the coming years as the value of frail human life remains under assault.

We pray in thanksgiving for those who marched the streets of D.C. today, particularly the legions of young people who traveled from all over the country.

We pray for the victims of unnatural executions, the Holy Innocents of today.  Can we atone for the hidden collateral damage to families? The cost is much higher than anyone realizes or is willing to admit.

We pray for the conversion of heart of the abortionists, and those who would execute the sick elderly.  We pray for their collaborators who administer the anesthesia, prep the patient, and assure the woman that she is doing the right thing.

_______________________________
Have become a bit las about posting.  Long winter and not always feeling great.  And on the road.  Was in Vermont last week for some of the coldest weather of the weekend.   The cold was mitigated by the opportunity to do some "frost  photography" and some other topics.  With temps as low as 0 it was not a time to wander through the snow shooting.  Neither the camera nor the owner's body were in the mood.

The windows that were partially protected from the wind frosted over beautifully.  Those facing the wind were solid ice.  Not too much too shoot.

A frost geyser.  This is where computer processing revealed itself.  The black and white below is the same photo manipulated ( as was the first) to bring out the contrast.  Each says something a bit different. 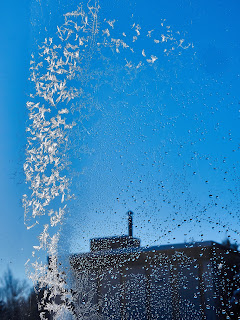 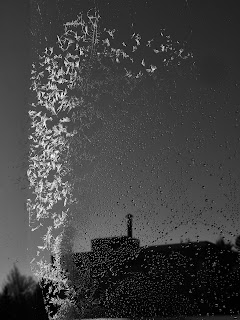 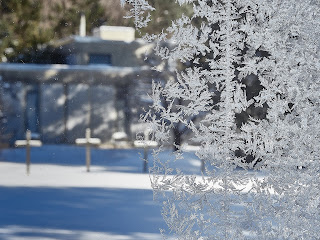 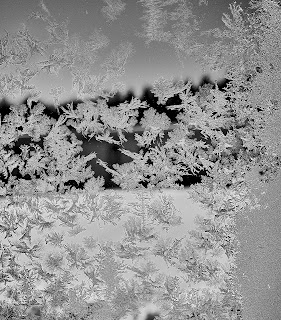 Similarly abstract.  The delicate tracery of the frost is fascinating. 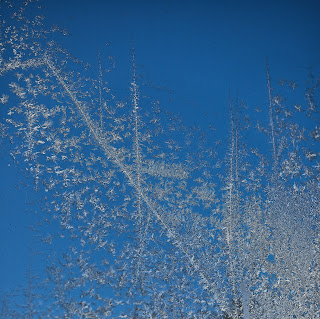 Lots of processing to get this effect. 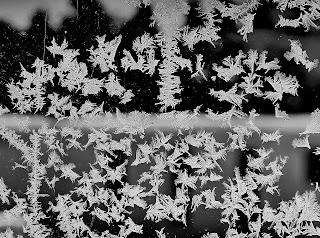 This shot is amazing in that it was hand-held for two seconds.  Olympus has some very powerful image stabilization that allows hand-held shots at shutter speeds undreamed of using film and no tripod. 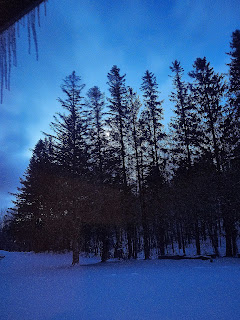 Love birch trees, even when just remaining as stumps. 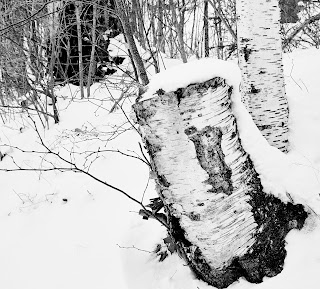