A Facebook Retreat in Daily Life With the O Antiphons.

I am posting this on both the blog and facebook.  I recently had to join fb so as to keep in touch with the English Language Mass group in LJ.  Might as well use it for something productive.

The "O Antiphons" are ancient chants dating from before the 6th century.  They introduce and close the Magnificat at the office of vespers beginning on December 17 and concluding on December 23.  The seven exquisite images of the coming Messiah are the basis for the Advent hymn, "O Come, O Come Emmanuel."  Many point out that the Latin antiphons form an acrostic.  If they are arranged as a column and one reads the first letter after the O from the bottom up the message is: ERO CRAS, Latin that means, "Tomorrow I will come."   There is no universal agreement on this theory among academics and, I suspect, no small amount of trees were sacrificed to argue the point. Be that as it may, the O Antiphons represent one of those oftentimes unnoticed and underappreciated celebrations that add savor to our liturgical life.  Whether chanted using the ancient formal Gregorian chant or said alone in one's room the antiphons bring an extra element of joy that reminds us of the nearness of the Great Feast of the Nativity of the Lord.

Over the next seven days beginning tomorrow I will post each antiphon in Latin and English. Each post will include a photo, a short reflection or meditation, a musical 'lagniappe' and a closing prayer.   May these posts provide a few moments of rest, contemplation, prayer, sanity, or relaxation, pretty much the definition of a retreat, during what can be a chaotic time of year. 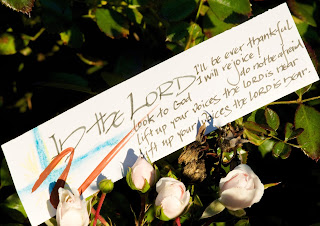 Photo:  The calligraphy was done by Fr. David, an Australian religious priest, who made the long retreat at Sevenhill, SA with our tertian class. He is a talented artist who made eighteen markers, one for each of the men in the retreat.  We used them to chant the hymn at Mass.  After Mass I propped it up in a rosebush where it was illuminated by the setting sun.

Meditation: At the beginning of the Spiritual Exercises, Ignatius instructs retreatants to stand at the foot of the cross and contemplate the strange fact that the King of the World is hanging on that cross.  He then tells the retreatant to ask himself three questions.

In these last days of Advent when the Lord is near, we must ask ourselves three additional  questions:

Lagniappe: "In the Lord I'll be Ever Thankful."  Taizé (See photo.)
https://www.youtube.com/watch?v=uAx8gjQrsOY  (copy and paste in browser to hear)

My soul proclaims the greatness of the Lord,
my spirit rejoices in God my savior;
for he has looked with favor on his lowly servant.
From this day all generations shall call me blessed:
the Almighty has done great things for me,
and holy is his Name.
He has mercy on those who fear him
in every generation.
He has shown the strength of his arms,
he has scattered the proud in their conceit.
He has cast down the mighty from their thrones,
and has lifted up the lowly.
He has filled the hungry with good things,
and the rich he has sent away empty.
He has come to the help of his servant Israel,
for he has remembered his promise of mercy,
The promise he made to our fathers,


to Abraham and his children forever.
Posted by Fr Jack SJ MD at 5:52 AM