Every year in Advent, the gospel proclaimed on the second and third Sundays recalls the message of John the Baptist, the prophet who was Jesus’ herald, the voice crying out in the desert, the friend who described himself as unworthy to carry Jesus’ sandals.  John was a kinsman of Jesus but the degree and nature of that kinship is unclear.  We learn of that kinship between John and Jesus only in Luke's magnificent first chapter when the angel soothes Mary's concern by telling her, "And behold, Elizabeth, your relative, has also conceived a son in her old age, and this is the sixth month for her who was called barren."  That son was John.

Who was this herald, this prophet, this voice crying in the desert?  In paintings, movies, and the occasional strange novel, John the Baptist is sometimes portrayed as either a drugged out hippie or a wild-eyed lunatic, who was dressed in animal skins and ate a diet that most people would consider disgusting.  But, John’s way of dressing was the same as that of any other man who lived in the desert.  The animal skins were necessary for warmth during cold desert nights.  His diet had nothing to do with radical vegetarianism. Rather, he had to maintain ritual dietary purity. In contemporary terms he had to keep 'kosher.' In the end, his dress and diet are irrelevant. His message, however, is as important today as it was when he proclaimed it in ancient Judea.  We have written testimony about John from several sources.  The first source is all four Gospels, what Biblical scholars call 'multiple attestation.'  John is also mentioned in the Antiquities of Josephus.

“Produce good fruit as evidence of your repentance.  And do not presume to say to yourselves, ‘We have Abraham as our father.’”  The mandate in this short sentence was later elaborated upon in the Letter of James.  “Be doers of the word not hearers only; What good is it if someone says he has faith but does not have works?  Simply saying “we have Abraham as our father” is not a get-out-of-jail-free card.  It does not excuse wrong action.  Loudly proclaiming that one has faith in Jesus without living out the demands of that faith, does not excuse sin. John's message was uncompromising.  It was the opposite of one of the saddest words used in the U.S. today:  "Whatever."  John's message is not a 'whatever.' John's message is 'this is the sure path you must follow, this is the one you must follow.' In time that message cost him his life.

As Paul wrote in the second reading, “What was written previously was written for our instruction, that by endurance and by the encouragement of the Scriptures we might have hope. . . . Welcome one another, then, as Christ welcomed you, for the glory of God.”  If we are able to live out those sentences we would help bring about the peace prophesied by Isaiah in the first reading.

We face many choices in Advent.  The important choices do not include what do I buy my sister for Christmas, should I send a card to the Johnsons, or where can I find the biggest flat screen TV? The choices are how to live out our faith.  How to live that faith in an attitude of repentance and conversion of heart, and to say with the psalmist:

“May his name be blessed forever;
as long as the sun his name shall remain.
In him shall all the tribes of the earth be blessed;
all the nations shall proclaim his happiness.” 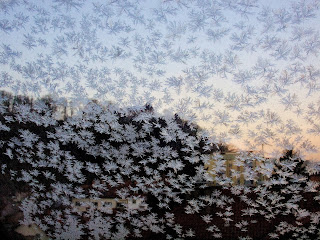 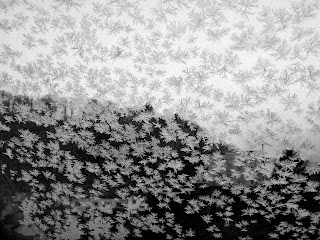 The pastor took me for a long walk on Saturday AM after breakfast.  Ravne is an old town with a lot of new construction.  The abandoned house/castle is from the old but the apartment buildings to the right of it are from the 1960s. 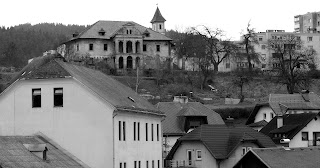 The house planted the theme song from The Munster's in my brain.  Couldn't get rid of the ear worm for a while.  Some things demand black and white photography, a form I like. 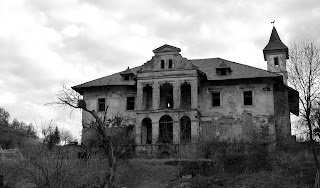 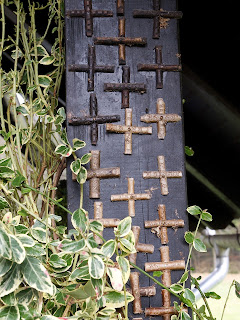 The parishioner's have a small flock of sheep.  Two new lambs posed nicely. 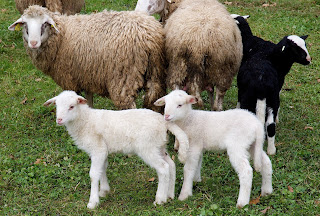 The next three were on the return to the church.  The pond is partially frozen.  It was a bracing walk. 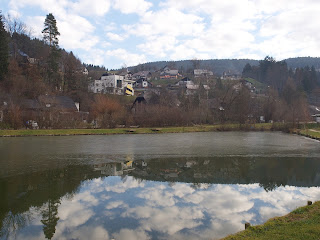 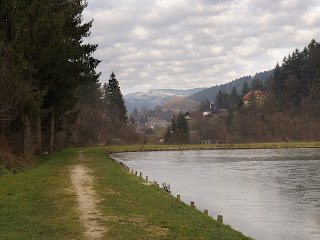 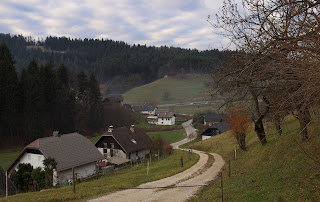 There was a pig butchering going on at grandfather's house.  Chose not to include those photos here.  They are a tad gory but fascinating.  These grapes were still on the vine in front of the house. 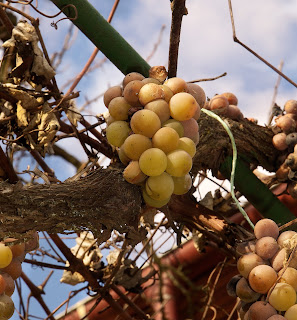