A verse from today's first reading figures in one of the world's great musical offerings.  Johannes Brahms' German Requiem is a magnificent composition.  It is composed of verses from both the Old and New Testaments in much the same was as Handel's Messiah.  Unlike the Latin Requiem Mass that prays for the dead, in sometimes terrifying imagery, such as the Dies Irae of Verdi's Requiem, the Brahms, is addressed to us, the living.  It is addressed to those who must go on after the death of a loved one.  It comforts us and it instructs us. The requiem begins with the beatitude “Blessed are they who mourn, for they shall be comforted.”   Sometimes that comfort is a long time in coming as we struggle with the pain of separation, as we try to make sense of that which does not make sense, as we ask “Why? ”and hear only silence in reply.

The third section of the Requiem begins with Psalm 39:3-4, and ends with a splendid fugue for chorus taken from Wisdom 3:1, found in today's reading.

“The souls of the just
are in the hands of God
and no torment
shall touch them.”

What greater comfort can there be for us, the living, than the assurance that the souls of those whom we love are in the hands of God? How great a comfort is it to know that they are no longer subject to the torments of this world?  Because the writer of Wisdom is certain that the souls of the just are in the hands of God we hear later in the Requiem one of its most spectacular passages when the full force of the large chorus asks in wave after wave of sound:

For this reason we can sing with the psalmist,

"When the just cry out, the Lord hears them,
and from all their distress he rescues them.
The Lord is close to the brokenhearted;
and those who are crushed in spirit he saves."
________________________________________________
The past two weeks have been chaotic. There was a death in the community, multiple trips to the hospital with several of the men, visits to those who were admitted, and then last Tuesday, a drive to D.C. to drop off one of the men and his belonging as he takes up a new assignment in D.C.

After leaving D.C. I headed up to my sister's house in Wilmington, DE where I left the car in the driveway and flew to Florida. On Tuesday of last week I addressed the Collier County Alzheimer's Association, one of the model programs for Alzheimer's care in the U.S., on the topic: Three Ethical Dilemmas in Alzheimer's Disease: Early Diagnosis, Treatment and Driving. I've spoken there before so this was a bit of a reunion, though it was a delayed reunion as I was originally scheduled to speak in February of 2012. However, cardiac surgery and the need to move to Boston made it impossible.

The weather was spectacular.  I now understand why people move to Florida.  However, I also know what the summers are like.  I'll stay in the north thank you.

I intentionally did not take the camera to Florida so as to be undistracted while making a short retreat with the Passionists in West Palm Beach (spectacular retreat house) and mulling over a few things.  Then there was the weight issue on the plane.  Trying to limit myself to carry-on and a briefcase I wanted to keep things light.  It worked.

While in Florida I had a chance to catch up with a med school classmate who lives in Palm Beach Gardens and then stayed with another, who invited me to speak, in Naples.

However, in keeping with the general theme of water, some photos from the recent cruise of Boston Harbor.  It is inexpensive and I highly recommend it.  After the cruise my guests wanted to stop at the aquarium gift shop.  The camera got quite a workout. 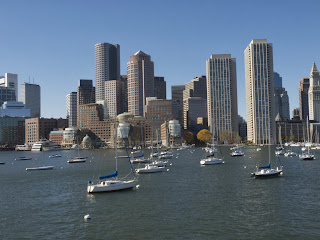 First, the views from the water.  The Boston skyline is very nice.  The absolute best view of Boston is found in the winter along the MIT side of the Charles River.  Splendid.   But this was OK too.  I don't think the cruise goes out during the night or I would take it.

Old Ironsides remains a commissioned Navy vessel.  It maintains that commission by being sailed one nautical mile every year on 4 July.  Because Jerry is 6'3" we chose not to disembark and tour the vessel.  Sailors were shorter in the past. 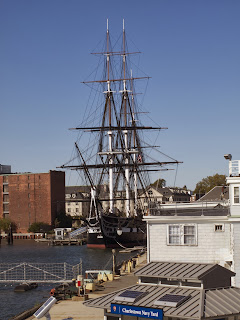 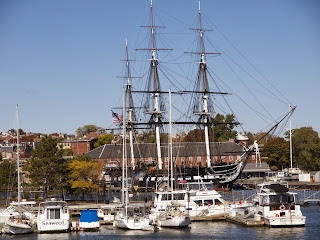 There was also a more contemporary ship available to tour. 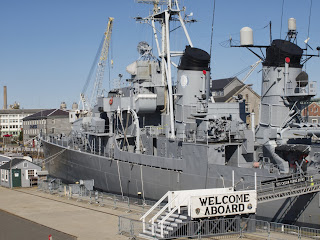 Now, what I've been waiting to post.  Tchotchke Heaven.  It is amazing what people will buy when on vacation.  The gift shop at the aquarium was tremendous.  Taking photos of stuff like this is a lot of fun.
First, a blown glass jelly fish tree ornament (I guess). 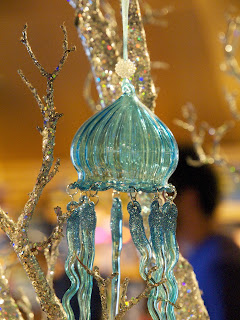 Multi-colored candle holders or shot glasses or something.  Not sure I would drink single malt out of something this colorful. 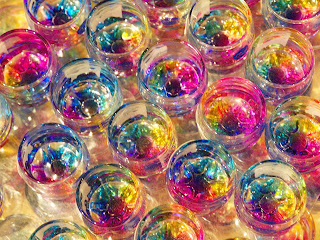 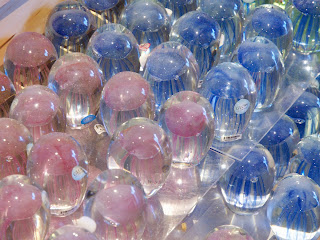 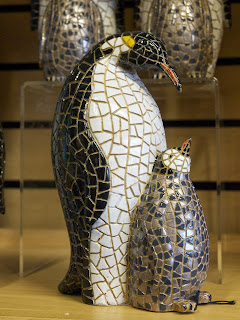 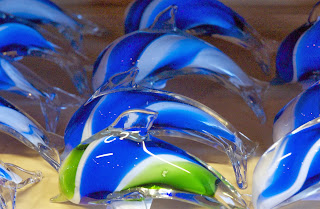 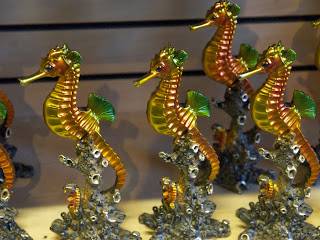 Swimming turtles.  This is reminiscent of something one might find during the Dance of the Hours in Disney's absolutely brilliant Fantasia.  The rhinos dancing in tutus never fails to crack me up. 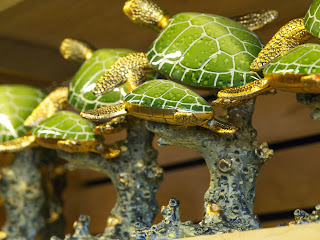 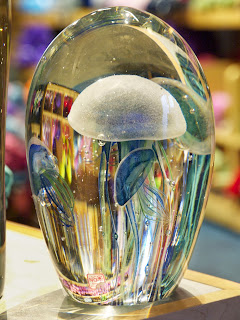