Feast of Christ the King

The Feast of Christ the King is a relatively new one.  It was added to the Church calendar by Pope Pius XI in 1925, a mere ninety-one years ago. The Feast was originally set for the last Sunday in October, It was moved to the 34th and last Sunday of the Church year in 1969.  Next Sunday, first Sunday of Advent, we begin a new liturgical year.  It is significant that this feast  is placed in such a high profile position, a kind of liturgical New Year's Eve.  While the first and second readings are marked by images of kings, the Gospel requires some thought to fit into this feast.

The first reading details how the tribes of Israel anointed David as their king.  He was named king because of his ability to rally the Israelites and conquer their enemies.  As we heard in the reading, "it was you who led the Israelites out and brought them back."

The kingly images in the psalm are more subtle.  However we hear of the strength of Jerusalem, the royal city in which stood the thrones of judgment of the house of David.

The second reading from Paul’s letter to the Colossians appears in the Liturgy of the Hours.  It is a song of praise and gratitude to God for placing us in the Kingdom of his beloved Son. The Son who, through his obedience to the will of the Father,  redeemed us from our sins.

Then we come to Luke’s Gospel.  What kind of King is Luke describing?  A king who is mocked by the criminal crucified next to him?  The King of the Jews  as on the sign Pilate wrote INRI: Iesus Nazarenus Rex Iudaeorum?   A king hanging naked in front of a crowd?  A king undergoing the most shameful form of execution possible?  What King is this?  What kind of King is this?

This good king isn’t sitting on a throne. This good king isn't surrounded by a court of hangers-on. This good king is down in the dirt and dust with the rest of the people in their struggles.  The good king is shoveling mud after a disaster, not standing around in a starched shirt and white construction helmet waiting for his photo to be taken. He isn't playing golf during times of crisis.

This King is Jesus who tells each of us, “Whoever wishes to join me must be willing to labor with me.”  At times that labor is neither pleasant nor easy.  While it is said “His yoke is easy and His burden is light”  it doesn't always seem that way.

In the second meditation Ignatius instructs the individual to meditate on the choice that confronts all who call themselves followers of Christ.  Under which of two standards under which of two symbols or flags, is one going to choose to live and die, the standard of Christ or the standard of Satan? Do we choose Satan and the world or do we choose Christ and the Kingdom of God?  The banner of the evil king of the world or the banner of the Eternal King of the Universe?

St. Ignatius did not create anything unique with these two meditations.  Throughout the coming liturgical year Jesus will present us with the same choice many times over, in different ways.  Do we follow Jesus, the Eternal King, or do we not?  Just as we make resolutions at the end of the old calendar year on New Year’s Eve, today, on the Feast of Christ the King, the final Sunday of the Church year and the cusp of a new one, we have the opportunity to choose.  We can choose either to live and perish under the false values of this world of materialism, sensuality, and the culture of death, or to live and die under the banner of Jesus. The King who died to redeem us from sin and despair.

Spent part of the weekend on the Slovenian coast in Piran, a very old city overlooking the Adriatic.  There is a fishing industry there, apparently for sardines.  Saturday was very rainy.  The rain was a gift because I was able to get some photos that would have been impossible with tourists clogging the plaza.  I took over 500 shots.  They will be appearing here for a while.  These are just a few from the three photo outings, one in the rain upon arrival, one at night after the rain stopped, and one early this AM before returning to LJ.
_____________________________________________________
Two bicycles in front of a house.  Streets are impossibly narrow here.  And cobblestoned.  I don't think any woman in Piran owns high heels. 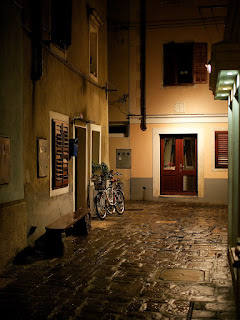 Fishing boats looking toward the plaza.  The tower and white building just to the right are quite high overlooking the city. 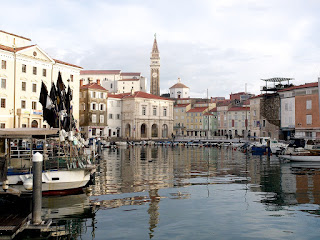 Walking along the coast at sunrise this AM. 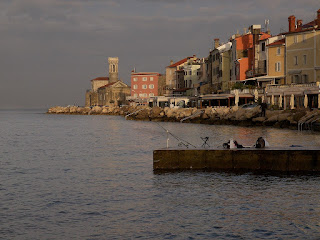 I love silhouettes and fog.  Together they are unbeatable.  A church along the Adriatic. 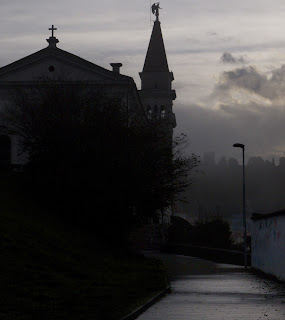 Copper door on a home.  The texture is wonderful.  Br. Robert  and I had quite a discussion about the role of texture in architecture on the way up.  Br. Robert is a very talented architect who was attending a conference and asked if I wanted to go along. 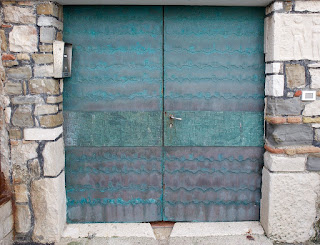 Fisherman on his boat on Sunday AM. 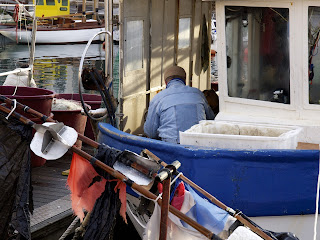 Speaking of texture.  Shutters on a house. 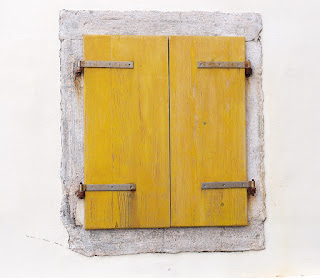 Six umbrellas, two backpacks and a balloon.  This is why the rain was such a gift yesterday. 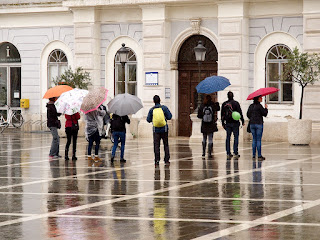 Another typical street.  I do not need a stress test this year (as if I would have one!).  No chest pain while walking up and down these hills?  NO problem. 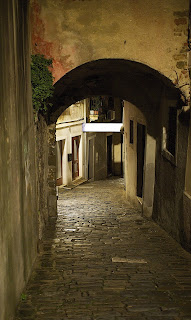