When preaching on these readings it is tempting to focus solely on the story of Thomas, or Doubting Thomas as he is colloquially known, so as to engage in the popular indoor sport of Apostle Bashing (a very intense competition in theology schools).  But to do that would miss the deeper meaning of these readings and their interrelationship.

Today’s readings are not about doubt.  The readings are about faith.  Faith is not the polar opposite of doubt. Mature faith must always contend with a degree of doubt, sometimes more and sometimes not so much.  But faith, as it matures, must contend with doubt throughout life.

The first reading describes the earliest coming together of the Church in the first gatherings of the faithful.  “They devoted themselves to the teaching of the apostles and to the communal life, to the breaking of bread and to the prayers.”  That is precisely what we are doing here and now,  communally hearing the words of the Gospel and reciting prayers as we prepare for the Eucharistic Banquet at which we will receive the True Body and Blood of our Lord.  Note the description of that earliest congregation,  “They ate their meals with exultation and sincerity of heart, praising God.”  We are to imitate them in that.

The second reading shines a bit of light on the Gospel:  “Although you have not seen him you love him.  Even though you do not see him now yet believe in him you rejoice with an indescribable and glorious joy.”  Peter’s letter describes a joy that is the same as that described in the first reading, a joy that is nourished by participation in this our Eucharistic feast.

It is reasonable to suspect that in the period between the apostles telling him that Jesus had appeared to them and the appearance detailed in today's gospel, Thomas, despite not having seen him with the rest of the apostles, continued to love the Jesus with whom he had cast his lot so long ago. As is true of the love we maintain for a deceased parent or friend, Thomas' love for Jesus did not die on the cross.

Periodically we must ask ourselves, what is faith?

The definition of faith in the Letter to the Hebrews is unsurpassed, “Now faith is the conviction of things not seen.”  In his Letter to the Romans Paul reminds us that,  “Faith comes from what is heard and what is heard comes by the preaching of Jesus Christ.”  That preaching of Jesus Christ does not come to us in the oral form it did at the Sermon on the Mount or in the many parables Jesus related to the apostles and others who followed him.  Jesus’ preaching comes to us in scripture and in the tradition of the Church. The first two readings are important because they tells us what it means to be a Church, what it means to be a people of faith, and what we can expect.  The gospel tells us something a bit different though complementary

A superficial reading of the Gospel's portrayal of Thomas supplies us with a tempting target.  Indeed it is too easy a target as Thomas becomes someone against whom we can compare ourselves in a self-righteous manner.  He can be used to compare, and condemn, others whose faith we do not feel is adequate.  Calling someone 'a doubting Thomas' is generally not a compliment. This comparison too is generally done from the position of self-righteousness.

At the end of the Gospel Jesus asks a question and gives a blessing, “Have you believed because you have seen me?  Blessed are those who have not seen and yet believe.”  It is worth pondering  in relation to ourselves.

Neither John’s Gospel nor the synoptic gospels were meant to be albums with verbal snapshots of detailed scenes from Jesus' life.   The gospels are not a log book that trace Jesus' daily movements--there is no "Star Date" affixed to them.  The gospels are not a diary of Jesus’ day-to-day thoughts and they definitely are not history in the modern understanding of the word. Any attempt to read the gospels through the lens of modern historical convention is doomed to failure and perhaps high comedy.  We can never interpret the gospels in the light of the modern concepts of history, journalism, and science without frustration and faithlessness.  The less said about novels such as The da Vinci Code the better.

The last sentence of this Gospel passage puts the nature of the Gospels into perspective:  “Now, Jesus did many other signs in the presence of his disciples that are not written in this book.  But these are written that you may come to believe that Jesus is the Christ, the Son of God, and that through this belief you may have life in His name.”

The Gospel proclaims one essential truth, that Jesus of Nazareth, of whom it speaks, is the Lord.  Thus, the fullness of Easter joy is contained in Thomas’ faith-filled, startled, and ultimately joyous proclamation:  "My Lord and My God."  It is why we too can gaze upon the True Body and Blood of Christ at the consecration in a few minutes and say with Thomas and all the Church, “My Lord and My God.”

"Give thanks to the Lord,
for he is good,
his love is everlasting."

A very busy week that included a one day trip up near Krško (Slovenian wastes little time with vowels).  Left house at 6 AM and returned at 8 PM, ninety minute train ride each way.  Few other meetings and Masses.   On Easter Sunday I was asked to take photos of an annual service commemorating the earthquake of 1895.  The Archbishop of Ljubljana presided.  On Monday night there was an ecumenical communion service with the Greek Catholic priest and deacon with a number of Eastern Rite, Orthodox, and Roman Catholics in attendance.  I was asked to take photos.  Took lots.  And lots.

I discovered a terrific perspective on Easter Sunday: behind and under the altar.  The altar at sv. Jožef is supported by twenty marble columns.  Under and behind the altar offers a great view with a natural frame of the altar, celebrants, and congregation.  Getting those photos requires assuming a position that I would never allow anyone to photograph.  Also a degree of concentration and thought when trying to get out of it.

The chalice and bread prepared for the communion service. 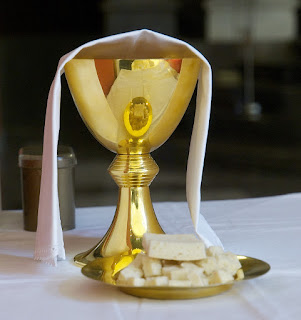 The deacon beforehand.  He is checking out his chanting (the epistle).  Very nice guy who speaks good English.  Will be ordained to the priesthood in September. 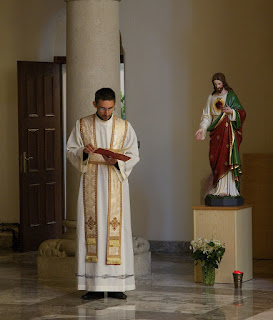 The choir.  A choir of Slovenian men chanting a capella is glorious.  It was the first time I regretted that I don't do video with sound recording.  They were rehearsing here. 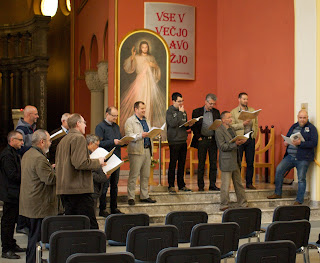 The next three were taken during the service.  The priest on the left is Fr. Tomaž P (of our community there are two of them, M and P) who put together the service.  Unlike the Roman church where the deacon is behind the priest the deacon's place seems to be to the left of the altar. 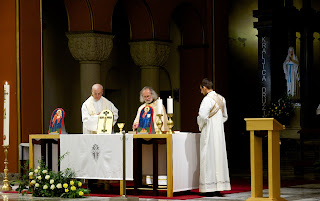 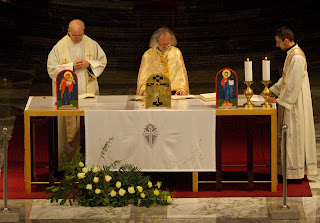 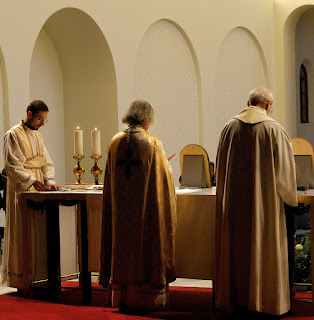 From the back of the church looking toward the altar.  The arches echo from the front door all the way to the back.  I hope to get a shot through the open front door as the main entrance is a dramatic arch. 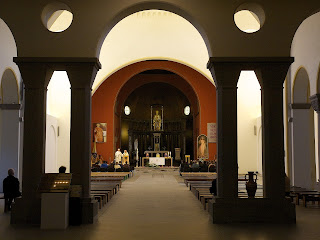 Here it is.  Under and behind the altar.  I would like to shoot this some day with no one at the altar so I can use a tripod and a time exposure. 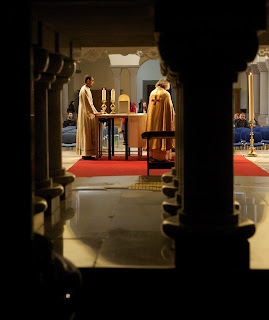 In contortionist mode to get this one. 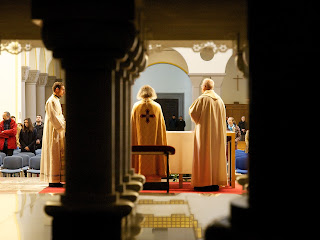