Have not been doing any preaching here.  Celebrated Mass in English daily for the campers but given the varying levels of understanding I kept the homilies short and easy to understand.  Returned from the mountains yesterday.  What a difference being back at sea level, particularly in terms of breathing and walking at the same time.

Rose early this morning and went walking in LJ from about 6:00 to 7:30.  LJ on a Sunday morning is very quiet and almost empty.  There was some activity as staff prepared to open the cafes for the day etc.  But there were no tourists on the streets that early.  A great blessing.

Went out with a long telephoto lens, the equivalent of 80 to 300 mm.  That forces me into a different type of photography.  Did a lot of wide angle shooting in the mountains.  The lens today forced me to concentrate more on detail.  Happy with the result.

Hiša Gradom is a cafe with indoor and outdoor seating near the community.  It is on the route I generally use to go into the center.  Desserts are much better than Valiums. 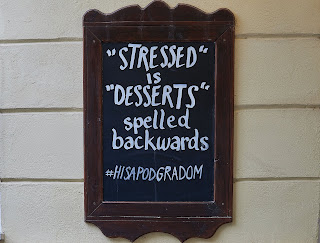 I've had coffee here several times, generally sitting outdoors, even in the winter. 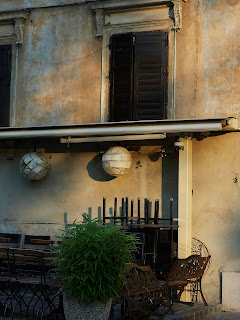 The dome and one of the spires of the Cathedral of St. Nicholas.  Needed several attempts to get this due to the odd angle at which I had to hold myself to line it up with the silhouette. 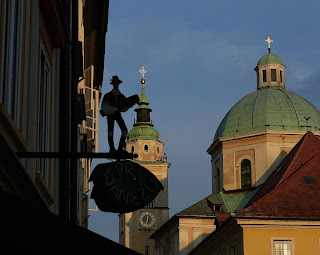 Klobosarna is a small restaurant/take-out that specializes in klobasa (kielbasa for some one who great up in Northeastern PA).  Good food.  Love the oversized ring used for advertising. 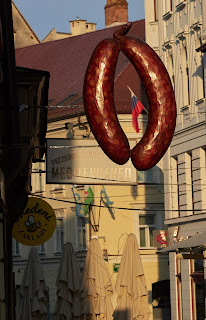 Many would agree that the sun rises and sets on klobasa. 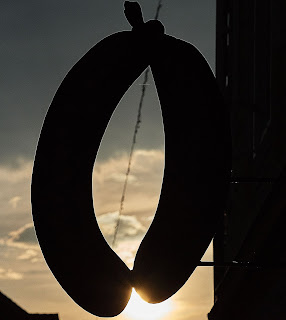 These are artificial flowers on the shelf of a souvenir shop. 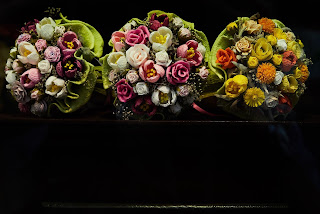 A photo of a reflection from the back window of an SUV. 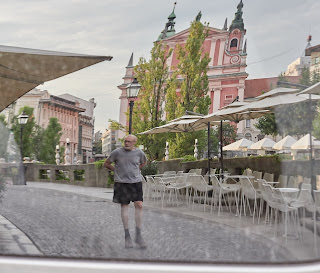 These supply the lighting at a sidewalk cafe.  I've not been able to get shots at night because it gets dark around the time I am heading to bed and the city is very crowded with tourists.  These hang over the tables in one of the many restaurants along the river. 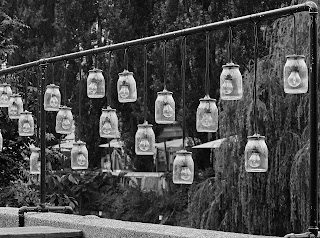 An arcade.  The only reason this photo was possible was the early hour.  Very heavily trafficked part of town.  Would be impossible during the mid-morning. 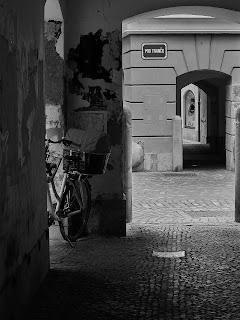 Slovenian flags for sale in a gift shop. 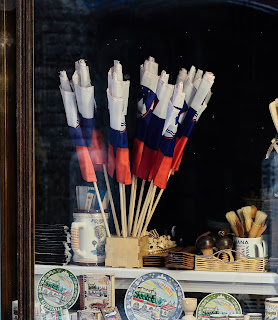 There is quite a bit of woodcarving done here.  This bear is about the size of a medium adult. 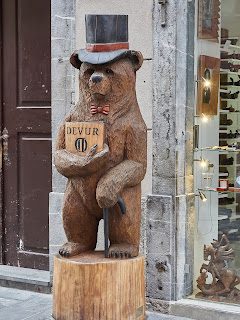 The colors of this costume jewelry attracted me. 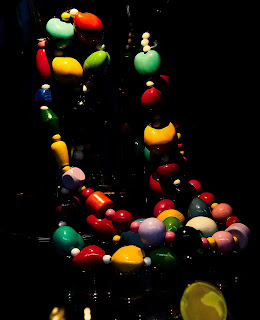 It took a moment to figure out.  And then I giggled. 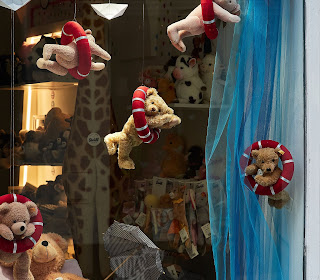 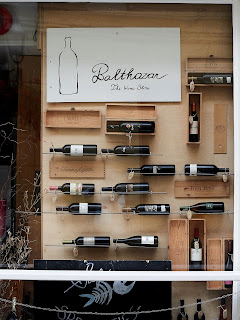 A black and white shot of one of the typically narrow streets.  Many homes go without air conditioning.  Love the open windows. 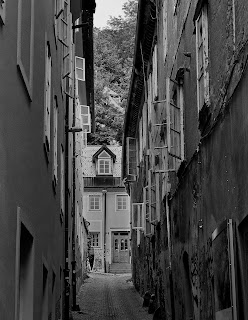 Took a photo similar to this last year.  I can't recall if the umbrellas are the same.  I do remember that the umbrellas were polka dotted then. 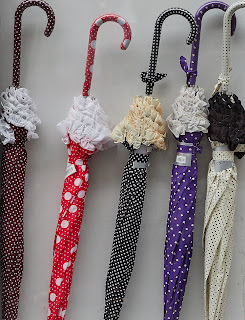 A men's necktie display.  How does one tie a crooked tie?  See lower left. 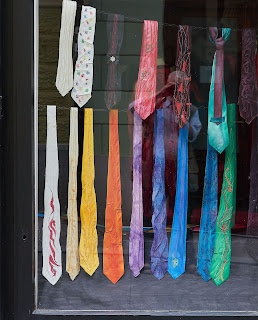 Church steeple of the other Jesuit church in town and an outdoor chandelier. 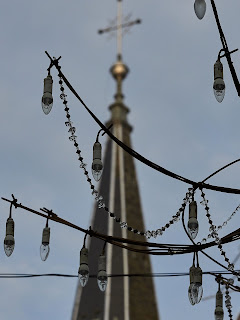 Flowers hang from practically every window 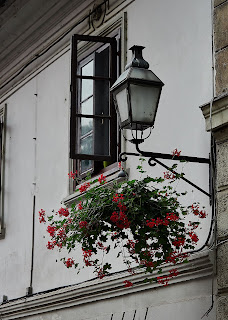 A madonna and child in a niche built into a home. 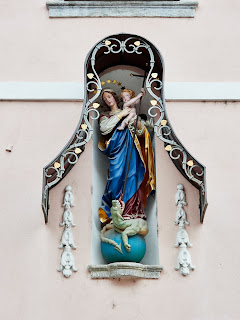 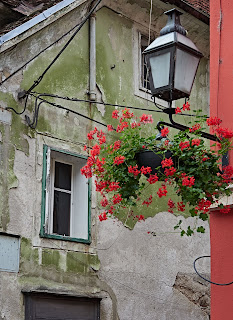 The church juxtaposed with the chimneys 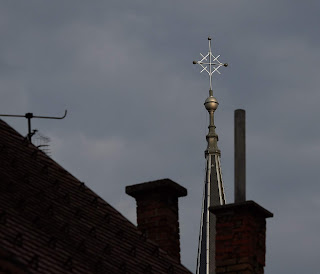 Walking along the street and the bright blue vases caught my eye. 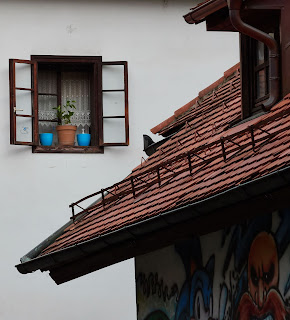 Flower boxes in the windows and an insanely ugly satellite dish. 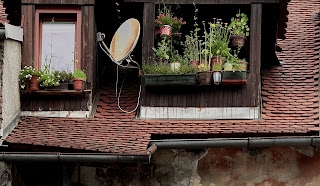 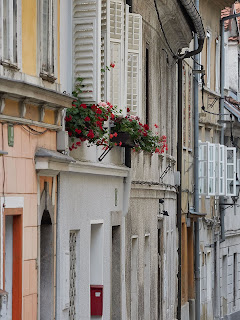 Reflections in the Ljubljanica river 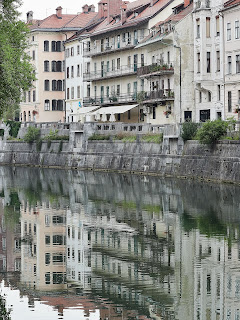 A guy sitting along the river.  Some photos demand being converted to black and white.  This is one of them. 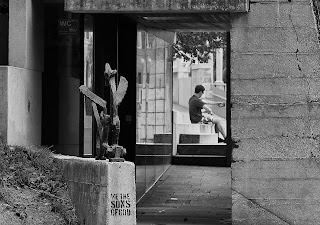 Sending back the empties for refills. 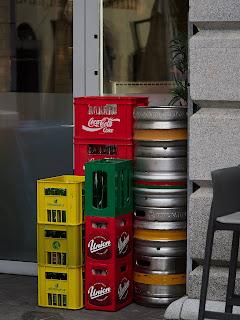 Table and chairs in a just-opening restaurant. 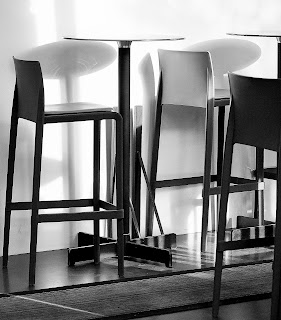 Bikes in a niche in an apartment building. 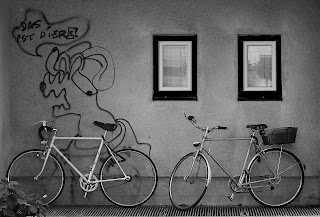 Back to Boston on Wednesday 1 August.