Today's gospel narrative is subtitled "Teaching on Humility."   It is unique to Luke's Gospel.  The first reading from Sirach resembles a teaching on humility that could have been lifted directly from the rule for a religious order.  St. Benedict defined twelve steps of humility across three chapters of the Rule. The first sentence of Chapter Seven of the Rule quotes today's Gospel as an introduction to those steps: "Scriptures cry out to us and say: 'Every one who exalts himself will be humbled, and every one who humbles himself will be exalted.'”  The advice in all three sources is sound and worthy of meditation.

Humility is an interesting virtue and a misunderstood one. It is one we can try to fake.  Sometimes we are successful in those efforts. However, as easy as it is to fake it is difficult to live, particularly in this day of relentless self-promotion and ubiquitous selfies--this last being one of the ugliest neologisms in English, in its sound, its execution, and its implications.

Temptations to glory, fame, and being renown for great deeds dogged Ignatius of Loyola throughout his life.  The early pages of his autobiography are fascinating and revealing.  Much of the rest of the autobiography reveals how he fought against those temptations.  Jesus' caution against self-exaltation is well-known even to many who are unaware that it comes from scripture. The banquet image is an excellent illustration of the danger of excessively high self-regard, a danger that is at epidemic levels in U.S. society today.

While arrogating a place of honor without being asked is a blatant example of excessive self-regard, there are times when egotism  may be mistaken for humility.  True humility is not persistent self-abasement. It does, however, demand honestly admitting one's mistakes and trying to correct them. True humility does not mean deflecting or denying compliments. It means accepting them with modest gratitude and then moving on to more pressing matters.

Compliments are an interesting phenomenon.  We learn a lot about ourselves and others by observing how we, or they, respond to them.  A compliment is an expression of regard from the speaker to the recipient of the compliment. A compliment is a verbal gift from one to another.  It is a manifestation of affection.

"That dress looks very good on you."

"You mean this old rag?  You need to see your eye doctor."

"That is a beautiful painting."

"Oh, a twelve year-old could have done as well.  Better in fact."

This kind of response is not humility.  It may seem so on the surface.  But, in reality, this kind of compliment deflection is an example of pride wearing a badly applied mask of humility. The compliment deflection is meant to encourage more reassurance and praise, ideally accompanied by a cascade of words.  "Oh no, you are soooooooo wrong. That painting is exceptionally well done.  The composition, the color, the brushstrokes . . . .'

Responding to a compliment or reacting to praise with fake humility is an attempt to manipulate others into piling on even more accolades, a few superlatives, and lots of adverbs.  More significantly, it is a rejection of the other, of the one giving the gift, on par with refusing a proffered handshake.  There is only one possible response to a compliment:  A slight smile, perhaps a nod, and  words to the effect, "Thank you, it is kind of you to say so."

The opposite of humility is hubris, an ancient Greek word defined as: extreme pride, especially pride and ambition so great that they offend the gods and lead to one's downfall. It was hubris, rather than hunger, a desire to chomp on an apple, or the need to increase dietary fiber intake, that led to Adam and Eve being exiled from the garden. Indeed, it took very little persuasion for Satan to ignite their pride and ambition with disastrous results.  It is pride that drives one to assume a prime seat at a banquet without having been asked to take it.  Pride is the driving force behind many of the sins we commit on a regular basis.

The distinct Carthusian Rite for the Mass uses different wording for some of the prayers of the Roman Rite.  Their admission of sin, their version of the confiteor,is stripped down and simple.  It begins: "I confess that I have sinned through pride . . . "   There is no mea culpa, mea culpa, mea maxima culpa. There is just a simple admission of pride. Pride is perhaps the most lethal of all sins and the driver behind many other sins.

As I was applying to the Society, about a year before I entered, George B. Murray, SJ, MD, a psychiatrist at Mass General who was my fellowship director, among other facets of our relationship, sent me a letter I've kept with my passport and other important papers for twenty-three years.  George's description of humility is an important corrective to the humility that fishes for more praise.  He wrote: "The only thing you need in novitiate is a true vocation and humility. Humility is not kow-towing, proclaiming yer' lowness, and taking self-abasement.  Humility is based on truth, ergo the real. . . if you erred admit it to yourself (you don't have to advertise it). If you did good admit it to yourself (you don't have to advertise it)."  He dropped me off at the novitiate on August 24,1997, twenty-two years ago last week, and vested me as a priest ten years later.  Six years after that I celebrated his funeral Mass.  A brilliant man, his definition of humility determined how he lived his extraordinarily accomplished life.

True humility is realizing our pride, admitting it to ourselves, and then acting against it (agere contra) without making that contrary action obvious or making a big deal out of it.
True humility is to follow Jesus' advice, "Take my yoke upon you,and learn from me." 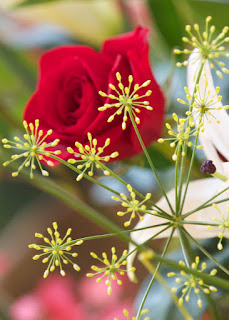 One of my very few successful efforts at capturing fauna in nature.  Butterflies hear me coming and they are flitting all over. 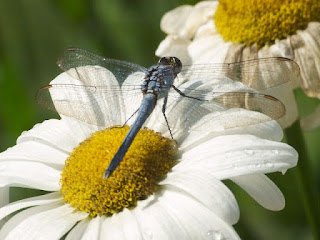 Gorgeous colors playing off each other. 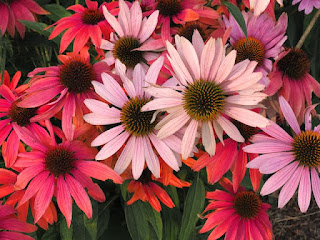 Small mums in a planter. 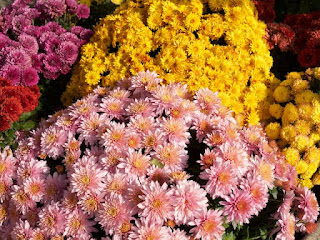 Yeah, shooting raindrops on roses is trite.  It is.  I do it all the time. 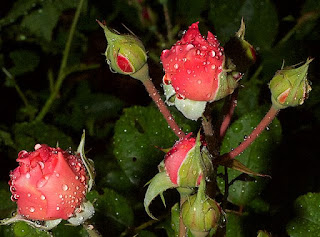