Homily for the 6th Sunday of Easter

Acts is Church History 101. The first reading today continues to describe the rapid growth and spread of the Church in its first years. Two weeks ago we heard, "It was at Antioch that they were first called Christians."

Several days ago we heard Gamaliel's analysis to enemies of the Church regarding how to respond to the Apostles' proclamation of the Good News of Jesus, risen from the dead for our sins.  That analysis still holds.  He said, "So now I tell you, have nothing to do with these men, and let them go.  For if this endeavor is of human origin, it will destroy itself.  But if it comes from God, you will not be able to destroy them; you may even find yourselves fighting against God.”

"But if it comes from God, you will not be able to destroy it."

Despite the attempts of many throughout the centuries--and in many places today--to destroy the Church, it continues because, and only because, of the Church's provenance from God. The growth of the Church during the time of Philip, Peter and John was astonishing.  The persistence of the Church proves that it is of God.

We heard in the First Letter of Peter, "Always be ready to give an explanation to anyone who asks you for a reason for your hope, but do it with gentleness and reverence, keeping your conscience clear, so that, when you are maligned, those who defame your good conduct in Christ may themselves be put to shame."
That the Church heeds this advice became evident in Boston in May 2014 when a student group at Harvard planned a public "Black Mass," a reenactment of satanic rituals meant to mock the Catholic Church and its sacred liturgy.  (NOTE:  put 'black mass harvard may 2014' into browser for further information.  I got 82 million hits).

One can only take pride in the response of the Boston Catholic Church and its community  to the blasphemous actions at Harvard as well as its response to the pathetic defense of those who wished to sponsor or approve of the sacrilege. This includes the Boston Globe.   The Globe published a letter by a Miss Sarah Wuncsh, staff attorney for the Massachusetts ACLU coven, who criticized Harvard's president for ultimately censoring the abomination, using the tired free speech argument, which, at least on the internet is applied only selectively.

Were Catholic students at Harvard to have parodied or, God-forbid even criticized, any number of sexual perversions being pushed today, heads would have rolled, apologies would have been demanded, and at least a few critics would have been put in the newly resurrected stocks on Cambridge Common.

The Church's response included a holy hour of adoration at St. Paul's Church in Harvard Square.  It was attended by over 1000. It was not the only holy hour in town.  Other churches and several Jesuit communities had similar periods of prayer and reparation for  Harvard's hideous, disrespectful, biased, and, if I may coin a word, religiophobic behavior.

Sacrilege was countered by prayer.

Adoration was the response to blasphemy.

The desire of Harvard to stage a sacrilegious anti-Catholic ceremony is not entirely surprising.  It, and similar actions throughout the world, represent  the fear of the revelation of the Spirit that Jesus promised in the Gospel. As Jesuit Father Stanley Marrow wrote in his commentary on this particular Gospel passage, the world cannot receive the Spirit of truth because it cannot tolerate the revelation.  The revelation calls the world's values into question, inverts its hierarchies, and overturns its cherished idols.  Apparently this is a real problem at Harvard.

The Gospel includes parentheses framing the message:  At the beginning: "If you love me, you will keep my commandments . . ." At the end:  "Whoever has my commandments and observes them is the one who loves me."  Obedience to his commandments is the only available means we have of manifesting our love for Jesus.  Nothing else can or will do.  Only by obeying his commandments can we manifest to the world that we live in Christ and he dwells in us.

As the abominable behavior of the Harvard students six years ago illustrates, we live in troubled and troubling times.  We can only understand and respond to those times, including this time of quarantine and suffering, if we do so in the light of the Christ's birth, passion, death, resurrection, and ascension.

The flowers at BC has been terrific.  The cool temps kept them in bloom a lot longer than years when the spring is balmy.  Four years ago the temps were hitting the 90s in April.  nothing lasted to the end of May.

Outside the living room window.  Open window.  Lean out.  Shoot. 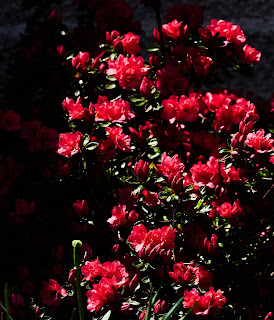 Abstract from a window in St. Mary's Hall distorting the reflected tulips 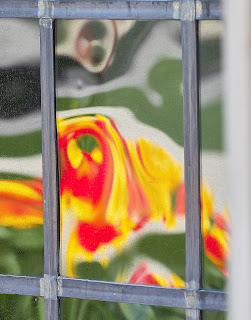 Peach tree blossoms in front yard of our satellite house. 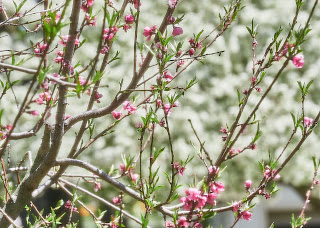 The tree across the street. 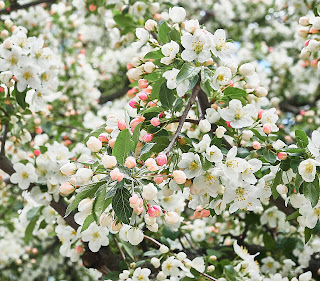 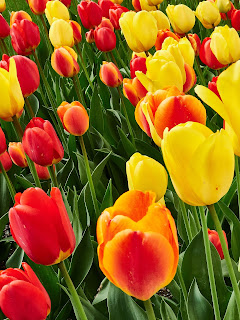 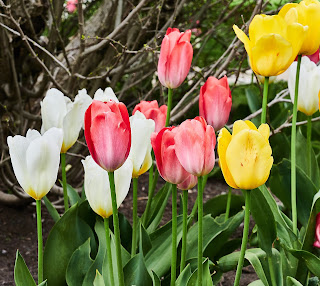 The dogwood and the Gasson tower are at least 150 yards apart.  Shooting at the end of the telephoto range for a 40-150 compresses everything and makes it appear as if I were standing under the tree shooting up. 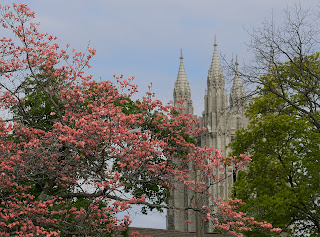 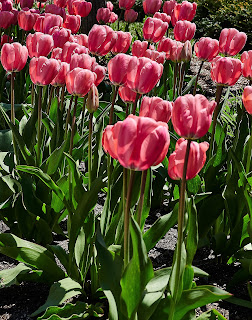 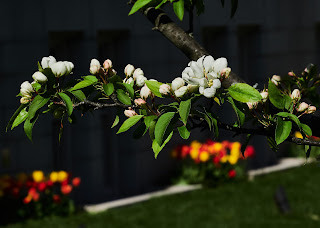