“To anyone who has, more will be given, and from the one who has not, even what he seems to have will be taken away."  This is not the only time we hear these sentiments in the Gospel.   The recurrence of this thought suggests that we must pay attention to what Jesus is saying.

On the surface these words sound like the antithesis of a preferential option for the poor.  In general wealth begets greater wealth and poverty begets worse poverty.  However, while Jesus sometimes uses financial images, here He is referring not to shekels but to faith.

Just as wealth begets more wealth, active faith, faith that drives one’s life, multiplies itself to greater faith. But, just as the wealthy investor must work hard to generate more wealth, occasionally taking significant risks, faith only increases when it is used and put to the test, particularly when that test is not of our own choosing.

Putting the light of faith under a basket obscures it from others and, more significantly, obscures it from oneself.  Can anyone afford to be a Catholic of convenience?  Should anyone allow the light of faith to shine only when it is acceptable to others, or politically correct. Should one's faith be hidden when it might be challenged?  Or if it might potentially offend someone?  Is it true faith when one is diffident about morality, ethics or naming sin for what it is because the cocktail conversation crowd wouldn't approve?

It is nice getting back to celebrating Mass regularly.  Am on various schedules today through Wednesday and then on Sunday.

The first role of film I ever with my first camera was black and white.  It is a wonderful medium in that it affects the eye and the soul in a different way than color.  It is less distracting, allowing one to focus on the shape, light and shadow rather than color.  These are the result of a fantastic Saturday morning when I went over to Vieux Lyon at about 6:30  and wandered for four hours at which point tourists began to clog the streets.

The Eglise Saint-Georges was about 1/4 mile from the community.  It is the only church in Lyon in which the Mass is celebrated exclusively in the extraordinary form.  I went there often as I could not make Mass in the community because of school. 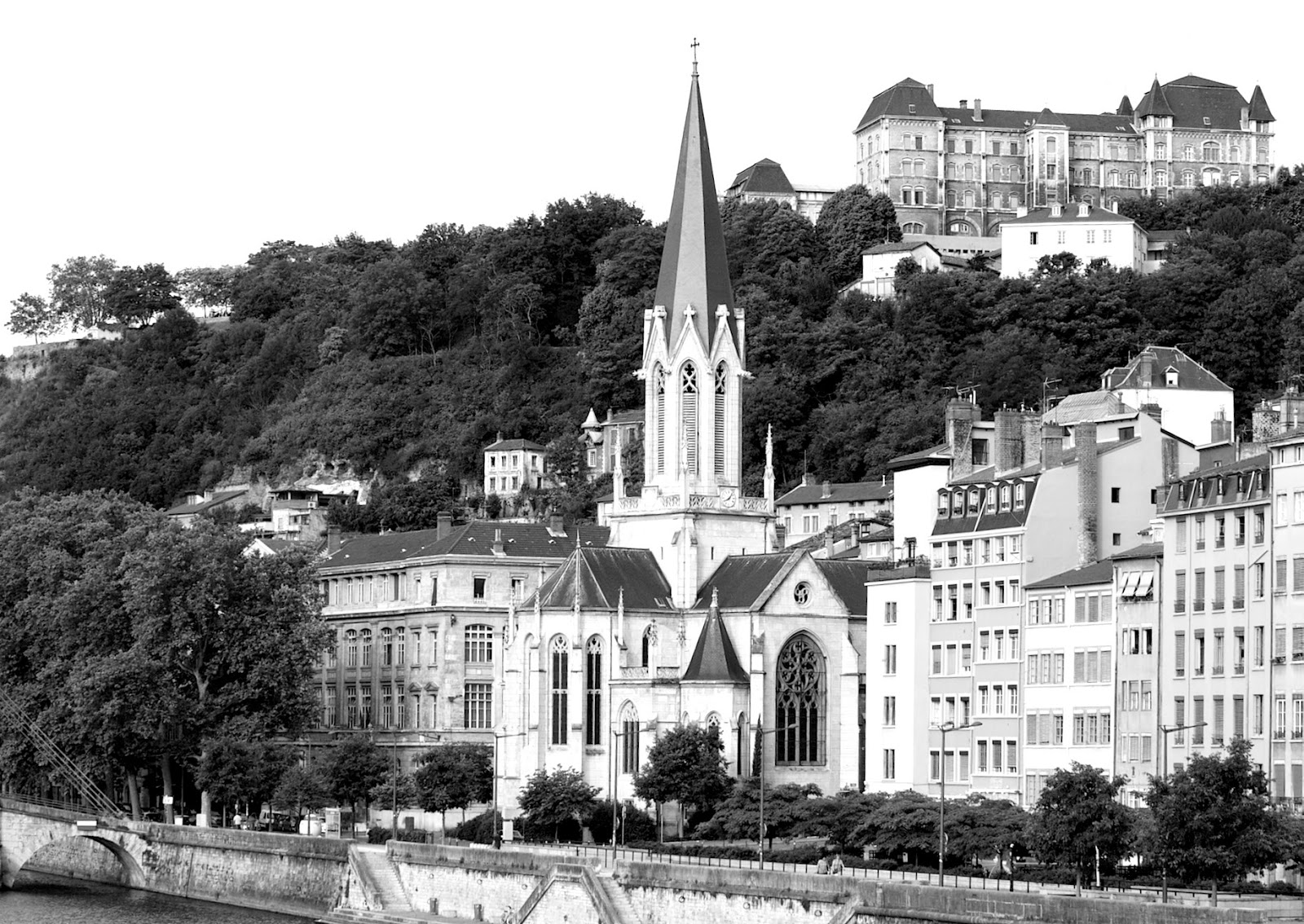 The Basilica ND de Fourviere looms over the city to the west.  It can be reached via a short walk from Saint-Georges and a funiculaire, a cable car that ascends the very steep mountain. 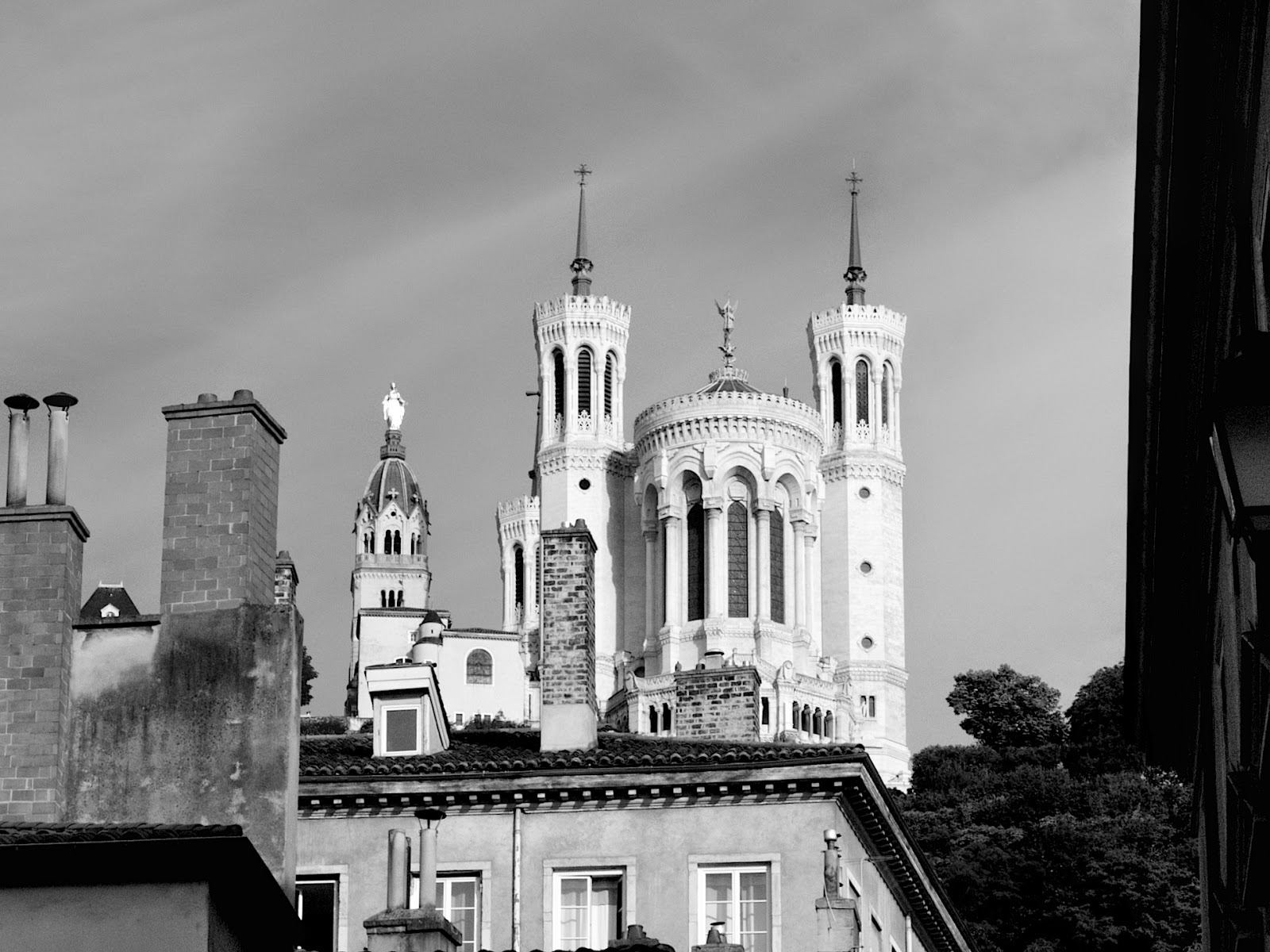 The Cathedral Saint-Jean-Baptiste is almost directly below ND de Fourviere and about 1/4 mile from Saint Georges.  It wasn't as if there were no options for Mass any day of the week. 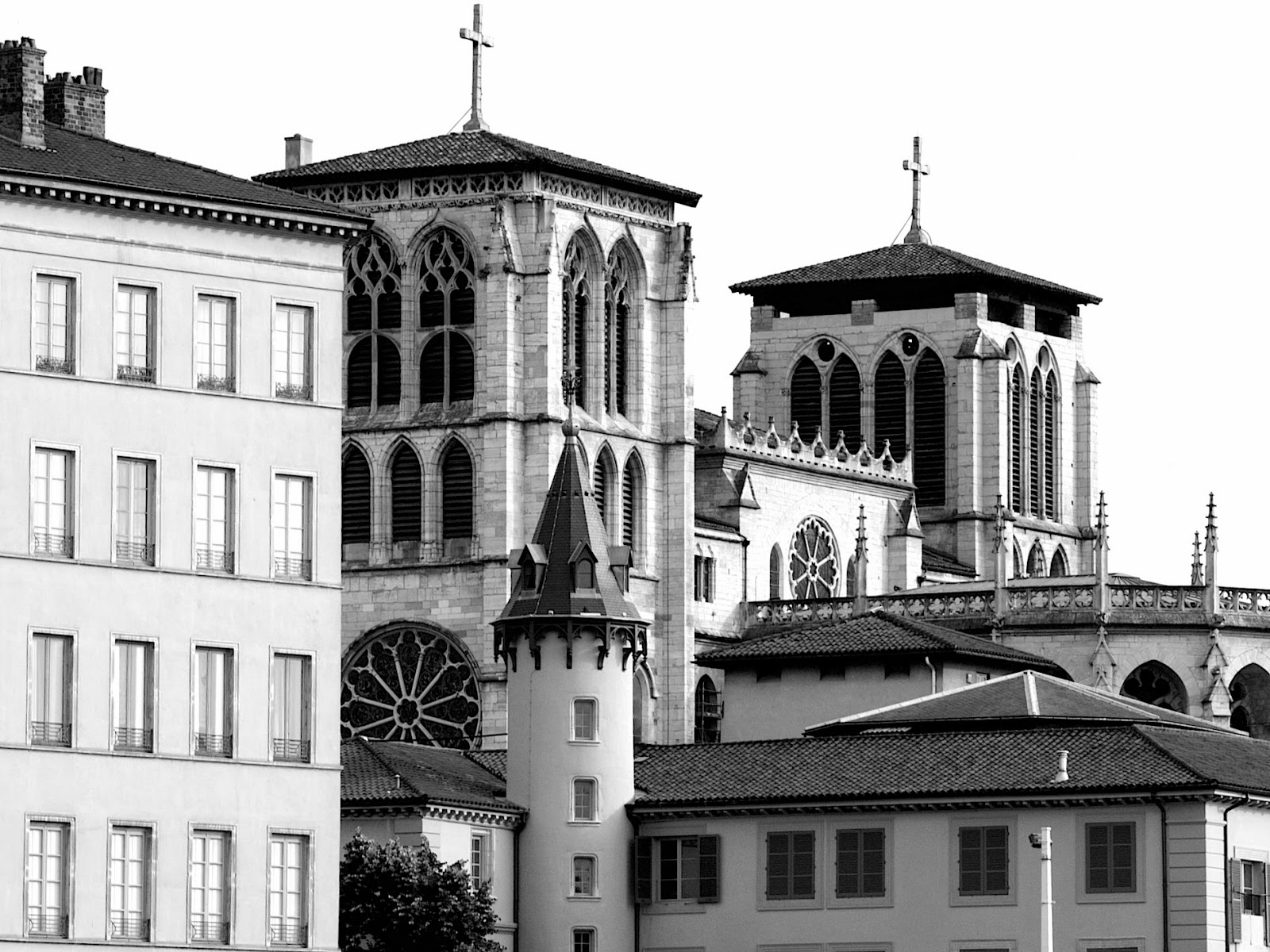 The court building is very close to the Cathedral overlooking the River Saone. 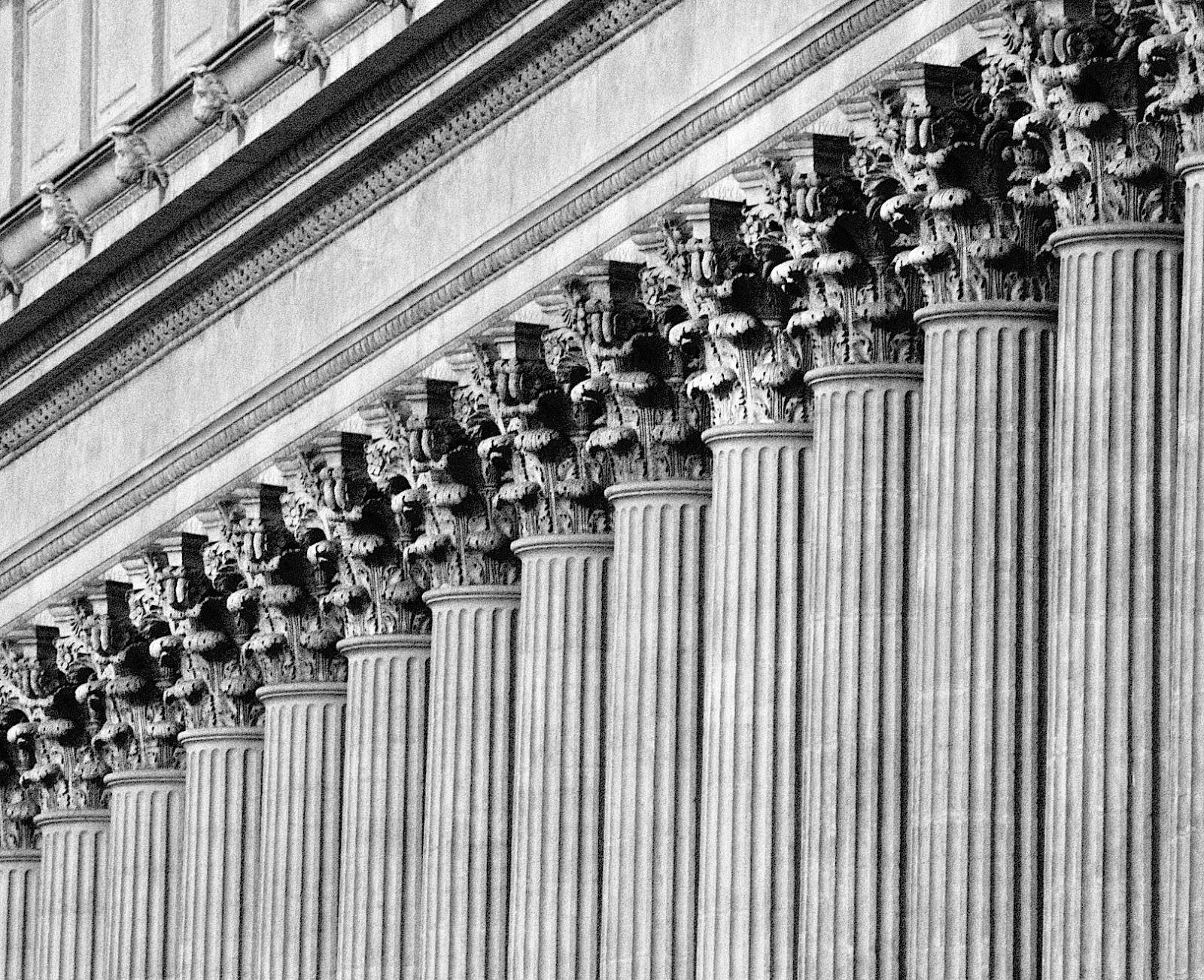 These balconies were catching the early morning sun. 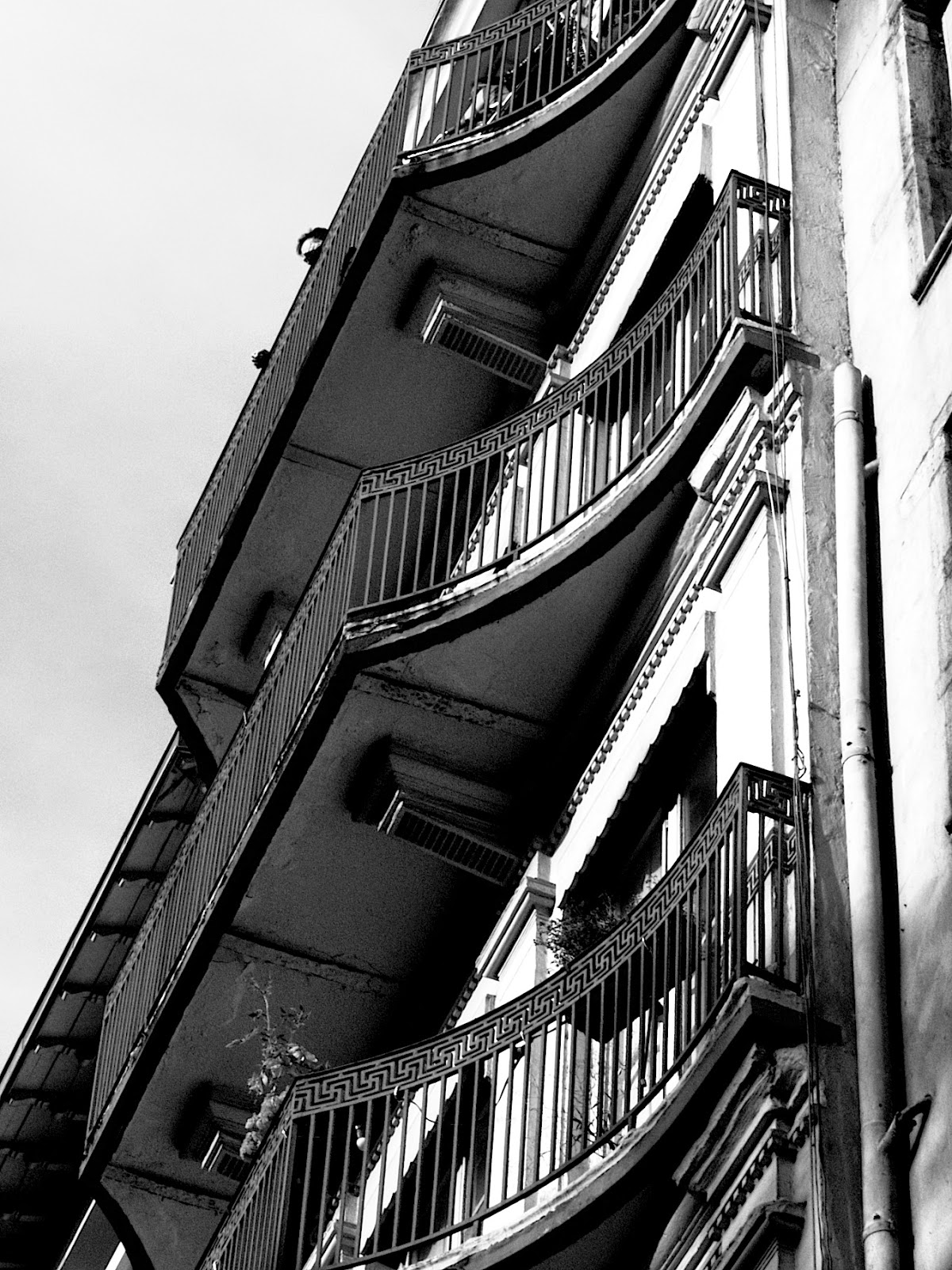 I was fascinated by the facade of this apartment building.  Each of the five floors had as different take on the windows. 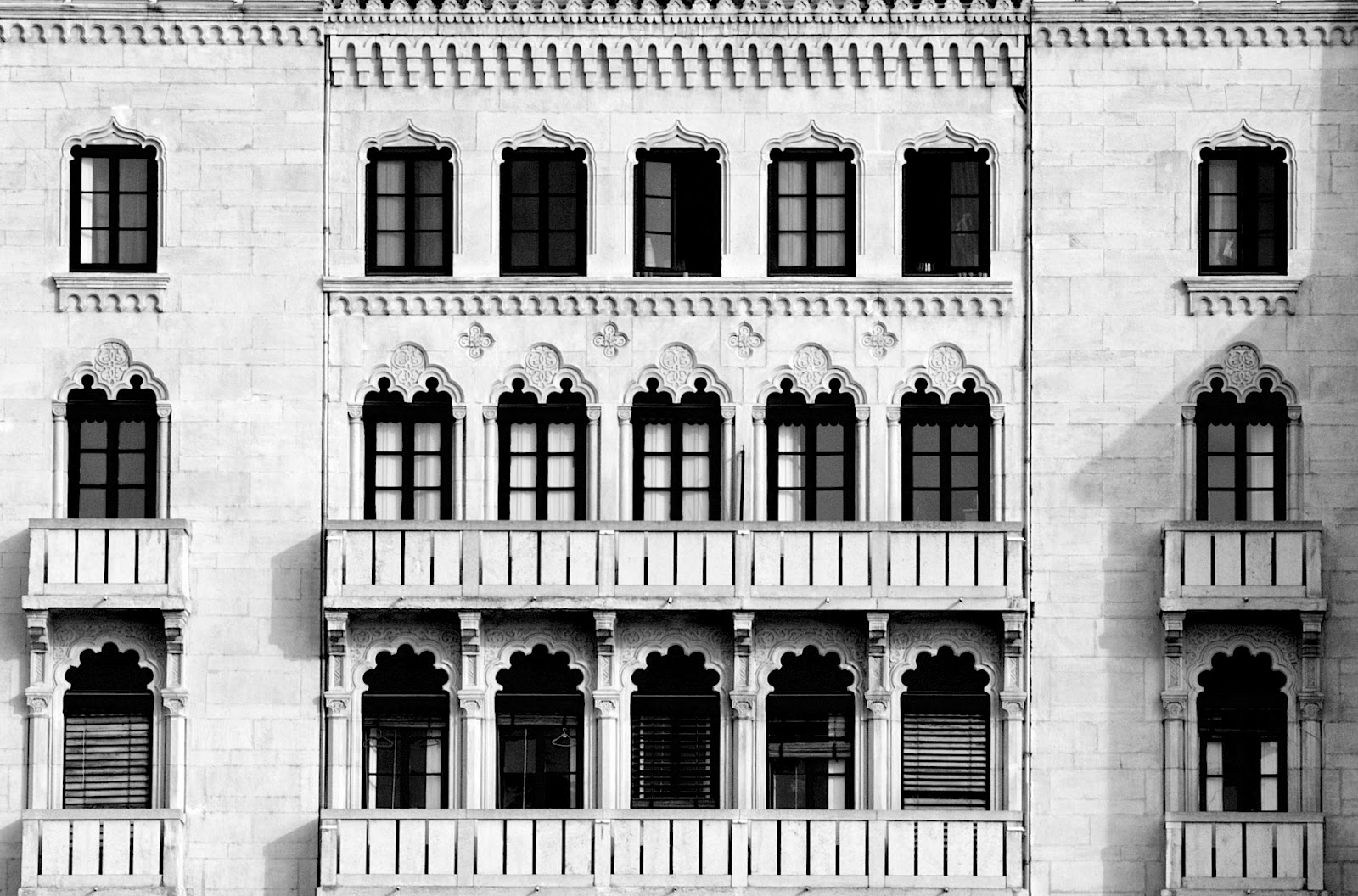