Today’s Gospel describing Jesus calling his disciples is particularly appropriate for the memorial of St. Peter Claver, a man who lived as a disciple of Jesus until his last breath.

Claver was born in Catalonia, Spain in 1580.  Almost nothing is known of his younger years save for the fact that at age 13 he had already decided he wanted to be a priest.  Three years later he began to study at the University of Barcelona where he met the Jesuits for the first time. He entered the Society of Jesus in August 1602 and pronounced first vows two years later.

Peter Claver’s spiritual director while he was in philosophy studies was Alphonsus Rodriguez.  It was Alphonsus who, in response to Claver’s desire to do great things for God, suggested that he consider going to the New World where there was much to be  done. Claver arrived in Cartagena, Colombia in the summer of 1610 after a six-month long sea voyage.  He went directly to Bogota to complete his theological studies. He was ordained a priest in 1616 at the age of 36.

It is an understatement to describe Claver’s work over the next 35 years as extraordinary.  He ministered to what one historian described as “the world’s most unfortunate creatures.”  They were men and women brought to Cartagena from Africa to be sold as slaves.  As soon as a slave ship arrived in port he greeted and boarded it along with several interpreters.  He gave those on deck whatever biscuits and fruit he could beg from the townspeople and then descended below the deck to minister to the sick and dying.  Despite the stench which sent the crew scurrying within minutes, Peter remained beneath the deck for as long as it took for him to care for the sick and baptize the dying.  He instructed the slaves in the Catholic faith and baptized them.  As his biographer notes, “These baptisms were so numerous that shortly before his death and in response to a Jesuit brother’s question about the number he had performed in Cartagena, Peter humbly answered, “a little over 300,000.”

He never left Cartagena.  He never took a vacation.  For thirty-five years, before he was felled by disease himself, resulting in four years as a bed-bound invalid, Peter Claver ministered to the most deprived, neglected, and ill-treated in the world.  He died on September 8, 1654, was beatified in 1851 and was canonized on January 15, 1888, on the same day as his spiritual director St. Alphonsus Rodriguez.  Like Peter, James and John, Peter Claver heard the call to give up everything and follow Jesus. That he did so is cause for rejoicing.
____________________________________________________________________
The homily is a bit late as the feast was on 9 September.  There was a bit of jet lag, a potentially serious problem with getting photographs off the external drive that was just resolved this morning, and much else to be done.  I will write more about the experience in Chad in time.  It was intense and, as noted earlier, sometimes emotionally battering.  Need to work on the photos a bit as well.

Dublin was easier.  Arrived there on my birthday but was so tired after the packing and grueling trip from N'Djamena that the celebratory Guinness had to wait until the following day when Paul, a friend since one hour after becoming a freshman at Penn State, arrived at the Jesuit house where he stayed for five days.  The game was great.  I didn't realize I could  still jump as high as I did after the game-winning field goal went through.  Did not take the camera as I did not want to be burdened with it.

The weather was a bit chancy.  Not a lot of sun.  There are a few things I would have liked to have photographed but more light was necessary, as in sunlight.  But, that is Dublin.

Beginning with disembarking at Dublin Airport the festivities surrounding the Penn State game were obvious with balloons and banners.  The theme carried throughout the city.  Approximately 23,000 Penn State fans attended the game.  It was nuts!  These are some of the decorations in town in the Temple Bar area.  Not sure the artist did a very good job of making the football player look like a lion. 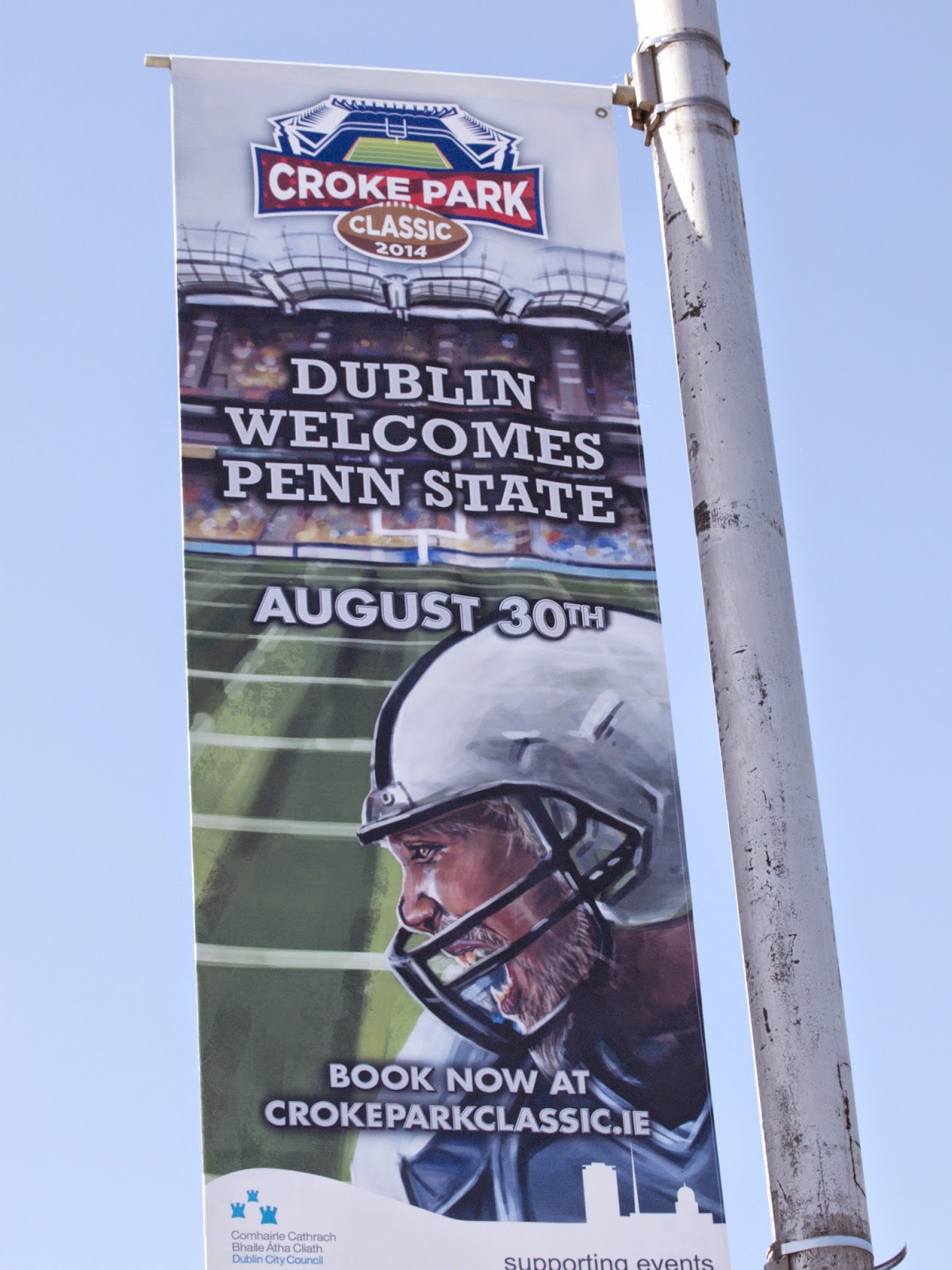 Wish I had the guts to climb up and take this down.  Would have made a lovely room decoration. 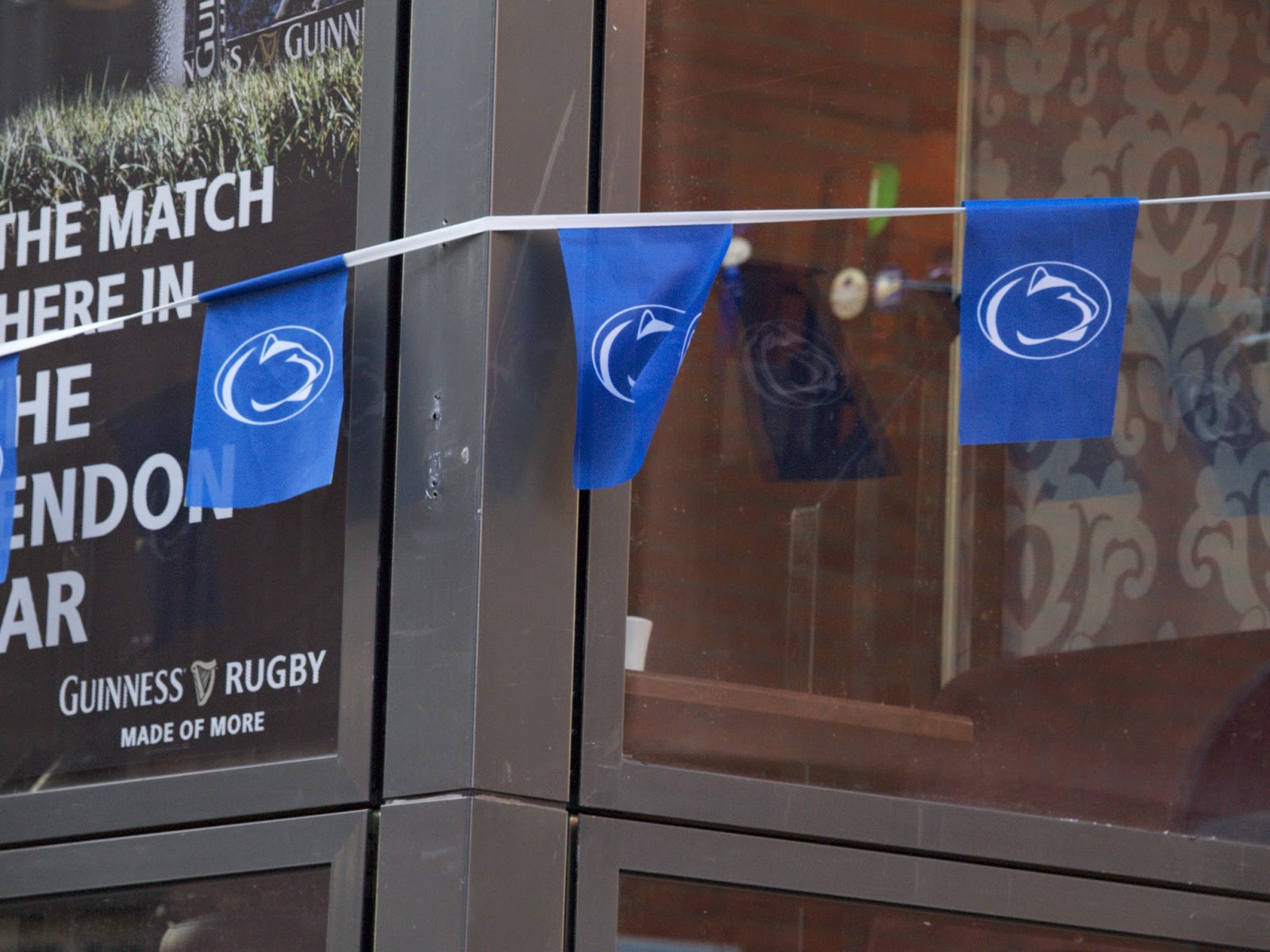 We were really made to feel welcome. 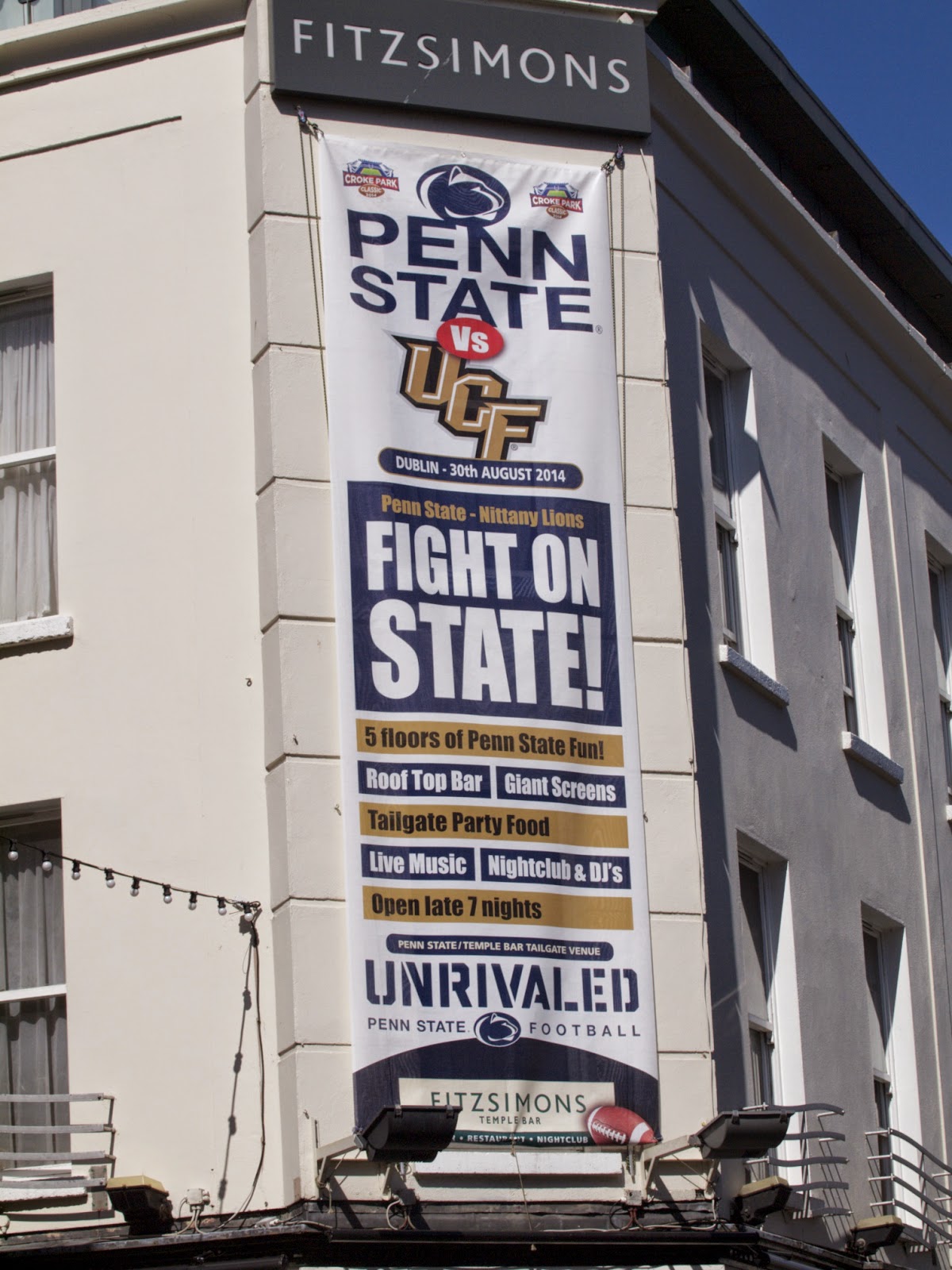 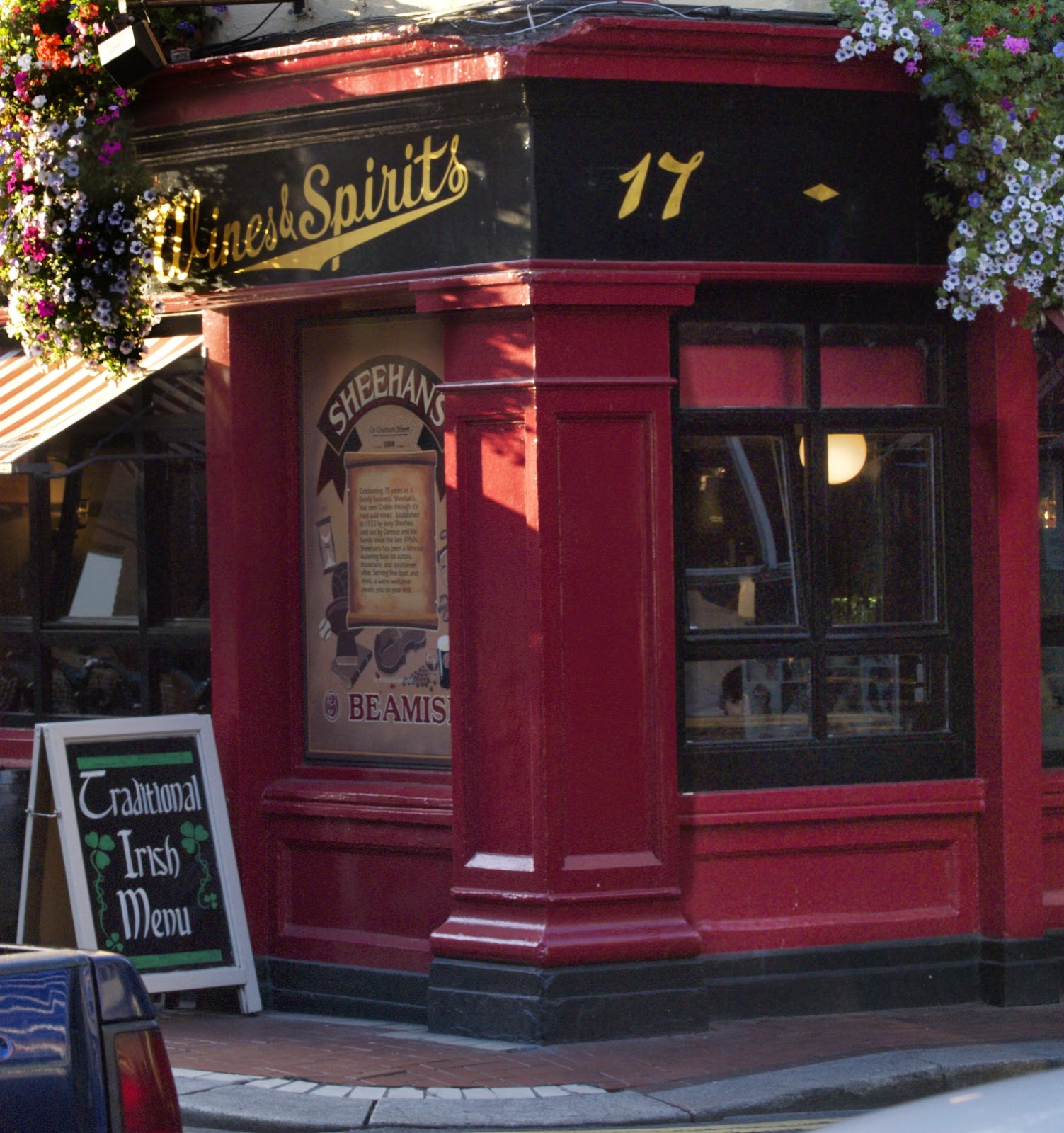 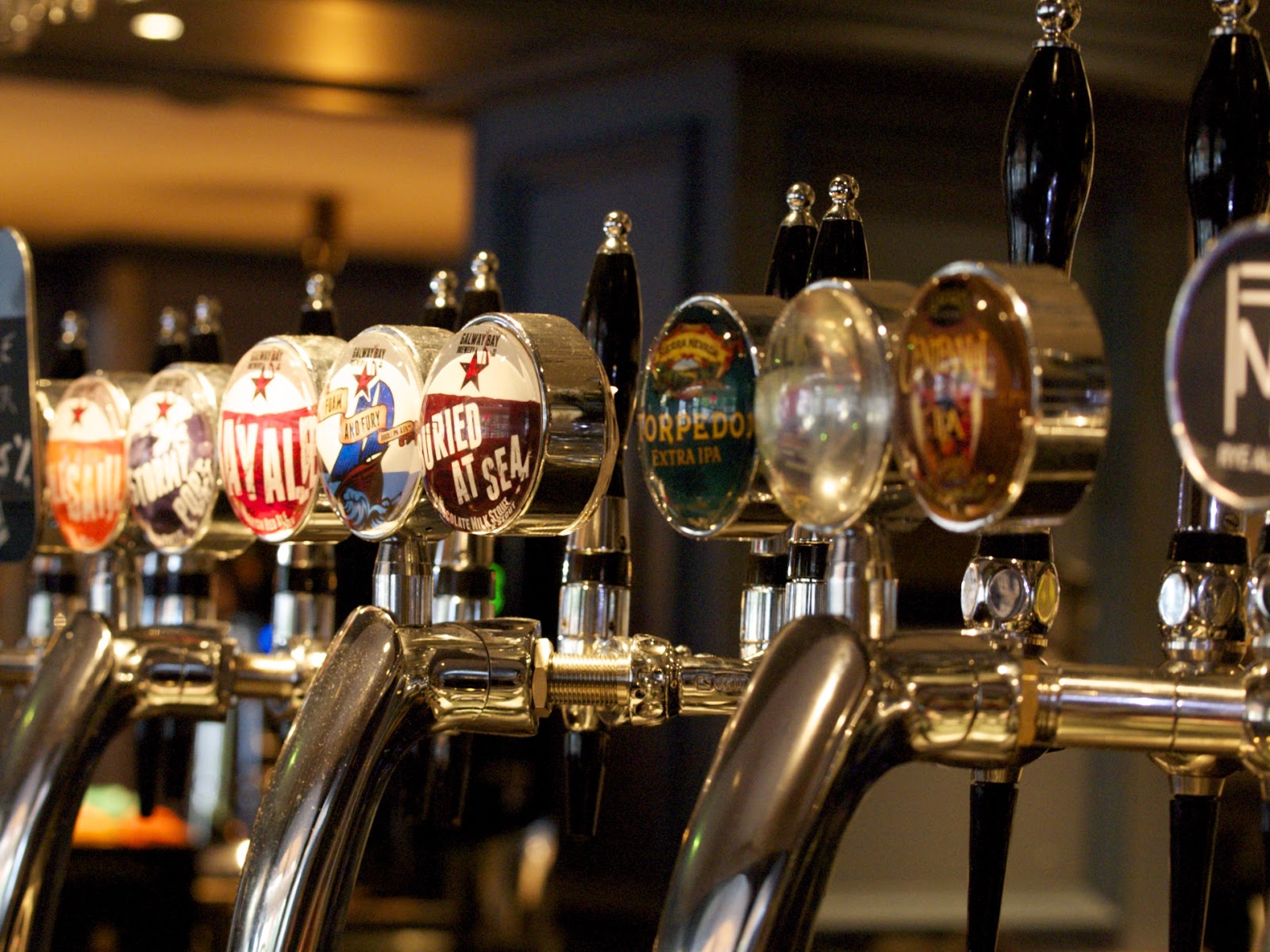 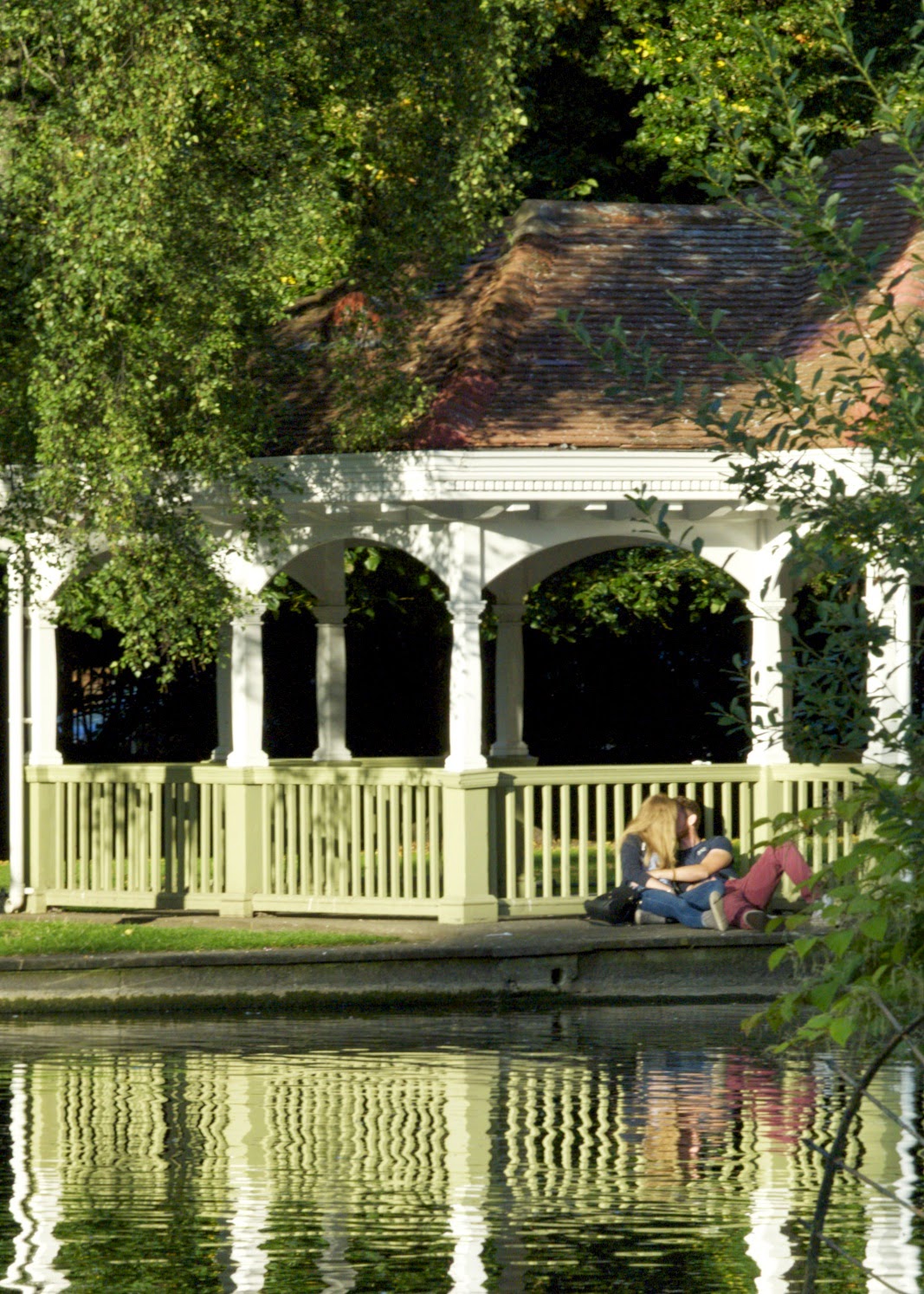 The Samuel Becket Bridge near the port.  It is meant to be in the shape of an Irish harp.  Took a number of other photos when I went back there alone after Paul left.  Will post some of them later. 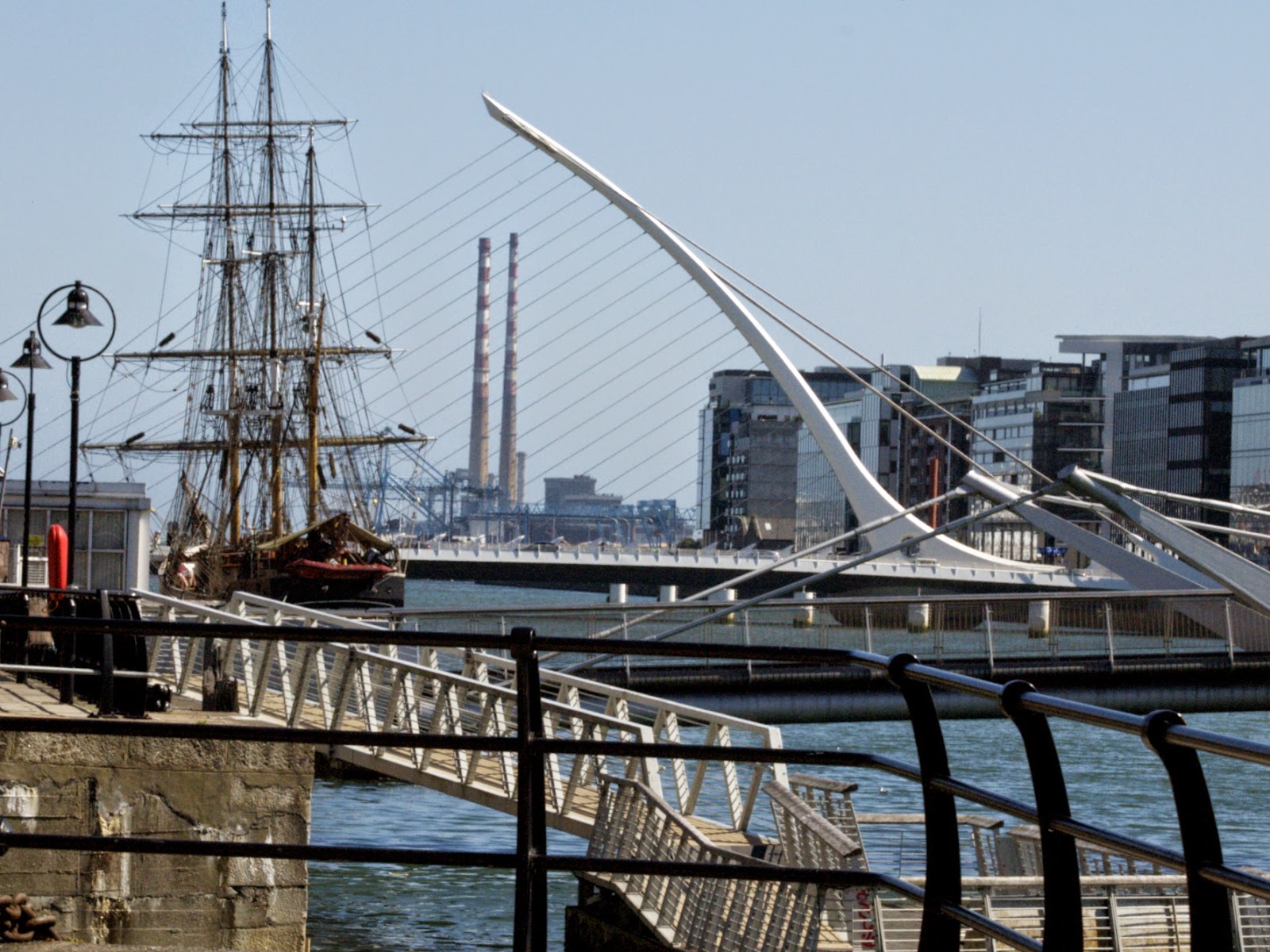 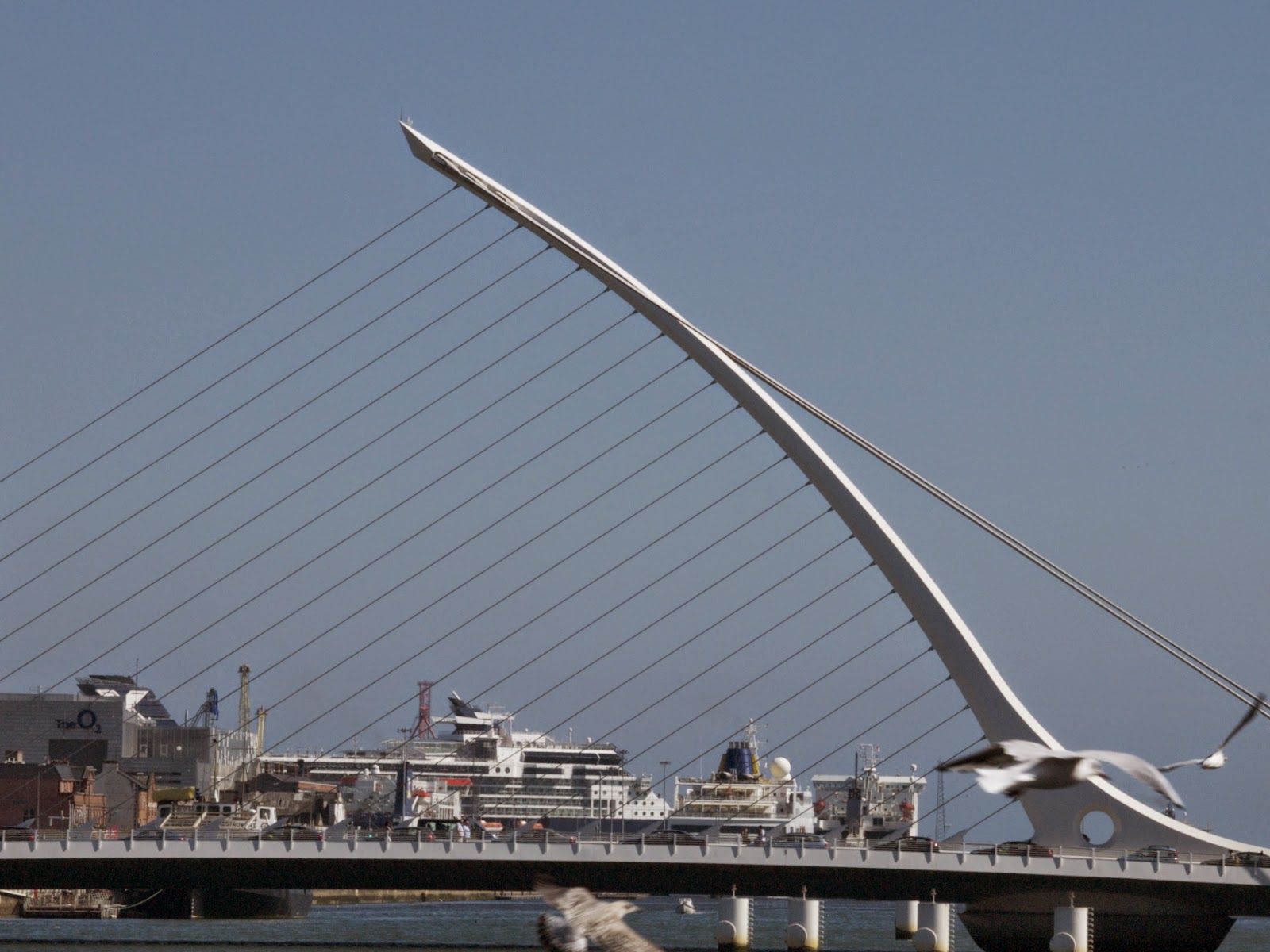