“How long O Lord?
I cry for help
but you do not listen!”

Book of Habakkuk begins with a startling statement.

Habakkuk is unique among the prophets because he openly questions the wisdom of God.  The major theme of Habakkuk is trying to move from perplexity, confusion and doubt toward faith and absolute trust in God.  It is only at the end of the third and final chapter of this short book, that Habakkuk expresses his ultimate faith in God, even if he, like us, does not yet fully understand. In the last verses, sometimes called the Psalm of Habakkuk, we hear him reflecting on the  loss of everything as he writes:

“For though the fig tree blossom not
nor fruit be on the vines,
though the yield of the olive fail
and the terraces produce no nourishment, . . .
Yet will I rejoice in the Lord
and exult in my saving God.
God, my Lord, is my strength;
he makes my feet swift as those of hinds
and enables me to go upon the heights.”

In this magnificent ending to a book that opened with a hostile challenge we learn of the faith that redeems and sustains.

The Gospel begins with the famous statement relating faith to the mustard seed.  When I was in high school many of the girls wore a necklace with a small clear globe and a tiny yellow mustard seed suspended in the middle.  One had to look very closely to make out the seed as it was only one or two millimeters—about 1/25th of an inch—in size.  That tiny seed grows into a bush that, while technically not a tree, is large enough for the birds to perch in as though it were a tree.  It is a metaphor for faith.

Faith is freely given. Faith sustains us through the ups and down of life.  It augments the joys and diminishes the sorrows. Faith brings us eternal life. But we must care for it and nurture it.  Many of Jesus’ parables turn on the question of faith, how it is nurtured and increased.  How we live our faith in the present is a question we must face  regularly.  Just as it takes a long time for the mustard seed to grow into a large bush, so it is with faith.  As we live it, cultivate it, and attend to it through prayer, reflection, meditation on scripture, and participation in the Eucharist, faith matures.  It becomes stronger.  More resilient.  More able to sustain us in good times and in bad. Faith permits us and sometimes compels us, to ask the question which began the first reading from Habakkuk:

Faith allows us to pray with one single screamed word:  “WHY?”  And faith allows us  to endure the startling silence that may be the only reply to that angry why?.  Sometimes it is the example of others whose faith is stronger than ours that helps us cultivate our own.

Six years ago, on Friday September 17, 2010 I was wandering through the Jesuit cemetery in Weston, MA. My fingers moved slowly over the rosary.  Nothing made sense.  I had just viewed the body of Jesuit Father Ignatius Ikunza, a very close friend, who died of a rapidly lethal form of cancer, three days after his 39th birthday. The grave, partially covered with a weathered piece of plywood, was ready.  His body would come down the hill from the funeral Mass around noon.

After Mass the East African Provincial addressed the congregation.  When he was done Ikunza’s mother rose and positioned herself between the altar and her son’s coffin.  She took the microphone from Father Provincial and began to speak.  She spoke about the meaning of her son’s life and the meaning of his death as a seamless whole.  She spoke eloquently about her faith in the resurrection, the certainty of eternal life, and the joy that eased some of her grief,  the joy that he was now with God.  When she finished the congregation packing the large chapel rose and applauded.  We rose because of the example of faith she had just given us.  Because she had taken us through the entire Book of Habakkuk from anger and sorrow to faith, in nine minutes.

As we waited at the grave, another Jesuit nudged me and said, “I hope all of those high powered theologians were listening to Ikunza’s mom.  She is proof that we don’t need them.”  Had he been there Ikunza would have laughed as hard as I did.  Like her son’s, her faith was not something she put on only in times of crisis. It was not something she tapped only during the bad times. She did not look to God only when she needed Him.   She had nurtured the mustard seed of faith that was planted in her over the years.  She shared it with her son, nurtured it, and it grew in him.  With her mighty faith she shielded us mourners from some of the harshness of despair and hopelessness.  Ikunza’s mom should not be unique. It is possible for all of us that, through faith, no matter what happens, the angry question:

can be replaced with:

“God my Lord is my strength,

He enables me to go upon the heights.”

I've been in Ljubljana a week.  Jet lag is beginning to abate though sleep is still a bit of a problem.  Alas, sleep is frequently a problem without the necessity of crossing time zones.
From Monday to Wednesday of this week I was in Trieste, Italy, about ninety minutes by car from here, with eighteen students who are going to live at our residential college, Magis, in Maribor (their classes begin on Monday).  It was a chance for the students, some of whom lived there last year and some of whom didn't, to come to know each other, do some of the necessary paperwork, and relax.  They all seemed to enjoy themselves.  I had a chance to get to know some of them, particularly the medical students, over the course of the days.  On our last day there Peter and I abandoned the kids at lunch and were guests of the Jesuit community for a very pleasant lunch.

Trieste is an interesting city.  I didn't get to spend as much time doing photography as I wished because of the jet lag and because Trieste is built on the side of either a mountain or a cliff.  I can't figure out which.  It featured some of the most narrow, steepest, and serpentine roads that I've seen in a long time.  San Francisco is relatively flat in comparison.  I couldn't imagine living there daily and parking in very small spaces.  Can't quite figure how some of the drivers were going to get their cars out of the parking place in the morning.  After lunch on the last day Peter planned to go to the Adriatic Coast for an hour or so.  That is when the camera got a workout.

Miramare (Look at the Sea) Castle was built by the Emperor Franz Ferdinand in the 19th century.  It sits on thirty-two acres looking directly out at the Adriatic.  I had only an hour with the camera.  The trip out of Trieste to the highway was a nightmare.  Whatever GPS Peter used apparently took us the short way rather than the sane one.  The road was very steep, very narrow with cars and houses, and featured two hairpin turns.  We couldn't make one of them in the van without continuing up, turning around, and then following the road.  Alas, I had to get out of the car to help guide Peter as he backed up into a small space hollowed out of the hill.  It suggested that others had to do the same thing.  As he was backing up I realized he couldn't see me so I scrambled up a dirt mound but fell while doing so.  I only noticed when we were well into the trip that my glasses had apparently fallen out of the pocket.  First time in fifty years of wearing glasses that I lost or broke them.  At the moment I am making do with prescription sunglasses and a pair of reading glasses.  But, given the astigmatism that complicates old man eyes, things could be better than just readers.   My optometrist in D.C. agreed to send me the prescription so I can get a pair made here.  Perhaps by next week. 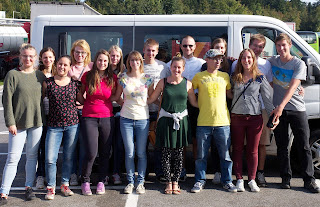 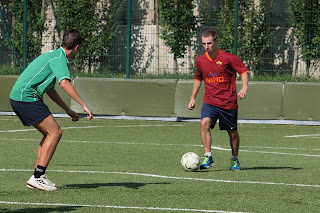 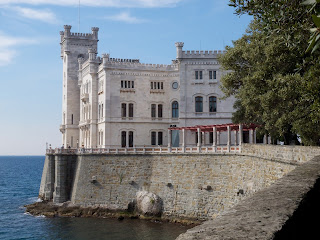 Looking from one of the patios.  A beer, a lounge chair and an umbrella would have been nice. 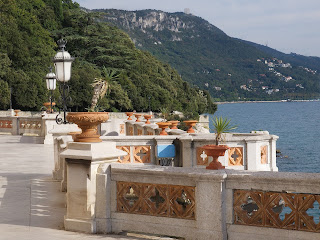 Looking toward the port of Trieste 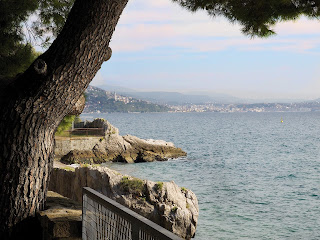 Looking over the ocean from one of the paths leading to the castle.  This is an intentionally underexposed shot that gives the illusion of moonlight on the water when, in fact, the sun was blazing. 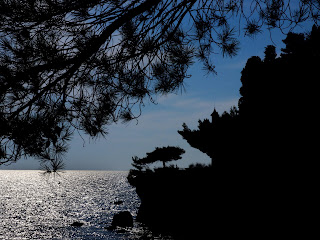