Each of the readings and the psalm for today's Mass could be the basis for a fairly long homily.  There is an overabundance of riches for preaching, for teaching, and for meditation.  As was true of last Sunday's parable of the woman and the unjust judge, the parable of the Pharisee and the tax-collector in the Temple, is found exclusively in Luke's Gospel.  Both parables are about prayer.  Last week we heard about the need to pray without ceasing.  Today we are told how to pray and how not to pray.  This advice is confirmed in the first reading from Sirach.

Sirach is a unique book.  Though written in Hebrew before Jesus' birth it was translated into Greek by the author's grandson. It was known only in Greek  until the early twentieth century.  Sirach, also known as Ecclesiasticus, is not part of the Hebrew Scripture.  Protestants do not recognize it as authentic or authoritative.  Roman Catholics and the Orthodox, however, do hold Sirach as canonical.  The non-acceptance of Sirach in the Protestant Church is a pity because Sirach, like the rest of the wisdom literature, is relevant to our lives in the present.  Though a bit long, it is worth reading in its entirety. And taking notes on the reading.  Like the Gospel, the reading from Sirach is a commentary on prayer. We cannot understand either Sirach or Luke without considering the nature and use of stereotypes.

A stereotype is a general statement applied to a group whose members share a particular characteristic or set of characteristics.  Stereotypes may be used to judge and classify others negatively or to set some groups apart as special.  They can be used in jest or can be bitingly cruel.  The problem with a blanket condemnation of stereotypes, both positive and negative ones, is that they contain a kernel of truth.  One writer defined stereotypes as statistics in narrative form.  It is a very good definition.  All statistics have a degree of truth and a degree of untruth when applied to individuals.

For example a common stereotype is that Taiwanese men have straight black hair and are shorter than the average American man.  In statistical tables this is true.  But then, there is this photo from my ordination.  I am standing next to Ignatius Hung Wan-liu, a Taiwanese Jesuit priest who does, in fact, have straight black hair.  But he is 13 cm or a bit over three inches taller than my absolutely average American height, (or at least I was average height before I began old man related shortening, one of the joys of being on Medicare).  The stereotype is only partially true.  Thus, caution is necessary when hearing or making generalized statements about any group or individual.  Were all Pharisees arrogant egotists such as the one in the parable?  Were all tax-collectors, a marginalized group to be sure, humble?  There is only one answer:  No.  The stereotypes may suggest they are  but no stereotype holds when applied to every individual.  Thus the challenge of both readings.
Poverty, marginalization, and oppression do not automatically confer universal virtues on an individual.  Wealth, intelligence, and power are not the marks of a sinner.  The poor can be, and are, sinners on the same plane as the wealthiest.  And the wealthy can be as virtuous as the tax-collector of the parable.  How would we understand this parable were the roles reversed?  How would we feel if the Pharisee acknowledged his sinfulness and the tax-collector boasted of his fundamental righteousness?  Or, to put it into contemporary terms, suppose it was the tax-collector who had grandiose self-esteem while the Pharisee was a man of humility?

In his commentary on this Gospel passage Luke Timothy Johnson warns that: 'The parable . . . invites internalization by all readers because it speaks to something deep within every human heart.'  The love of God can easily become a kind of idolatrous self-love.  God's gifts can quickly be seized as possessions; what is given by another can be turned into one's own accomplishment.  Prayer can become bragging.  He concludes with the statement: "Piety is not an unambiguous posture.”   That is worth remembering.  The monastic literature contains frequent warnings about the sin of taking pride in one’s humility or boasting about one's prayer.  It is a common temptation.  Humility and exaggerated self-esteem are separated by the finest of lines.

One is frequently advised in theology school to compare different translations of scripture when possible.  This is useful in considering Sirach.  The New American Bible translation we just heard reads: “though not unduly partial toward the weak, yet he hears the cry of the oppressed.”  The Revised Standard Version translates the same line differently: “He will not show partiality in the case of the poor, and he will listen to the prayer of one who is wronged.”   God's mercy does not depend on one's bank account.  God's mercy does not depend on being oppressed.  God's mercy is available to all who seek it in prayer.

We heard a consoling truth in the psalm:

I walked up to the castle again on Saturday.  Not quite as energetically as the first trip but Saturday had proven to be a long and busy day.  The day began with clouds but then the sun came out.  Fatigue or no fatigue, I wasn't going to waste the first sunlight of the week.

The first shows the community in full sun.  When the sun is blasting through the skylights my room is brilliantly lit and warm.  Fortunately the skylights can be opened to allow ventilation. Love the room.  It is very small but fits my needs. 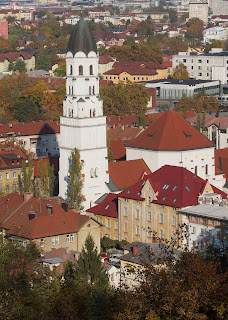 The view north.  Snow arrived on the mountains the other day.  One of the older men in the house was to celebrate a Mass somewhere in the mountains.  However, more than a foot of snow resulted in cancellation.  I hope to get up to the castle on a day when clouds are not obscuring part of the hills so as to get a better photo of the snow.  I see the view of the mountains from the other skylight in my room. 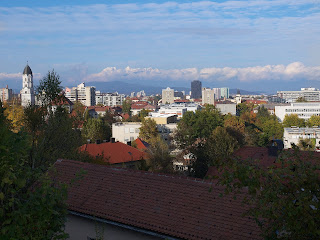 A telephoto (equivalent of 400 mm) shot of the mountains. 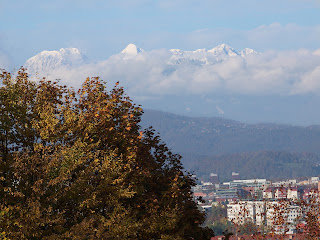 Tourists on the observation part of the castle.  I didn't go up as it required a ticket.  Cheap.  I am cheap.  I took this from the road while walking up to the castle. 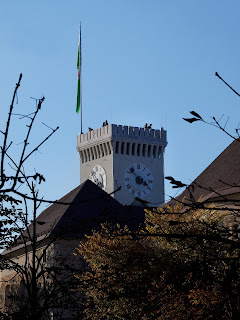 The view of the castle from the other side.  The path is much farther below the castle than in the front approach. 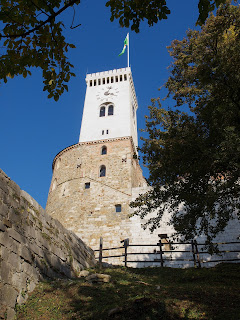 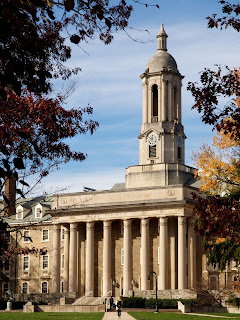