The first reading and the Gospel share an interesting musical juxtaposition.  Parts of both are sung  in the first part of Georg Freiderich Handel’s Messiah.  The reading from Zechariah is the basis for the soprano air “Rejoice greatly Oh daughter of Zion.”  The last three verses of the Gospel follow closely.  Verses 28 and 29, with the pronouns changed from the first to the third person, are the final two verses of the exquisite air that begins with a quotation from Isaiah (40:11)  “He shall feed His flock.”  It then continues:

"Come unto Him all ye that labor
Come unto Him that are heavy laden
And He will give you rest
Take his yoke upon you
And learn of Him
For He is meek and lowly of heart
And ye shall find rest unto your souls."

The final verse of today's Gospel reading, "His yoke is easy and His burden is light,"  is the final chorus of the first part of this magnificent work.

Triumphant and peaceful are two words that don’t often appear in the same sentence.  Think about it. A donkey is useless in war, at least in a war that was fought on the ground.  Were the king to enter Jerusalem mounted on a horse, were Jesus to have entered Jerusalem on a horse, the image would have been aggressive rather than peaceful.  We know from all four Gospels that Jesus specifically instructed his disciples to bring a colt or an ass and not a horse for his entry into Jerusalem.   He was proclaiming the message of peace rather than aggression even then.  Zechariah portrays the king not only as peaceful but as humble, just as Jesus describes himself in Matthew.

One scholar writes of the king’s humility as follows, “The future ruler will in some basic way be identified with and no different from those who consent to come under his rule.  Yet, he will have the resources and power to dominate the nations and establish worldwide peace and stability.”

“And no different from those who consent to come under his rule.”

This reiterates a basic tenet of our faith, that Jesus was fully human and fully divine, like us in all things but sin.  This tenet is reiterated daily when, while pouring the water and wine into the chalice during the preparation of the gifts, the priest is instructed to say inaudibly,

“By the mystery of this water and wine
may we come to share in the divinity of Christ,
who humbled himself to share in our humanity.”

One might ask why Jesus is thanking the Father for having hidden things from the wise and learned yet sharing them with the little ones?  Exactly what was being both hidden and shared at the same time? From whom?  The late Jesuit Father Dan Harrington suggested that what God has hidden from the wise and powerful but shared with the poor and lowly is the significance of Jesus’ deeds and the presence of God’s kingdom in His ministry, the unique relationship between the Father and the Son, a relationship that is open to those to whom the Son wishes to reveal the Father.  A relationship that answers Jesus’ invitation to join him.  One need not be materially poor to know what Jesus reveals to the little ones.  But one must possess the trusting faith characteristic of children.

The psalm proclaimed:
"The Lord is gracious and merciful,
slow to anger and of great kindness.
The Lord is good to all
and compassionate toward all his works."

It is God’s mercy and kindness that makes His yoke easy and His burden light.

Handel’s Messiah is a magnificent work.  The music and libretto come together in sublime unity.  From the opening, “Comfort ye, my people” to the almost overwhelming "Amen" that ends the work, we are reminded again and again of what Jesus did  for us.  Is there any reason to refuse the invitation to take his gentle yoke upon our own shoulders? 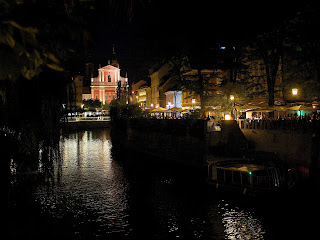 I've been playing with a technique of moving the camera during a long exposure, in this case 1 second.  The movement was left to right.  The challenge is in keeping the camera more or less level. 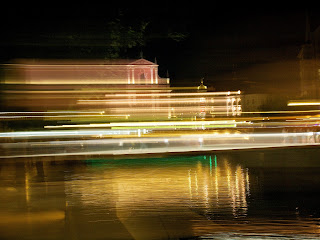 This is a plainly bizarre shot of the Franciscan Church and river.   It was intentionally very overexposed so as to play with it.  Works better in black and white. 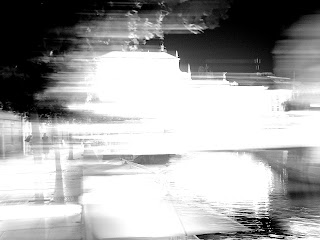 The next three photos are "Pop's Place" a burger and beer place overlooking the Ljubljanica not far from the Franciscan Church (quite possibly lunch place after Mass).  The owner is a Slovenian-American who grew up in California.  Among the best burger I've eaten in years, including at some high end restaurants.  The beef, a selected blend, is butchered on premises and ground fresh daily.  The brioche rolls (they are magic) are baked a Tom Brady bomb away across the river.  It is obvious from the taste and texture that the beef never even passed in front of a freezer to say nothing of being stored in it.   This first was taken on the opposite side of the river. 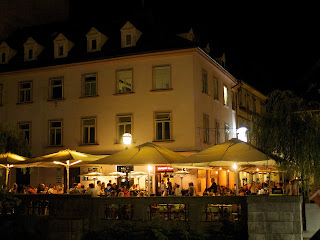 Crossed over the bridge for this one. 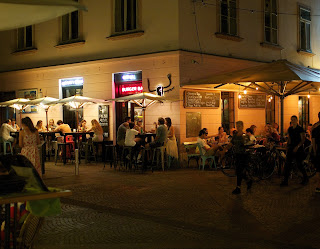 A close up of the inside.  The inside eating space is small as is true of most of the cafes here.  Slovenians eat outdoors in all kinds of weather.  The umbrellas have heating elements in the winter.  Other places have heaters below the table.  Most restaurants supply blankets or sheepskin to stay warm when eating or smoking outdoors.  I sat at the table inside and had a Grim Reaper beer a few nights ago.  Wicked bitter which is how I like my beer.  It was also ice cold, a real challenge in Europe.

Plečnik's colonnade is my favorite building in the city.  This was taken looking up toward our community which is actually downstream.  The next was taken from the opposite side of the river looking back toward the Triple Bridge and the Franciscan Church. 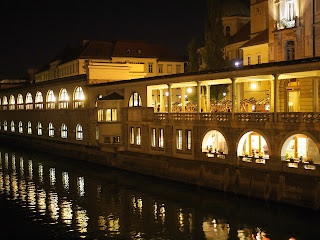 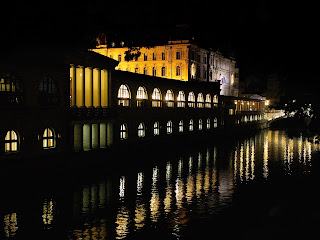 Then there is Cacao.  Gelato places dot the city.  This is one of the busiest. Both indoor and outdoor options. 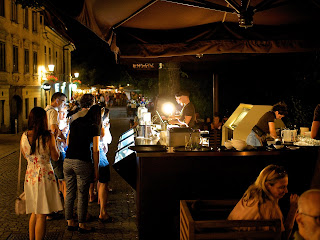 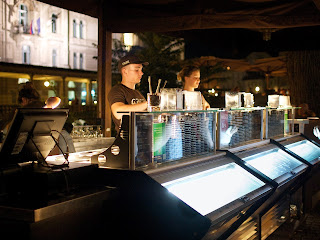 This was my 'tiramisu gelato' just before I dug in. 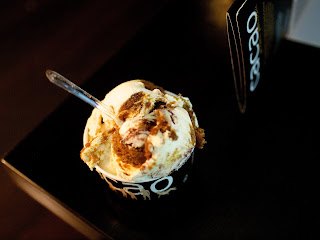 One of the many cobblestoned alleys.  The yellow building with the red door on the left is a Chinese restaurant. 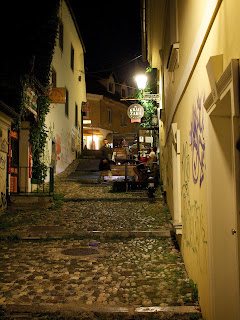 A bridal shop.  Finally took some nighttime shots after walking by it multiple times.  I was drawn by the graceful pattern of the security gates against the white dressed in the background. 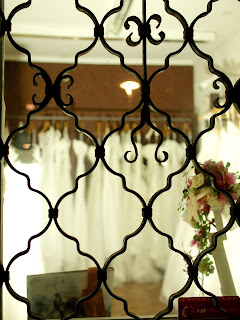 Am going to miss LJ.  I don't think I will ever live in a place with so much photographic potential.  If sent back it will not be a problem.