Homily for the 25th Sunday in Ordinary Time

Is 55:6-9
Ps 145
Phil 1:20c-24, 27a
Mt 20:1-16a
No Fair! The ref missed a foul!
Mooooooommmmmmmmm! She got a bigger piece of cake than me. Unfair!
It’s not fair! Why does it always rain on MY weekend off ?!?
Sound familiar? It should. We become sensitized to fair and unfair, we become overly sensitized to fair vs. unfair, early in life, certainly before third grade. For some special interest groups whining “no fair” or looking for evidence of unfairness falls somewhere between a hobby and an art form if not a billy club with which to beat others over the head. But fair is a relative concept. Even more than that, fair is a human concept. Fair is an idea defined by human vocabulary. It does not apply to God.
The gospel parable is one with which we can identify. Four groups of workers are recruited for manual labor at various times of the day, from early in the workday to an hour before its end. It is easy to understand the excitement on the part of the first group to be hired. The last group was paid first. AND they were paid a full day’s wages. We can almost hear the first group thinking or saying among themselves, “Wow! Time and a half!! Double time!!! Bonus city!!! Bingo!!!!” And, we can identify with their annoyance bordering on fury that they were paid no more than those who worked an abbreviated day. Of course they were paid no less. But, that didn’t stop them from whining “No fair.”
GOD IS NOT FAIR.
That should be cause for great rejoicing. The first reading helps explain.
“For my thoughts are not your thoughts nor are your ways my ways. As high as the heavens are above the earth, so high are my ways above your ways and my thoughts above your thoughts.”
God is beyond the concepts of fair and unfair. In our understanding, fair means that each gets what he or she deserves. No more and no less. Human ideas and concepts such as the difference between fair and unfair cannot be projected onto God. God transcends our descriptions. God cannot be contained by our pitiful human vocabulary when it attempts to describe that which is indescribable. We can never know God’s mind. God showed that He is not fair by sending His only Son to redeem us from our sins. God showed how unfair He is by sending Jesus to free us from the snare of death. Only through God’s unfairness could we hope to have eternal life. God showed how unfair He is in the life of Our Blessed Mother Mary who said, “may it be done unto me according to Your word.” She, who was conceived without sin, endured the same sorrows, the same unfairness that we do in our daily lives.
Because Jesus came into this world to suffer and die for our sake we know that God is not fair. Because Jesus came into this world to suffer and die for our sake we know that God is magnanimous. We know that God is overwhelmingly generous. God is so far beyond fair that the term no longer has any meaning in reference to Him. God is not fair because He offers redemption to all of us, small time sinners and chronic mortal sinners. That redemption is available regardless of income, size of house, make of car, or zip code. True, we have to ask. Yes, we must repent our sins. But that option is open to everyone. God is there to forgive, to give us the same wage, redemption from sin, the same wage, the defeat of death, the same wage, life eternal, no matter how many hours we worked in the vineyard.
“Let the scoundrel forsake his way,
and the wicked his thoughts;
let him turn to the Lord for mercy
to our God, who is generous in forgiving”
We should be as unfair as God is when it comes to forgiveness. Grudges. Vendettas. Gossip. Slander. We are adept at all of them. We can be slighted or hurt by someone and remember every detail of that slight. Forever. We are skilled at non-forgiveness. Plotting revenge is a popular indoor sport. But that is not God’s way.
Jesus summarizes much of human behavior when He asks, “Are you envious because I am generous?” The answer is yes, unless we are the recipients of more generosity than everyone else. Then we feel we deserve it. But do we truly deserve what God has done for us? Are we truly worthy recipients of what Paul wrote in the Letter to the Romans? ”While we were still sinners Christ died for us.” If God were fair, if God gave us what we truly deserved, no more and no less, Jesus would never have died for our sins.
“The Lord is near to all who call upon him.”
The Lord is near to all, not only to the wealthy not only to the powerful. The Lord is near to all. He offers redemption to all. He offers love to all. Without exception.
It is not fair.
Thank God.

The photos are from St. Vincent Archabbey in Latrobe, PA.  I made my diaconate and priestly ordination retreats here.  Hospitable community, a beautiful setting in Western PA, and fine liturgy.   Would like to get back there this autumn for a few days and a chance to visit a friend who is a student at St. Vincent University. 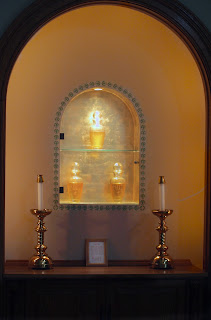 The monastic church.  Was the site of Arnold Palmer's funeral. 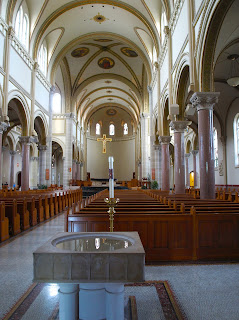 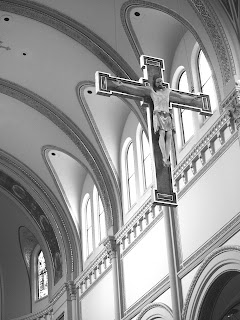 The last two are the sacristy.  The albs are for concelebration.  All monk priests concelebrate the conventual Mass. 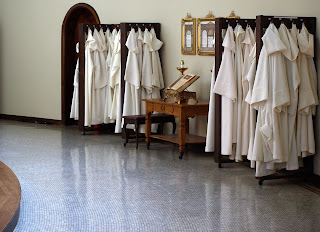 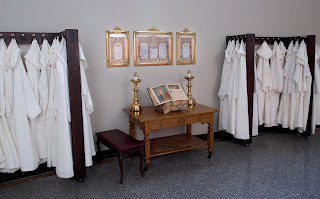