In 1518, 27 year-old Iñigo de Loyola was struck in the leg by a canon ball during the Battle of Pamplona. He had refused to surrender to the French despite impossible odds. The French, for their part were so impressed by the man's tenacity that rather than imprisoning him, they got him back to the family castle of Loyola where he underwent a long, difficult, and, in some ways, almost impossible recovery.

While recuperating he had only two options for reading: a Life of Christ and a book on the Lives of the Saints. With openness to the movement of the Spirit, with contrition for his past sins, and freed from the shackles of the old self, Iñigo, who now adopted the name of Ignatius, went on to write a set of spiritual exercises that have influenced uncounted and uncountable millions of people over the past 450 plus years.
In 1540 The Society of Jesus was formally recognized as a religious order. Today, in 2019, it is firmly established throughout the world, engaged in diverse ministries and works.
He died in Rome on this day in 1556 as the first Father General of the Society. Celebrations have been held, and will continue to be held, throughout the known world on this his Feast. The Jesuits of Boston College and Faber Community will gather this evening for Mass and a celebratory dinner.
I've celebrated this feast in several cities in the U.S., in Taipei, Ljubljana, and N'Djamena. Greetings to my Jesuit brothers throughout the world. Happy Feast.
AMDG.

A bronze depiction of Iñigo after sustaining the leg wound. 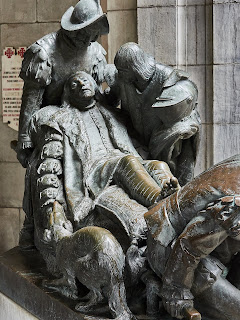 At the last minute I decided not to concelebrate the Mass (There were lots and lots of Jesuit priests) and instead wandered with the camera. The statue of Ignatius overlooks the entire assembly. 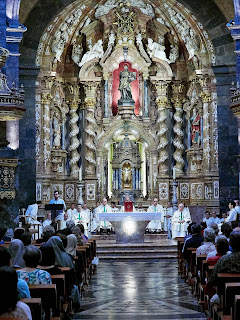