One year ago on Palm Sunday the tertians in Australia celebrated their last Mass together at Sevenhill.  It began with the blessing of palms out by the metal sculpture of Mary and then proceeded into the chapel for Mass.  The long retreat had ended three days earlier.  An hour or so after lunch we departed for two nights in Adelaide and then four of us began the very long drive (1000 miles) from Adelaide to Sydney.  That was a fascinating two day adventure that included being stopped in a routine drink-driving stop (at 11 AM), an overnight in Hay that featured the kind of meal that could only be tolerated with three beers, and a finish in the ghastly rush hour traffic typical of Sydney.

Things are more controlled here in Weston.  I will celebrate the 10 AM Mass in the community and then walk all the way across the driveway to my room.  Later this week I will head to Plymouth for the Triduum and return on Easter Monday.

After proclaiming the Passion it is absurd to preach at any length.  There is no need.  There is no reason.  Thus the attached homily is 91 words.  More than 100 would be overkill. 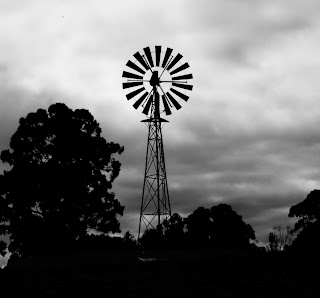 This next is the horizon behind the house.  The color of the sky was tweaked. 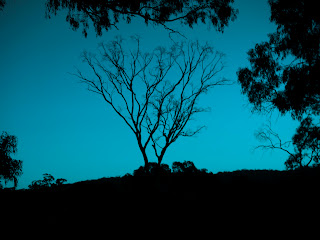 St. Aloysius Church is on the grounds of the winery and retreat house.  This was taken during sunrise early one morning close to the end of the retreat. 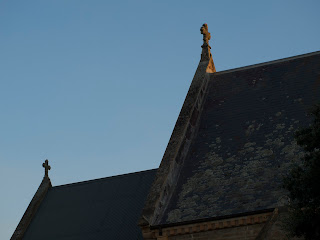 The roses were discarded from the gardens surrounding the church.  Despite the fact that it was technically autumn roses and other flowers were blooming everywhere. 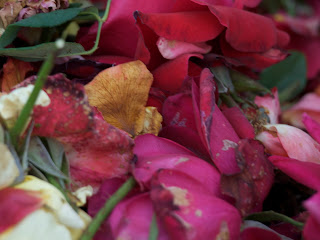 The last is the crucifix in the church at sunset.  Sometime just before Mass the setting sun would stream through the stained glass resulting in a shifting pattern of colored light on the sanctuary. 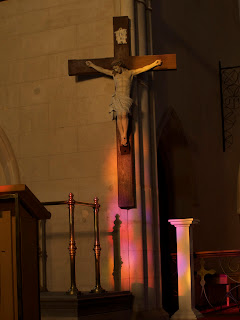