The searing heat that complicated Monday's Boston Marathon is gone.  Unfortunately a few runners are still in hospital. Temps are reasonable, the sun is shining and trees are blossoming all over the grounds.  Though it is an unrealistic wish, it would be great if the weather could stay like this for about two months (with the occasional rain as it is a bit dry up here).  Below is the homily from the 6:30 AM Mass today followed by some photos and thoughts on black and white photography.

2nd Thursday of Easter
9 April 2012
Acts 5:27-33
Ps34
Jn 3:31-36
". . . but whoever disobeys the Son will not see life,
but the wrath of God remains upon him."
"the wrath of God."
I suspect a number of us here, when asked how we feel in the midst of a severe cold, or the throes of a nasty hangover or after traveling for 30 hours from Sydney to Washington, D.C. have responded "like the wrath of God."  We may have been in pain, sore, exhausted or downright ill.  Unfortunately we see, yet again, the multiple problems associated with translation combined with the evolution of language and use of language.  What is the wrath of God?  Perhaps it is better to begin with the question what isn't the wrath of God?
It isn't that strength-sapping diffuse muscle soreness that accompanies the flu.  Nor is it the screaming pain in your chest upon awakening from bypass surgery (been there, done that).  Alas, because of the frequent colloquial use of the term, we must be certain that we don't understand the wrath of God as the spiteful anger of a vindictive God withholding His love while hurling thunderbolts of punishment.
Jesuit Father Stanley Marrow noted that "the wrath of God is the judgment that is consequent upon the rejection of God's love."  It sounds here as if one could argue for a vindictive God but Stanley goes on to elaborate.  "A gift, even a divine gift, is not a gift unless it is freely accepted.  If this gift is eternal life, its rejection can only mean death.  The rejection of the free gift is a judgment."  It is this rejection that the Bible calls the wrath of God.  And then Stanley makes the startling observation that even the Creator stands helpless before such a rejection by a creature he created free.  Our rejection of God's gift of life puts the Creator of All Life into the position of helplessness.
The wrath of God is not His angry punishment directed at us for misbehaving.  Rather it is the punishment we direct toward ourselves when we reject the gift of eternal life in favor of death.
____________________________________
One of the joys of digital photography is the opportunity to turn any photo into black and white.    I picked up a digital photo magazine in the New Orleans airport to help pass some long layover time away.  There was an interesting article on black and white photography that suggested always shooting in color because of the ease of changing a print to b&w.  I certainly wouldn't argue with the writer.  These are photos from Australia that I've been playing with, not only converting them to b&w but increasing the contrast, darkening some shadow and highlighting some highlights.
The first three are a man walking his dog on Gerroa Beach where we spent ten days shortly after beginning tertianship.  The third is unretouched color.  All shots were taken in the span of a minute or two.  It was sunrise and I was shooting into the sun, not a recommended technique.  The glare in the color is fierce but when converted to b&w with heightened contrast the glare, that gave the photo an  I-have-cataracts look, became an asset. 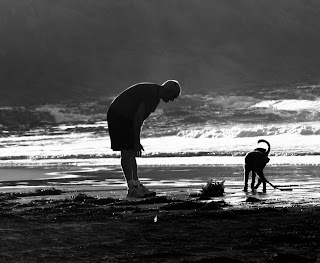 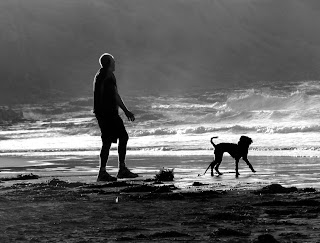 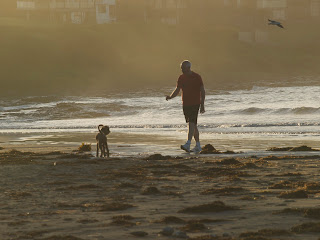 The next three were taken at Minnamura State Park, a strange ecosystem with three different kinds of forest, about 20 miles from Gerroa.   The first is a bridge across a creek.  The light was filtered through the trees and it was terrific.   I manipulated this one very little. 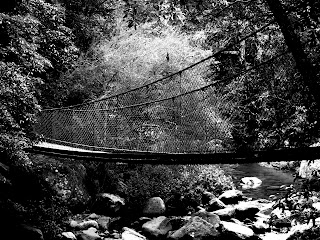 The next is ferns and lichen on a log.  The original was underexposed.  A click here, a brush there, and an adjustment wherever produced a pleasing (to my eye) shot.  I think the Seven Dwarfs had just left for work.  Sorry I missed them. 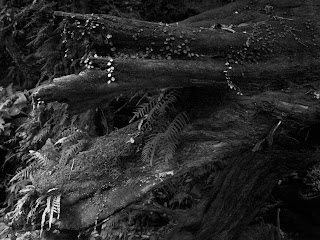 Who can resist mushrooms.  Disney's Fantasia comes to mind. 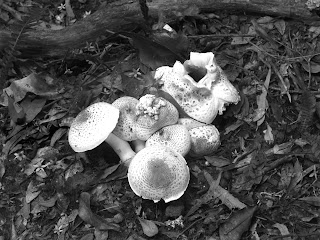 The wooden fence was weathered brown.  The fields behind it were green and brown.  The color was undistinguished but the b&w shifts the focus to texture and shape rather than a bland composition of neutrals. 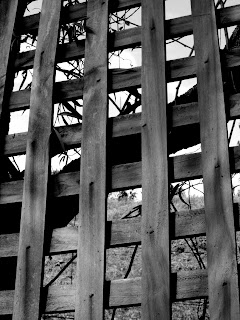 The final two are a color before and a b&w after.  Who is his right mind takes photos of a few weeds at sunset?  This was manipulated in the extreme to highlight the bright spots and darken everything else.  It looks like a physics book illustration of Brownian motion. 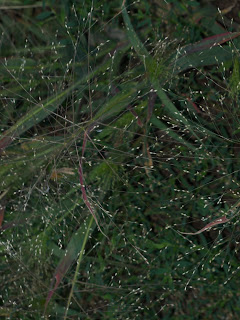 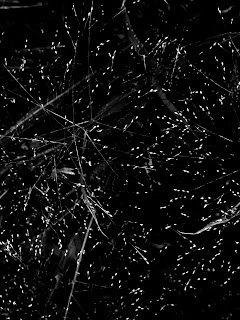