Am I homesick in France?  It was a shock to realize that I am, in fact, homesick.  It is homesickness in a different sense than it was during my first, only and never-to-be-repeated camping experience, in this case a Boy Scout camp in the Poconos.  The only thing I learned from that dreadful, god-awful, and miserable experience is that roughing it means staying in a hotel without a coffee maker, iron and ironing board in the room and no room service.  Never ever ever again.  This doesn't mean objecting to living in what are sometimes challenging conditions.  Have done that more than once and will do it again.  But voluntarily sleeping on the ground or on a cot in a tent?  No way.  However, I digress.

During my first trip to Taipei I met Pepe, a Spanish Jesuit priest, who had been sent to Mainland China as a young Jesuit.  When the Society was expelled in 1949 he, unlike the rest of the men, was sent to the Philippines.  It wasn't until many years later that he arrived in Taiwan.  By then his Chinese language skills were very rusty.  When we met he was working on the gospel reading for the next day, painstakingly looking up characters he did not recognize and putting in their phonetic pronunciation.  We began to chat.  He said something that has haunted me for years.

He noted that he cannot be spontaneous or funny in Chinese.  Most heartbreaking was his statement that every morning he rehearsed what he was going to say to the woman who worked at the desk before he went to his office.  That stopped me dead in my tracks.  Given the joy I take in puns, word play, and jokes that are context dependent, it would be, and it is here in France, a heavy cross to bear.  Underneath Pepe's sorrow was a desire to be free without the need to think every moment about what he was going to say and how was going to say it.

For some reason this has been hitting hard the past week.  I can speak French easily in class.  The teachers use French exclusively and I have no problem with instructions or 90% of the conversation.  However, meals in the community have become a time for ramped up stress.  Table conversation is different from classroom conversation.  It is context and person dependent and is oftentimes spoken rapidly with the use of slang and colloquial expressions that will never be understood by the foreign-born listener.  Ignatius once explained that despite many of the American Jesuits having lived in Taipei for decades he speaks to them differently than he does to native friends, avoiding certain colloquialisms that a foreign-born speaker would never get.

I recall a silly encounter with a Korean Jesuit friend.  His English was never very good, even after four plus years in the U.S. I returned home late one evening to find him watching The Full Monty with subtitles (he read English well but couldn't 'hear' the sounds of English).  During the scene in question one of the men said the line, "The lunchbox has landed," a takeoff on Neil Armstrong's "The Eagle has landed" on the first manned moon landing (my understanding).  My buddy paused the movie and asked, "What means eagle has landed?"  I began to explain.  After three or four minutes of increasing confusion on his face and frustration on my part I realized the complete absurdity of what I was trying to do and  said, "Turn the movie back on.  You could live in this country for the rest of your life and become perfectly fluent in English but you will never understand what that line means."  We watched the rest of the movie.

That is what homesickness is now.  I can't express myself well in French and, no matter how comfortable I become with the language, never will be able to use it the way I do English.  I've gone from being professor to student, from being very articulate (no faux humility here, I am articulate) to sounding like someone recovering from a stroke; from being able to celebrate Mass to feeling totally inadequate to do so.  Can't wait to get to Ireland where I expect to celebrate at least one Mass for the Carmelites for the Aged and Infirm in English.  Not being able to celebrate Mass and preach is the worst part of this experience.

I'm not good at asking for help.  Dependency is a situation that horrifies me.  I am a bit less dependent now than I was when I first arrived.  That is a good thing.  There will be some regression in Chad, at least initially.  Back home however, I am self-determining be it from something simple such as calling Jack to suggest we meet at Mel's for breakfast to navigating the joys, wink wink, of helping a man with a hospital admission.

I'm not homesick for the geography of the U.S.  There was no exacerbation on the 4th of July, particularly given the weather in Boston.  Lyon is a beautiful city and a photographer's dream.  Homesickness is the loss of self-determination and self-definition. I am neither priest nor physician here in France in any sense but the technical. I can exercise neither faculty.  I laughed when Sr. Julia Marie booked me to celebrate Sunday Mass in Framingham one and one-half days after I return to the States.  Now I am grateful.  September 7 is a date to anticipate with great joy.  A return to my usual routine.
_____________________________________________
Photos from the Alps and from Lyon, beginning with the Alps.

The French seem to plant flowers wherever they can in window boxes (see further below) as well as this pot in front of the hotel in which we stayed. 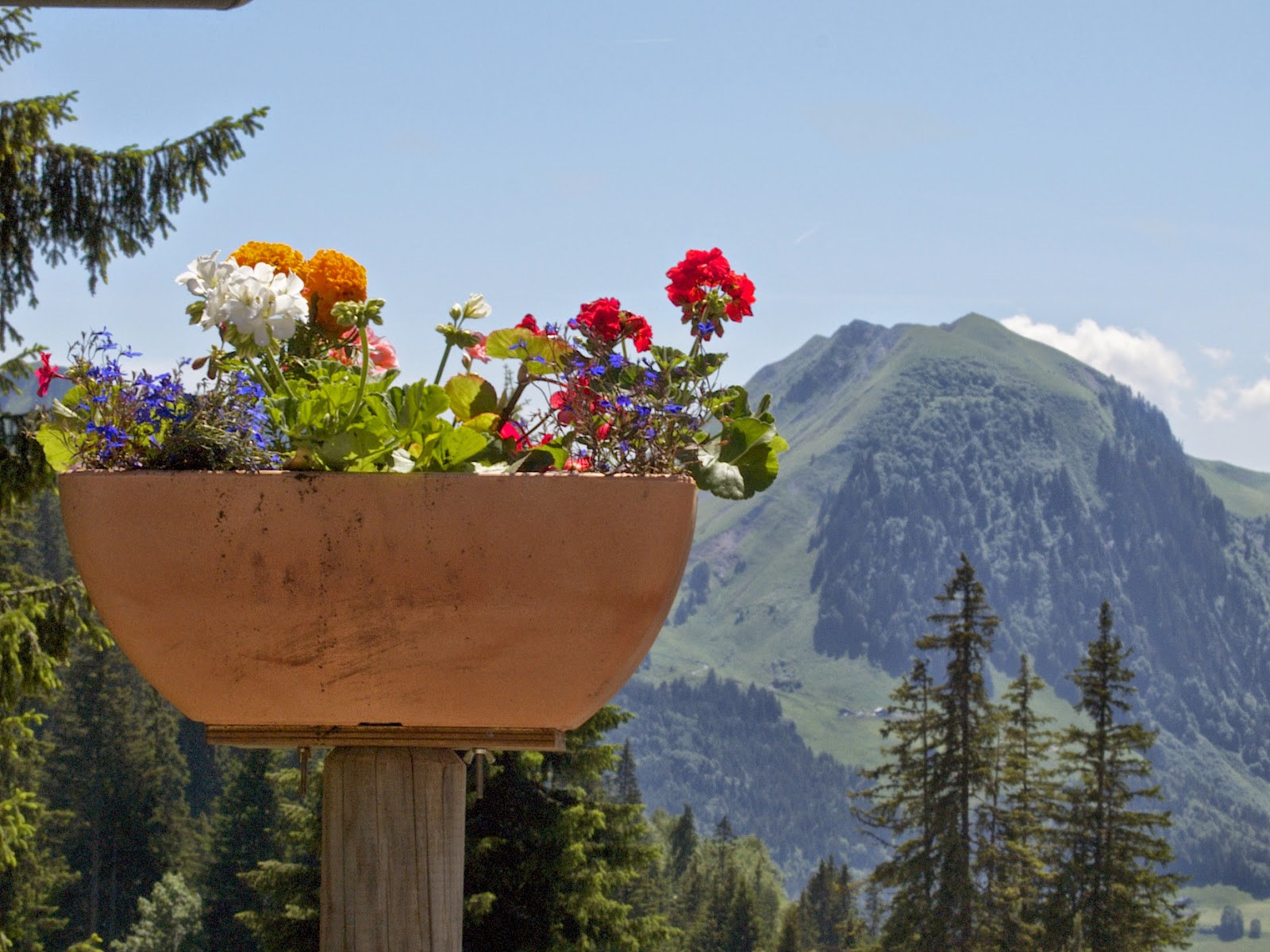 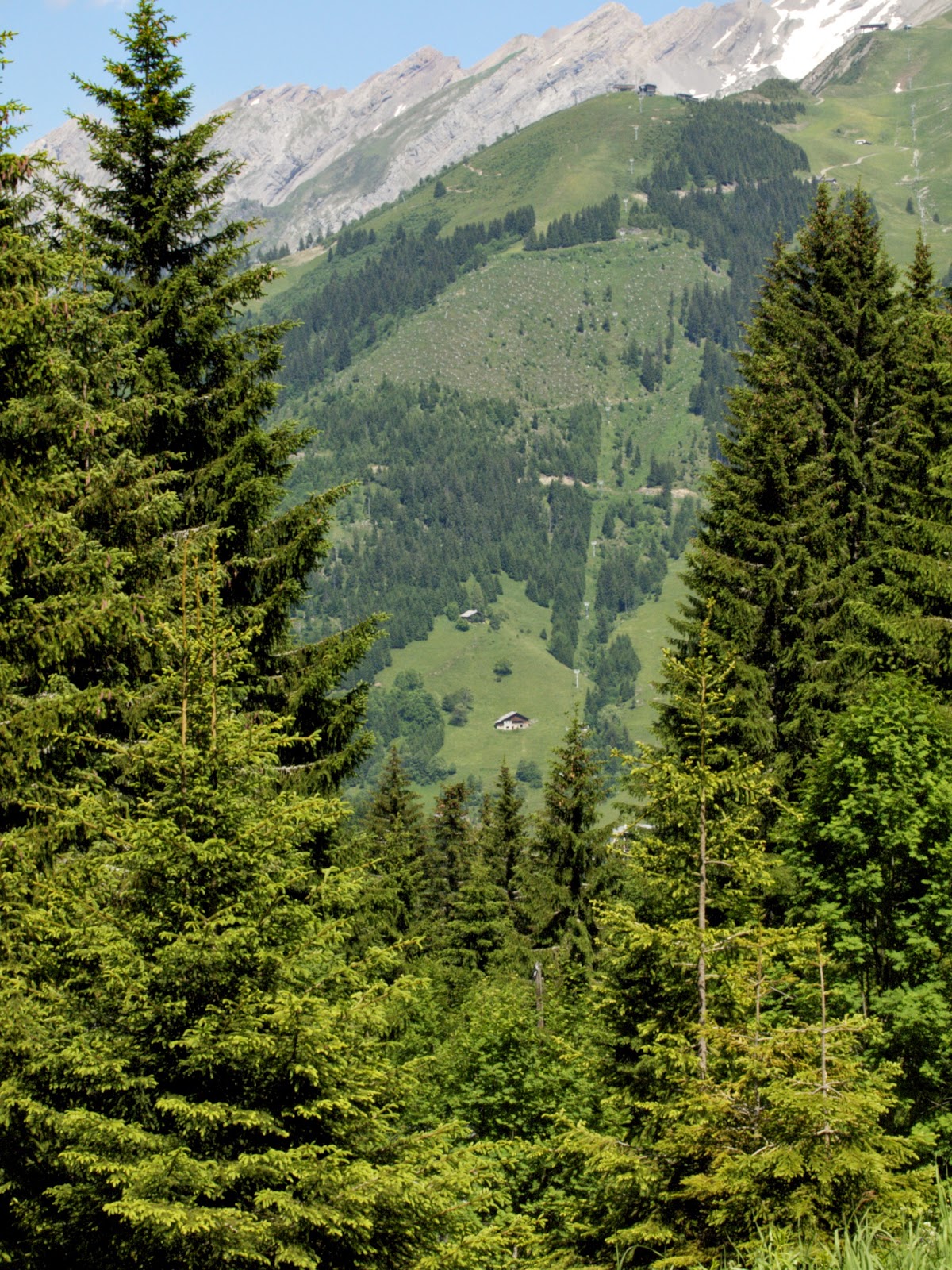 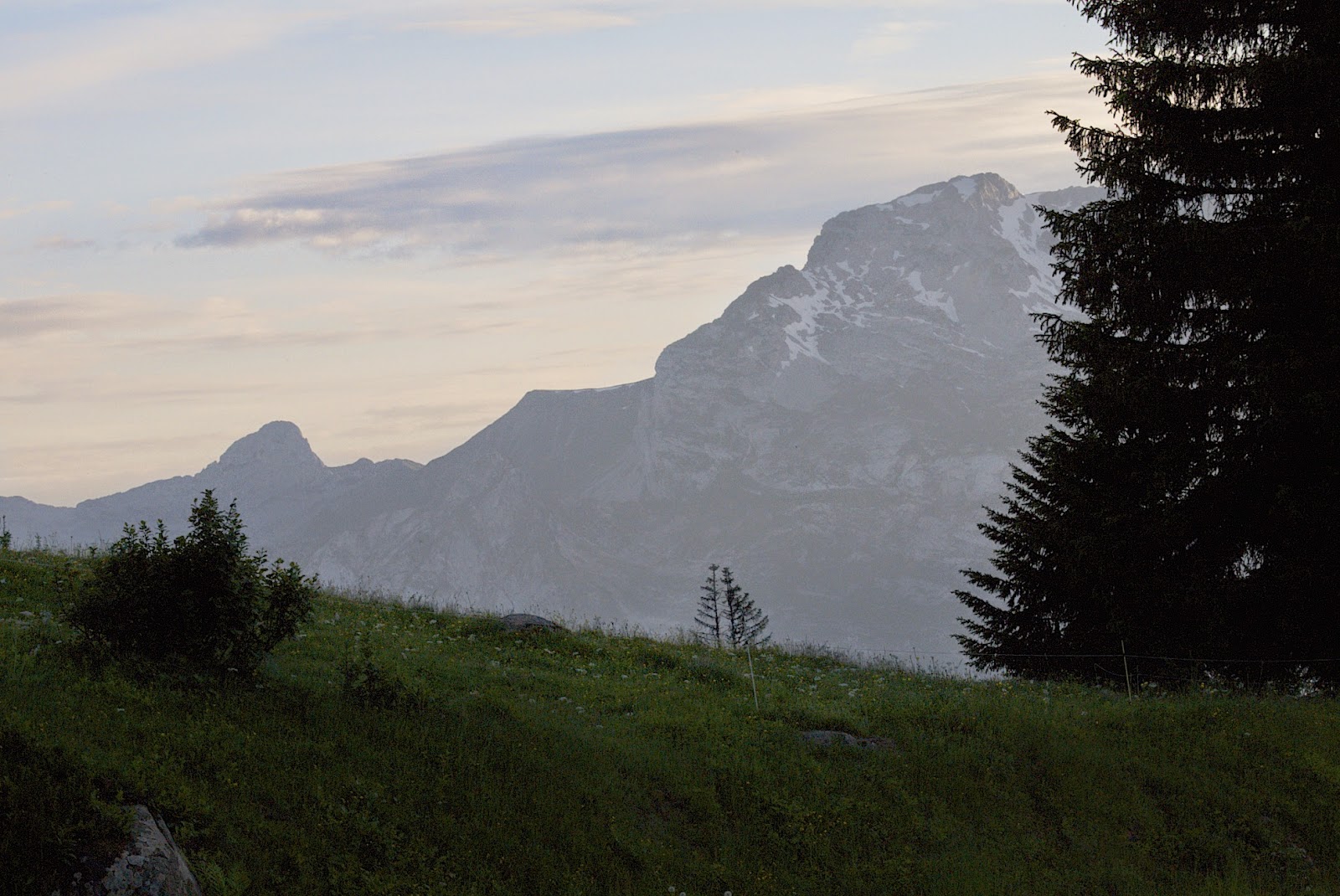 The weekend of 21 June is a national music festival.  All kind of music.  Before Mass two bands seemed to be competing in the square in front of the church.  The reflections in the bell of a horn were great.  The guy in the reflection seems to be swirling into the depths of the bell. 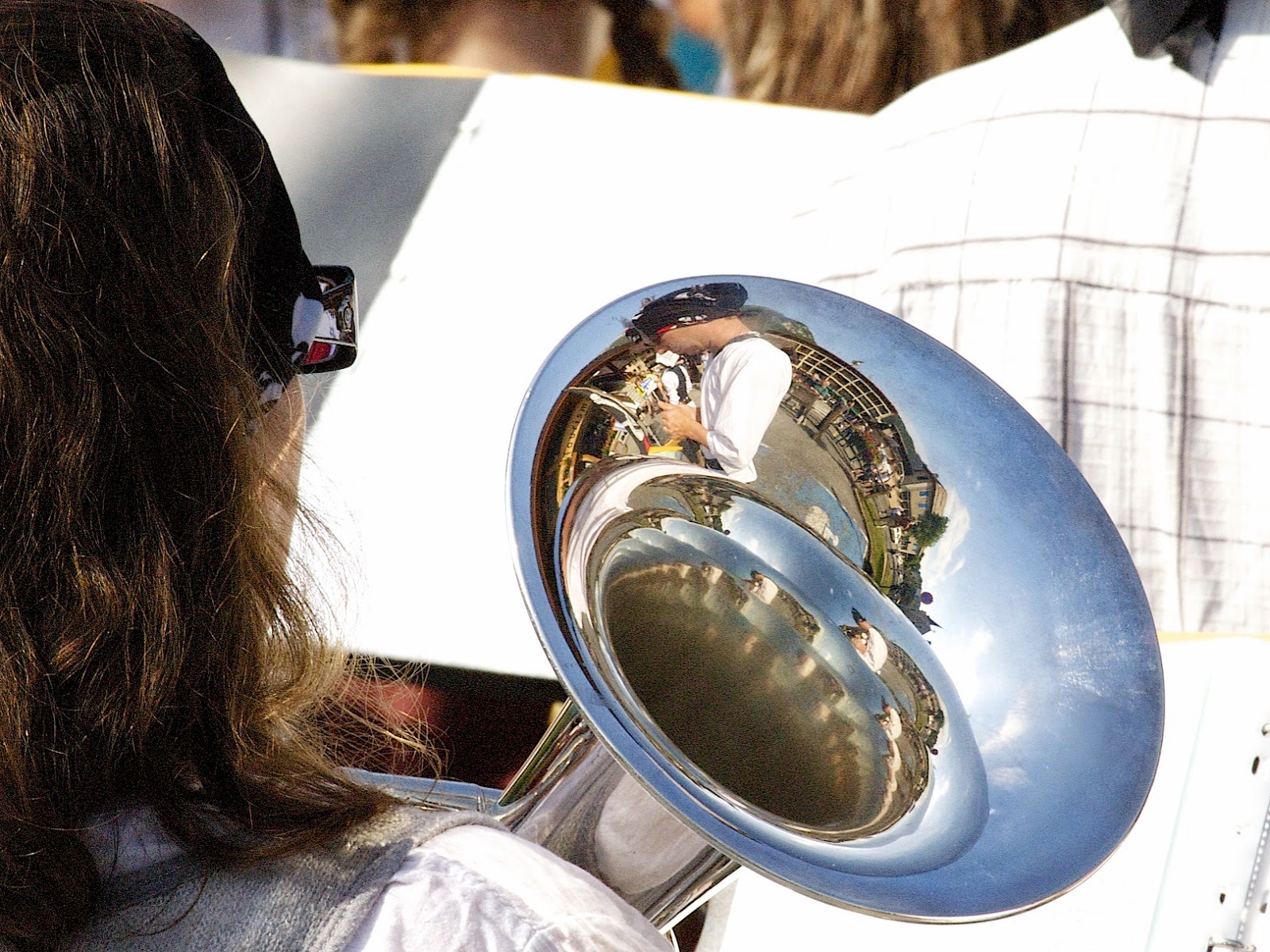 This is the 'other' band.  The band in white was dressed in a sort of pirate theme.  This band was a bit more rustic. 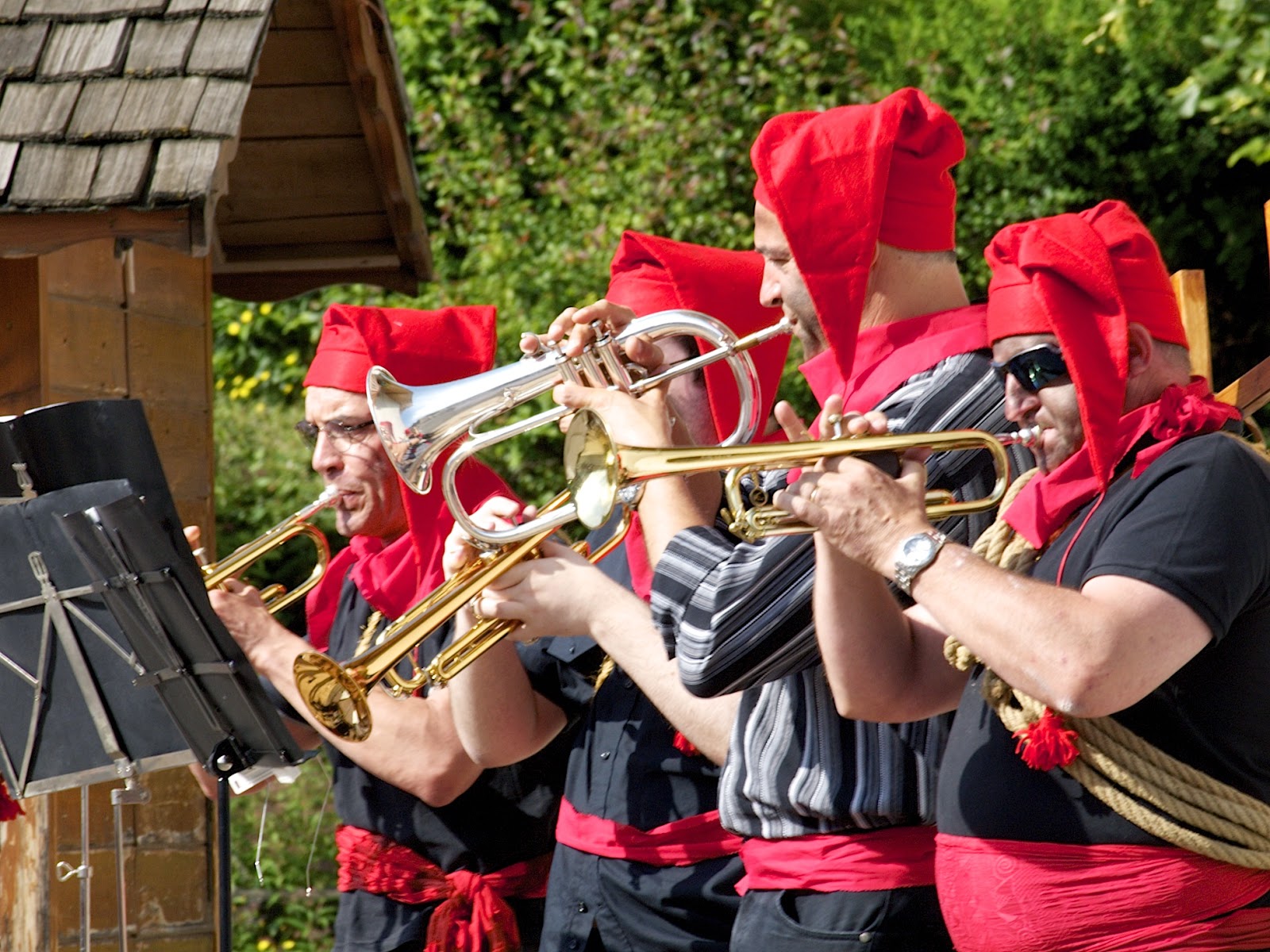 And now for Lyon, the city vs. the mountains.
The  date from the Ancient Romans.  Irenaeus, the first bishop of Lyon, lived during the second century A.D. and died around A.D. 202.  That is how long the Church has been vital in Lyon.  There are several areas where these old ruins remain visible. 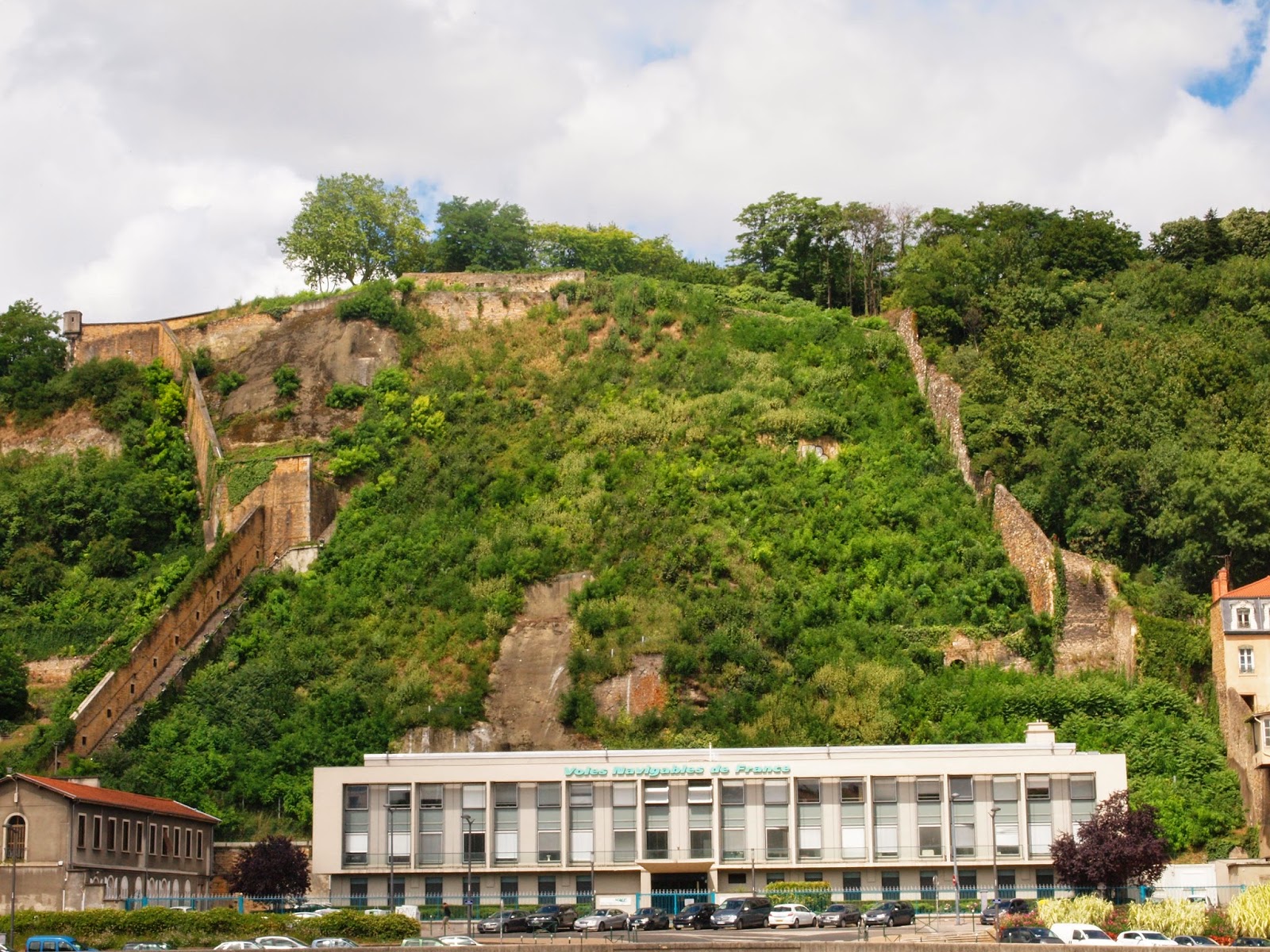 Flower boxes catching the sun on an otherwise shady street. 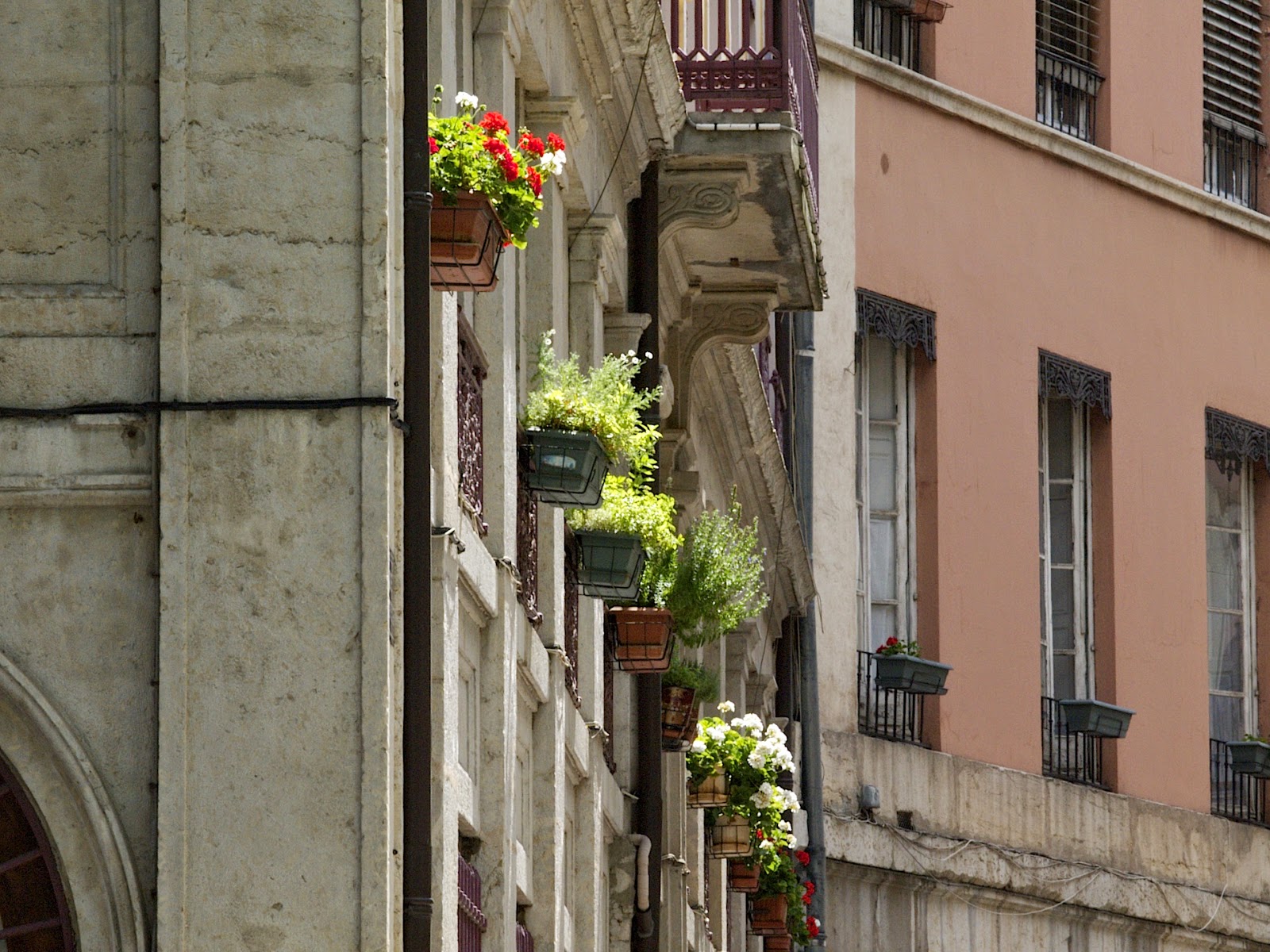 A tourist boat passing under a bridge on the Saone.  If you were to step on the bridge and turn to your right you would get off the bridge on our street about 200 hards to the east of the entrance. 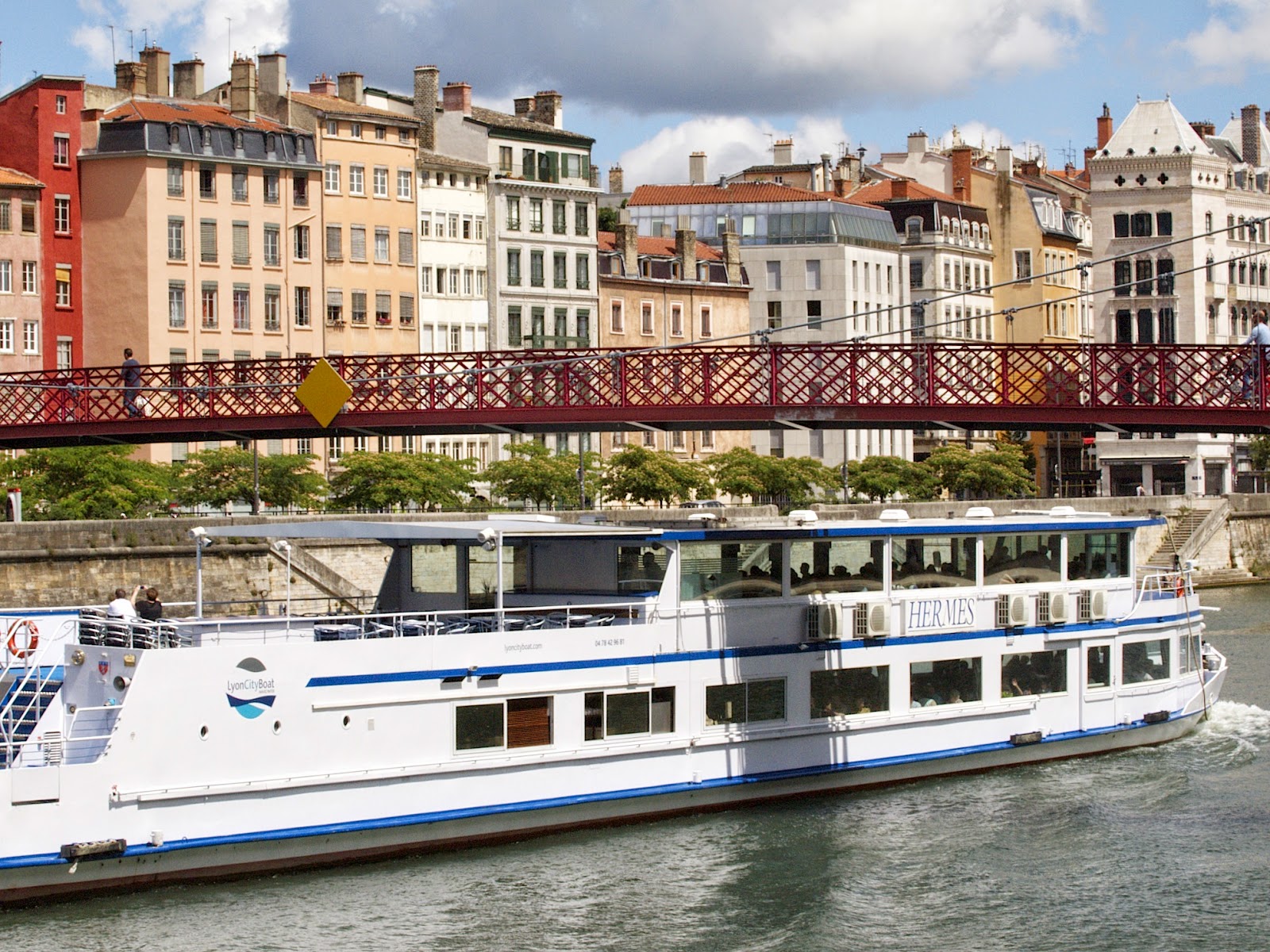 The same view without a bit farther down the river with a wider angle lens.  The morning began cloudy with a threat of rain but turned glorious some time during Mass at a church nearby. 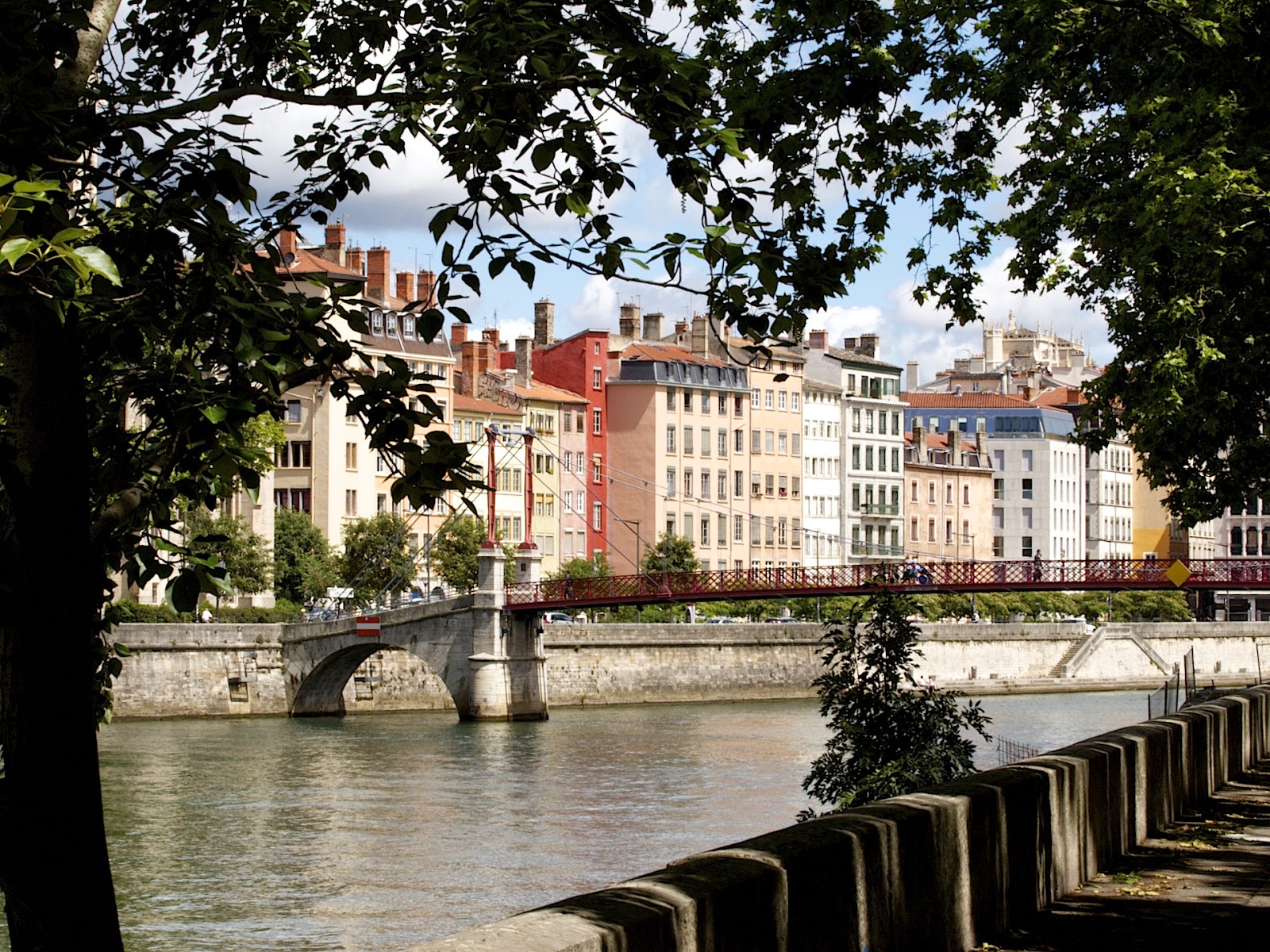 Very wide angle view of Fourviere.  The Basilica was built in the 1870's.  It is on the site of Irenaeus' see.  The steeple at the base of the hill is St. Georges where all Masses are in the extraordinary form. 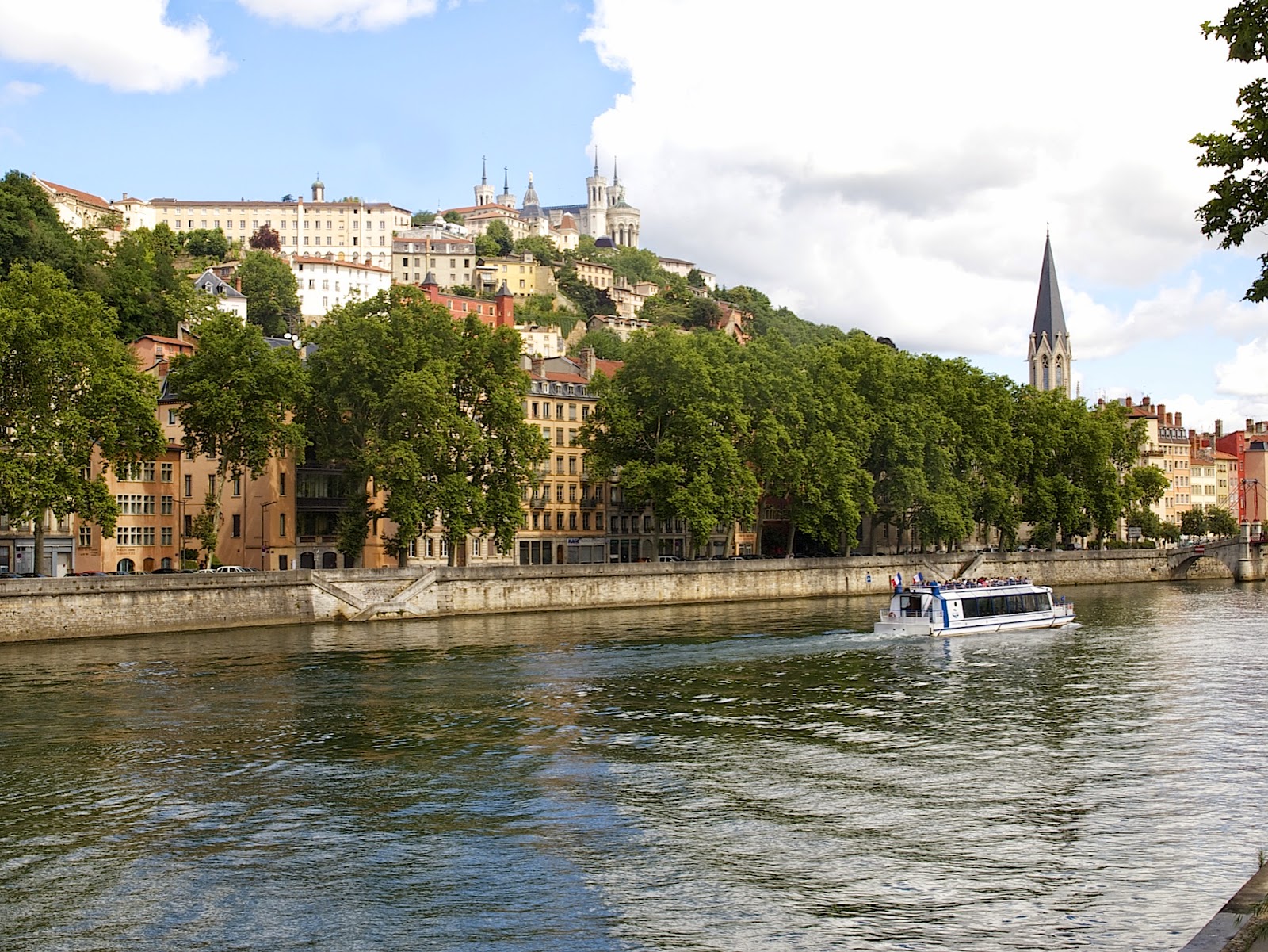