On the Fourth of July and Lyon

Fourth of July.
Tomorrow is the Fourth.  Indeed, as it is already 10 PM here (and 4 PM in Boston), it is very close.  From the looks of the weather forecasts I am happy to be in Lyon this summer.  I assume that the weather-tainment supplied by Jim Cantore standing in the wind on the Outer Banks telling us it is raining has already begun.

Over the years I had some great times on July 4 in Boston, both before and after entering the Society.   But, the security measures put into place since the bombing are so draconian that I doubt I will ever go again, unless they are lifted.  Closing all the bridges (Mass Ave, Longfellow, and the one by the museum of science) strikes me as asinine in the extreme.  With approximately 500,000 people in the general area of the Esplanade, closing the bridges will add nothing to safety.  While the Longfellow was generally packed due to its proximity to the Red Line, (it is currently under extensive renovation and is thus mostly closed) Mass Ave was a great bridge because there were few people on it.  For several years I watched the fireworks from the peak of the Mass Ave Bridge without having to fight crowds.  The fighting only began on the walk back to Cambridge.  One year a guy walking next to me in lock-step with the crowd muttered that he felt as if he were an extra in a disaster flick.  He nailed it.  With the bridges closed one cannot cross between the two towns anywhere near the fireworks.  Stupid.

As I look at the fear that dominates our lives, the bizarre security measures that are easy to circumvent (park guards at Independence Hall in Philly?) I think the bastards have already won.  Living one's life in fear is no way to live it.  That explains why I don't have any sun block to take to Africa.  Why worry?  I like Pope Francis' response to questions about his casual approach to security.   He said in effect that he doesn't have all that much time to live and has nothing to lose.  Worth meditating on.

I've come to like living in Lyon a lot.  The city reminds me of Boston.  Similar subway arrangement though much cleaner. It is cleaner because no one brings coffee, Dunkin' Donuts, or slurpies onboard.  There is nothing like having one's feet stick in the remnants of  lime slurpy on the Red Line.  (Not sure if slurpy has one r or two.  Spell check is of no help.)

The subway line that I take  here (green) runs every two to three minutes during the morning rush and only a bit less frequently at noon.  I haven't taken the subway much of late as I found it is only about ten minutes longer, and much more pleasant, to walk to and from school than it is to subway, which I only took one stop anyway.  Rain changes the equation.

The parking is even worse in Lyon than in Boston.  On Presqu'Il the streets are very very narrow and many are cobblestoned, including Rue Sala where we live There are parking garages but they are not always conveniently located and, I suspect they are expensive.
The arrangement of the streets in Lyon makes Boston look like a model of urban planning and efficiency.  'Nuff said?

I love the people.  They jaywalk and cross against the light with an avidity that makes a Bostonian immediately identify with them.  Don't walk sign on?  No car coming within 20 feet?  CROSS!  Curiously, the scooter seems to be a very popular way for adults to get around.  It is a bit odd to see a middle-aged man or woman in business attire zipping across Place Bellecour on a scooter.

Lyon, or at least our particular neighborhood, is very Catholic.  The Basilica Notre Dame de Lyon, is on the site that was the seat of St. Irenaeus, bishop of Lyon . . . . in the 3rd century.  Churches are quite filled on Sundays and the attendance at daily Mass at some of the places, including the two at the chapel in our house, is impressive.  And it isn't just the elderly, the infirm and the retired.  I will admit to almost losing my mind at Mass on Sunday at the church in Ainay, a few blocks from the community.  A very fecund congregation.  The church is a 12th century church in Romanesque style as opposed to gothic.  All stone.  The screams of babies echoing off those stones were uh, loud.  Acoustics are great but not for screaming children.  However it is good the kids are there.  As well as the younger kids and the teenagers who seemed to come in groups without parents, i.e. voluntarily.  There will be photos when I can get there outside of Mass.  It is open for tourists several hours per day.


To put things into a geographic context, this  is a shot of the Basilica taken from the peak of the bridge I cross to and from school. 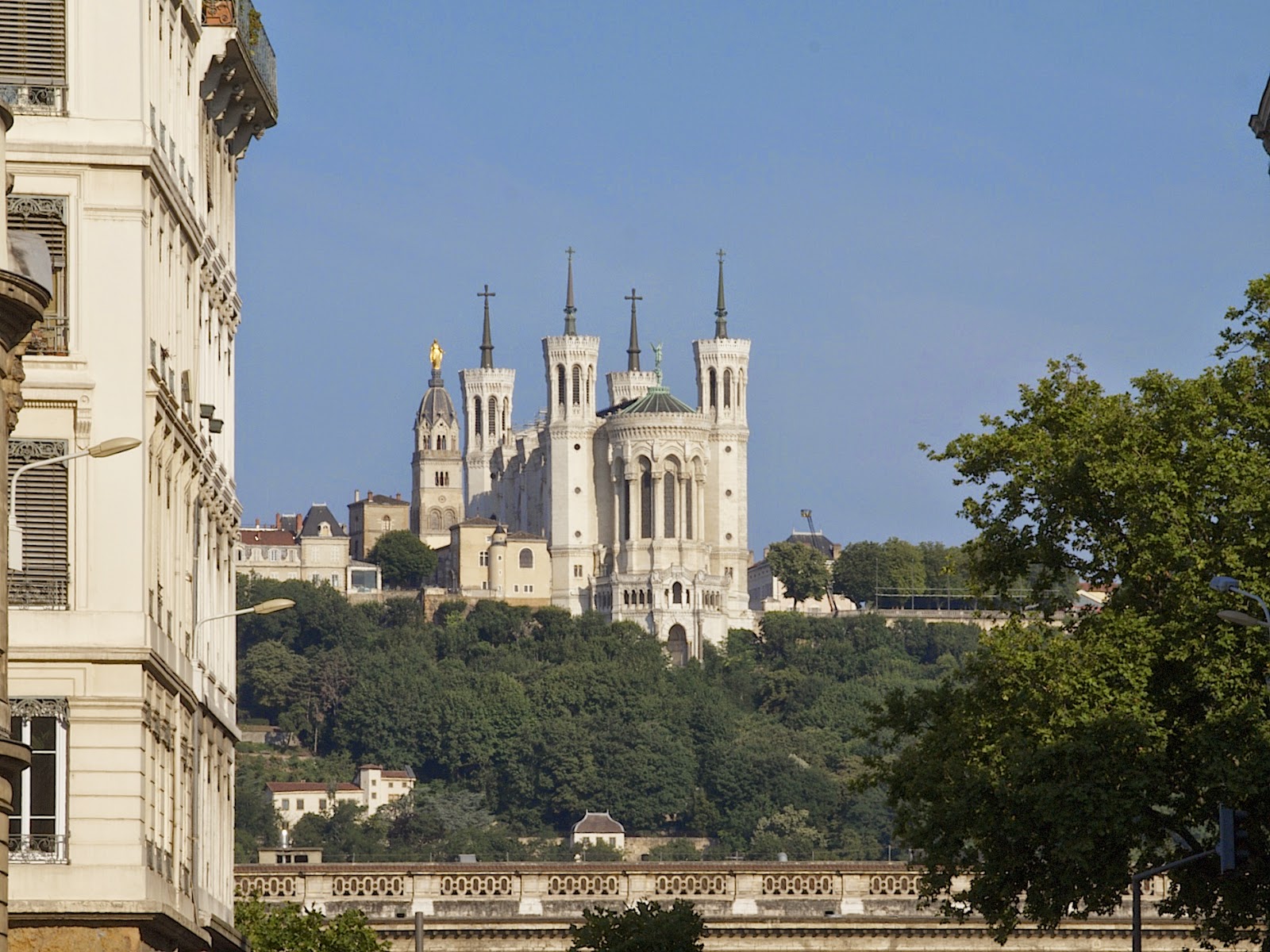 Heading to school I cross over this esplanade.  It is heavily trafficked with bicycles during the morning. 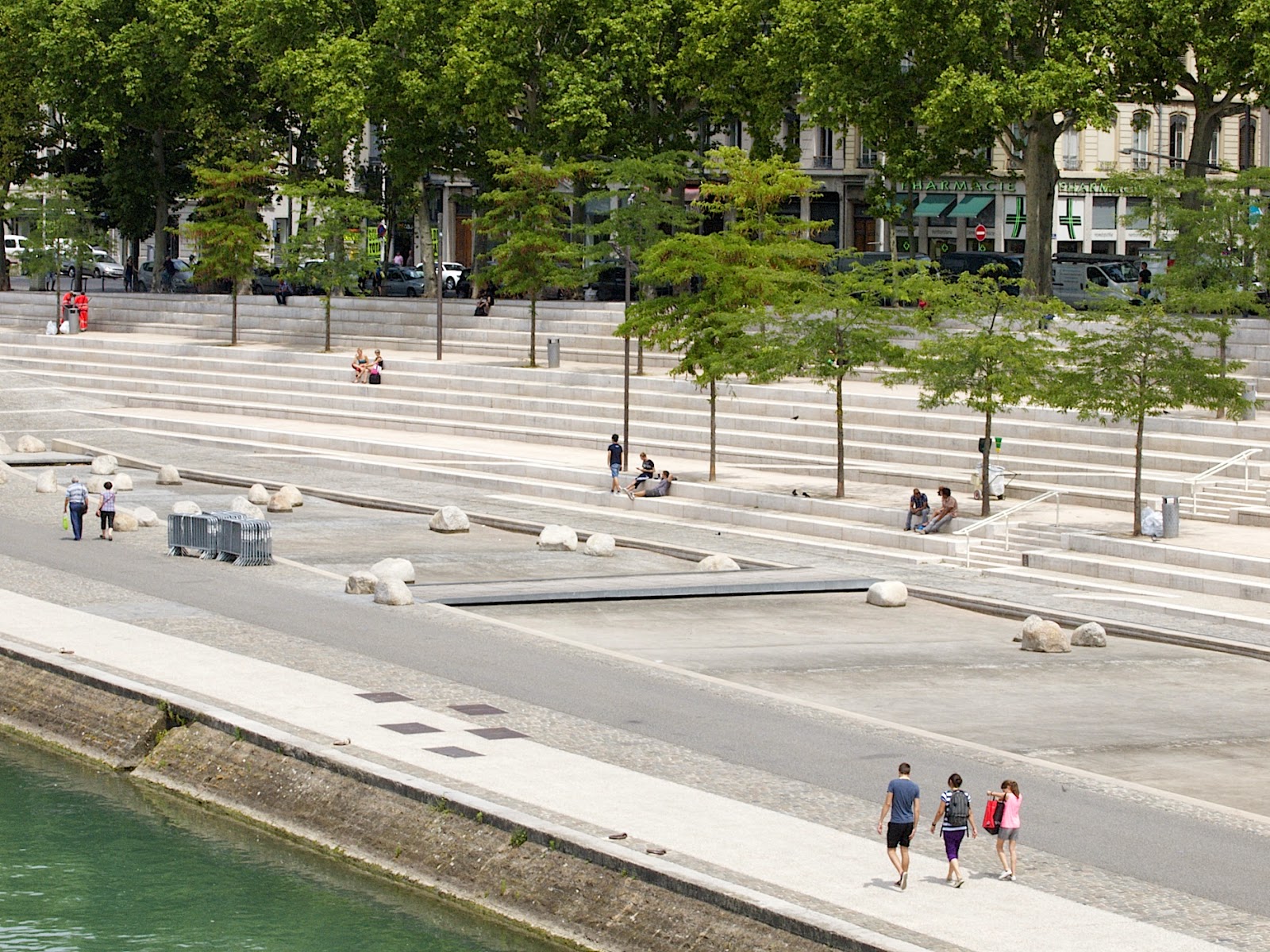 The view of the city from the grounds of the Basilica is terrific. 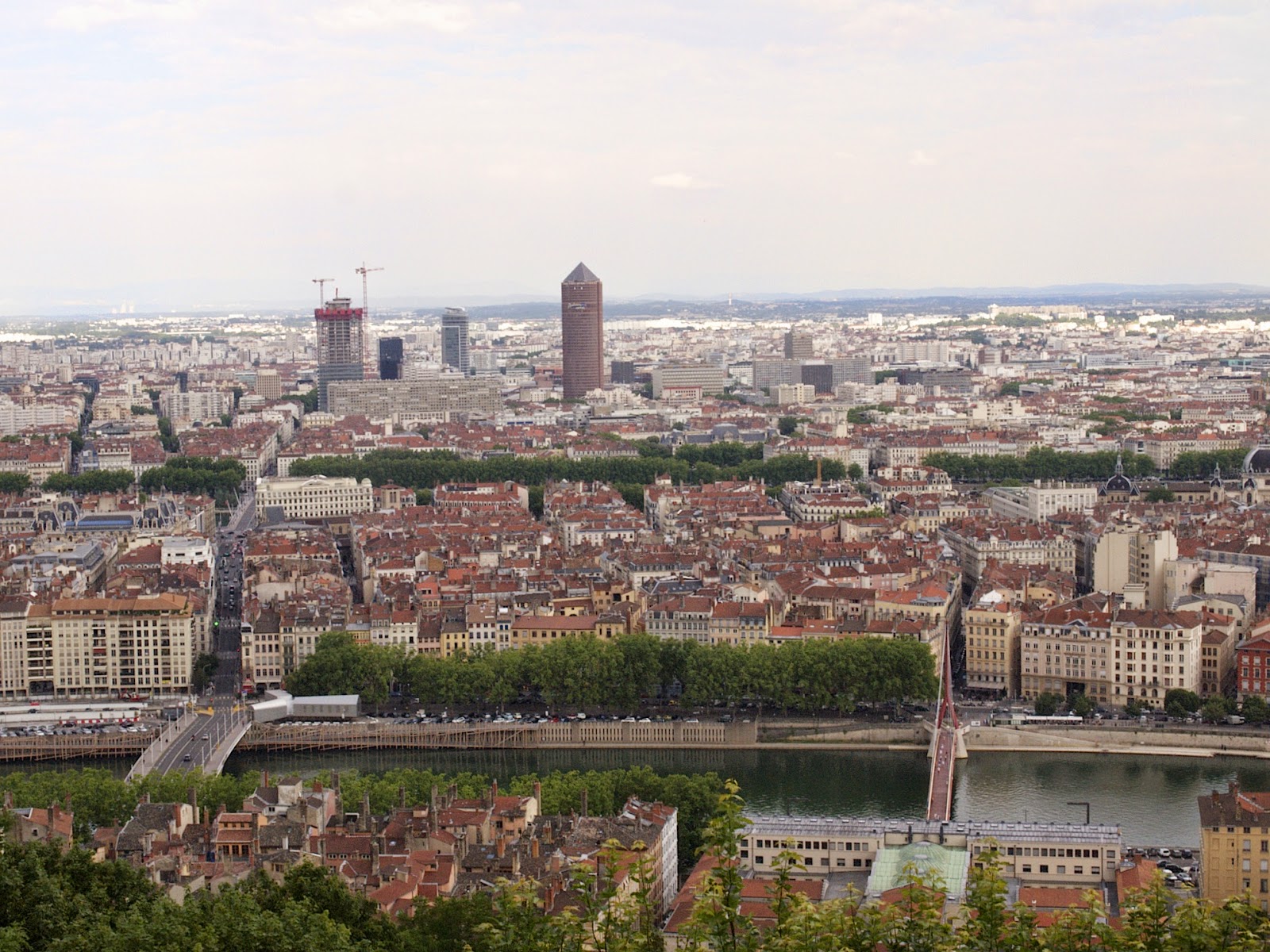 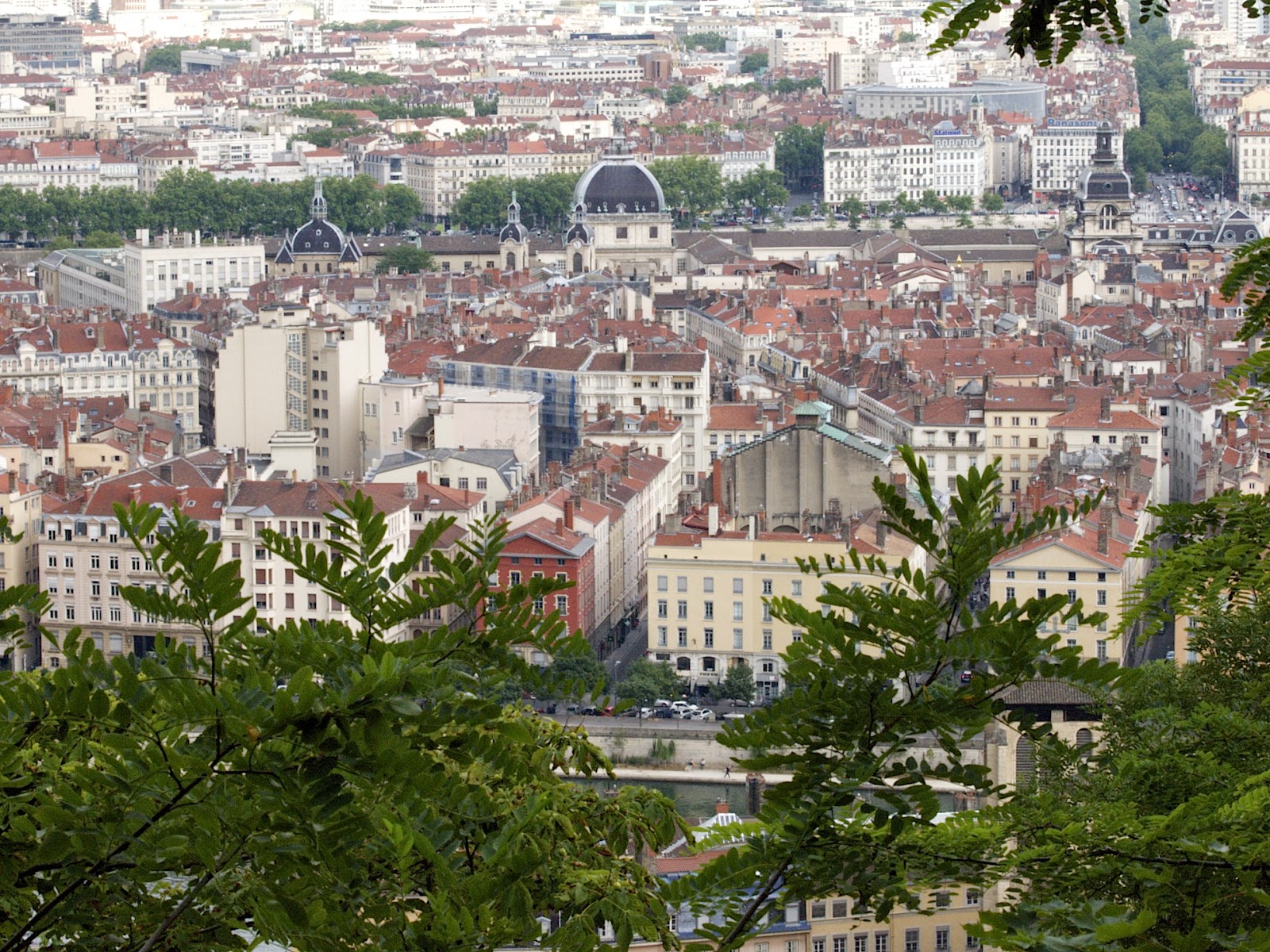 Some detail of the rooftops of the neighborhood near the school. 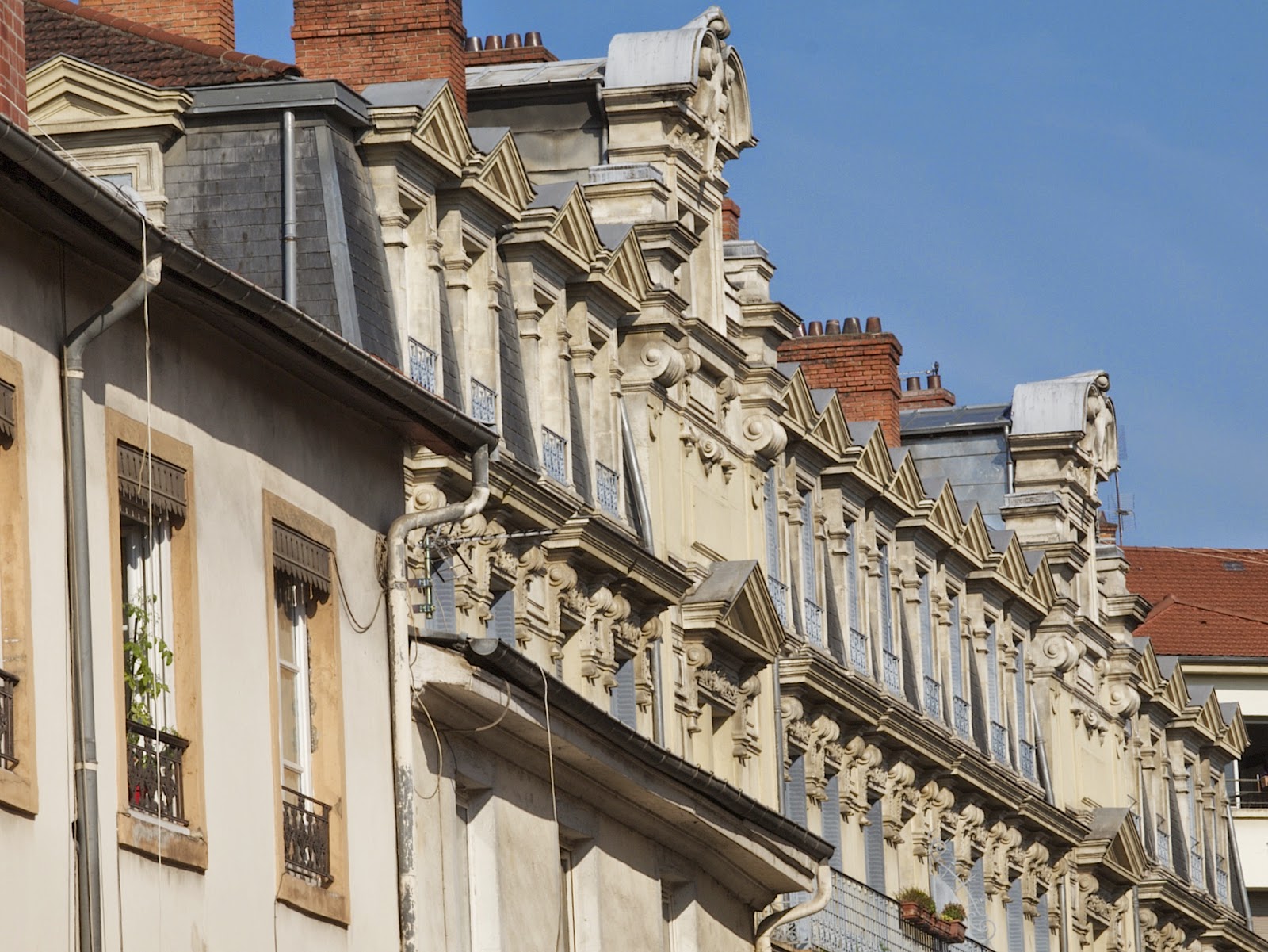 These shots are from the crypt chapel below the main chapel in the Basilica. The first was shot from the steps leading down into the crypt. 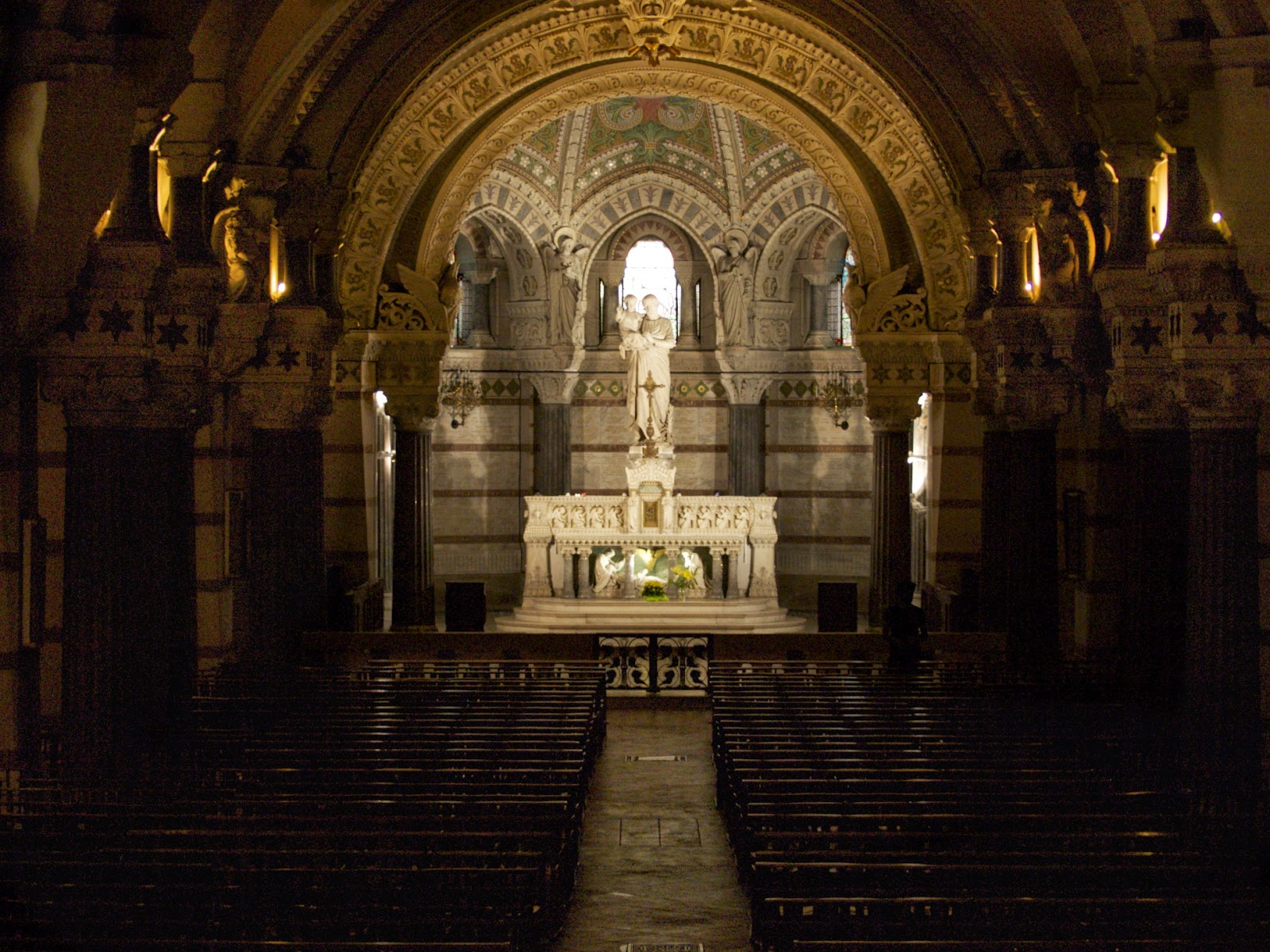 A detail of the fresco over the altar in the crypt chapel. 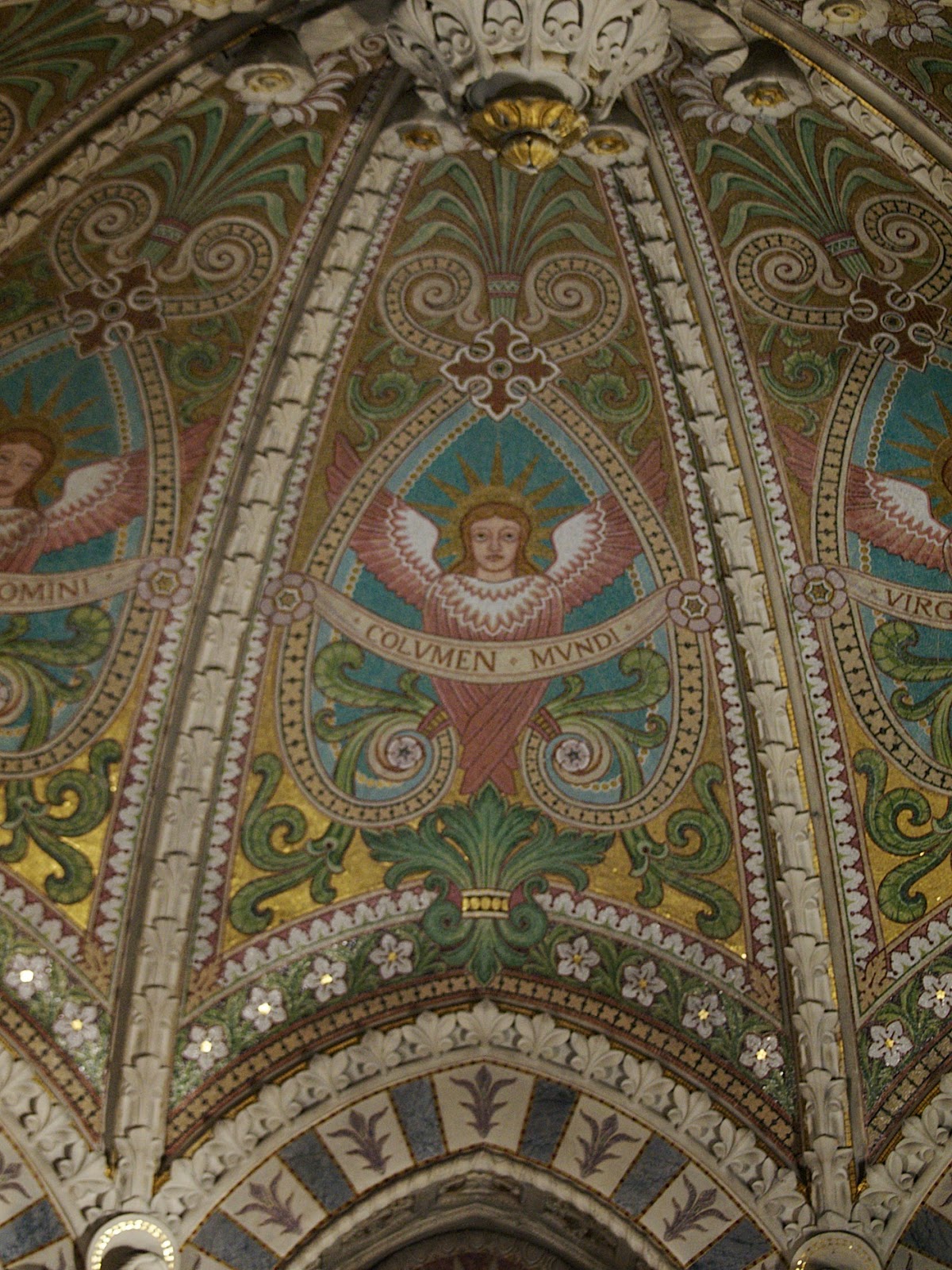 I am fascinated with taking photos of candles.  Note the bit of burning wax dripping from the candle that bent from the heat of the candles surrounding it. 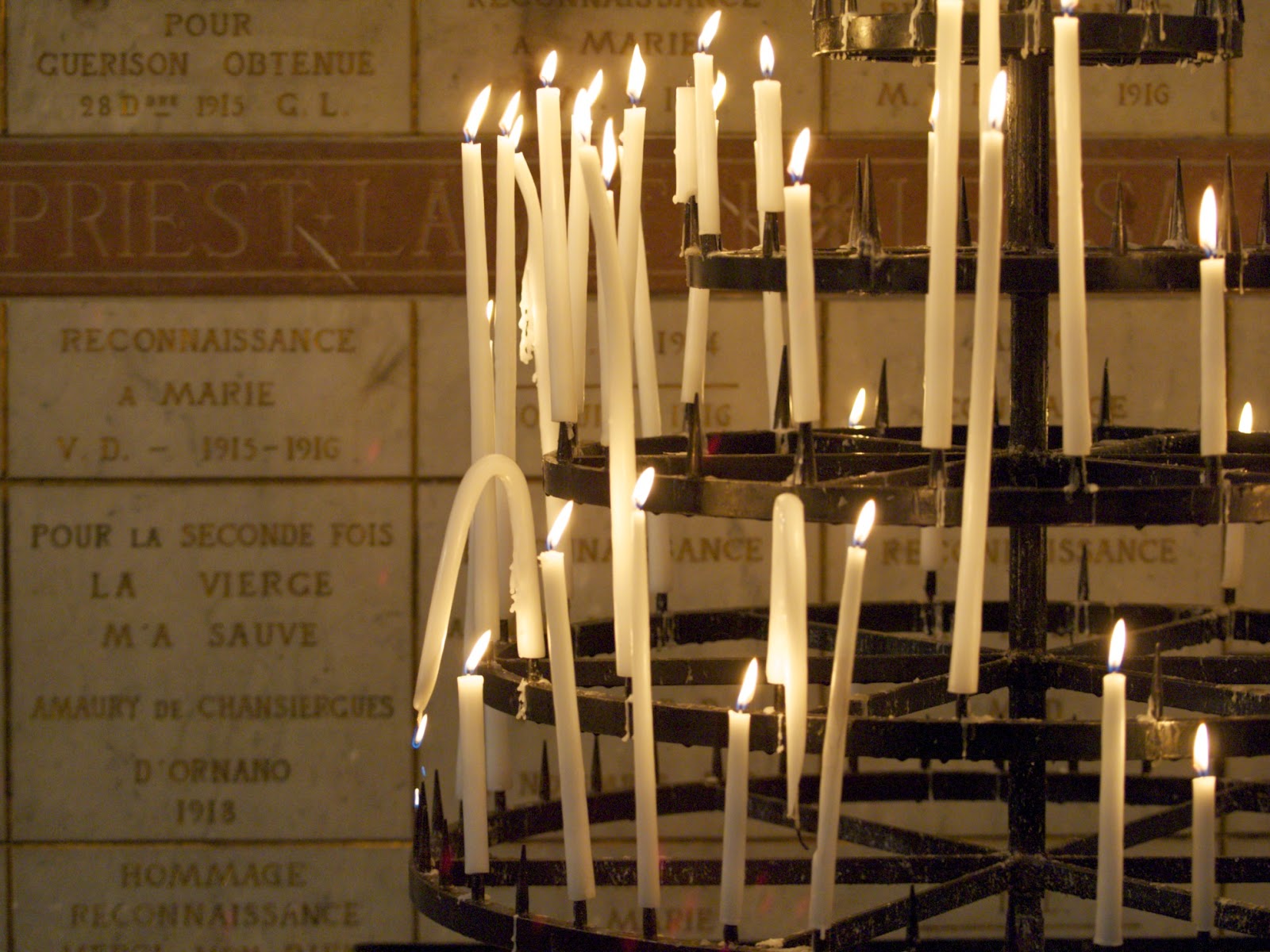 A woman lighting a votive candle from a taper.  There is a taper in each candle stand for lighting other candles.  Much better than striking matches. 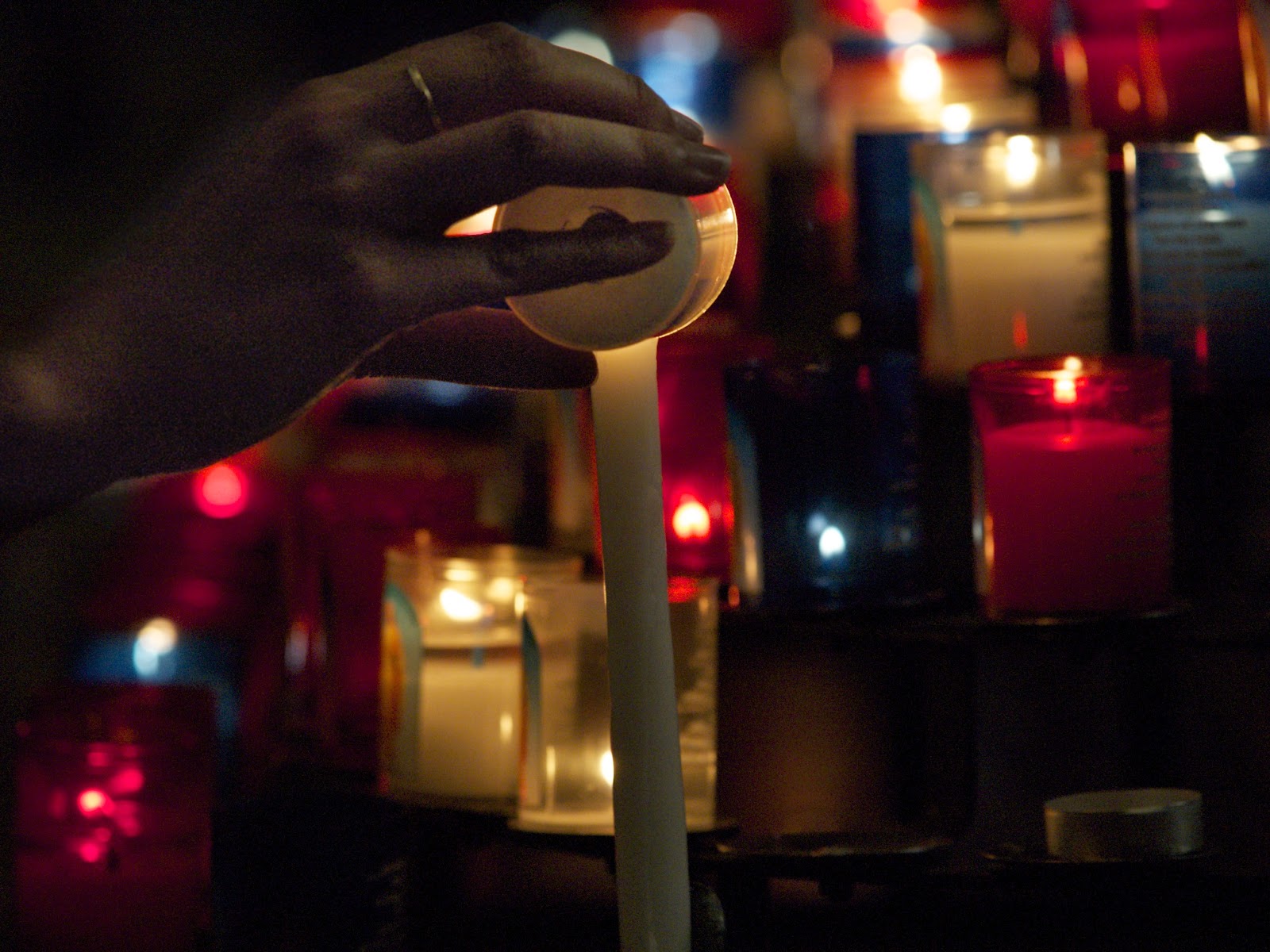 A woman lighting a taper in the daily Mass chapel that is under the statue of the Immaculate Conception. 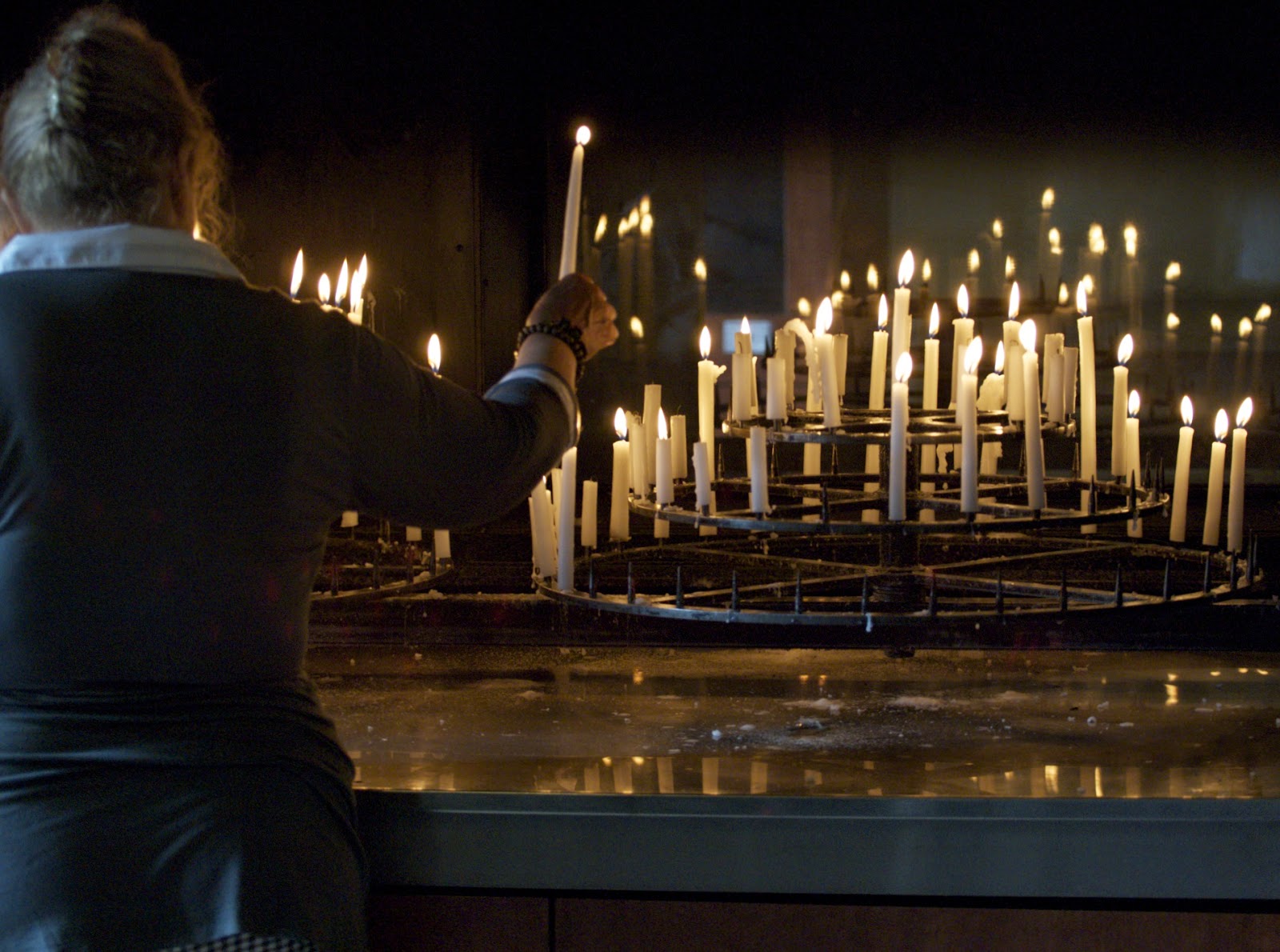 One photo of the main altar in the main body of the Basilica.  The lights surrounding it are electric. 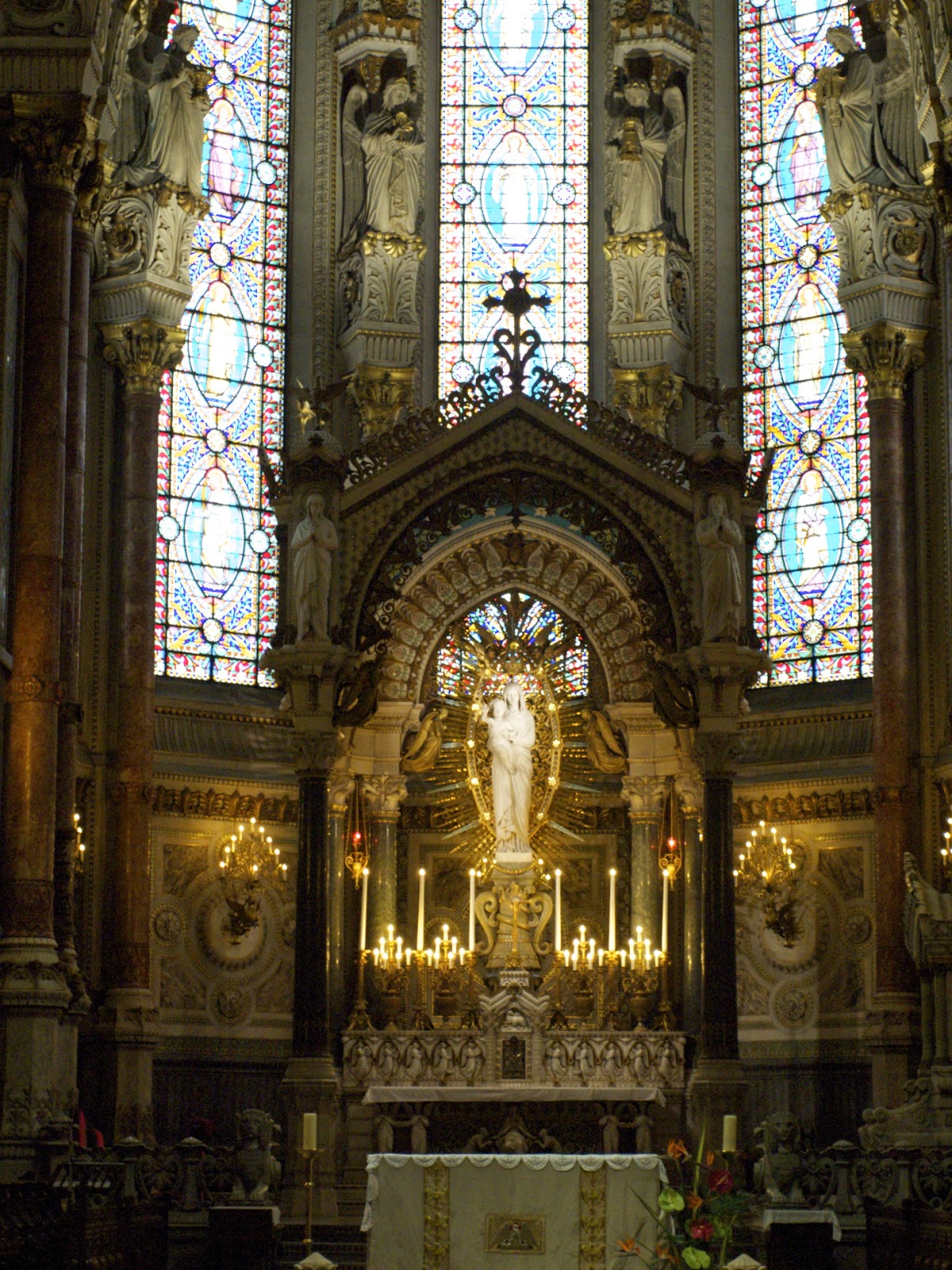 A side altar in the crypt.