Today is my last day in Lyon.  Tuesday AM I catch a train back to Charles de Gaulle airport for the flight to Chad.

It was a good two months.  I know a lot more French than I did when I arrived.  That is something of a relative statement because I knew none when I got here.  Depending on the type and speed of the conversation I can understand sometimes more and sometime less.  Speaking is serviceable though the verbs are something more than a challenge.  Won't describe the agony of trying to write.  In French, for example with the verbs, a word may be pronounced the same way in three different tenses but be spelled differently with an unpronounced 's' here a purposeless 't' there, or a silent 'ent' at the end of a third-person plural verb.  Who came up with those rules?  In retrospect I realize the best decision I made at Plymouth High School was to take Latin with the fearsome (and terrific) Agnes Curran than French with the rather more relaxed French teacher.   As the options were limited to French or Latin it was not the most difficult of choices.  Any kid who wanted to go to med school that Latin was important.  And, in fact, it was and remains so.

I am grateful to the community for hosting me.  I cannot imagine being in a better location in Lyon.  We are down to a skeleton community now.  France takes summer vacation very seriously.  Very seriously.  The French get FIVE weeks of paid vacation per year.  There will be six (of about 20) at lunch today, a few of whom are only here only on weekends from ministries farther afield.

There was a gathering of youth here over the weekend.  They left after Mass for a pilgrimage to Lourdes.  The director asked me to take some photos.  Attached are a few that I took yesterday of the gathering (not the people but other things) and some I took while wandering about Lyon.  Managed to get to the supermarket for some toothpaste and other necessities between a massive early in the day thunderstorm and a less impressive downpour in the afternoon.  Got back into the house about one minute before the second rain began.  Today, Sunday is lovely.  It is sunny, clear and cool without humidity.  This afternoon I have to pack, straighten my room and deal with a few administrative things.  Overall I think I'd rather study French verbs.

Not sure what or if I'll be posting from Chad.  Internet accessibility may not be consistent.  Will be taking photos and storing on computer.
___________________________________________________
Went up to the Basilica for Mass a few days ago.  The close up of the steeple reveals the detailed stone work.  After thinking about it I much prefer the crypt chapel to the main church.  The crypt is quiet and understated.  The main church is a visual assault.  There is too much there ranging from the lights to the colors and even to the space.  The main chapel is higher than it is wide.  It feels oddly claustrophobic.  Photos of both on an earlier post. 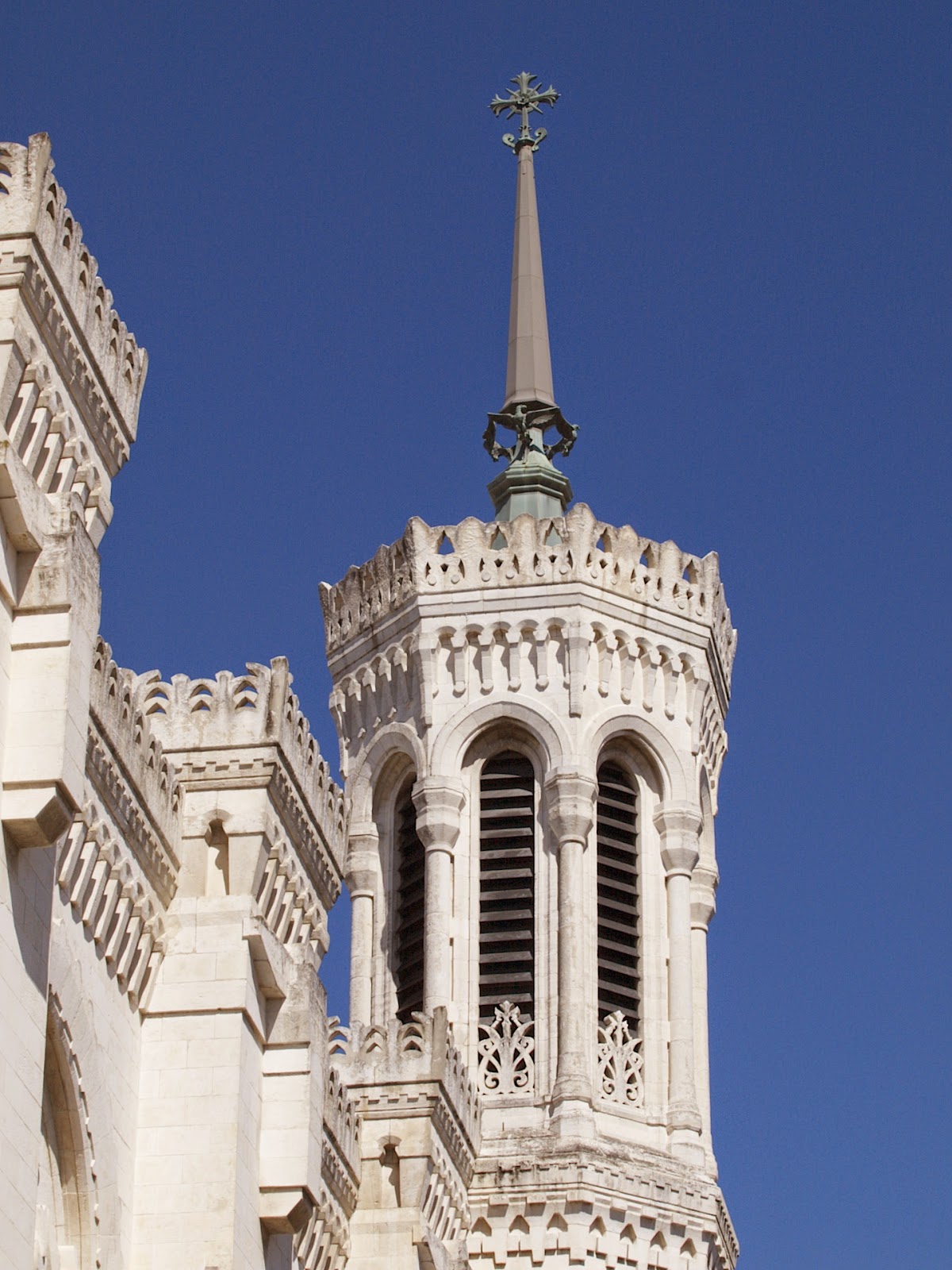 The view of Lyon, mostly Presqu'ile, is impressive. 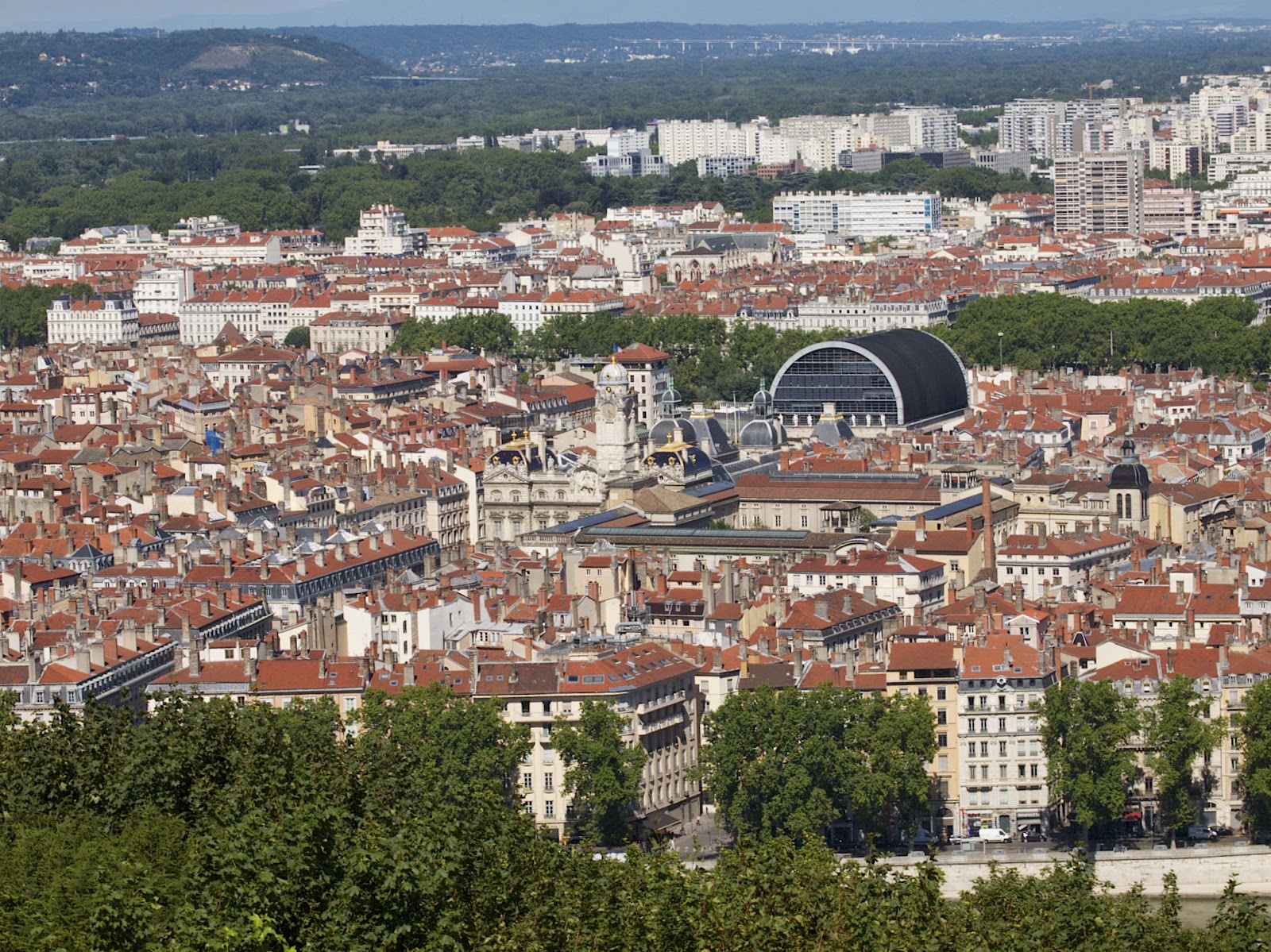 Simple table decorations for Saturday's lunch.  Everything for decorating was taken from the garden. 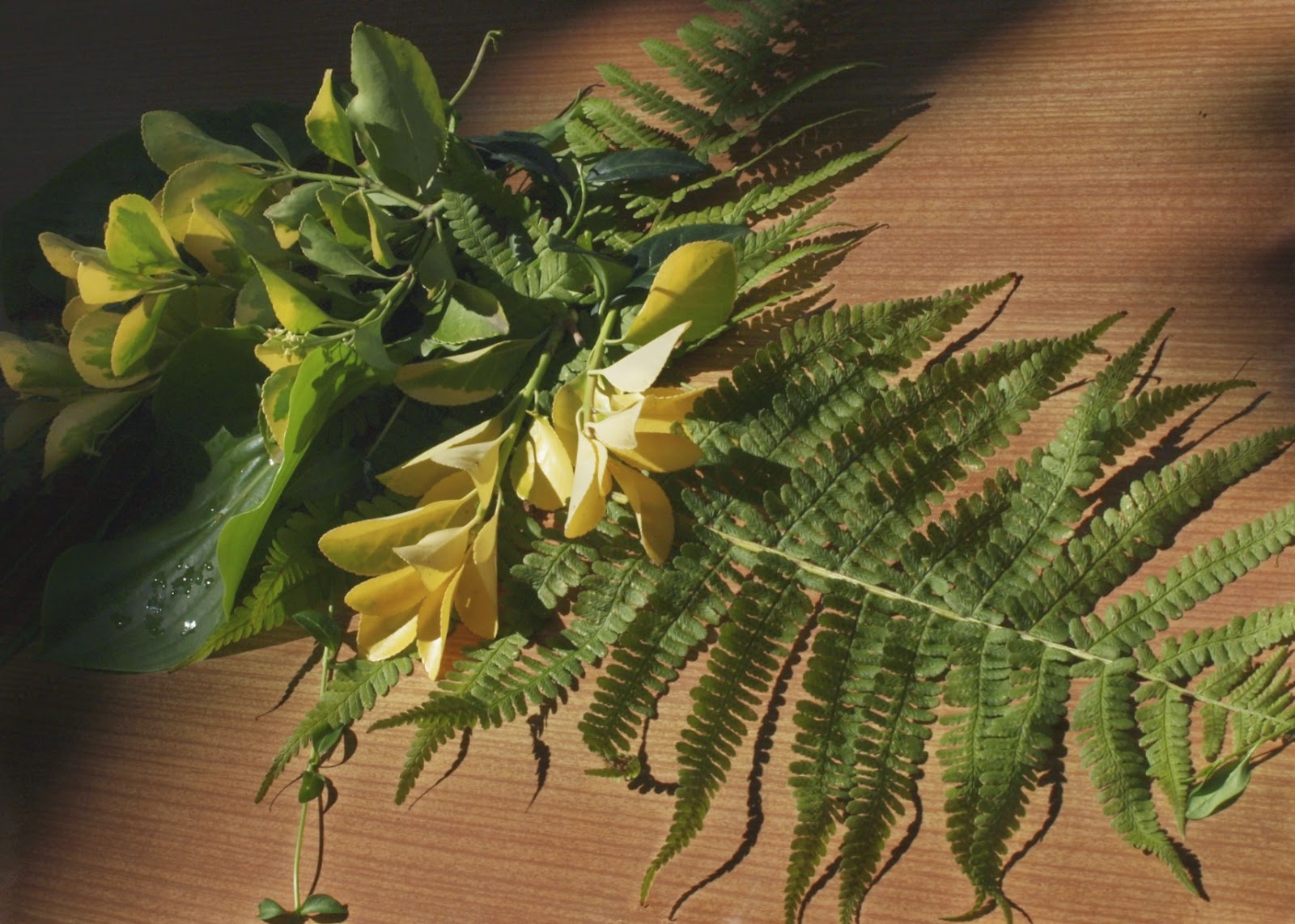 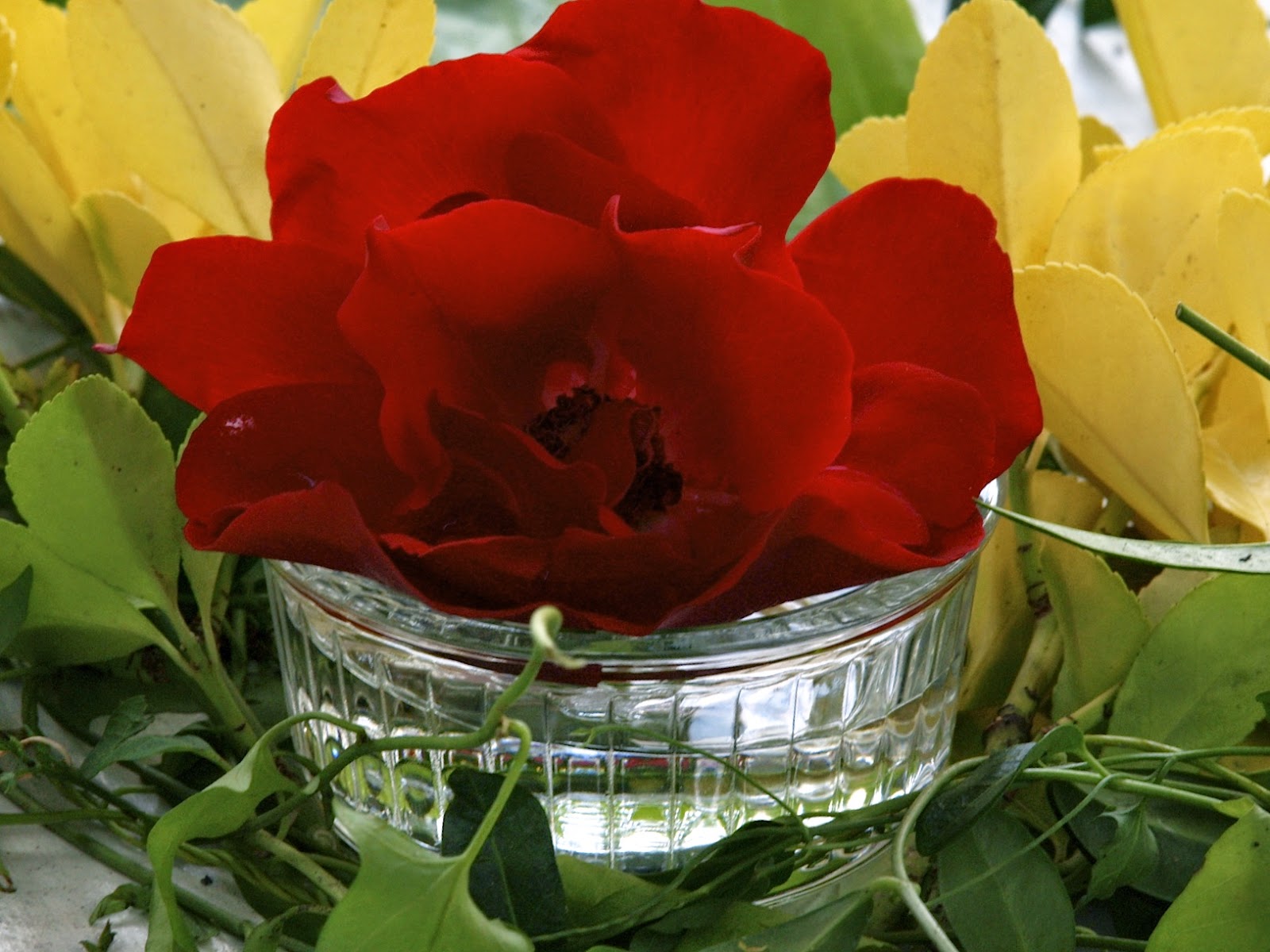 Lunch ready to be served. 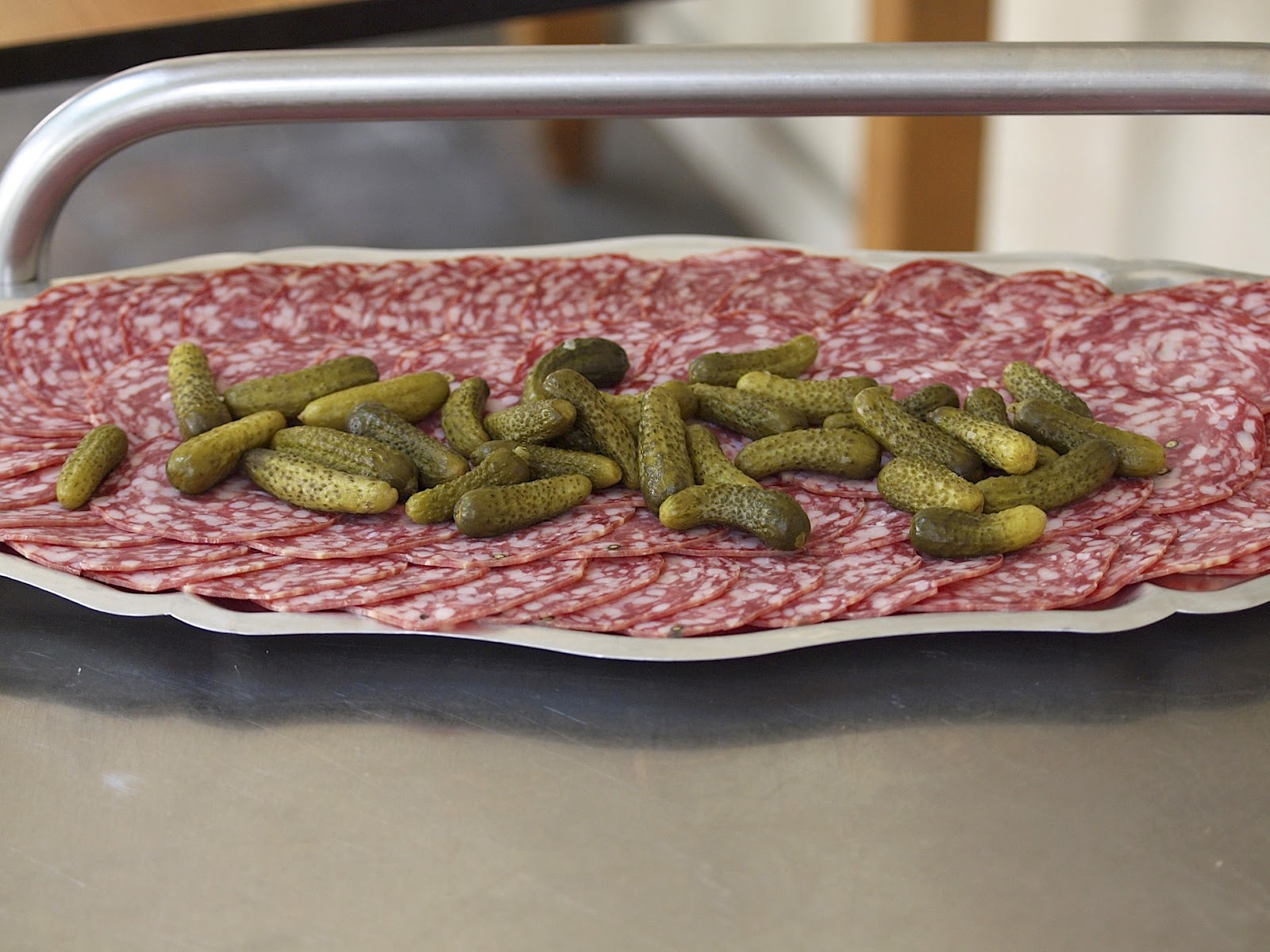 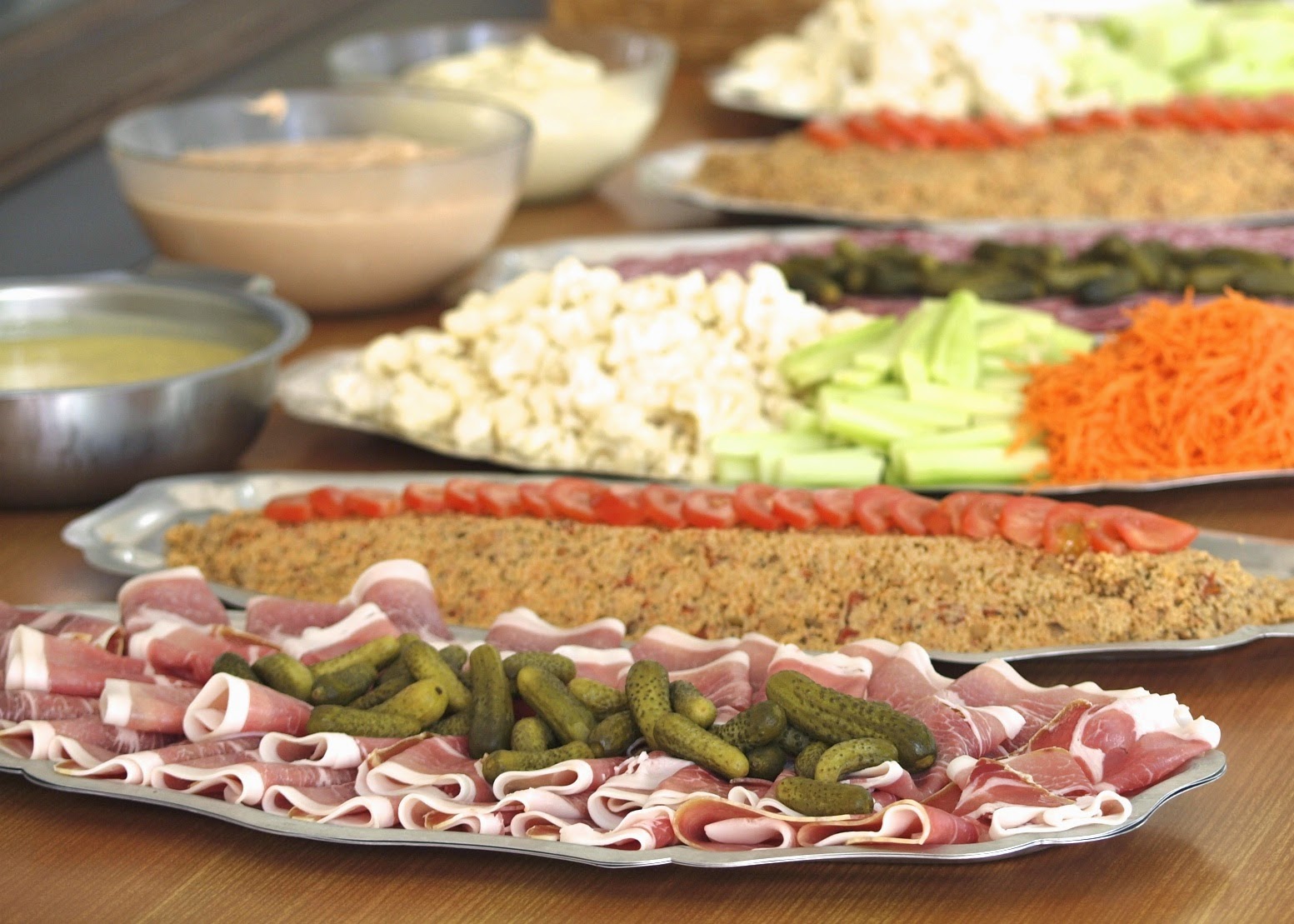 Desert was simple, brie with fresh apricots.  I like the contrast of the creamy white cheese and the apricots that seem illuminated from within. 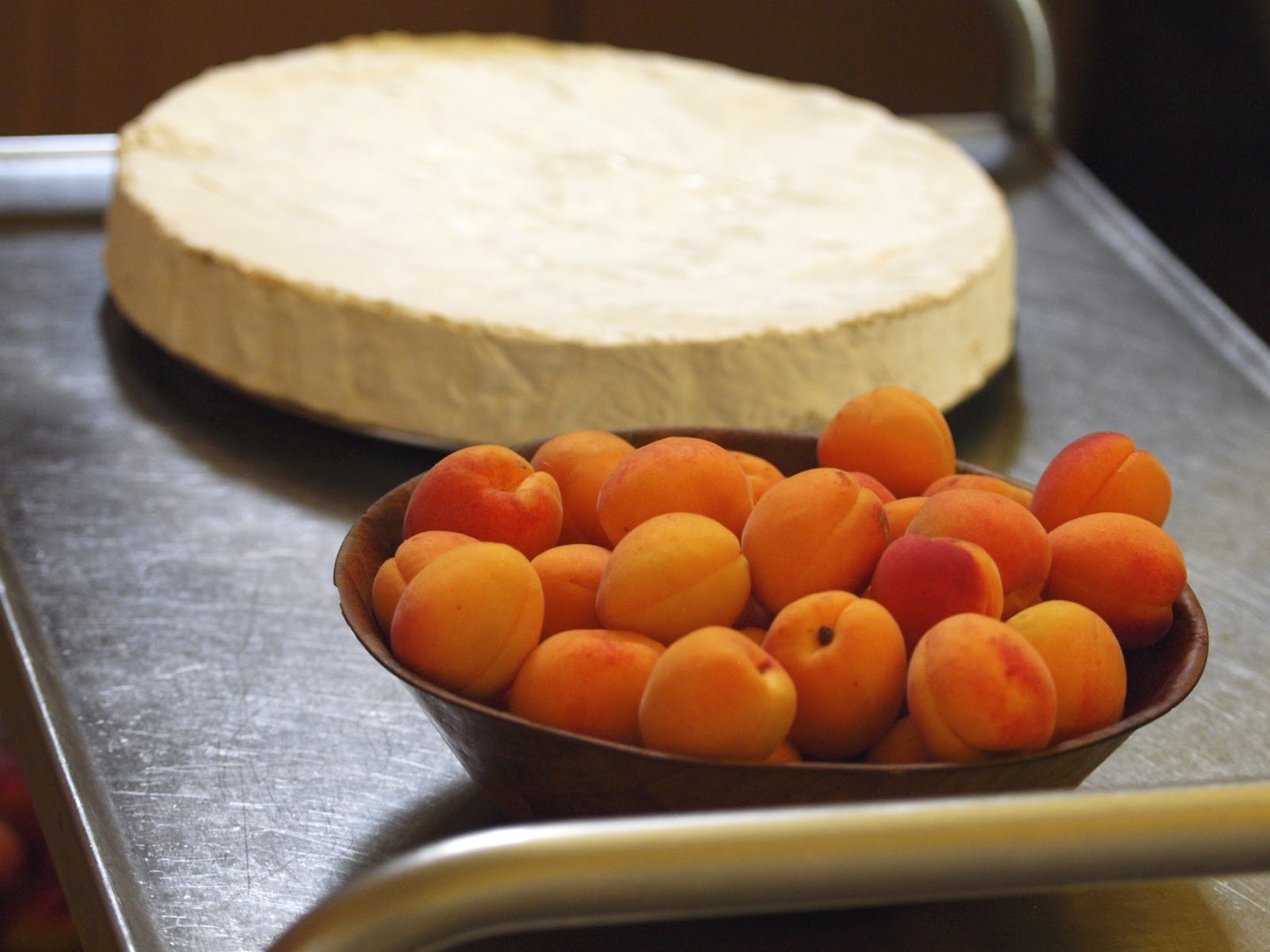 After lunch I went to the supermarket.  To get there involved walking through the transportation hub at Perrache, about 1/2 mile straight shot down Rue Victor Hugo.  Huge building, actually two connected ones, where one can catch bus, train, or subway.  And park.  And do some shopping.  The light feature was interesting with lights that illuminate in an irregular pattern.  First the outside. 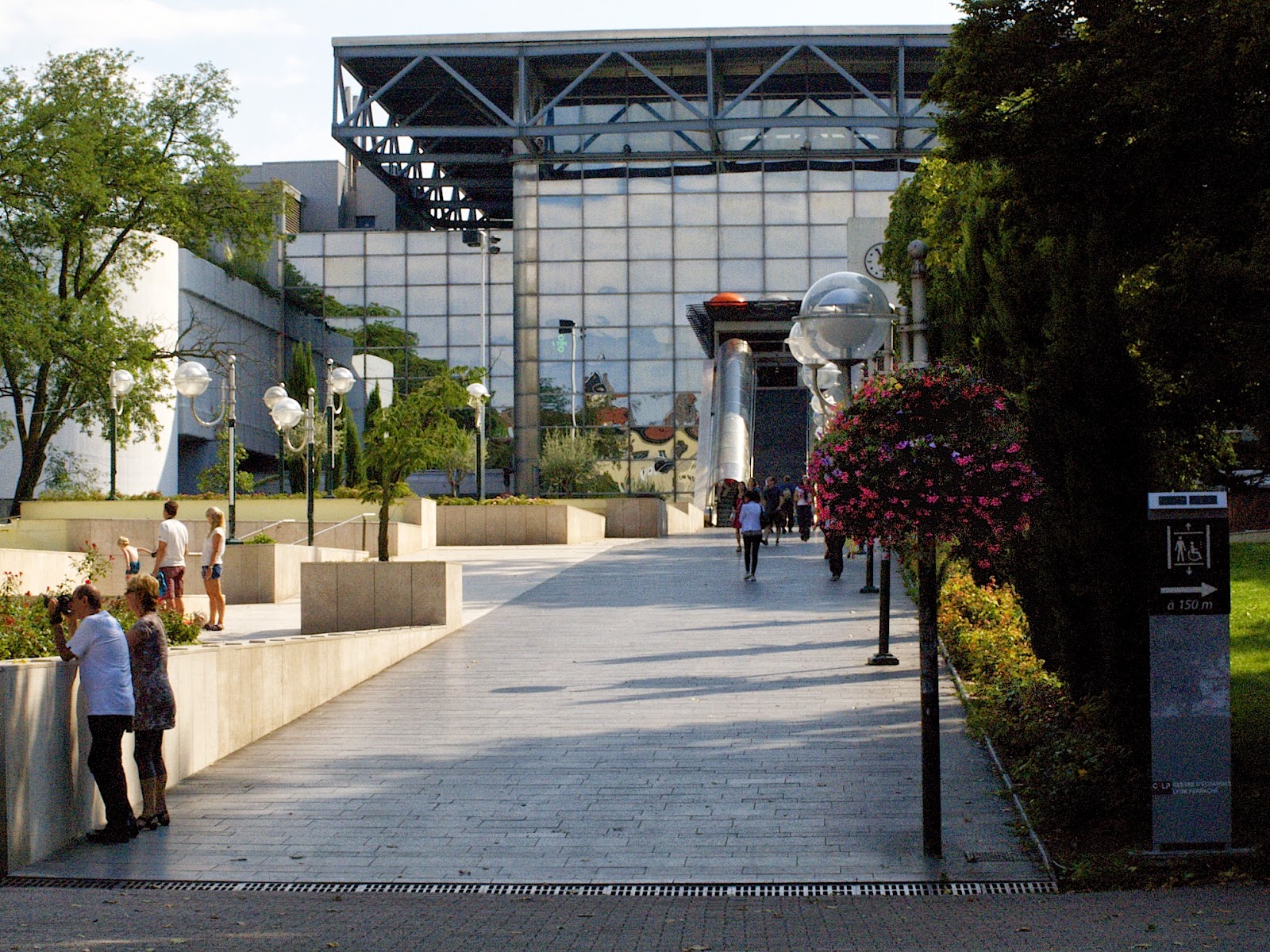 A close up of one of the hanging baskets on the approach. 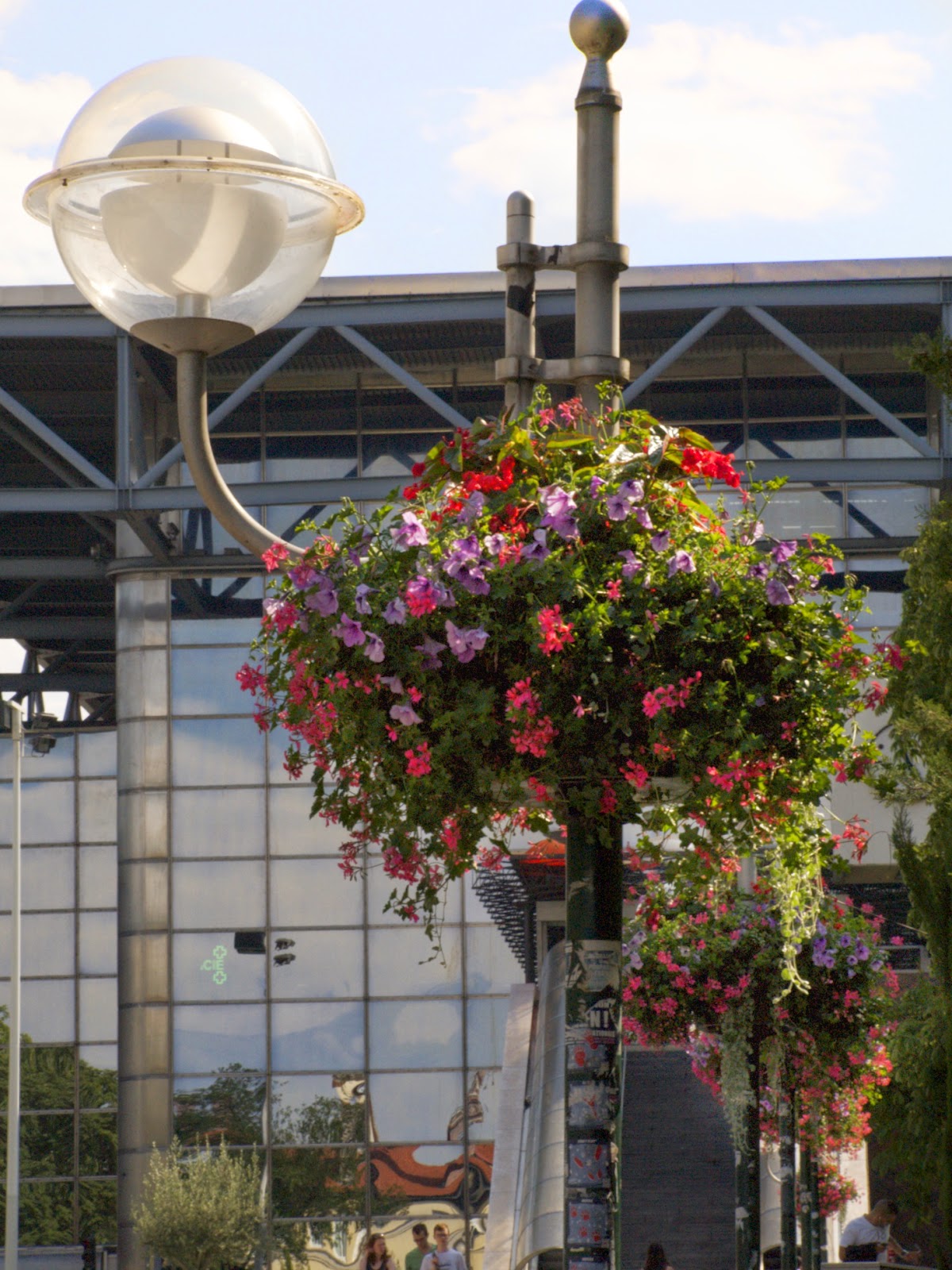 The light feature in two different states of illumination.  The lights changed very fast.  The photos were like taking fireworks.  Shoot and hope for the best. 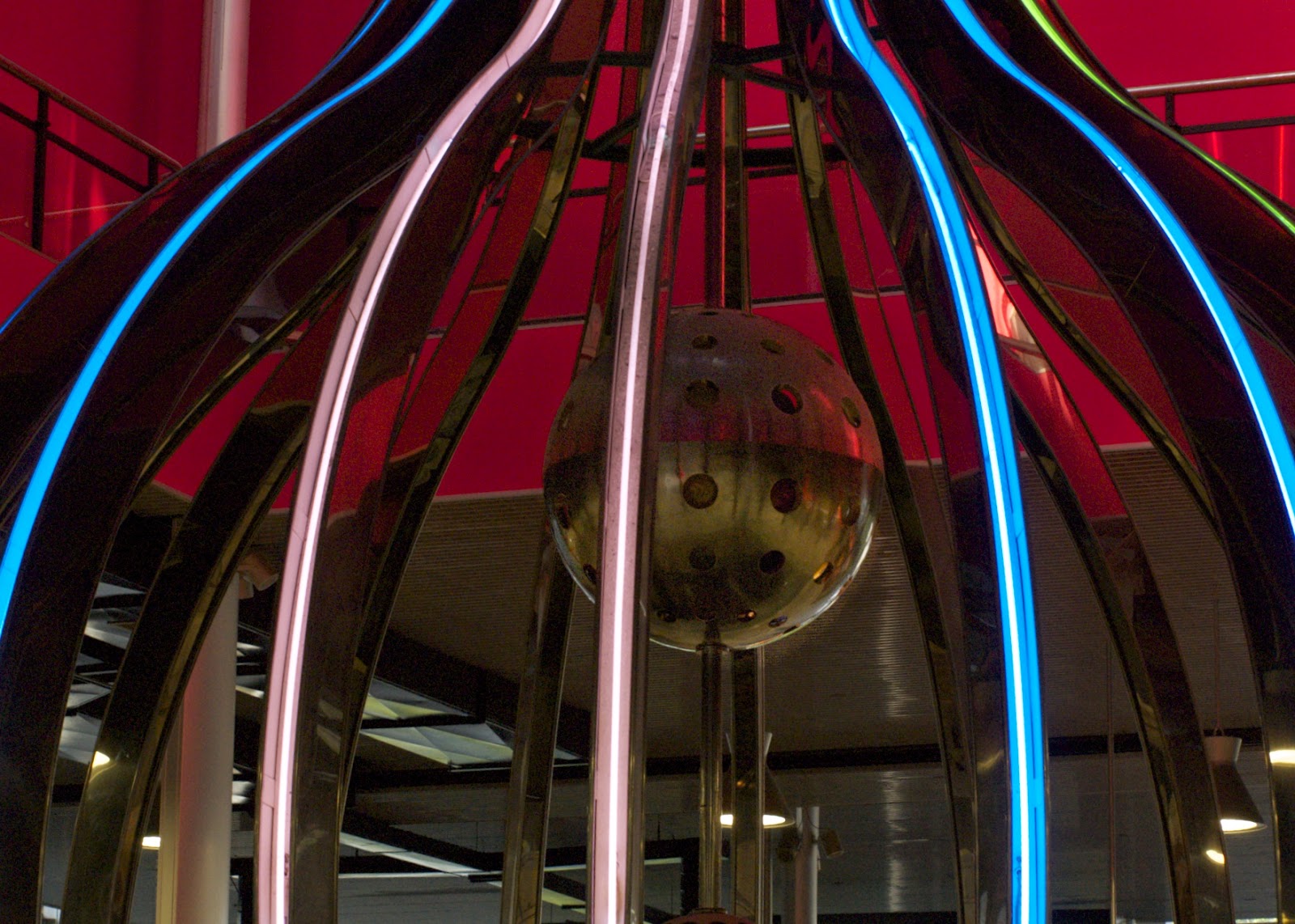 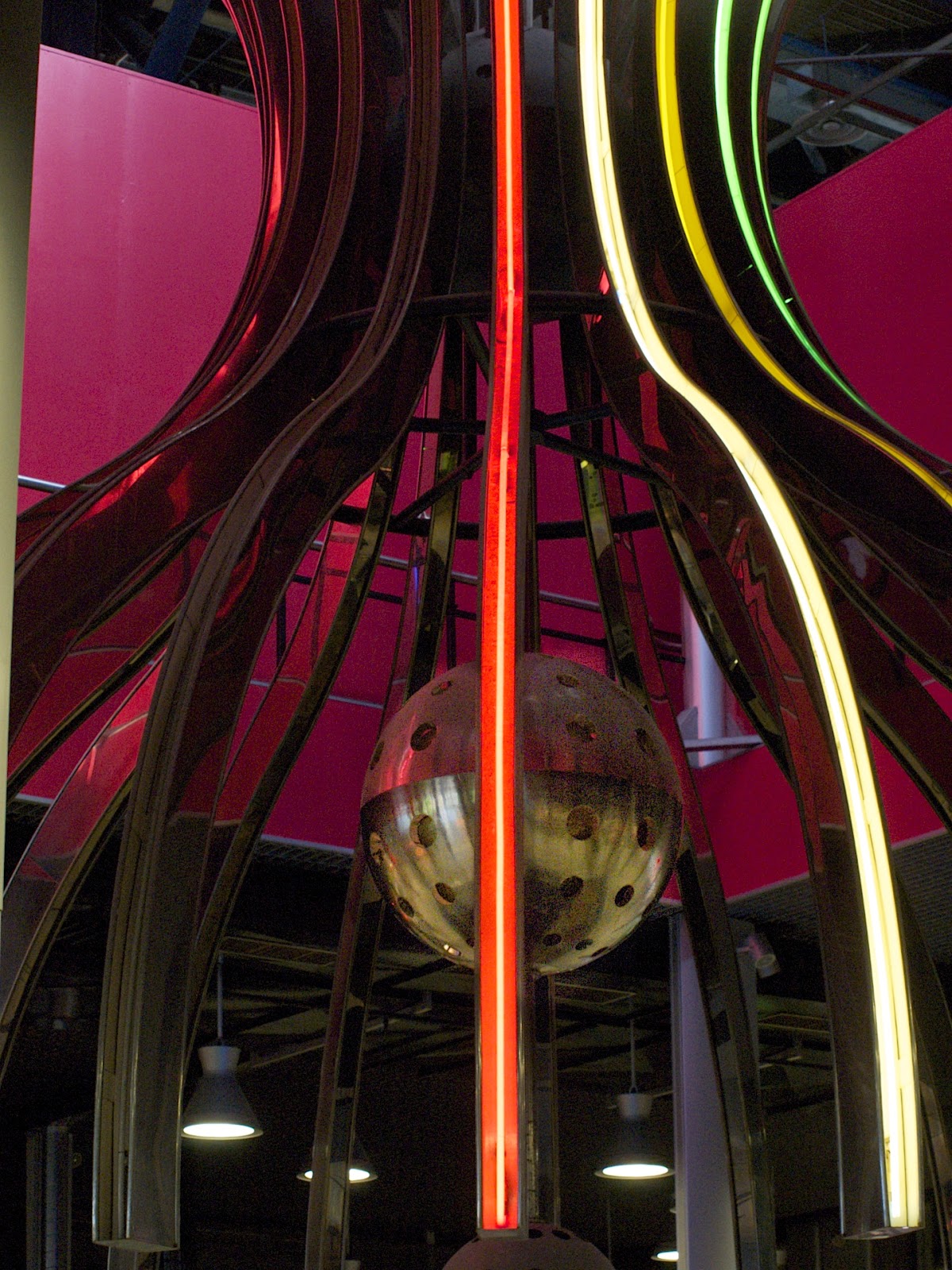 And the railroad tracks. 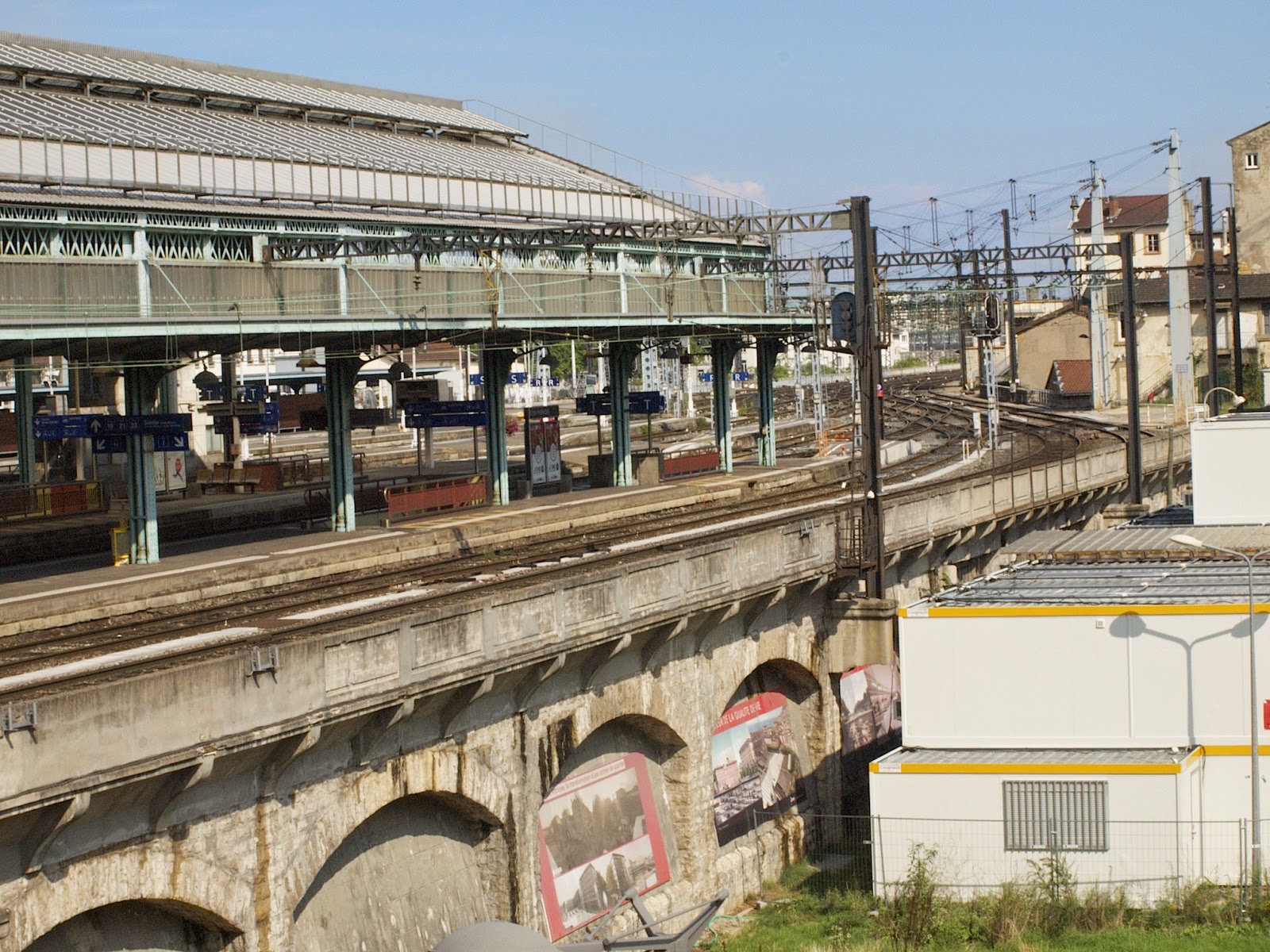 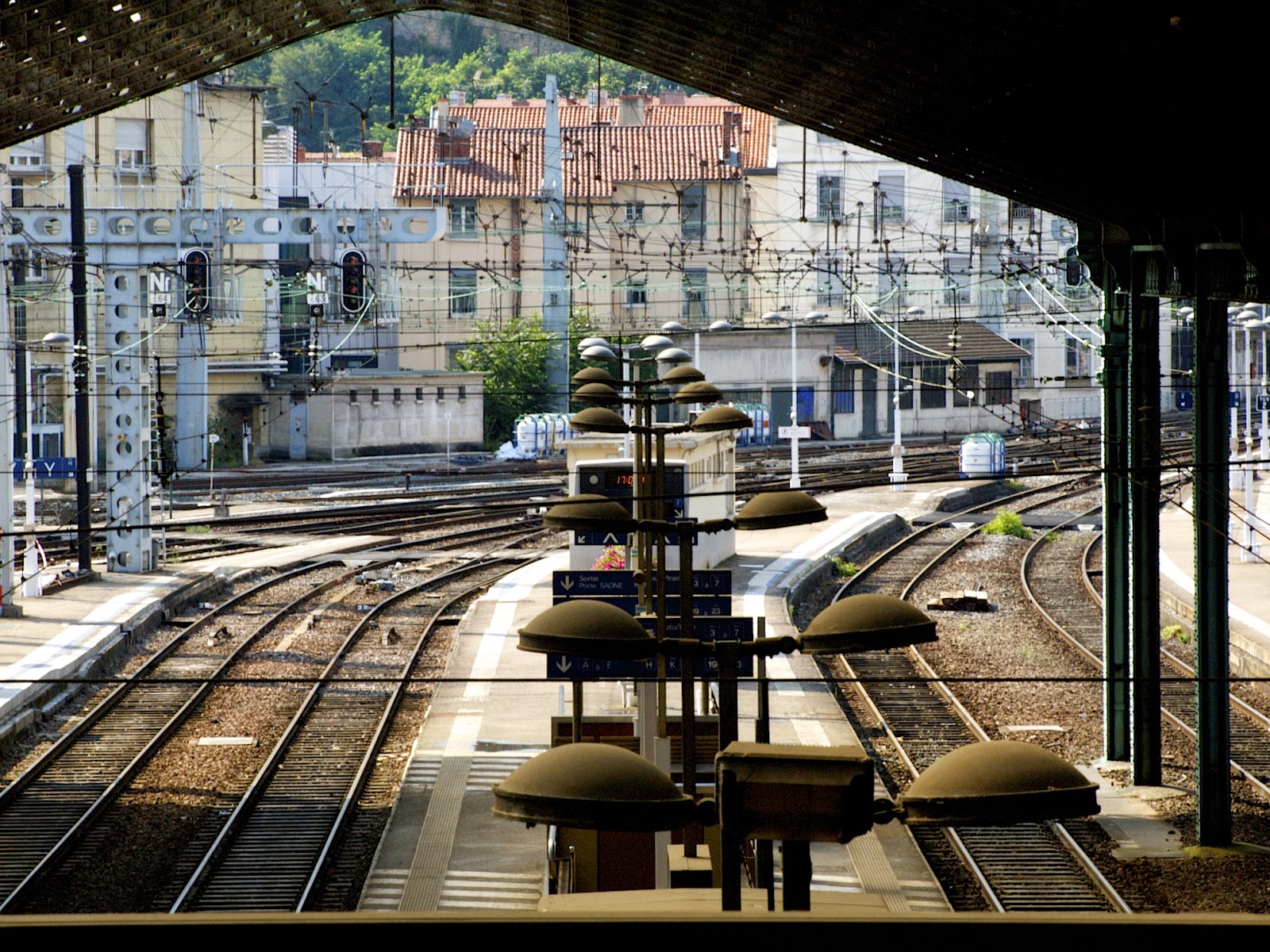